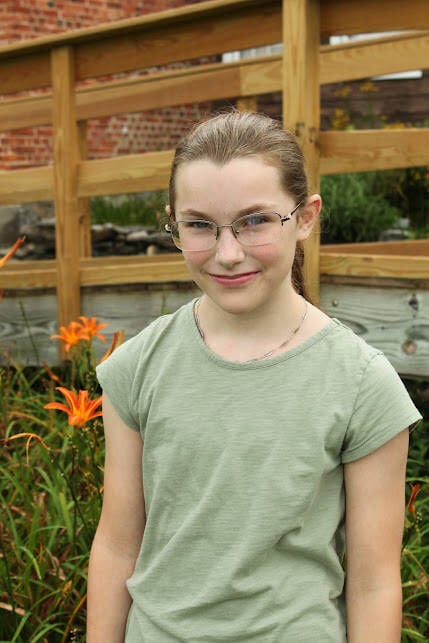 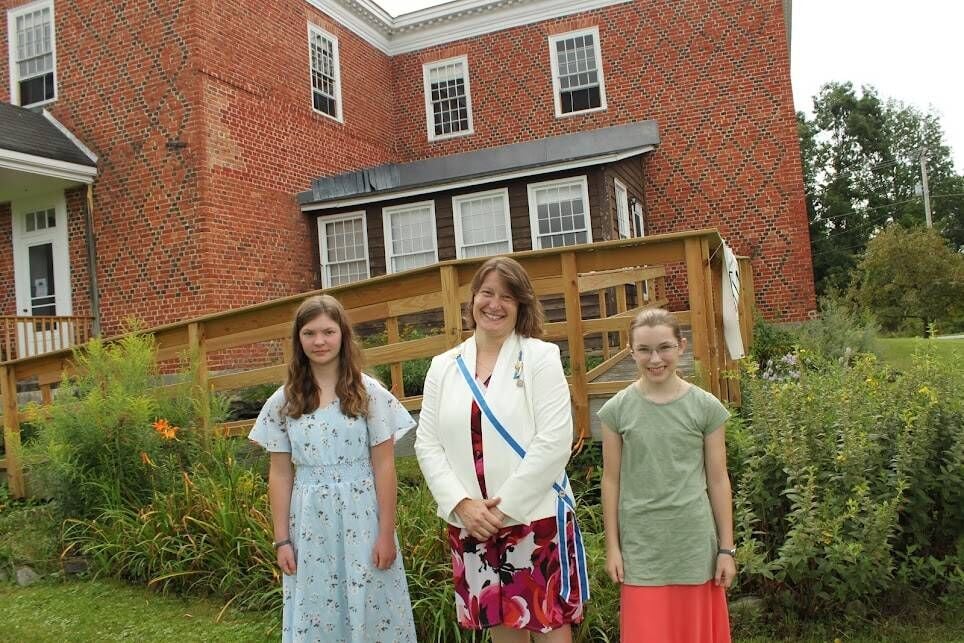 The Vermont State Society of the Daughters of the American Revolution (DAR) had an exciting result for its 2020-21 American History Essay Contest on the topic of the Boston Massacre.

Erica Herrmann, a homeschooler from North Concord, who submitted her essay to St. John de Crevecoeur Chapter (Caledonia, Essex and Orleans Counties), won second place at the national level for the sixth grade. Her essay is entitled, “The Boston Massacre: Extracts from the Diary of Hope Peterson.” Erica was also the Sixth Grade Vermont State winner, and the Northeastern Division winner.

Rachel Herrmann, Erica’s sister, was selected as the Eighth Grade Vermont State winner, for her submission entitled “The Boston Massacre: An Important Decision.” The Herrmann sisters read their essays at a meeting of DAR members in Addison, at the General John Strong DAR Mansion, on Aug. 14, where Vermont DAR Regent, Catherine Brodeur-Johnson, presented the sisters with a certificate, pin, and monetary award.

Each year, DAR organizes the essay contest, and the topic, “The Boston Massacre”, was chosen “to mark the 250th anniversary of this pivotal event that led to the American Revolution,” wrote Catherine Bue-Hepner, national chair of the American History Committee, in a letter congratulating Erica on her achievement. Erica also received a book and monetary award.

When asked about her writing process for the high-ranking essay, in a contest receiving over 20,000 submissions nationwide, Erica stated: “I got a lot of really good sources and decided to write from a loyalist point of view because most Americans would look at it from the Patriot point of view, and I wanted to be different and get the other side of the story.” She wrote the draft, initially finding it was too long for the 1,000-word limit per contest rules. Over the next few days, she continued to edit the essay and cut it down until she had exactly the right number of words.

Billie Eilish urges people not to eat turkey at Thanksgiving

8 History-Making Moments (and Muppets) From the ‘Sesame Street’ World

Cary Elwes wants The Princess Bride to be left alone

A key to the Herrmann sisters’ success in writing, stated Ellie Gebarowski-Shafer, Vermont State Chair of DAR’s American History Committee, has been participation in Classical Conversations, a Christian homeschool community, and the Institute for Excellence in Writing. “The [IEW] program teaches ways to dress up sentences and different writing techniques” that the girls have learned over the past few years, said their mother, Heather Herrmann.

Erica also takes pleasure in learning about American history, particularly the 19th century. “People were more self-sufficient then. They didn’t depend on electrical appliances.” Overall, Erica is glad that the times have changed, especially with regard to historical clothing fashions. “I cannot imagine wearing three layers in the summer!” she said.

The Daughters invite all interested fifth through eighth-graders to submit thoughtful and engaging American History essays to their local DAR chapter (there are 13 chapters in Vermont). The 2021-22 topic is the Tomb of the Unknown Soldier, in celebration of the monument’s 100th anniversary. DAR also has a new high school essay contest, called Patriots of the American Revolution. Details can be found at dar.org, through a local chapter, or by contacting Gebarowski-Shafer at elliegshafer@gmail.com.