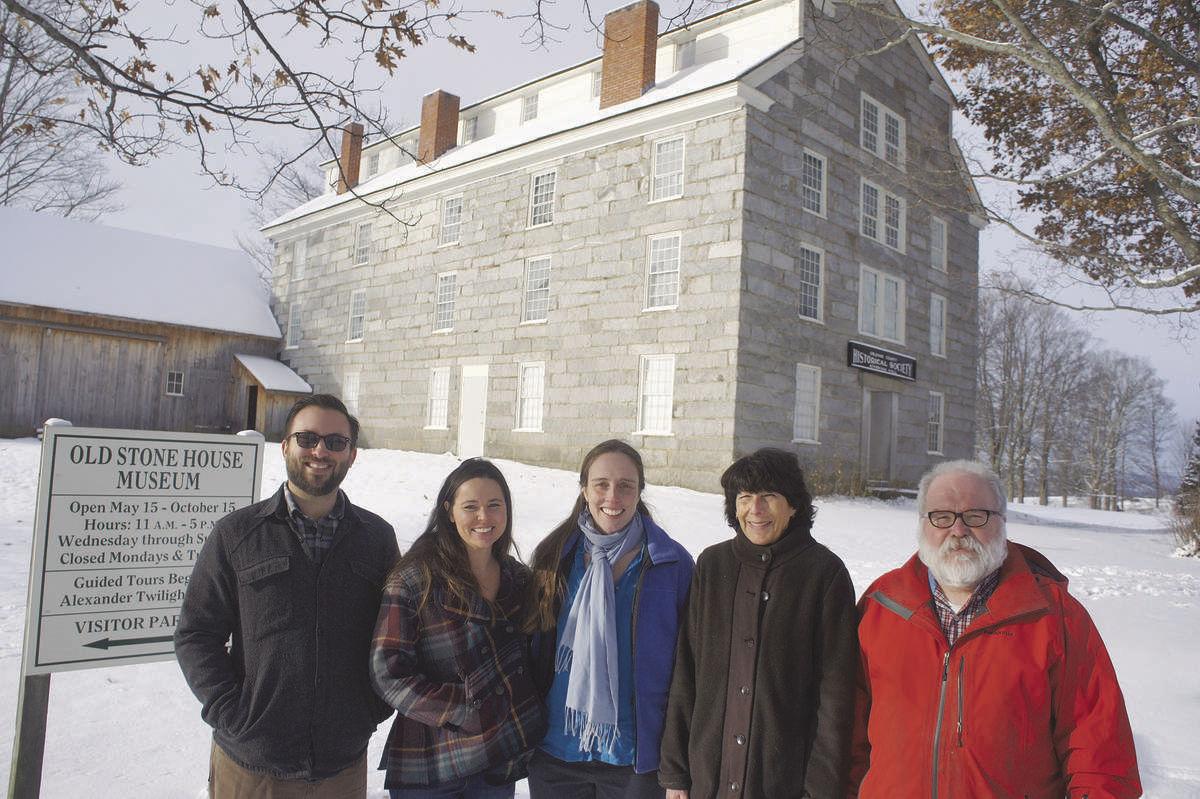 In this file photo, director of the Old Stone House Museum, Molly Veysey (center) poses in front of the museum with the core staff of the museum. From left to right are Walter Parenteau, its new bookkeeper and volunteer coordinator; Dayna Drake, Administrative Assistant; Ms. Veysey; Leslie Rowell, librarian and archivist; and Bob Hunt, Collections Manager. 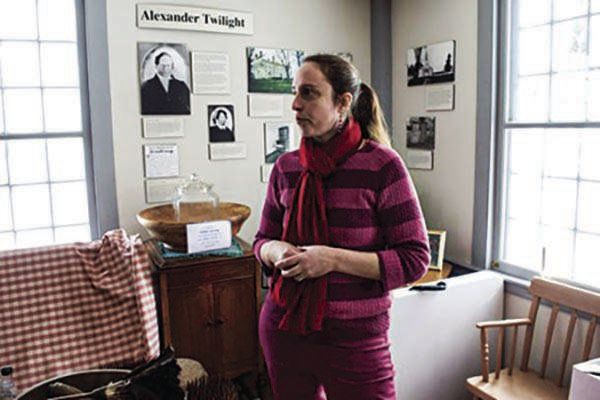 Molly Veysey, director of the Old Stone House Museum in Brownington, speaks about the legacy of Alexander Twilight in this file photo from February 2020. (Photo by Justin Trombly/VTDigger) 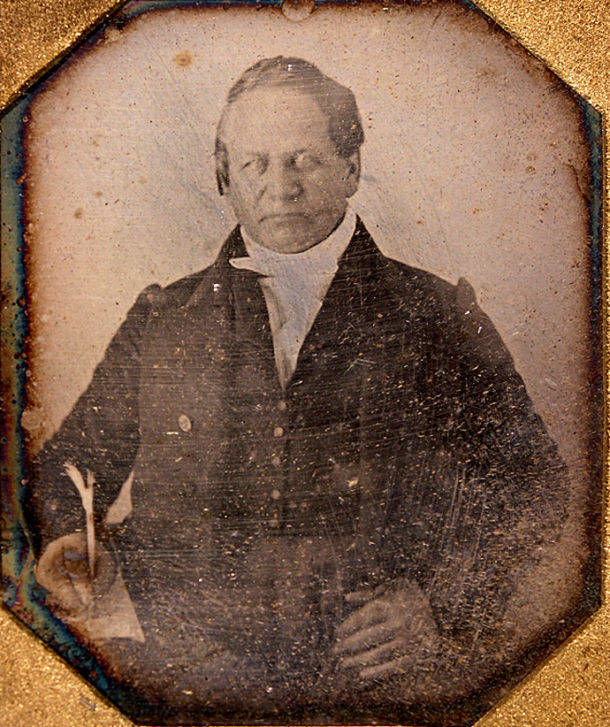 A daguerreotype of Alexander Twilight. 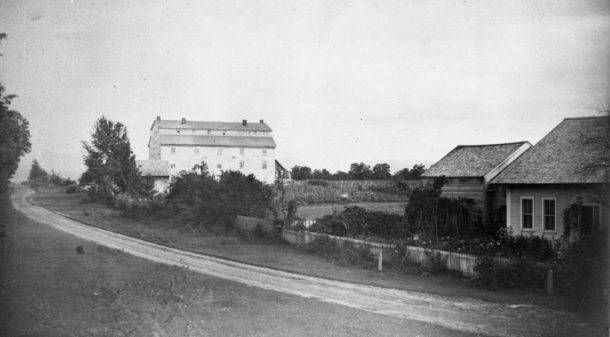 In this file photo, director of the Old Stone House Museum, Molly Veysey (center) poses in front of the museum with the core staff of the museum. From left to right are Walter Parenteau, its new bookkeeper and volunteer coordinator; Dayna Drake, Administrative Assistant; Ms. Veysey; Leslie Rowell, librarian and archivist; and Bob Hunt, Collections Manager.

Molly Veysey, director of the Old Stone House Museum in Brownington, speaks about the legacy of Alexander Twilight in this file photo from February 2020. (Photo by Justin Trombly/VTDigger)

A daguerreotype of Alexander Twilight.

Twilight is the charismatic progressive African American educator, minister and legislator that designed and built the monumental granite edifice in the Brownington Historic District after which the Museum was named.

On April 24, 2020, a concurrent resolution sponsored by Senators John Rodgers and Robert Starr and Rep. Vickie Strong will be read at the Vermont State House. The resolution will designate Wednesday, Sept. 23, 2020 as Alexander Twilight Day in Vermont.

Several celebratory and educational events are scheduled during the museum season culminating with Alexander Twilight Day at the Old Stone House in Brownington on Sept. 20. The Museum invites the public to join them in celebrating the 225th anniversary of the birth of this remarkable man.

Born on Sept. 23, 1795, Alexander Twilight graduated from Middlebury College in 1823, becoming the first black graduate of any American college or university. In 1829 he was hired to be principal of the Orleans County Grammar School and was minister to the Brownington Congregational Church. In 1836 he was elected to the Vermont House of Representatives, becoming the first African American to serve in a state legislature. Under his leadership, the Orleans County Grammar School thrived as a co-educational institution attracting both boys and girls from throughout New England who came from as far away as Boston and Montreal. Between 1834 and 1836 Twilight designed and built a four story granite dormitory, which he called Athenian Hall.

Twilight’s father, Ichabod was born in Boston in July 1765. Both he and Alexander’s mother Mary were free and mixed race, most likely of African slaves and English colonists. Ichabod served in the Revolutionary War in a New Hampshire regiment and later moved with his family to Vermont where he and his wife were listed as “the first Negroes to settle in Corinth” where they bought property, moving from Bradford on November 28, 1798.

Typical for children of his class, Alexander began working for a neighboring farmer when he was only eight. Reading and studying mathematics while performing farm labor, he was able to enroll in the Randolph Orange County Grammar School in 1815 at the age of 20. He enrolled in Middlebury College in 1821, graduating as the first known African American to receive a degree from any institution of higher learning in America in 1823.

In 1826 Alexander Twilight married Mercy Ladd Merrill from Unity, N.H. and taught in both New York and Vermont before assuming his position as principal at the Orleans County Grammar School. In addition to acting as minister for the Brownington Congregational Church, he led worship services and delivered sermons in numerous other churches. In 1847, he relocated to Quebec where he taught briefly. However, without his leadership the Orleans County Grammar School experienced declining enrollment. He was persuaded to return to Brownington where he resumed duties as both teacher and pastor. In 1855 Twilight suffered a stroke and retired. He died on June 19, 1857 and is buried along with his wife Mercy in the Brownington Church Cemetery.

Listed in the National Register of Historic Places, the Old Stone House Museum was established by the Orleans County Historical Society and has been operating as a museum since 1926. It has now grown from one building to become an impressive historic site with seven restored buildings and three neighboring structures, all dating from the early 1800s. Dedicated to its mission to preserve, educate and inspire, the Old Stone House Museum annually attracts nearly 10,000 visitors from across the country and abroad.

Education has long been a cornerstone of activity in Brownington. The former granite dormitory is not the only historic building at the Museum to tell the story of progressive education and diversity. Twilight’s 1830 Federal style home houses his books and letters, along with letters from his students, in an archival vault. Further up the hill an 1831 Federal-style Hall House stands as a testament to Samuel Reed Hall, a recognized pioneer in progressive education. Hall founded America’s first teacher training college in 1823 in Concord, Vt, invented the chalkboard, and published the first teacher-training textbook in 1829.

Through unique educational programs that use select items from its permanent collection as teaching tools, the Old Stone House Museum embraces hands-on, experiential learning as a way of connecting individuals to a way of life that still has much to teach us. Notable past activities have included a barn raising with area vocational students and a tree trimming and replanting project that was incorporated into the 3rd-grade science curriculum at the Brownington Elementary School. A thriving adult education program teaches such traditional crafts as blacksmithing, rug hooking, stone wall building, and tree pruning. Spring and fall Field Days for area schools, as well as its summer “Time Travelers Day Camp” emphasizes hands-on craft activities, theatre, and the scientific exploration of the garden and grounds.