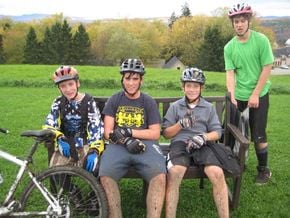 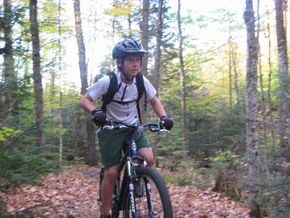 For Connor, an eighth grader at Good Shepherd Catholic School in St. Johnsbury, a steady diet of wiffle ball fed his early love of sports: "I played all the time when we lived in Oklahoma. I was around big kids playing baseball and soccer all the time."

Says Connor, "I do prefer team sports ... I do like individual sports, too. With a team, it's kind of like having another option; it's not all you. There is strategy and passing, thinking about what you're going to do to benefit the team."

Connor's favorite sport is soccer: "I like how the game works. It's not a bajillion different plays like some sports. I just really like playing it." He plays midfield for a satellite team, Lightning, of the Granite State Youth Soccer League. Connor's team, under his dad's coaching, practices locally and travels to scrimmage other teams in the league.

Playing with the Lightning and particularly practicing alongside the Academy soccer team give Connor a performance boost: "When I practice with the Academy, I feel small. And slow. It makes you play faster because there's no way otherwise you're going to dribble through three people and score."

Connor is able to fit lacrosse into his schedule, too, and plays midfield for the St. Johnsbury Rec Department team, his first year playing lacrosse.

"I like lacrosse because it is more of a contact sport. It's fun because of how fast the game moves. It's like a really sped up game of soccer," he said.

Connor looks forward to mountain biking this summer on the Kingdom Trails, and in the winter, likes to ride at Burke. Connor began snowboarding six years ago, and he likes "powder days, riding in the park, front flips, riding off cliffs and down rails. My dad is more nervous about it than my mom, because she does gymnastics."

Connor draws inspiration from professional soccer and his favorite team, FC Barcelona, and player, Lionel Messi. Connor saw the New England Revolution play, and even got to see the United States play Spain at Foxboro last year (Spain won). He looks forward to continuing sports at St. Johnsbury Academy, particularly soccer. He takes potentially having his dad as a teacher or soccer coach in mellow stride: "I'm used to it," Connor says.

Connor's pursuits are not without adversity. He has Chron's disease, a chronic inflammatory disease of the intestinal tract, which was difficult when he was younger, because "the doctors had no idea what was going on." The diagnosis, followed by a gluten-free, dairy-free diet, and an immunosuppressant, brought relief and symptom management to Connor, allowing him to maintain his high level of activity.

Andrew Burroughs, Connor's classmate and friend, observes firsthand Connor's natural inclination toward constant motion: "Connor is the only kid I know who actually spends mostly all of his time outside, with his little brother in the woods, always doing something."

Connor McCarthy's advice to his peers echoes that reflection: "It's easier to stay active than to start getting active ... keep going."

Some see irony in virus' impact on Mayflower commemoration

Small plane crashes on farm; only minor injuries to pilot

Ranked voting in Maine a go for presidential election