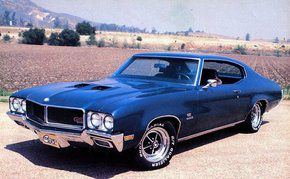 It all started with an idea, a corporate vision and then a plan to make a big splash on their 50th anniversary. It was 1953, and General Motors introduced three extraordinary convertible cars in celebration; the Oldsmobile Fiesta, the Cadillac Eldorado and the Buick Skylark. And so began the legend of the Skylark that ran through seven different production generations that stretched until Dec. 4, 1997. With far too many model styles and designs to mention, I'd like to focus on my absolute favorite; the legendary 1970 Buick Skylark GS.

Mid-sized GM cars in the late 1960's were hampered by GM's edict that no engine larger than 400 cubic inches could be factory installed. This ban was lifted in 1970, paving the way for some of the fastest cars ever to come out of Detroit. The 1970 Buick Gran Sport, or GS, was a high-performance car stuffed with the optional 455-ci V-8 engine. It was larger than anything Ford had to offer and even edged out Chevrolet's 454-cubic-inch V-8. The only thing bigger was the Cadillac 472 and 500 cid V-8's, and no engine achieved the Skylark's kind of power at a lower rpm, 2800. If all of this wasn't enough, a Stage 1 package could be added that brought a hotter cam, bigger valves and revised carburetor. It was one of the most powerful factory muscle cars of its time. Today, the Skylark GS can hold a price tag of more than $75,000, when the original cost was a mere $4,478. Part of its success was due to its 510 lb ft of retina detaching torque. This was even more than the legendary, dare I say it, street Hemi.

Production numbers were small for the GS, making it a rare find today: The GS 2-door hardtop -- 9,948 cars; the GS 455 2-door hardtop -- 8,732 cars; and the GS 455 convertible -- 1,416 cars. So, just how fast did the GS go? The GS 455 with a Stage 1 could go from 0-60 in 6.5 seconds, a Â¼ mile in 13.8 seconds at a scorching 101 mph. With all this going for it, what happened to the Buick Skylark GS? Rising gasoline prices at the time and an impeding embargo had all manufacturers adjusting their model line ups and engine offerings. Though short-lived, Motor Trend magazine originally called the 1970 Buick Stage One 'The quickest American production car we ever tested.' That just about says it all.

By now you are probably wondering why I chose the Buick Skylark. There are a couple of reasons. Number 1: They are hard to find and they just have everything you could ever want in a muscle car. What's not to like? It has incredible style and speed and enough mind-blowing torque to propel you into next week. And Number 2: I wrote this story in remembrance of my grandmother, the late Joyce Facteau of Lyndonville, who passed away this past week. She owned a Buick Skylark and was an avid reader of my car talk column. Her support and encouragement helped me tremendously in my pursuit of the best, the fastest and the most interesting cars out there. So, here's to you, Grandma, thanks for being there and being so cool.

Cody Facteau is a 16-year old homeschooler from East Burke. He enjoys anything to do with cars, particularly the Classics. He loves Le Mans racing, his favorite TV shows are Gearz with Stacey David & Top Gear (BBC), hobbies are Legos and PlayStation. Career goals? What else, cars!