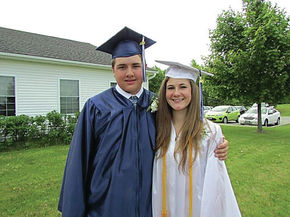 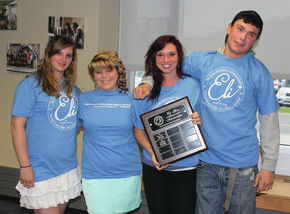 The scholarships are given in memory of Eli Goss, who was a senior at United Christian Academy (UCA) when he passed away in a motor vehicle accident on September 17, 2010 on the Gore Road in Morgan.

"Caring about students with heart..." The Eli mission is to expand scholarship opportunities to include students who did the work, balanced academics, sports, friends and family and may not necessarily have a high grade point average, but were courageous in their attempt and caring in their relationships. Eli is remembered for his many friendships that built a bridge between UCA and NCUHS, and in many ways helped to break down social walls and encourage support between the two schools.

An ice fishing tournament organized by the Student Forum at North Country Union High School (NCUHS) is an important source of funding for the fund. This past winter the tournament contributed $2200 to the Eli Goss Memorial Scholarship Fund. This amount includes many generous contributions from members of the community.

UCA parents and students have also been raising funds throughout the year for the scholarship fund in memory of their varsity soccer and basketball player Eli Goss. They raised over $1,000 this year.

In the past three years the Eli Fund has awarded 17 scholarships of $500 each to students at UCA and NCUHS. This year plaques were presented to each school with all of the recipients' names on them.

Contact Stephanie Goss (802) 673-8931 for information or go to www.eligossmemorialfund.com where you can see photos, make a donation, or order a sweatshirt from the fishing tournament. Donations of caring may also be mailed to 262 Campbell Rd., Newport, VT 05855. Checks can be made payable to The Eli Goss Memorial Fund.

Teen charged with gun possession for a 2nd time

Connecticut inmate is fifth to die this month of COVID-19

Hands Around the Capitol canceled because of safety concerns