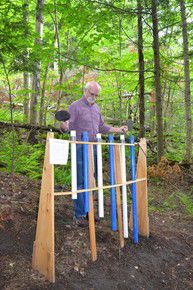 Teacher Steven Light plays the tubes with a ping-pong paddle. Other instruments can be played with mallets or the bottoms of rubber flip-flops. Students designed and created all of the instruments, including the racks that house them and the bracing that holds them up. 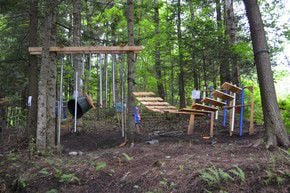 The musical playground includes chimes made of steel pipes, a xylophone (which is also a functional hammock) made of wood, bongos made of plastic containers and tubes made of PVC pipe. All of the instruments are built on the pentatonic scale, which according to Steven Light is “a five note scale which is more suitable for little kids to play, or for any non-musician.”

Teacher Steven Light plays the tubes with a ping-pong paddle. Other instruments can be played with mallets or the bottoms of rubber flip-flops. Students designed and created all of the instruments, including the racks that house them and the bracing that holds them up.

The musical playground includes chimes made of steel pipes, a xylophone (which is also a functional hammock) made of wood, bongos made of plastic containers and tubes made of PVC pipe. All of the instruments are built on the pentatonic scale, which according to Steven Light is “a five note scale which is more suitable for little kids to play, or for any non-musician.”

After teaching music at Hazen Union High School for 30 years, Steven Light is set to retire. He's had a hand in the musical education of two generations of students, but it may well be his last year at the school that will leave the most indelible mark.

When band students came returned to his classroom last September, he had a proposal for them: let's create a musical playground.

Light's inspiration was one of his own college professors who had created a "xylophone-kind of instrument" in the woods. "Every once in a while on campus you'd hear these weird sounds coming from the woods and it was neat!"

His students chose a spot near the school entrance to the Hardwick Trails. The 14 students then divided up into groups to decide what they would create. "I kind of held my breath and thought, Are they all going to make the exact same thing?" said Light. "But it worked out pretty well. It's well-rounded."

"We did a little bit of a unit on the physics of sound and how do you tune PVC pipe to these specific pitches," Light said. The answer? "By cutting it with a hacksaw!"

The project involved a lot of problem solving. "It was a learning process for all of us."

For instance, they learned that while they could reliably predict the tone of a PVC pipe at a certain length, the same was not true of wood, depending on how many knots were in the board.

"Some of the kids were at a level of frustration -- it was good they were non-violent kids because they had pieces of plastic pipe in their hands!" laughed Light.

All told, the project provided an excellent real-world demonstration of how their school subjects intertwine. "It was nice that it combined needing to know physics and needing to know a little bit of woodworking or using some tools at least. And then design also. They designed the cases, which are very simple, but they had to figure out how big do the holes need to be, how much does it need to be braced?"

At the end, they authored descriptions of their instruments and created signs to the playground.

They had a very limited amount of time to work on the project -- approximately two hours a week. "It took pretty much the entire fall," said Light. "I think we finished mid-October."

The musical playground has just survived its first winter. All of the materials were chosen specifically for their weather-worthiness, but students still checked on it regularly. "They all got very vested in the project, which was really exciting," said Light. "They were really worried that it would be vandalized and they didn't want it to be vandalized. Which is a valid point, you know. You have a thing out in the woods. That you hit. With sticks."

Although Light got misty when he talked about not returning to his classes in the fall, he's happy with the impact this project had on his students.

"All of them really tuned into the fact that everything makes sound, that everything makes a pitch," he said. "Somebody would hit a rack that they store their music on and they would go, 'Look it rings!'" He said his favorite part of the process was "that feeling of experimentation and discovery."

Maine's youth deer hunters ready for their day in the woods