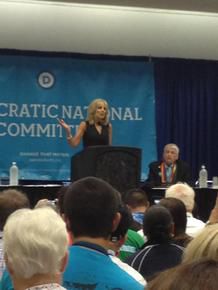 Robert Lemnah, an Lyndon Institute senior, is shown with Shap Smith, the Vermont Speaker of the House, at the Democratic National Convention. 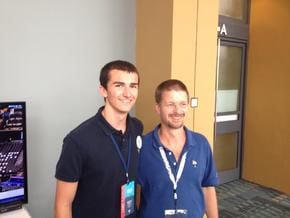 Robert Lemnah, an Lyndon Institute senior, is shown with Shap Smith, the Vermont Speaker of the House, at the Democratic National Convention.

When Lemnah got to the Convention, he went to a caucus with a friend of his from Boy's Nation. He said they had the opportunity to hear the vice president's wife, Jill Biden, speak. After the caucus, he said, he bumped into Vermont's Speaker of the House, Shap Smith.

"I was one of the many thousands who lost their credentials due to the location change of the speech, but I still decided to fly down because I wanted to be there!" stated Lemnah in an email about his recent experience. "I wanted to be at this historical event that would help shape the future of our country. By still being at the Convention that day my friend and I were able to view the speeches in a viewing party of about 1,200 people. The atmosphere was incredible and I will never forget the amazing feeling of unity and pride for our country that took over the room as the speeches progressed."

Smoke inhalation complications cause of death for Tony Hsieh

Connecticut gives $9M to arts groups to help during outbreak

SBA asks Mainers to shop small in 2020 due to pandemic