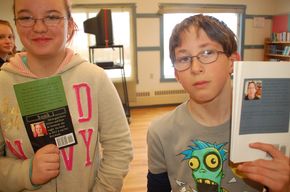 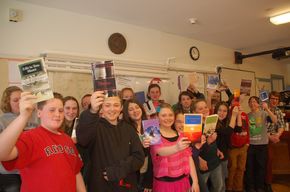 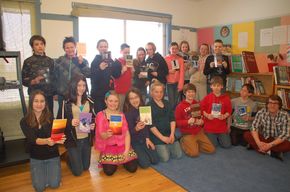 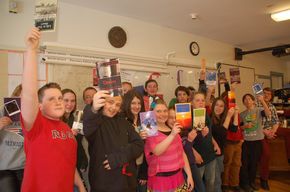 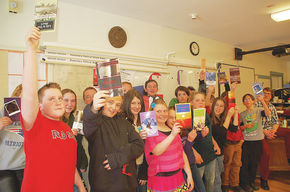 NEWARK -- There are nearly two dozen new authors attending Newark Street School, all their books available on Amazon.com, including titles about a down-on-his-luck man that wins the lottery, a pair of friends who become dirt bike legends, a family in trouble that is saved in the end for a happy ending, and many more.

Welcome to the middle school language arts classroom of teacher Matthew Smith, in which students in grades 5 through 8 have recently become published authors, taking part in a month-long novel writing program called NaNoWriMo (National Novel Writing Month). According to an enthusiastic and proud Smith, his students "cranked out amazing stories and incredible word counts. Kids who've never written more than a page for anything produced 80-page novels," he shared. "Some kids wrote books over 100 pages long."

The student books are available on Amazon.com, and students earn royalties for titles ordered from the online book seller, with last week's total already at $68 for the first week of official online book sales, reported Smith. The novels are just in, and the books are professionally done and a deep source of pride for the young authors.

Smith said he learned of the one-month novel writing program and publishing opportunity through Amazon on a blog for teachers, and thought the project would be a great one for his students. Students even got to drink coffee -- decaf -- donated by Green Mountain Coffee Roasters while writing, to add the authentic writing environment. They spoke excitedly recently about what it was like to produce real, published novels in such a short window.

Kobe Bedor, 11, a sixth grader, wrote a book titled "Dream," about a man who is at the end of his luck, on the last day of his job that's ending, when he strikes it rich and wins the lottery. He buys a mansion, but he ends up losing everything -- but ends up finding love and getting married and having two children, all in 37 pages. Lesson learned? It's not all about the money.

Robin Keon, 10, a fifth grader, wrote an adventure about a family's difficulties and separation, and their eventual happy ending after a long struggle, in a novel she titled "A Long Way From Home."

Before students sat down to craft their novels, they were thinking of word counts that turned out to be a little overly ambitious, noted Smith. A few students, he smiled, estimated totals like 260,000 words. In the end, the students still did crank out tons of words. Ellen Tierney, an eighth grader, said she wrote 16,000 words in a month.

Cameron Messier, 11, a fifth grader, wrote a book about a mutant engineer who is out to get the monster that killed his family and friend. This mutant engineer has a robot dog and there are dragons that come into play, too, in a novel he calls, "Revenge."

In David Parisi's book "Every Racer's Dream," two friends head off for a national dirt bike competition, only to find an enemy at the big race in Florida. David is 11 and is a fifth grader.

Students used online tools to design their book jackets, select artwork and type faces, and professionally put together the fronts and backs of their books, noted their teacher. The books were worked on during the fall, and after the writing time came editing, which was hardest, a few of the young authors reported. Students read one another's works and helped encourage one another during the creative process. Some students lost half-written books in computers and cars and had to start from scratch, they said, just like in the real world.

"Writing a novel is a lot more challenging than it looks and it takes many, many skills," said Paul Dunbar, 11, a sixth grader.

Alicia Goss, 13, a seventh grader, all smiles, said that this is the first time in her life she has written more than a whole page. On the back jacket of her book, where a picture of her shows her pink hairstyle, she talks about how this book is her first, a debut, and there will be others to come now.

Looks like that month of writing -- and, oh yeah, the coffee -- has given birth to some creative juices at the Newark Street School that won't be stopping anytime soon!