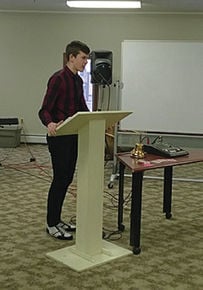 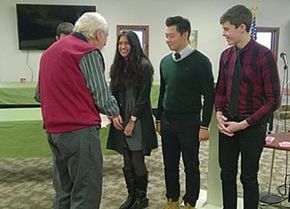 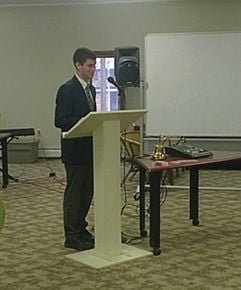 ST. JOHNSBURY ROTARY CLUB SPEECH CONTEST -- Jim Jung, chairman of St. Johnsbury Rotary Club's Speech Contest Committee, presents awards (below) to the four students who competed in the annual Speech Contest held during the club's weekly meeting Nov. 17. Shown with Jung are, from left, Daniel Byford (hidden), Stephanie Beltran, Val Kim and Nikita Stepura, all students at St. Johnsbury Academy. Their teacher, Janet Warner Ashley was also in attendance. Each year Rotary District 7850 (St. Johnsbury Rotary Club one of the 42 clubs in this District) sponsors a Speech Contest. The contest starts at the club levels in the fall and encourages local high school students to prepare and present a five-minute speech on a limited set of Rotary topics selected each year, such as "The Four Way Test," "Service Above Self" and the current year's Rotary International theme, "Light Up Rotary." Progressive competitions are held at the assistant governor's area and District levels to determine the final participants to compete in the spring at the finals. Winners at each level receive financial awards. Daniel Byford (shown above) spoke of the need for organized baseball in the three central American countries -- Niagara, El Salvador and Panama; Nikita Stepura gave a speech wishing for a perfect political system; Stephanie Beltran discussed the importance of bettering education in developing countries; Val Kim addressed the need for clean water around the world. Stephanie was chosen as the winner and received $100. The next step is for the assistant governor of the Club to arrange a "speech off" with the Lancaster and Wells River/Woodsville Rotary clubs. The winner of that competition heads to the District meeting to be held at Dartmouth Hitchcock in West Lebanon, N.H. in April for the semifinal. The two finalists perform at the District 7850 Conference in Stowe in May. All the students competing at the St. Johnsbury Rotary contest were presented with a gift certificate to Box Car & Caboose in St. Johnsbury.