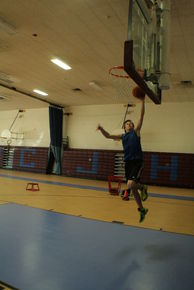 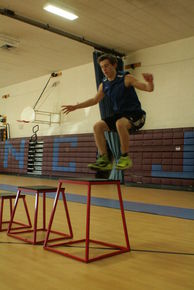 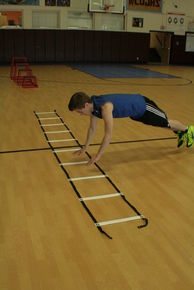 DERBY - AJay Warner works out like it's his job.

Seriously. The North Country Union Junior High School eighth grader spends between 30 and 40 hours per week working out. That's one of the many reasons that his physical education teachers, Christiane Brown and John Gunn chose him to be the school's Get Fit Student this year.

"AJay truly cares about his health. It's apparent not only in our PE classes but also outside," Brown said.

AJay, who lives in Derby, wears extra weights during other activities to make it harder and to build more muscle, and the results show, Brown said.

In jumping exercises, kids are asked to jump from a standing position on top of a series of steps, from a short jump to a really tall jump. The tall one is so hard Gunn usually doesn't allow kids to even try it for fear of injury, but in AJay's case, "He instantly flies up like Superman."

But, there's more to it. "He's a great kid. He makes people around him better, which is always a great quality to have," Brown said.

AJay likes to play basketball, run track (long-distance is his favorite), and jumping hurdles to prepare for football. He and his family -- who are all fitness-driven -- also kayak and hike together.

"We've gone up Mt. Pisgah four times, and every time we've had to run down the mountain because it was pouring on us," AJay said.

The whole family -- grandparents included -- like kayaking on the Clyde River, but one time his grandparents got stuck behind trees and he had to go help them.

AJay, who did not stop moving during his interview with the Record, said his family avoids soda and tries to eat as healthfully as possible. That's the difference between other fit kids at the school and AJay, Gunn said. He talks about proper nutrition and follows through.

"When you eat a lot of unhealthy foods, your body kind of has this need for it," AJay said.

During Career Day, Tyler Tinker was there as part of his fitness business and had the kids race. AJay said he was wearing his dress clothes, because his team had a basketball game that night, and then he slipped and fell during the races. He still came in second place.

AJay expands his ideas of exercise to include yoga and balance training. "Balance is a key aspect of being athletic," he said.

AJay likes agility and range of motion training, as well as what Gunn calls "explosion kind of exercise," like jumping vertically from a kneeling position to one's feet. His exercise routine is on a three-day rotation, and he takes long runs at least once a week to keep loose. He does vinyasa yoga as well, which uses one's body weight for fitness.

Gunn said AJay understands that education is the first piece, while a lot of other kids just think about play.