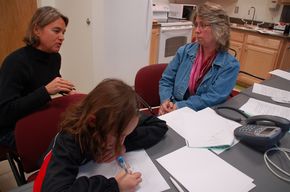 Jill Mathers and her daughter Aleta, of Newark, are co-authors of House Bill 379, which proposes banning smoking in public parks and forests. Mathers speaks with state officials during a conference call at the Tobacco Programs building at Northeastern Vermont Regional Hospital. Rose Sheehan, Tobacco Programs Coordinator, is at the foreground. 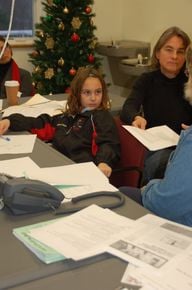 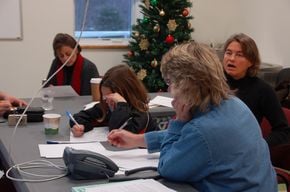 Jill Mathers and her daughter Aleta, of Newark, are co-authors of House Bill 379, which proposes banning smoking in public parks and forests. Mathers speaks with state officials during a conference call at the Tobacco Programs building at Northeastern Vermont Regional Hospital. Rose Sheehan, Tobacco Programs Coordinator, is at the foreground.

ST. JOHNSBURY -- A bill aimed at banning smoking in Vermont's state parks and forests is gaining support from a group of advocates through the Tobacco Programs at Northeastern Vermont Regional Hospital.

The bill was drafted by a Newark mother and daughter team, attorney Jill Mathers and her daughter, Aleta. The pair were invited to take part in a conference call with prevention advocates from community coalitions across the state, as well as officials from the Vermont State Parks and the Vermont Department of Health.

A statewide public relations campaign will kick off this week to try to alert the media across Vermont about House Bill 379, which is in committee and has not come off the wall yet, said Jill Mathers. She told those on the conference call about how she and her daughter have had to leave public places, including a beach at Lake Willoughby or even mountain peaks, due to the smoking of others.

Some of those on the phone were sympathetic, but proposed a possible compromise, to have areas where smoking is not permitted, such as on trails, or peaks, and areas where the public gathers in numbers, such as the beach or near snack areas, and to scale back the language which now proposes to ban smoking in all public parks and forests in Vermont.

The group worked together on the conference call on both short-term and long-term goals. Getting the bill off the wall is the first order of business.

Rose Sheehan, the tobacco programs coordinator at the Northeastern Vermont Regional Hospital, added, "We need to get (the bill) off the wall so that people are discussing it. ... Long term we want to have it passed and we will have smoke-free forests and state parks in Vermont."

Sharon Mallory, a community tobacco control specialist with the Vermont Department of Health, cautioned the coalition and prevention workers during the conference call about being advocates, not getting involved in political lobbying. She said people can support and advocate for the health benefits of such a bill, but that it was a fine line between advocating and lobbying, and the professionals in the field needed to be sure they stayed on the side of advocacy.

Mathers and her daughter can be as involved as they want in lobbying for the bill, of course, she said, and the mother-daughter pair will be the face of the campaign that goes state-wide to try to garner more attention and support. People will be urged to contact legislators to get the bill off the wall, and to work on its compromise and hoped-for passage.

The mother and daughter have been visiting schools in Lyndon, Sheffield and Newark, presenting their work on the bill and teaching children about how an idea like theirs -- to have no smoking in place in public parks and forests -- can go from a wish to a law. One idea of the conference call was a letter writing campaign.

Mathers, speaking to those on the conference call, said she and Aleta were once hiking and they got to the top of a mountain and the air was fresh and beautiful until another hiker came along and lit up a cigarette.

One thing the group is researching is what other states have done. Sheehan said she would try to have a state official from Maine on the phone for the next conference call for efforts on the bill. Maine has put into place bans in certain public places, but their ban is not as all encompassing as what is proposed in the House Bill 379 language.

Some ski areas, including part of Burke Mountain, are located partly on state lands, noted Mathers. She said that would mean that parts of Burke would be smoke-free if the law passes, but the privately-owned areas would be the ski resort's call.

After listening to Mathers talk about her and her daughter's experience on a mountain peak, Nate McKeen, Chief of Park Operations for Vermont State Parks, said, "That's a great picture ... that makes much more sense than just a blanket statement that all state forests (ban smoking) ... that crystallizes it," that if a smoker's behavior is going to ruin someone else's experience, that a policy change may make sense.

The proposed bill could also impact snowmobilers, noted some on the conference call.

Mathers said she would be amenable to compromises, as suggested during the conference call, and is hoping that by joining forces with community coalitions and across the state, that enough attention may come to her proposed bill that it will at least come off the committee wall and be discussed.

A handout given to those at the NVRH Tobacco Programs center at the recent conference call features a color photo of Willoughby Gap. The flier states that The Tobacco Coalition of Caledonia and Southern Essex Counties supports the bill brought forward by Jill and Aleta Mathers, noting that "Healthy Communities Start with Good Health Policy."

The bill was introduced earlier this year by legislator Howard Crawford of Burke.