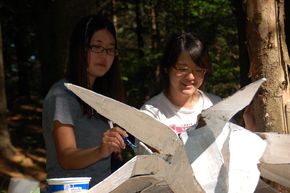 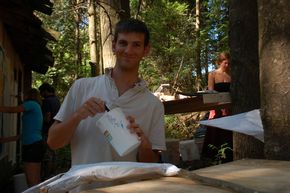 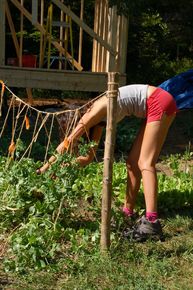 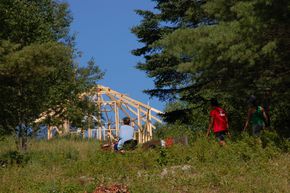 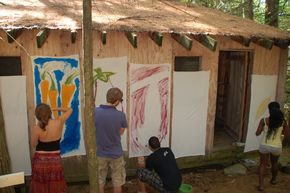 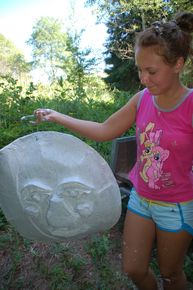 WEST BURKE -- If connecting young people from different continents and giving them a sense of understanding and shared purpose can change the world, then Volunteers For Peace is fulfilling its vision.

For nearly a month this summer, about two dozen young people, college students from France, South Korea, Spain, Italy, Canada, Morroco, Russia and Germany, as well as Vermont and other parts of New England, came together at Oscar's Farm. They were growing vegetables and building things such as a gazebo atop a scenic crest with a view.

The volunteers also shared views and dreams for a better world.

The farm, named for owner Gary Schy's late grandfather, is on a country road in West Burke -- on about 40 unspoiled acres -- dotted with nothing but wildflowers.

Schy, who lives in Montpelier, said the site has opened a number of times to visiting groups for educational and environmental programs, but this summer's visit by the Volunteers For Peace group was a first.

Volunteers For Peace is a Burlington-based nonprofit, U.S. Program Coordinator David Arndt said. Arndt said the group learned of the farm being open to such programs and contacted Schy. Both groups have a focus on world peace.

The mission statement for Oscar's Farm ont its website states: "To expose people to ideas and experiences that create an atmosphere for self development and self enrichment. By helping others better understand themselves and the world in which we live, we believe that humanity will be closer to peace."

Schy said none of the young people visiting had ever built anything before, and he gave them books to study and some tips. And they ended up building a garden building and a gazebo.

One of the volunteers was Matthieu Gadel, 21, from France. He said the group worked together to figure out how to do things such as building something. He has learned much about other cultures, cooperation, teamwork and sticking to a goal.

"At first we don't know, but we figure it out," he said. "It's a very nice place. We learned a lot of skills and it was very nice to be here."

Gadel said he found Vermont to be closer to life in Paris than how the rest of the U.S. may be. For one thing, the emphasis on fresh, healthy, local foods, is something that is very important to Parisians, and to Vermonters, he said, while standing just beside vines of peas.

The student volunteers were 18 to 25 years old, he said.

As the garden's bounty comes in, Schy said the farm will donate to local food shelves, and possibly invite them to come and harvest the fresh vegetables themselves that the students, who left in recent days, spent much of the summer tending to.

Building the gazebo atop a scenic vista on the property together were students from Spain, France and Germany. Jon Elguezabal, 18, from Spain, who this fall will be a college student studying engineering, said he came here this summer "looking for adventure." And, smiling, he said he found it.

For Jolande Schenck, 19, a German college student studying psychology, living and working with people from such diverse backgrounds was a learning experience, she said, and she's glad she spent part of her summer in West Burke.

Pierre Candin, 20, of France, was high in the skeleton of the gazebo and said the sense of pride in completing a structure is something he'll take home with him.

On one of the group's last days together, many of the participants were at work creating huge masks and decorations for a celebration to honor the earth, said Schy.

Youssef Hamdaoch, 32, of Morroco, who runs a program for youth in his country, was one of the only non-students in the group.

"I believe change comes from participating with other cultures," he said of steps toward peace. "If you start to believe in change, you must join other people from other countries and stay with them."

Merlin Christmann, 18, East Montpelier, said meeting people from throughout the world "has definitely been cool," and he plans to stay in touch and take up some of his new friends on visiting them in their home lands.

"I have been changed for the better," he said smiling.

The Volunteers For Peace members who visited the farm this summer were searching for a meaningful way to connect with others, do something to further their global connections, and give back. They said their visions had been fulfilled, and they believed their time here led to deeper understandings of people from other lands as well as more positive connections between them all.

"The volunteers are responsible for developing the land into a farm, constructing buildings, turning soil, weeding, composting, etc.," according to a Volunteers For Peace press release. "The goal of this project is to meet a local need while bringing volunteers together from around the world to increase cultural understanding and build meaningful relationships, working towards a more just and peaceful world. International volunteers will also be lending a hand this summer in Montpelier, Burlington, Tinmouth, Starksboro, Danby and Vershire."

For more information about Volunteers For Peace, international voluntary service or Vermont work camps, contact Frisbee at vfp@vfp.org, or 802-540-3060.