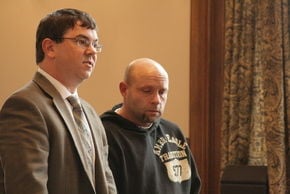 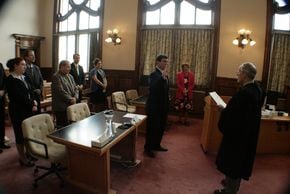 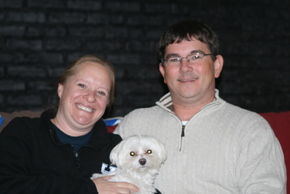 Janssen and Sarah Willhoit, with their canine friend Frankie, at their new home in St. Johnsbury.

Janssen and Sarah Willhoit, with their canine friend Frankie, at their new home in St. Johnsbury.

For many defendants in criminal court, the past dictates the future.

But attorney Janssen Willhoit used a negative experience in his past to catapult him into a position in which he's able to help people charged with crimes.

Willhoit, who works for law firm Willey & Power as a public defender, spent more than five years behind bars after being convicted of felony offenses in Kentucky, his home state, in 2004.

Fast forward to 2013 - after getting an executive pardon from Kentucky Governor Steven Beshear, testifying in the Kentucky Legislature on behalf of prisoners rights, getting admitted to Vermont Law School and subsequently the Vermont Bar -- and Willhoit is doing the work he feels he was meant to do.

"There can be a better tomorrow," Willhoit said.

While Willhoit describes his time in prison as the "pit of misery," he said, "I'm glad it all happened, because it's led me to where I am now."

"I truly feel called to this. And I've been afforded experiences that make me truly suited for this job," Willhoit said during an interview at his new St. Johnsbury home Monday.

Willhoit and his wife, Sarah, are devout Christians, and both give God the bulk of the credit in Willhoit's journey.

"For I know the plans I have for you, declares the Lord. Plans to prosper you and not to harm you, plans to give you hope and a future," Sarah Willhoit said, quoting from memory a verse displayed in their home from the book of Jeremiah.

Willhoit, who also credits his wife and her parents in helping him through this tough time, said a simple saying on a coffee mug helped him put aside the frequent comment he heard from prison staff: "Once a criminal, always a criminal."

That quote is, "What would you attempt to do if you knew you could not fail?"

While Willhoit was growing up, his mother worked two jobs to support the family, but she realized her eldest child had no male role model in his life.

A new pastor at his church became that man, exposing him to experiences that led Willhoit to believe he would become a pastor himself one day.

He was accepted to attend Lexington Christian Academy, and on Oct. 4, 1995, Willhoit was on his way to a chapel service when a garbage truck hit his car.

Initially, doctors told Willhoit's family he would not make it. But one piece of recovery at a time, he went from an induced coma, with a head injury, to eventually no longer needing a wheelchair or colostomy bag.

He began attending Asbury College, where he met Sarah, but after receiving a settlement from the crash, Willhoit began spending like there was no tomorrow.

By that point, he was used to having money, and gladly accepted a job as a broker. Within six months, he was the top broker in his region, for which he thought he'd at least get a raise. When that didn't happen, Willhoit, at age 21, went out on his own.

To get clients, Willhoit started guaranteeing returns. Clients renewed their contracts with him, and he started doubling return claims.

But soon, money became tight, and Willhoit was using money from new clients to pay off older clients.

"Slowly but surely it got over my head," he said.

After being charged with 12 total counts related to fraud and theft by deception, the court froze his accounts and paid off his oldest clients first, leaving four people in the negative.

He was sentenced to serve ten years in prison.

He spent seven weeks in "jail jail," and then was transferred to Paducah Community Service Center, a low-security facility.

Janssen and Sarah Willhoit became husband and wife there, on June 26, 2006, but about two weeks later, two guards sexually assaulted him.

Afterward, life became more like hell, Willhoit said, with other inmates abusing him. He told his caseworker he was not safe, but the man said the only way to leave was to get written up and sent to prison.

In late Feb. 2007, someone snuck in alcohol, resulting in everyone on two floors being tested for consumption. Even though he had not consumed any alcohol, Willhoit's name was one of the seven called for an infraction.

He was brought to Green River Correctional Complex, where he was eventually cleared of any wrong-doing and where he declined to press charges for the rape, knowing it would only result in a misdemeanor offense, "because you don't have any civil rights as an inmate."

Willhoit was moved to Bell County Forestry Camp, "in the heart of Appalachia," where the majority of inmates were illiterate. At that time, inmates were not eligible for parole until they had a GED.

While he tried to help inmates obtain that, most couldn't get past the first question, because they couldn't read it.

With help from his father-in-law, James Norton, Willhoit was transferred to the place where he'd serve out the remainder of his sentence, Blackburn Correctional Complex in Lexington, his hometown.

The prison chaplain allowed Willhoit to use the chapel to meet with inmates and work on their literacy skills. "One day, I just got put in the hole," Willhoit said.

After two weeks in solitary, Willhoit found out that he'd been charged with starting a gang. Fortunately, the press caught wind of this, and the governor at the time demanded that all correctional facilities provide adult education.

"I made a commitment then to try to help inmates in any way I possibly could," Willhoit said.

A couple months later, after ruffling more feathers, guards ambushed him, handcuffed him, put him in the hole, and brought in a psychiatrist named Billie Stockton.

Stockton was pressured to say Willhoit was unstable and suicidal, but refused. She told Willhoit, "You're not safe here. These people are trying to find a way to lock you up indefinitely."

"A lot of bad stuff was going to happen to me," Willhoit said, tears brimming in his eyes. "She saved my life."

Inmates would file false reports to get Willhoit in trouble, Stockton said, and "employees didn't like him because he was smarter than they were."

"I think they also felt threatened by him because he was smart enough to see through their games," Stockton, who has since retired, said Wednesday.

"He managed to rise above all of that," she said.

The Kentucky Legislature decided that inmates could earn 90 days credit for every degree earned, and Willhoit said he "went crazy, earning every degree known to mankind."

With his credit for work time and for seven degrees, Willhoit was going to be out in five years.

Willhoit found a job with the Lexington Rescue Mission overseeing programs to help inmates re-enter the community. From there he began working with the Bluegrass Re-entry Counsel, and eventually, he and his father-in-law started Bluegrass Families of the Incarcerated.

It was while working in prison ministry in Beattyville, Kentucky, that Vermont entered his radar. Vermont was sending prisoners to that facility, and Willhoit kept hearing Kentucky prisoners saying, "Why don't we have all these rights that the Vermonters do?"

The governor asked Willhoit to serve on a prison reform task force. He began testifying to the Kentucky Legislature about prisoners rights. And then came Gov. Beshear's pardon, which restored his civil rights.

There was more bad news -- funding for the re-entry program had dried up.

But then Willhoit got a letter from a double-lifer who had assaulted him in prison. The man apologized, and begged Willhoit not to give up. He said Willhoit was the only one out there who knew what it was like inside.

He and Sarah took a trip to Vermont Law School. Willhoit included his whole past in his essay, and the woman said he was exactly what the school was looking for. But he had to get a better score on his LSAT.

Willhoit took the test again in January. "Only by the grace of God, I did awesome," he said.

"We got a letter from Vermont Law School, and they're going to give me the second largest scholarship they offer," Willhoit said. "I said to Sarah, 'I guess we're going to Vermont!'"

Justice Denise Johnson spoke at his orientation. Willhoit spoke with her afterward, and she said he needed to meet Anna Saxton.

During a law school session at the State House, Willhoit met a lawyer with the Prisoners' Rights Office, who told him that Saxton said if he wanted a job, he had one.

During a defense bar training, Willhoit met Jill Jourdan. A year later, Willhoit was working with Defender General Matt Valerio on legislative issues, when Jourdan called and asked him to investigate for her office.

He now represents clients in criminal court in Essex, Caledonia and Orleans counties.

While he loves his work, Willhoit wants to take Vermont's model of prisoners rights back to Kentucky, where reform is badly needed.

Vermont is the only state in the union to fund a Defender General's office as well as a Prisoners' Rights Office. "In Vermont, stuff cannot be hid under the rug," he said.

"We have to give Janssen a lot of credit," Stockton said. "He was one of the most motivated people I worked with."

"I have a lot of respect for him," Stockton said.

Seth Lipschutz of the Prisoners' Rights Office said he offered Willhoit his first legal job in Vermont, and "I didn't feel like I was taking a chance on him."

Willhoit made a mistake, but didn't set out to rip people off, Lipschutz said. "He tried to dig himself out of it, but it didn't work."

Because of his past, Willhoit is uniquely suited for his position and he has helped a lot of people in the process, he said.

"He is the most upright and honest and ethical and moral, righteous, sincere, earnest person I know," Lipschutz said.

Lipschutz said, "He needed a second chance. I'm really glad I gave him that."

"A lot of people wouldn't have had the courage to do what's he done," said Willhoit's employer Doug Willey.

"He's been transparent throughout," Willey added. "The guy made a mistake, and he paid for the mistake."