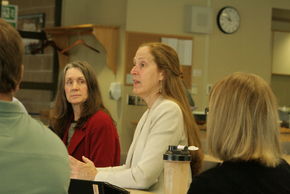 North Country Career Center Director Eileen Illuzzi speaks about programs at the facility while guidance coordinator Gillian Staniforth looks on during a meeting with an economic development committee Wednesday. 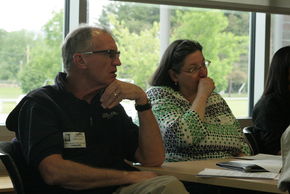 Jim Campbell of the Newport Economic Development Steering Committee asks about gauging education to fit with work opportunities in the area - or planned for the area - during a meeting with the North Country Career Center Regional Advisory Board Wednesday. With him is Karen Geraghty, a member of the committee.

North Country Career Center Director Eileen Illuzzi speaks about programs at the facility while guidance coordinator Gillian Staniforth looks on during a meeting with an economic development committee Wednesday.

Jim Campbell of the Newport Economic Development Steering Committee asks about gauging education to fit with work opportunities in the area - or planned for the area - during a meeting with the North Country Career Center Regional Advisory Board Wednesday. With him is Karen Geraghty, a member of the committee.

NEWPORT CITY -- The North Country Career Center Regional Advisory Board welcomed members of the Newport Economic Development Steering Committee to its Wednesday meeting to hear what the center can be doing better to prepare students for the local workforce.

The programs need to focus on the development and jobs that are already here in the Northeast Kingdom, said Jim Campbell, a real estate agent and member of the committee.

"The biggest complaint we hear here is we export all our students," Campbell said.

The ability to adapt may just be the most critical skill to bring to 21st century careers, said committee member Karen Geraghty of UVM Extension.

Geraghty said she recently had a conversation with a 10-year-old about what he wanted to do when he was grown up. "What I'm going to be doing doesn't exist yet," the child said.

"Wow, he knows that already," said board chair Grant Spates.

NCCC Director Eileen Illuzzi said the center tries to combine academic rigor with excellence in trade skills, while trying to impart skills that will be useful in local industries.

Many programs offer college credits through the dual enrollment program with Vermont State Colleges, and many offer industry-recognized certifications so that kids can start work before they even leave high school, Illuzzi said.

The mechatronics program, which will merge with the computer-aided design program next year, is offering skills that will be needed to diagnose and fix problems with automated machines at AnC Bio, which is expected to be built by late fall 2016.

Airport operator Dan Gauvin is on that program's advisory board, and someone in the community is interested in offering the center a jet engine on which students can learn, Illuzzi said.

Plus, she said, the new instructor has a background in helicopter repair.

Sometimes, the value of that experience is in finding out what they don't want to do for a living.

The internships in kindergarten classrooms have a particularly high rate of changed minds after an hour with "12 small, very needy beings at them," Staniforth said.

Through a federal grant, the center plans to hire a math teacher to integrate math into career center programs to bring up math scores, Illuzzi said.

Illuzzi went through a rundown of all 17 programs, highlighting the forestry, agriculture and natural resources program for becoming the number one forestry program in the entire state.

That program's instructor, Sam Nijensohn, who came to NCCC from St. Johnsbury Academy, said his students came in third statewide in a competition just three weeks after he started the job. "They were not content with third," Nijensohn said.

By the spring, and following an exemplary show of dedication and teamwork, his kids "cleaned house" at Shelburne Farms.

Not only did the team take first place, but NCCC took first through fourth places in individual scores.

Nijensohn spoke about the students' work from raw forest product to finished product during the preparation and construction of the replica of Henry David Thoreau's cabin at Prouty Beach, saying that they not only learned hard skills like measuring a section of forest but also soft skills like working together as a team, the value of land and resource stewardship, and effective communication.

Four students - Jed Wheeler, Henry Delabruere, Jake Swanson and Isaiah Carbonneau - will travel to Kentucky for a national competition in October. Of the 10 students who presented information to the board, nine plan to embark in careers related to their NCCC program.

Illuzzi said that when she interviewed Nijensohn, he said he wanted to make this program the best in the state.

"I didn't know he was going to do it that quickly," North Country Supervisory Union Superintendent John Castle told her.

"This is impressive," Campbell said.

Committee member Ross MacCormack, who represents the Newport City Renaissance Corporation, said he thinks more people should be aware of what the NCCC is doing.

Maybe that's where the center is lacking, Illuzzi said - telling everyone "how awesome we are."

Joe Kasprzak of Northeastern Vermont Development Association said it has been challenging to get businesses more involved in education as well, but he said that may change when they have a greater need for employees in a more competitive marketplace.

There are also opportunities for adults to get skills in some fields, and businesses are welcome to attend the annual career fair, Spates said. Plus, if businesses need employees trained in a specific field, there is money available to custom design programs, he said.