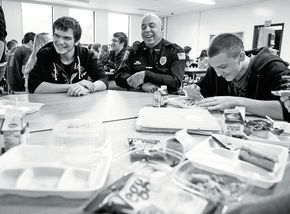 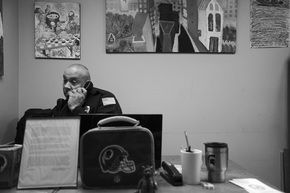 When students walk into White Mountains Regional High School, one of the first people they see is Whitefield Police Officer Mike Bouton.

A broad-shouldered former boxer, bouncer and soldier, Bouton, 56, has served nine years as school resource officer (SRO), a position that combines the duties of educator, counselor and law enforcement official.

He carries a firearm -- something that is mandatory for an officer and necessary in the post-Columbine, post-Newtown era -- but considers it his least useful tool for combating school violence.

"A lot of people think that it's just having a gun in the school and all that. And that's not what it's about. It's about understanding people, watching people, giving them somebody to talk to," said Bouton.

Bouton crosses paths with most of the school's nearly 400 students during his daily rounds. He greets them with a fist bump or a joke, checks on their health and welfare, and monitors them for changes in behaviour or mood that can signal deeper problems.

When students run into problems -- anxiety, depression, bullying, fighting, or other 'at-risk' behaviors -- Bouton will often pull them aside for a private conversation. Like most school resource officers he uses arrest exclusively as a solution of last resort.

And even then, when a student makes a mistake that results in disciplinary action or an arrest, Bouton said he helps them recover.

"Even though they mess up it's not the end of the world," said Bouton. "I tell them 'You got off track, let's get you back on track'."

The SRO concept was conceived in Flint, Mich., in 1953, and has gained widespread acceptance. Today there are approximately 10,000 school resource officers nationwide including more than 450 in New England, and those numbers continue to rise, according to the National Association of School Resource Officers.

For most the job stretches beyond the traditional school day.

"An officer that walks in here and thinks it's going to be an eight hour job and really doesn't care about young kids or high school kids, then you've got the wrong person," said Bouton. "You have to have somebody that wants to work with them."

Bouton frst developed the qualities that make him an effective SRO -- patience, humor, toughness, and compassion -- during his childhood in Washington, D.C.

The son of a black father and a white mother, he endured racism from both the black and white communities, at a time when inter-racial marriage was still banned in some states.

"Growing up in D.C. and being from a bi-racial family we had to fight a lot," said Bouton.

On top of that, Bouton was raised in "one of the worst housing projects in D.C.," where his five siblings (four brothers, one sister) fell victim to pervasive drug and gang activity.

But he managed to steer clear of trouble with the help of two police offiers -- a husband and wife team that patrolled his neighborhood -- whom he grew to admire. They looked out for him and fostered his growing interest in art.

"I grew up in an area that hated cops. My family hated cops, I wasn't too wild about them back then but I had respect for then," Bouton said. "I knew that was kind of what I wanted to do but I couldn't let my brothers and sister know that."

"When I was going through some really tough times with my family -- because I was the only one in my family other than my mother that wasn't a drug addict -- they were always there for me and they always kept me taking one step forward instead of a step backwards."

"[T]his husband and wife team that walked the beat kept after me. They kept on me about my artwork. Those two, my artwork and the military got me to see things in a lot of different ways."

That began Bouton's journey from Washington, D.C., to Whitefield.

After high school he enlisted in the U.S. Army, where he served in the military police corps in Germany and then as a drill sergeant at Fort Benning.

While he was in the service he did a lot of boxing. When he got out he began bouncing at bars and nightclubs.

During a chance trip to the Fryeburg Fair he fell in love with northern New England and resettled in the Conway area. He bounced for local bars at night and worked a variety of day jobs, including cooking for local restaurants (his father was a chef in Chicago) and running his own diner.

He was working at a machine shop and teaching boxing at the Conway Athletic Club when he met his wife, Tenley. She was the shop's vice president and also took some boxing lessons at his gym. They eventually moved back to her hometown of Whitefield.

During this time he and Tenley were visiting a mall in Conway when he spied a young man wearing a blue bandana.

"I asked him what's up with that blue rag on your head. He was like "These my colors homes." I said "Your colors? Where are you from?" He said "I'm from here." I told him "You know what, you need to take that off. I said it's not a game. To a lot of people that's a way of life, those colors are going to get you killed." Then I saw him a week later and he'd taken them off," said Bouton.

That incident sparked a discussion with his wife, who suggested he apply to become a school resource officer at White Mountains Regional High School in Whitefield.

The idea appealed to him and, at age 49, he enrolled in the police academy.

Bouton has become a valued member of the White Mountains Regional High School staff. Co-workers and students alike speak highly of him.

His importance was underscored a couple of years ago, when he was out several weeks due to a medical issue. During that time student behavior problems cropped up, some of which required police intervention.

"The value is the presence alone," said White Mountains Regional Principal Mike Berry. "He was out an extended period of time [while undergoing cancer treatment] back in 2010 and you could just feel the vibe of the building was different. Some kids were a little more bold, a little more outspoken."

The day Bouton returned, a simmering problem boiled over, and a student got into a physical altercation with Bouton.

"I ended up getting in a tussle with a kid that very same day, and I ended up busting my stitches," said Bouton, adding that there were no hard feelings between him and the student, who has since graduated. "That kid still asks about me and I ask about him."

Schools across the North Country continue to upgrade their safety and security systems and procedures, particularly in the wake of incidents like last year's massacre at Sandy Hook Elementary School in Newtown, Conn., where a single shooter killed 20 children and 6 adults.

Over the past year in Littleton, school entrances were fitted with swipe card systems, blue lights were installed outside the middle and high school buildings to warn anyone arriving of a lockdown situation, the high school receptionist area has been fitted with bullet proof glass and the elementary shool phone system was upgraded to allow for better emergency response. Other local school districts have taken similar measures.

However few area school districts have SROs. Lin-Wood Regional in Lincoln and Kennetty Middle and Senior High in Conway are the only other North Country schools with resource officers. Littleton cut theirs several years ago but have retained a school safety offier, retired Police Chief Lou Babin, who is neither armed nor an active police officer but performs some SRO tasks.

While there are many approaches to school safety, school resource officers are uniquely positioned to help those most at risk.

Bouton also acts as a patrol officer for the Whitefield Police, which provides him with a broader understanding of student behavior, and how incidents at home or in the community might impact their behavior in school.

"You have to pay attention to the signs. Inside school, outside school, what's going on. That's where being a patrol officer also helps out," said Bouton. "I know when an individual has had a rough night, because of things going on in the household. I can give the teachers a heads up."

Bouton makes it a point to seek out those who are in the greatest need.

Last year, when Andrew Owen arrived at White Mountains Regional, he struggled to fit in after years spent in very small, alternative schools. He was also stressed out because of problems at home. He needed a helping hand. That's when Officer Mike stepped in.

"When I got here during the middle of last year, I was going through a bunch of hard stuff, and Officer Mike usually came through to help -- or pointed me to someone who could," said Owen, 19. "He pretty much goes out of his way to help."

In the same way police officers once helped him, Bouton has offered guidance to Owen, helping him to stay calm and collected, and encouraging his interest in pursuing a career in social work.

"A lot of kids see cops as people that are looking to get you in trouble or nab you for something you did, but Officer Mike, he throws that right out the window," said Owen. "If I'm having a bad day, I walk up to his office, and usually within the first 5 minutes I'm laughing and the day's fixed."