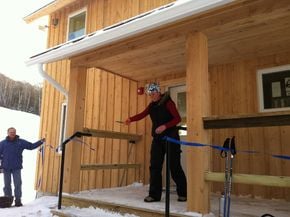 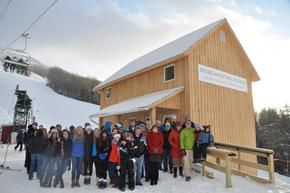 The new Burke Mountain Academy Warming Building was recently constructed at Burke Mountain, replacing the old warming hut at the base of Warren's Way (BMA's Training Hill). Replacement of the existing warming hut has increased the capacity, allows for better utilization of video during training, and has created more space for timing, equipment storage, video review, as well as a better area for the athletes to take breaks during training.

Burke Mountain Academy was founded in 1970 and has an unparalleled record of success in producing National Team and top performing college ski racers. Since its inception more than 100 Burkies have gone on to qualify for national teams and more than 50 have competed in the Olympics, far more than any other program in North America. These statistics are particularly remarkable considering BMA is the smallest of the major academies and ski programs in the US, with only 839 total alumni. The Academy chooses to remain small and highly selective so as to perpetuate the rich BMA tradition of athletic excellence.

Inside a KKK murder plot: 'Do you want him six feet under?'

Inside a KKK murder plot: Grab him up, take him to the river

Study: Only half of American households donate to charity

'This is how I'm going to die': Officers tell Jan. 6 stories

Biles withdraws from gymnastics final to protect team, self

With virus surge, US to keep travel restrictions for now

Tulsa massacre remains to be reinterred in private ceremony

“I don’t trust any of them. It doesn’t mean I won’t hear them out. But they lied too much already.”

“He’s trying to put together staff and cost, but we’ve said that cost will not be an issue here.”

“It seems critical to me that we maintain the rink. At the end of the day, this is a town facility owned by the town and we have a duty to maintain our town buildings."

“It’s our duty and responsibility to care for those patients and sometimes they can be dangerous."