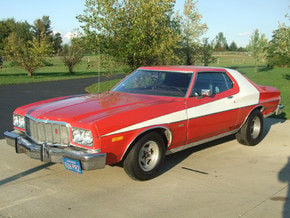 The first time this car really caught my attention was in Driver: San Francisco on my Xbox 360. It was a Red 1974 Ford Gran Torino and I used it to complete what is called a "Movie Mission." Since then, I have rediscovered this car on the old TV series, Starsky and Hutch (and yes, we watch old TV shows using Netflix). I realized that this car has a lot to offer and thought I'd do a story on it.

So, what is a Gran Torino? The Ford Torino is an intermediate-sized automobile produced by the Ford Motor Company for the North American market between 1968 and 1976. The car was named after the city of Turin, which was considered the primary auto production city of Italy. The Torino was to begin with, an upscale version of the intermediate-sized Ford Fairlane, which Ford produced from 1962 to 1970 and the Torino was considered a subseries of the Fairlane. By 1970 the Torino had become the primary name for Ford's intermediate car and the Fairlane was now the subseries and by 1971 the Fairlane name was dropped altogether and all Ford intermediate cars were called Torino.

Torino's were conventional cars and generally the most popular models were 4-door sedans and 4-door hardtops.

As you may have guessed it by now, it is time once again to do a movie car, or in this case, cars, the Ford Gran Torino and I'd like to feature: the 1974-76 Starsky and Hutch version and the 1972 Gran Torino from the Clint Eastwood movie, Gran Torino.

For those of you who don't remember, Starsky and Hutch was a television cop show that ran between 1975 and 1979 on ABC. The show featured two California policemen, the dark-haired David Starsky (Paul Michael Glaser) playing the driver and the blond Ken "Hutch" Hutchinson (David Soul). Their radio handle was "ZEBRA-3" and their street car was an eye catching tomato red, 1974-76 Ford Gran Torino automobile with a wide white stripe. It had a 351 cu. in. Cleveland V-8 rated at 250 hp with a four barrel carb, a XPL type C-6 auto transmission, a black vinyl interior with white trim and get this, it had an AM-FM radio with ... 8-track tape player! The show started by using a 1974 Gran Torino and updated to the 1975-76 models for its second, third and fourth seasons. These cars were built at a time in history when horsepower was being replaced by fuel economy and environmental standards. The 4400-pound Ford was not the quickest off the block with the base 351 c.i. engine -- it really wasn't a muscle car but it just looked good. In 1976 Ford introduced a very limited edition (1,002) Starsky and Hutch replicas of the Gran Torino. It was the same car that was used in the show and could run up to over $7,000 with all the options. The 1976 Torino was the last and final Gran Torino before Ford replaced it with the LTD name and product line.

Now how many movies do you know that the title of the film is the same as the feature car? Unless the film title is completely about the car, it's pretty rare. But the movie Gran Torino is named well because, to main character Walt Kowalski, played by Clint Eastwood, this 1972 Gran Torino Sport is his most prized possession. There were 496,645 Torinos produced by Ford in 1972, however only 92,033 were Gran Torino Sport models, like the one featured in the movie. What makes the Gran Torino Sport special? All of the Sport models had a scoop; however they're only functional with the rare Ram Air Induction package. Some of the Sport models also had the "Magnum 500â?³ wheels as this one does. The laser stripe on the side is an optional piece for the Sport models, and '72 was the first year the stripe ran down the full length of the car. The base power plant for the Grand Torino Sport is the 302 C.U. Windsor V8 2 barrel. However 351W, 351 Cleveland, 400 and 429 were all available as well. These motors will built for low compression (8.5:1) for better fuel economy, thus reducing horsepower as well. You see, 1972 was the beginning of the end of the muscle car era. That's part of what makes it a perfect fit for the movie. Both the car and the main character were part of a time that was challenging and difficult for some people to accept.

The Ford Gran Torino ... a classic intermediate muscle car with movie roots that run deep, yet for the most part frozen in time and somewhat overlooked in a new and changing world.

Cody Facteau is a 16-year old homeschooler from East Burke. He enjoys anything to do with cars, particularly the Classics. He loves Le Mans racing, his favorite TV shows are Gearz with Stacey David & Top Gear (BBC), and hobbies are PlayStation and Xbox 360. He's also a cadet with Civil Air Patrol, the Air Force Auxiliary. Career goals? What else, cars!