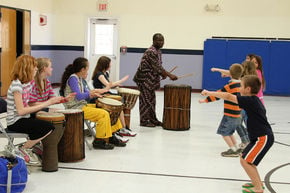 Coventry Village School first- and second-grade students learn traditional African dances thanks to the percussion that was provided by the older students and instructor Jordan Mensah. 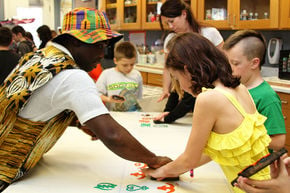 Coventry Village School first- and second-grade students learn traditional African dances thanks to the percussion that was provided by the older students and instructor Jordan Mensah.

It's a simple truth that while it's easy to teach children about local culture in the Northeast Kingdom, learning about other cultures can be a bit tricky. Students at Coventry Village School didn't just learn about the African culture recently, however, they experienced it, and it was all thanks to one of their peers.

Sixth-grade student Manisha Gratton was studying about Africa with the school's enrichment coordinator, Irene Dagesse, when the two realized that learning about the culture was something that the whole school could benefit from. Gratton, with help from Dagesse, wrote a grant which allowed Jordan Mensah, a member of the Shidaa African Culture Project, to travel to Coventry School and to immerse the children in the West African culture for two days.

Mensah grew up in a small tribal locality called Bukom, which is a suburb of Ghana's capital city, Accra. The city of Bukom is known for being the home of a large number of successful boxers, but it is also an area that is rich in history and culture, including dance. Coventry students were able to learn a few different types of traditional West African dances, learning the meaning of the dances while they were learning the steps. Students who were studying percussion were able to help Mensah by providing the beat on the traditional African drums he brought with him. Students seemed to truly be interested in the experience, and many of the teachers were very surprised that even the older students got up and danced with no complaints.

"One of the students came to me and told me that now that he had learned the hunting dance it meant he was old enough to go out and go hunting," Mensah reported, laughing.

In many schools students will only get a glimpse of another culture by watching a performance, but at Coventry the immersion continued with three different activities: cooking, fabric painting and storytelling.

Older students were ushered into the small kitchen in the staff's lounge where they cooked up two unique, and delicious traditional African dishes -- boiled plantains and spinach stew. Surprisingly most of the children not only tried the dishes, but enjoyed them so much that there was nothing left for the younger students to try!

All of the students were also able to enjoy fabric painting. Mensah took over the school's art room and taught students about many of the traditional symbols that are found on South African clothing and art and what they stood for. The students were then able to do a bit of block printing on large pieces of fabric, which will be sewn together and transformed into a large piece of decorative artwork that will be showcased at the school.

Once cooking and fabric printing were completed, Mensah told traditional African stories to the younger children, engrossing them into the stories using drums and props. Students were even able to try on a traditional tribal mask. All of the students then gathered together for a large assembly to show off their newly acquired dancing skills.

The South African immersion experience was made possible thanks to donations from the Coventry Town Foundation and local contributors. The most surprising part of the whole experience, for this reporter, was the simple fact that the entire experience happened because of the ingenuity and perseverance of one young sixth-grade student.