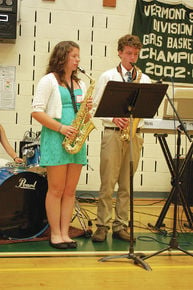 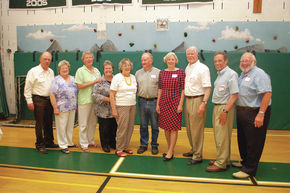 DHS HOLDS 97th ALUMNI BANQUET -- The Danville High School Alumni Association celebrated its 97th annual banquet June 1 in the school's gymnasium. The 2013 banquet was one of the largest events in years with good support from the class of 1963. Social hour began at 4:30 allowing everyone a chance to mingle, stroll down Memory Lane, and bid at the silent auction. Entertainment was provided by the Danville High School Jazz Group showcasing Danville seniors Jenny Moore and Ryan Clancy (at right). This year the association presented four scholarships to Danville seniors. The recipients included AJ Friend, Kaylynn Zangla, Jenny Moore and Brady Rainville. The date for the 98th DHS Alumni Banquet is scheduled for May 31, 2014. Above are members of the Class of 1963, from left, Francis Clifford, Dianne Brown Gadapee, Betty Greaves Larrabee, Judy Kennedy, Nancy Peck Jones, Jim Hastings, Jane Beattie Kitchell, Mark Curtis, Robert Balivet and Harry Swett.