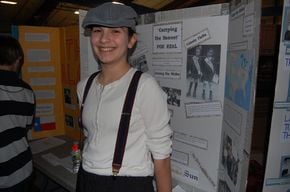 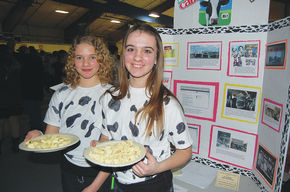 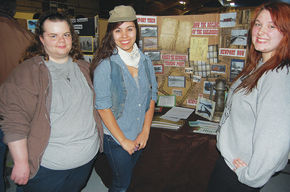 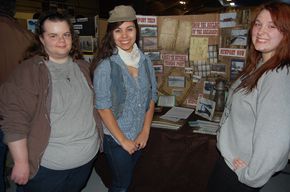 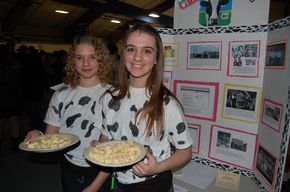 North Country Union High School students Cara Conroy of Holland, Johna Saltsman of Derby and Jade Cota of Montgomery are fans of local history. They presented the history of the decline of the railroad and how it affected Newport City at the NEK History Fair in Derby Wednesday. 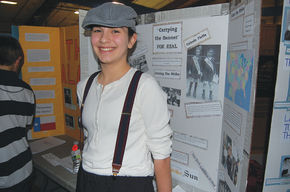 North Country Union High School students Cara Conroy of Holland, Johna Saltsman of Derby and Jade Cota of Montgomery are fans of local history. They presented the history of the decline of the railroad and how it affected Newport City at the NEK History Fair in Derby Wednesday.

DERBY - "It's cool to know that where I live had so much history."

Johna Saltsman of Derby and two classmates at North Country Union High School discovered how the decline of the railroad industry affected Newport City as part of their project for the Northeast Kingdom History Fair Wednesday in Derby.

In the process, Saltsman, Cara Conroy of Holland and Jade Cota of Montgomery learned that Newport City was a mecca for big-time jazz musicians like Ella Fitzgerald and Louis Armstrong, who rode the railroad to play in Newport City.

"I didn't know Newport was ever popular," Conroy said wistfully. "I missed my time, Lord send me back."

"Trains helped to build up Newport," she said.

"A lot of the railroads passed through Newport," Cota said.

Then the flood of 1927 washed the tracks away. "There was so much damage," Saltsman said.

There was a chance for higher speed rail, but that faded, she said. "I thought it was sad that they didn't support it."

Cota and Saltsman confessed a love of local history now. As for Conroy, she never thought much of history but now she enjoys it. Their display was just one of hundreds at the NEK History Fair at Indoor Recreation of Orleans County (IROC).

Students from across the NEK participated, most from Orleans County schools, filling the big gym at IROC with their projects March 27, said organizer Aimee Alexander. Students from grades five through 11 competed in the judged fair which features three categories: exhibits, documentaries, and websites.

Some of the participants expanded their displays to include costumes, like Celeste Piette, a seventh-grade student from St. Paul's School in Barton. She dressed as a "newsie," a news boy who hawked newspapers on the street and participated in a strike in New York City. Piette said her project received a lot of attention because she was decked out in old-fashioned short pants, suspenders and a cap.

Another team used "show and taste" for their project: using plates of cheese along with a display of the history of Cabot Cheese and Ben and Jerry's in Vermont. Jessie Bailey and Apple Hill Barnes, seventh-grade students at Glover Elementary School, said they wanted to do something local.

"Ben and Jerry's didn't used to be everywhere," Barnes said. "They worked their way into the image of Vermont."

Alexander said judges looked for original research and effort in the projects.

Some participants did a fashion show. Others, like a trio of students from Holland Elementary School, did a traditional Abenaki song with drums. The three students, Jade Petelle, Madigan McGregor and Martina Turgeon, are part of the Nulhegan Junior Drummers at the school.

The history fair drew hundreds of people to see the displays and enjoy the performances at IROC.