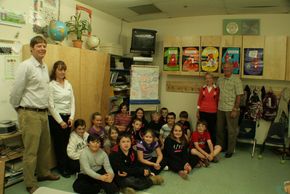 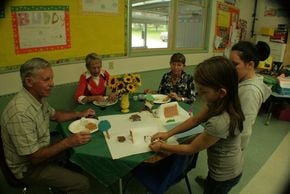 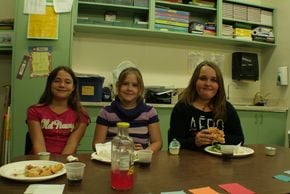 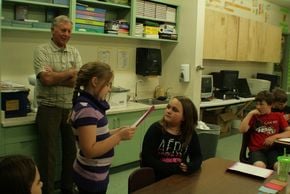 Molly Lepage reads her letter of appreciation for Newspapers in Education while Sen. Robert Starr listens.

Molly Lepage reads her letter of appreciation for Newspapers in Education while Sen. Robert Starr listens.

NORTH TROY -- The fourth-graders in Linda Perry's class at Troy Elementary School were treated to a pizza party, courtesy of The Caledonian-Record and Orleans County Record, on June 6. The class was chosen for the honor because of their efforts to thank Sen. Robert Starr and his wife, Anita Starr, for sponsoring Newspapers in Education for their class.

This the second year in a row that the Troy fourth-graders have been awarded for thanking the Starrs with aplomb.

But before the Hoagie's pizzas were consumed with gusto, some of the students stood to read letters of appreciation to the Starrs.

Tyler Turcotte read a message the class wrote together for the Starrs and the Orleans County Record. "Thank you for making us "Starr" readers this year. We enjoyed reading the "Starr" stories. We truly appreciate your support and "Starr" dedication towards our education. You are "Starr" community members," Turcotte read from a large sign.

Perry told Sen. Starr, who served on the Troy school board for 21 years, that she appreciates the fact that the Newspapers in Education program fits perfectly with the fourth-grade reading curriculum. "It makes my job easier," Perry said. In fact, she said she can pull several lessons from one installment with its vocabulary lists and focus on comprehension.

Students asked a few questions of this reporter, before turning their focus to Sen. Starr. "You can ask me anything but how old I am," the senator laughed.

Starr told students how he helps the state through his work in the Legislature, like deciding which roads to pave and by putting together the state budget. Starr told the students it is very important to read newspapers because it helps them become informed and active members of their communities.

Starr said he's sponsored newspapers in classrooms for many years. "I think it is a great learning experience for you young people," he said.

In handsomely decorated letters, students wrote that they like the crossword and word search puzzles, comics and sports sections, but gave a huge thumbs-up to chapter stories in the Newspapers in Education section. Their favorites were "S.O.R. Losers" and "Magic Elizabeth."

Students said newspapers in their classroom help increase their knowledge of vocabulary and improve their spelling skills.

"I especially liked S.O.R. Losers because every time they played a game they lost, but they remained friends -- more importantly, in real life this made them winners," Jada Prue wrote.

"Thank you for helping me become a star student at Troy School," Derek Medley wrote.

As students grabbed cookies prepared by Mary Lou Bonneau, Molly Lepage exclaimed, "This is the best day ever!"