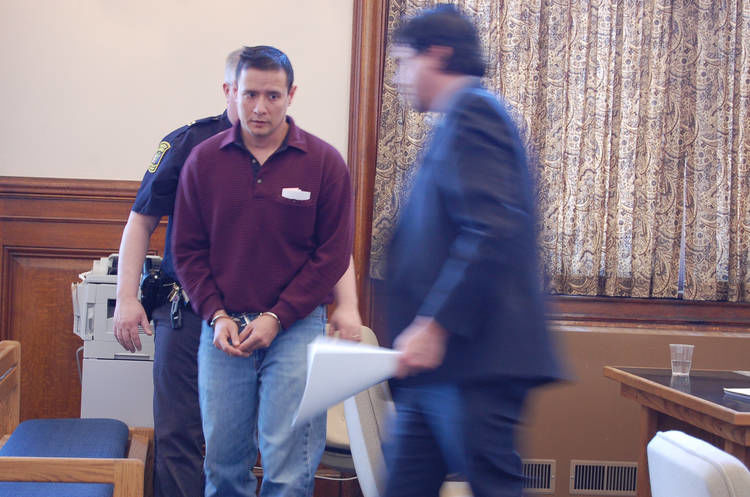 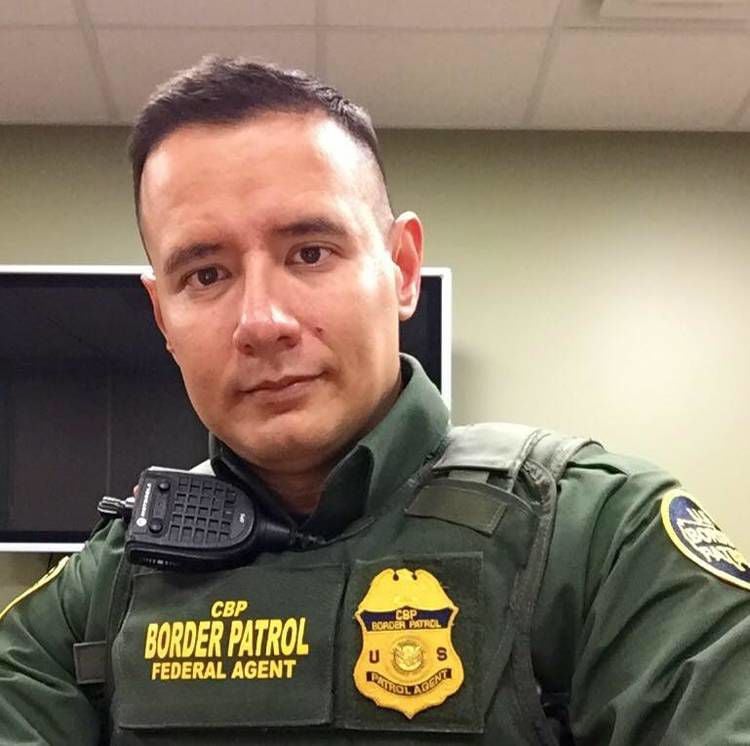 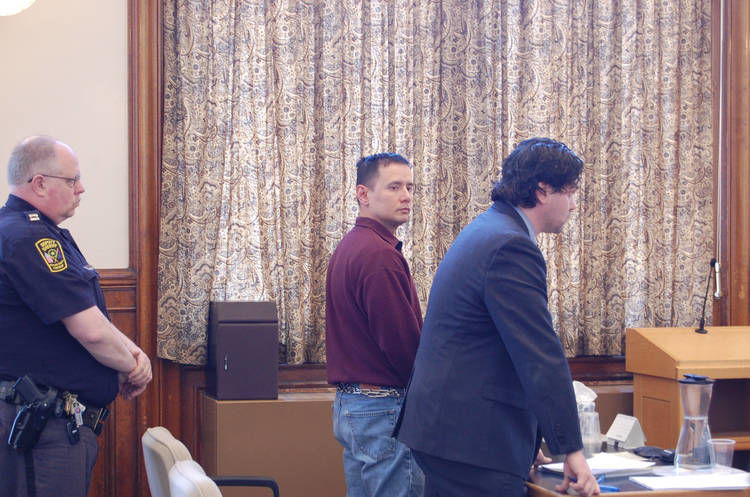 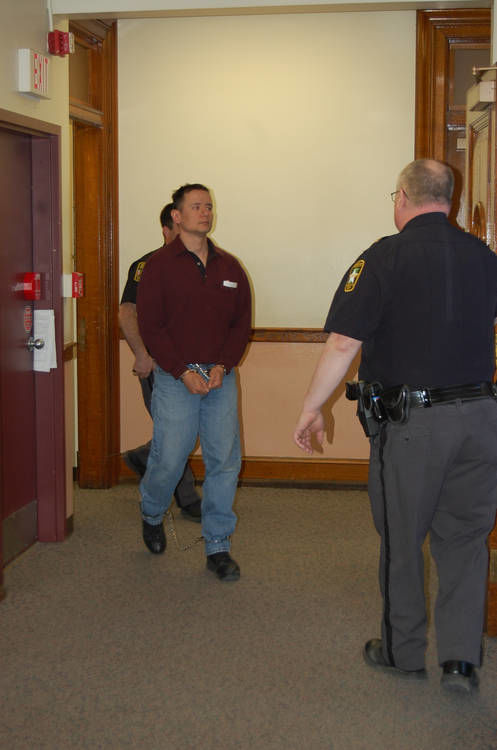 U.S. Border Patrol Agent Joseph Blecha is escorted in shackles into court in Newport City Monday afternoon where he pleaded not guilty to a charge of aggravated domestic assault in the first degree. (Photo by Robin Smith) 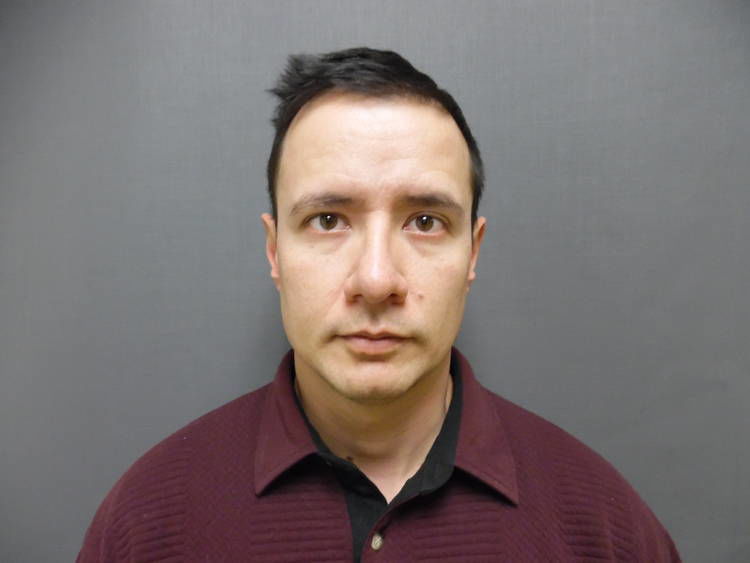 U.S. Border Patrol Agent Joseph Blecha is escorted in shackles into court in Newport City Monday afternoon where he pleaded not guilty to a charge of aggravated domestic assault in the first degree. (Photo by Robin Smith)

NEWPORT CITY — A U.S. Border Patrol agent is being held without bail following accusations of a violent domestic assault on Sunday.

Joseph Blecha, 38, of Derby, appeared in Orleans Superior Court on Monday afternoon in shackles, escorted by sheriff’s deputies, to plead not guilty to one felony count of aggravated domestic assault in the first degree.

Judge Robert Bent ordered Blecha held without bail pending a bail hearing. Bent also ordered Blecha to have no contact with his girlfriend, the alleged victim.

Blecha is accused of striking his girlfriend in the head, nearly knocking her out, according to Vermont State Police affidavits.

Orleans County State’s Attorney Jennifer Barrett asked for Blecha to be held without bail, telling the judge that the alleged victim said that this isn’t the first time Blecha assaulted her. Barrett said Blecha had strangled the woman until she passed out and threatened to use a tazer on her.

Blecha is a 15-year member of the Border Patrol and a veteran of the U.S. Army National Guard, according to public defender Daniel Harnick.

The U.S. Customs and Border Protection agency of the U.S. Department of Homeland Security issued a comment late Monday afternoon about Blecha’s arrest.

“U.S. Customs and Border Protection stresses professionalism, honor and integrity in every aspect of our mission and does not tolerate actions by any employee that would tarnish the reputation of our agency. While we cannot comment on personnel matters, CBP is fully cooperating with the Vermont State Police regarding this investigation,” a Customs and Border Protection spokesman said Monday afternoon.

The CBP spokesman would not comment further when asked if Blecha is on leave pending the resolution of the criminal case.

Blecha has no criminal record in Vermont. If convicted of this charge, he could face a maximum penalty of not more than 15 years and/or a $25,000 fine.

State and Newport police responded to a 911 hang-up call at 9:30 p.m. Sunday, when the dispatcher heard a woman say “I cannot speak anymore,” according to an affidavit by VSP Sgt. Debra Munson.

Another 911 call came at 10:06 p.m. when a friend of the alleged victim called to direct police to Blecha’s home on Lakeview Road in Derby, Munson stated.

Police converged on the home to find Blecha and his girlfriend, police said. She had blood on her shirt, a bruised left eye and a swollen and bruised left cheek bone, police said in affidavits.

Blecha did not comment on what happened, police said.

How to start jump roping in 5 easy steps

Munson said the alleged victim cried and knelt down on the floor when she heard that Blecha had been arrested.

“She said she knew what Blecha had done was bad but she did not mean for him to get arrested,” Munson wrote.

She said she was scared and called 911 because she didn’t know what else to do, Munson wrote.

She said in the past she had hit Blecha and he had hit her and choked her and had said “I crossed the line this time,” Munson wrote.

Blecha was arrested and held without bail Sunday evening by the order of Bent. He had been scheduled for duty that night.

Newport Officer James LeClair said Blecha told him the relationship was “hard” and they were about to separate.

The alleged victim said she was leaving and did not want to hurt Blecha’s job, LeClair said.

In a domestic violence risk assessment filled out by the state’s victim’s advocate, the alleged victim said that Blecha’s service weapons – four hand guns and one shotgun – were accessible during the incident.

She wrote that she had previously loaded a hand gun for her personal protection while Blecha was away on assignment, which Blecha found when he came home. She wrote that Blecha was surprised that it was loaded “and he handed me a gun and told me to shoot myself.”

“One time he took out his Border Patrol Tazer and threatened to taze me,” she wrote.

She wrote that he had hit her with a laundry basket in the past, leaving a scar, and other instances of assault.

In court, Harnick argued that Blecha should have a chance to be released on bail on conditions.

Harnick said Blecha owns his home and as a law enforcement officer is unlikely to flee the area.

But Barrett said that Blecha has only lived here for four years and has family, including two children, in Arizona.