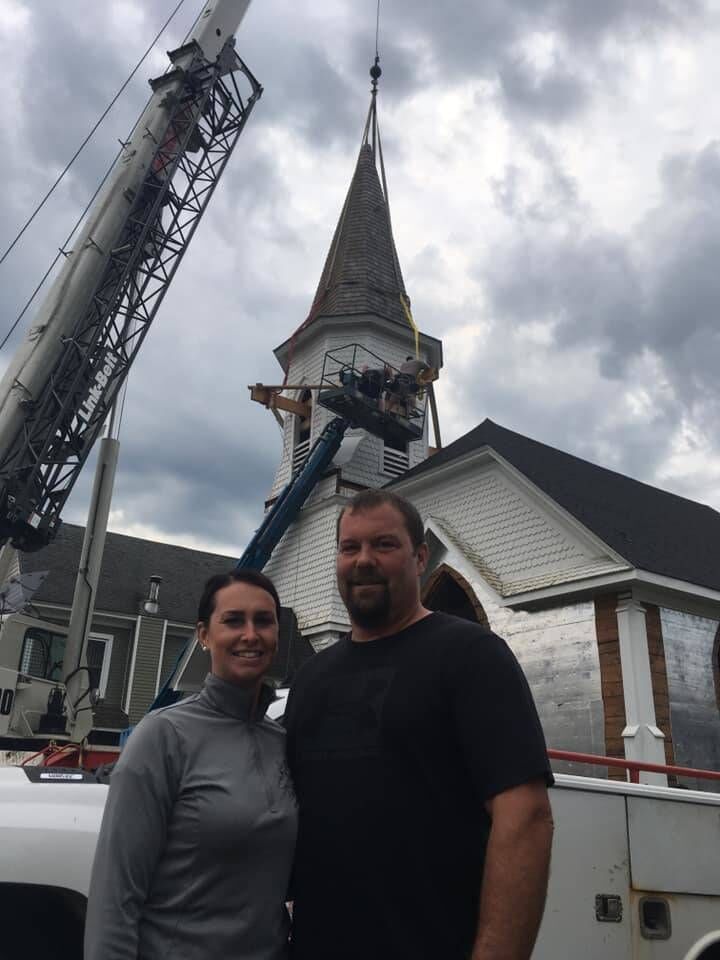 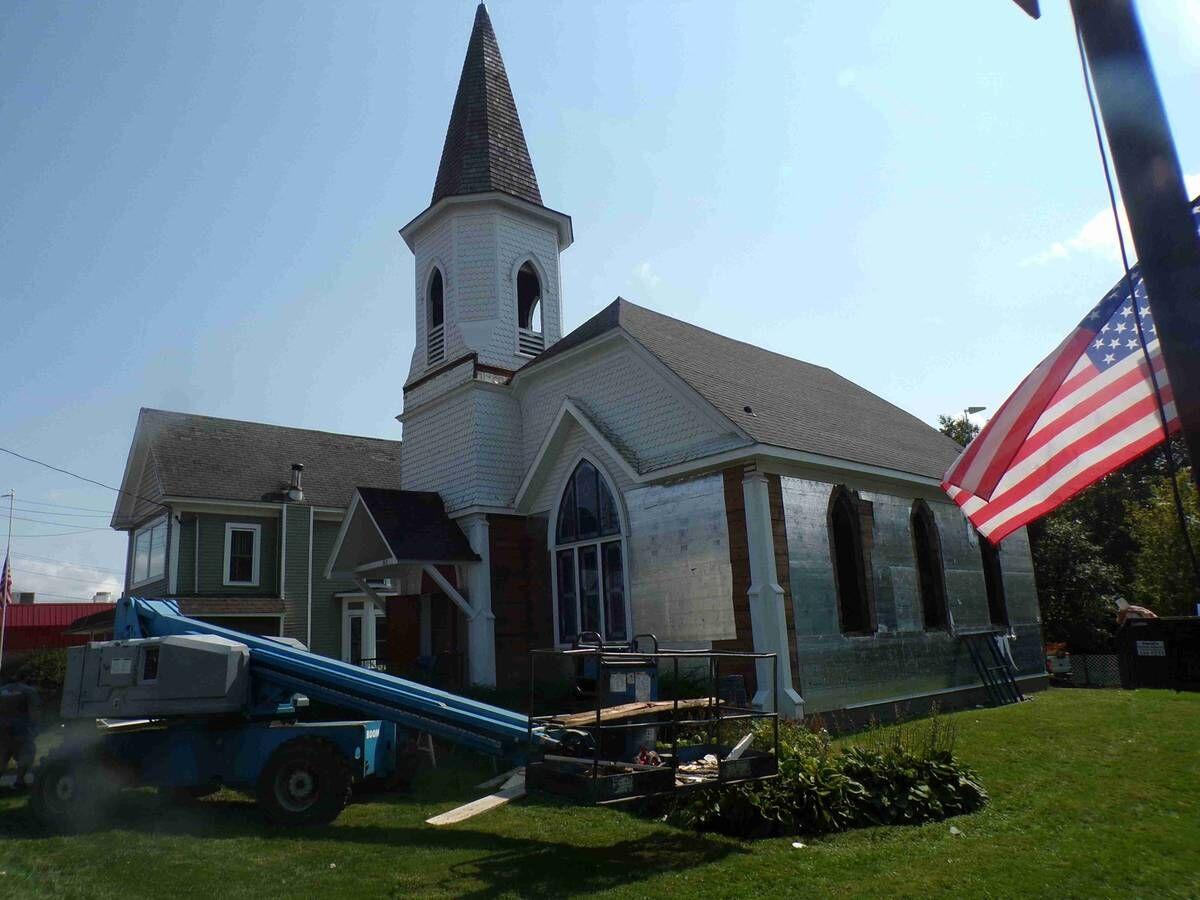 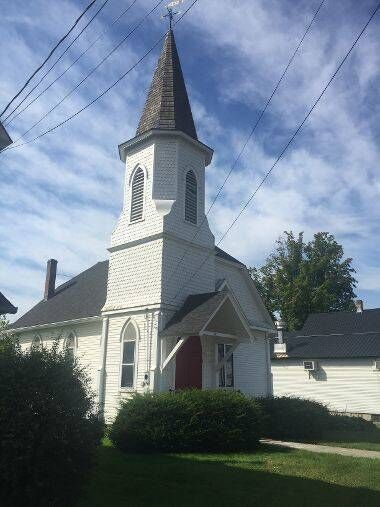 This closed church on East Main Street in Newport City will move Wednesday or Thursday to its new home in Derby. (Photo by Scott Wheeler/Vermont's Northland Journal) 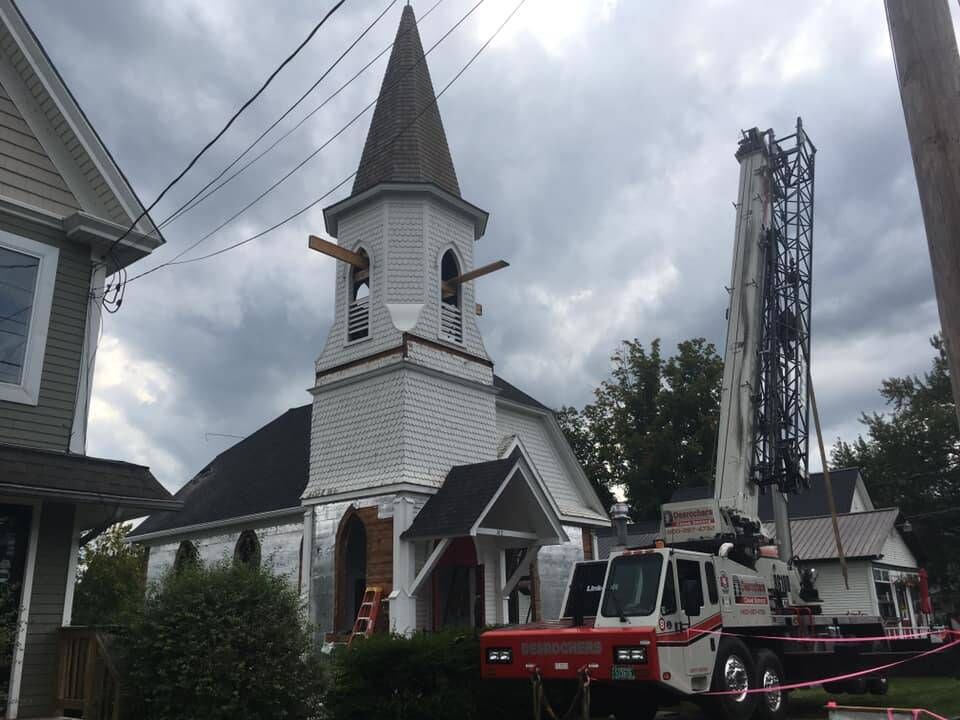 A crane arrives Tuesday afternoon to prepare to take apart a church on East Main Street in Newport City for its move in sections to Derby later this week. (Photo by Scott Wheeler/Vermont's Northland Journal) 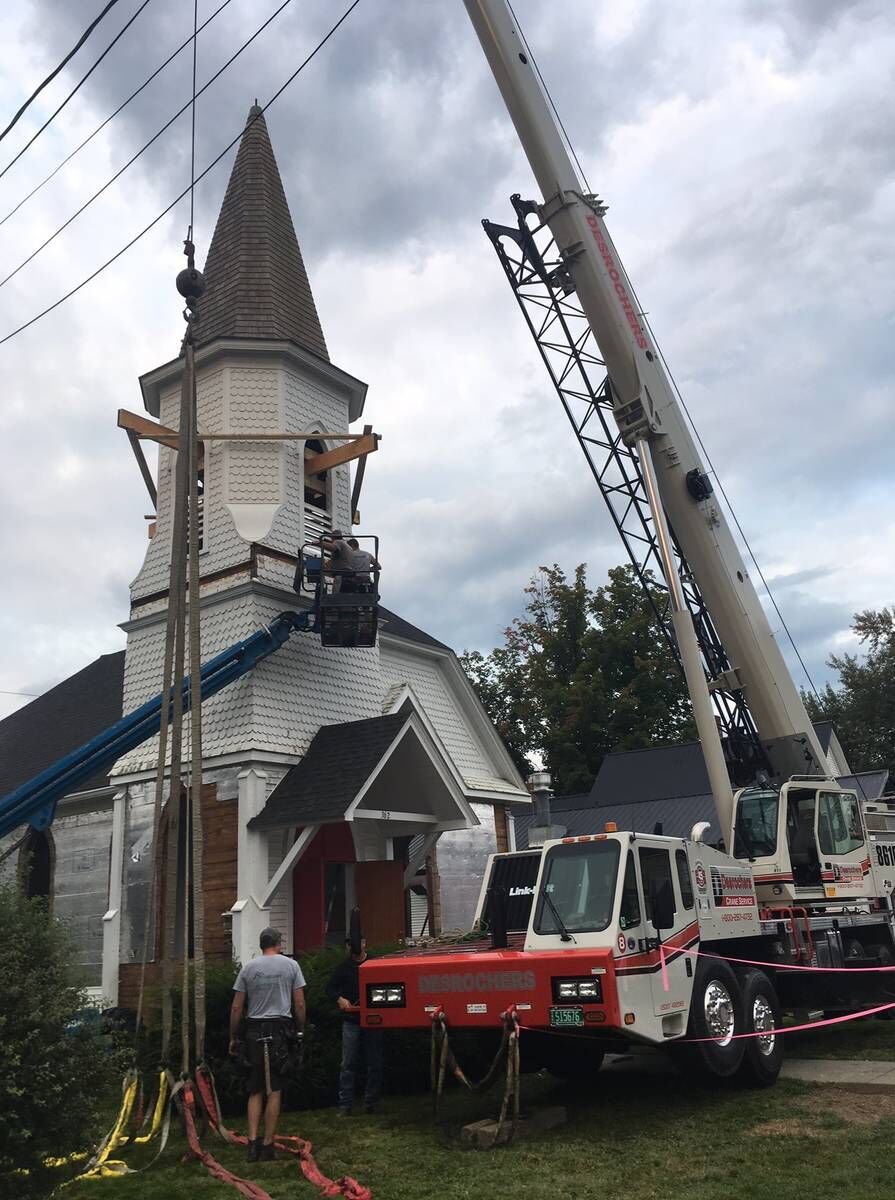 This closed church on East Main Street in Newport City will move Wednesday or Thursday to its new home in Derby. (Photo by Scott Wheeler/Vermont's Northland Journal)

A crane arrives Tuesday afternoon to prepare to take apart a church on East Main Street in Newport City for its move in sections to Derby later this week. (Photo by Scott Wheeler/Vermont's Northland Journal)

NEWPORT CITY — The Barn at the Top of the World in Derby is a scenic site for a wedding — featuring a historic barn and breathtaking views of Lake Memphremagog.

But owners Todd and Hilarie Wright wanted something more.

So they bought the former Christian Science Society church on East Main Street — one of the oldest churches in Newport City — and are moving it this week to their wedding venue property on Quarry Road. Next year, it will be used as a chapel at the wedding site and for church services.

“We wanted to either build one or move one. We are into saving buildings,” Todd Wright said Tuesday.

The barn whet their appetite for old buildings. It was formerly the Macy barn in Coventry, Wright said.

The church has been closed for a while and was down to a few members of the congregation, Wright said.

“We’ve been looking at it for a while, when it came on the market six months ago.”

They paid $70,000 for the building two weeks ago and have hired Desrochers to move it.

The church was being taken apart Tuesday into eight sections in preparation for the move Wednesday and Thursday. Wright said he hopes the church will be reassembled on Friday. Then they will take their time to get it ready to become a chapel.

The move will not require the closing of East Main Street for the work, Wright said. The movers did need a wide load permit.

That means that East Main Street will continue to be open to passersby who were already gathering to watch the move over the next couple of days. Wright said they had not told anyone about what they were doing, but they expected word would spread quickly now.

The lot where the church is located is being sold to the owners of the popular Brown Cow diner next door for a needed parking lot, Wright said.

Members of the church’s congregation, who put it on the real estate market, “were super excited that it stayed a local church,” Wright said.

Noreen Hinton, one of the three remaining members of the church’s congregation, watched as the movers took the church apart for the move Tuesday afternoon, sad but happy it will have a new home.

The handful of congregation members had stopped using the church a long time ago, doing services on Skype instead after a member moved to Alabama.

“We were really sad to sell it and think it was going to be torn down for a parking lot or turned into a daycare,” Hinton said.

They were thrilled when the Wrights came along and wanted to turn it into a wedding chapel.

“In our wildest dreams we never thought that would happen,” she said.

The proposed use prompted the congregation to give the Wrights a good deal on the church with a stipulation that a plaque with the history of the church be hung inside.

The building was built of the 1886 and 1888, according to a history of the church. She said it’s not clear which Christian congregation built the church.

Christian Science Society Newport Vermont bought it in 1924, she said.

They added a bathroom and extra storage inside.

If old municipal boundaries were still in place, the church wouldn’t even be moving from Newport City to Derby but from one part of Derby to another.

That part of East Main Street was once part of West Derby, says historian and publisher Scott Wheeler.

More than a century ago, what is now East Main Street was West Derby’s Main Street.

West Derby was annexed into Newport in 1918, at which time Newport became the Northeast Kingdom’s only official city. Wheeler says.

Anyone with memories of the church is asked to share them with Wheeler at northlandjournal@gmail.com. He will write about the church move in his magazine Vermont’s Northland Journal and his upcoming book “Newport: Voices from an Evolving Community.”

Buckfield farm with 50 Jerseys is Maine dairy farm of year