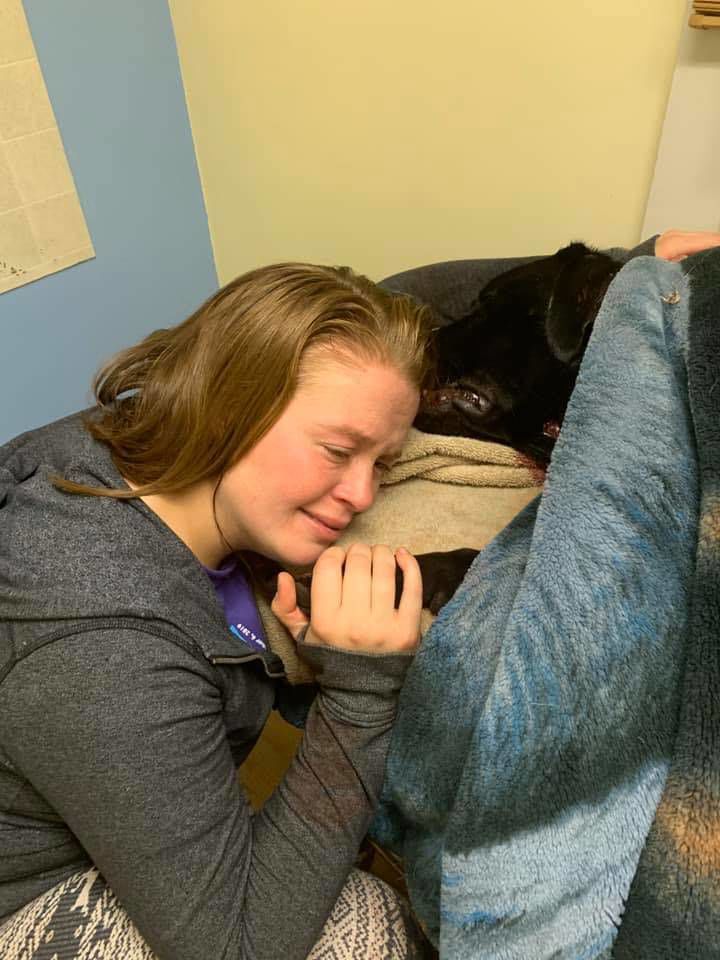 Year-old dog shot in Danville dies; his owner, Jess Buxton is seen with him here after he was found near her home in Danville. (Courtesy Photo) 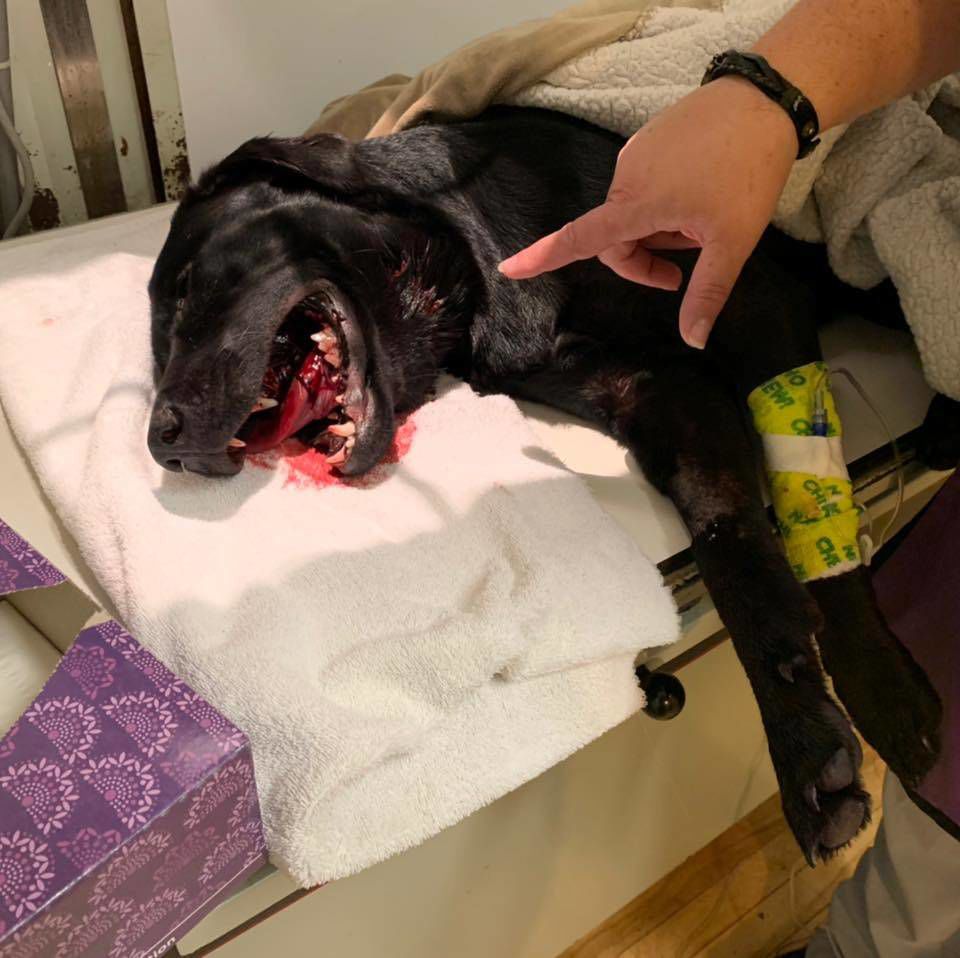 Berkeley, Jess Buxton's dog, at the vet in Littleton before he died after being shot through the jaw. A neighbor of Buxton's, Frederick Keenan, was charged with aggravated animal cruelty on Tuesday afternoon by the Vermont State Police. (Courtesy Photo)

Year-old dog shot in Danville dies; his owner, Jess Buxton is seen with him here after he was found near her home in Danville. (Courtesy Photo)

Berkeley, Jess Buxton's dog, at the vet in Littleton before he died after being shot through the jaw. A neighbor of Buxton's, Frederick Keenan, was charged with aggravated animal cruelty on Tuesday afternoon by the Vermont State Police. (Courtesy Photo)

DANVILLE — A Danville man is accused of shooting a year-old black Labrador owned by his neighbor, Jess Buxton. The dog, named Berkeley, did not survive.

Frederick Keenan, 72, was cited by Vermont State Police on Tuesday with the Sunday shooting. He is charged with aggravated animal cruelty. He will be arraigned in Caledonia Superior Court on Dec. 16.

Buxton, in an interview on Tuesday, tearfully explained how Berkeley had not returned home on Sunday about 1:30 p.m. She said she heard a gun shot about a half hour later.

She said she had suspected it was Keenan who shot her dog and was glad police were able to cite him for the crime.

Buxton said, “The entire community is just as disgusted and angry and wanting justice as I am and it has been amazing and I have been overwhelmed with support. Berkeley deserves it, he was the best dog in the whole world.”

“I’m going to spend the rest of my life making sure this never happens again,” she said.

Buxton recounted the events of Sunday. Berkeley and his litter mate, Wesley, had gone out for a run and only Wesley returned. She rescued the brothers earlier this year and has three other dogs.

Buxton and her dogs live at the end of a long driveway on Hawkins Road with the woods right behind them and she lets them run; they always return after a short time.

After hearing a gun shot, Buxton said she told her mother, Judy Buxton of St. Johnsbury, she was afraid something had happened to Berkeley.

About an hour after Berkeley still had not returned, friends learned of the dog’s absence and arrived to help search, driving along the North Danville Road near where Buxton lives, and searching on foot.

“I felt like something happened,” said Buxton. “I just had a very bad feeling.”

They looked all afternoon, until it was dark. It had started to snow.

About 6:15 p.m., Buxton’s other dogs went out and ran ahead; she followed them and found Berkeley alive but suffering, laying with his head on his paws.

She said she saw blood around his face and neck and thought at first he may have been harmed by an animal.

Buxton and her mother carried Berkley out of the woods and drove him to an emergency veterinary clinic in Littleton.

Soon after they arrived, the vet came out and told her, “Some asshole shot him.” Said Buxton, “Those were the exact words.”

Berkeley was breathing very heavily and strained; a video shows his attempts to breathe are labored.

The vet told Buxton that Berkeley already was showing signs of neurological damage.

They had given him an x-ray that showed pellets from a shotgun shell had shattered his jaw and exited the other side of his head. He was given pain medication and they tried to stabilize him. Buxton was told his best chance was if he was driven to Burlington.

Berkeley was wrapped in warm blankets and the staff was helping Buxton to get him in her car when he stopped breathing and died.

“I sat with him,” she said while sobbing. “I didn’t know how I was going to leave him, except I had my other four dogs at home I had to go to.”

She described him as sweet, gentle, loyal and not aggressive at all; she called him “a big baby.”

“He didn’t have a mean bone in his body,” said Buxton through tears, showing photos of Berkeley and Wesley on her phone. He weighed just 56 pounds.

She said, “He was the sweetest dog I’ve ever had.”

A fundraiser was started to help push for Justice For Berkeley, and nearly $5,000 had been raised by mid-day Tuesday. Buxton said the money would cover veterinary bills, and she planned to donate to animal rescue locations.

Of the man she believes caused Berkeley’s death, Buxton said, “I’ve never hated somebody so much in my life. I have never been in so much pain. I want him to see what he’s done.”

Buxton said her only source of comfort is that she found Berkeley when he was still alive, and she got to spend the last two hours of his life with him.

She said she was grateful for the efforts by police to so quickly cite a suspect.

“For me to have talked to them a little over a day and a half ago to have an arrest this soon, I have so much gratitude to them, I can never thank them for how kind they have been and how supportive they have been,” she said.

Scammers appealed to the pet-loving public, making a plea for donations from people impacted by the loss of a pet black Labrador that was shot in Danville.

Unfortunately the Court system will impose no penalties or consequences. Happens over and over in Vermont. Just like in the horrific Eden cruelty case.

While this sounds completely unjustified as written, it might be a good idea to pause, take a breath and hear from the alleged shooter before we get out the torches and pitchforks. Curiously absent from this report is any mention of that side of the story.

DEK I too do not like one sided reporting, what's up with that?

Anyone who shoots a nonagressive dog or cat deserves the same. Unfortunately the law can't adequately punish this man. The only protection for our pets from evil people like this man is to keep them nearby and on our own property at all times. My sympathy for your loss.

Rhode Island legislature gets back to work on major matters

As virus rages in US, New York guards against another rise