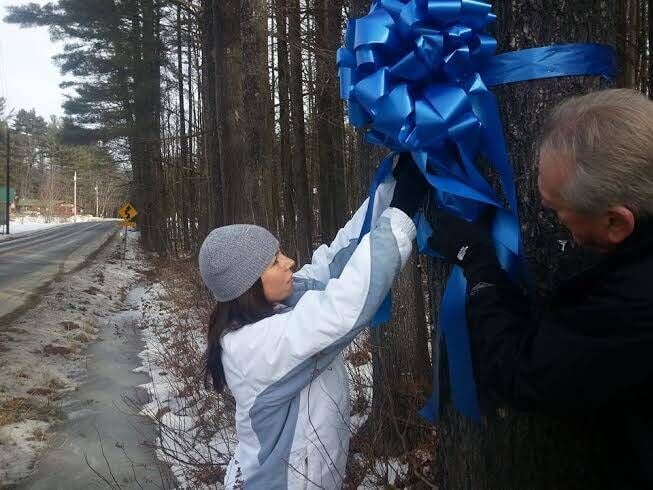 In February 2014, marking the 10th anniversary of Maura Murray's disappearance, Julie Murray, left, sister of Maura, and Fred Murray, father of Maura, attach a blue ribbon to the tree at the spot where Maura vanished on Feb. 9, 2004. Today, the Murray family submitted a petition and application to the state in their request for a permanent historical marker at the site. (Courtesy photo) 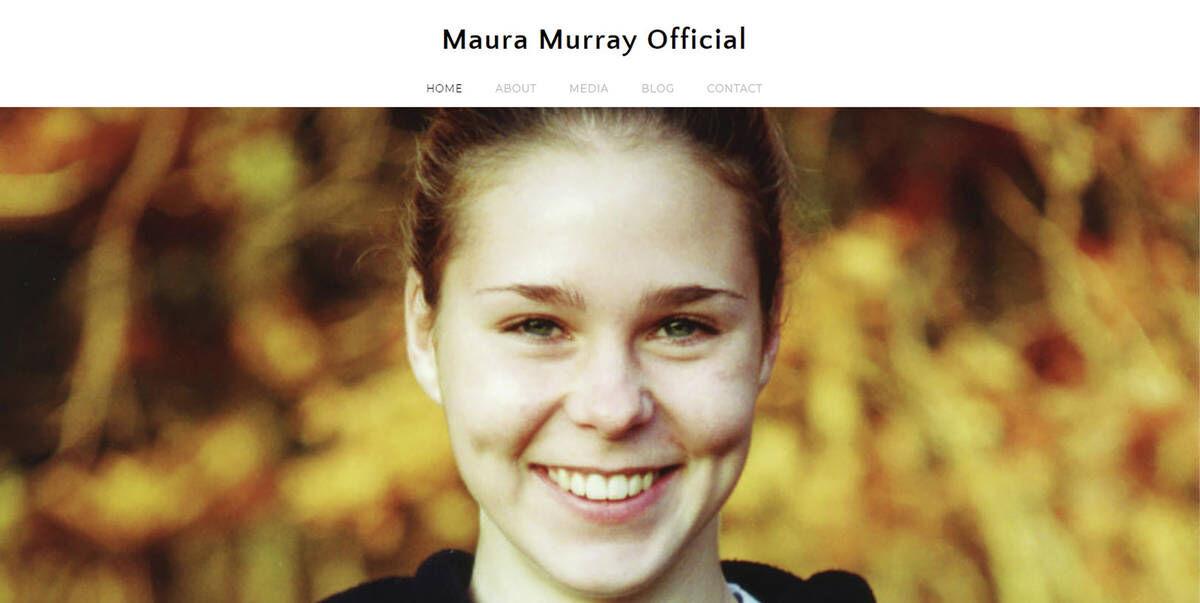 Maura Murray, in a photograph on the official Murray family web site that launched in May. (Courtesy photo)

In February 2014, marking the 10th anniversary of Maura Murray's disappearance, Julie Murray, left, sister of Maura, and Fred Murray, father of Maura, attach a blue ribbon to the tree at the spot where Maura vanished on Feb. 9, 2004. Today, the Murray family submitted a petition and application to the state in their request for a permanent historical marker at the site. (Courtesy photo)

Maura Murray, in a photograph on the official Murray family web site that launched in May. (Courtesy photo)

The disappearance of Maura Murray has become a part of New Hampshire history.

It left a family grief-stricken and searching for answers, and being among the first missing persons cases in the age of social media, it has attracted the interest of thousands of people from across the nation and world.

The case has also drawn scores of people annually to the spot where Maura disappeared, along Route 112 in Haverhill near the Weathered Barn.

To remember Maura, her family, for the better part of two decades, has kept a blue ribbon attached to a tree along the roadside that marks the spot where she vanished on the evening of Feb. 9, 2004.

With that tree now at risk of being taken down by the property owner, the family is asking the state for a New Hampshire state highway historical marker to be installed at the location as a permanent recognition of Maura’s disappearance.

At noon today, the Murray family, state Rep. Debra DeSimone, R-Atkinson, and local residents will submit in person an official request and marker application to the New Hampshire Division of Historical Resources in Concord.

Anyone seeking a marker to commemorate a significant person, place or event in New Hampshire can submit the formal request to DHR with a petition signed by a minimum of 20 New Hampshire residents.

The petition submitted with the Murray request netted the signatures of 680 New Hampshire residents, and in total, has more than 3,000 signatures.

“Thousands of residents and visitors travel to where Maura was last seen on Route 112 every year as her disappearance has become one of the most high-profile unsolved mysteries in the world,” said Julie Murray, Maura’s sister. “We are proud to support Rep. DeSimone and the 3,367 petitioners requesting a historical marker be erected where Maura was last seen before disappearing without a trace.”

The request includes draft marker text that was voted on by 724 supporters, letters of support from the Murray family and DeSimone as well as from Robert McDonald, professor of history at the U.S. Military Academy at West Point in New York, which Maura had attended, and pen-and-ink and online petitions with the 3,367 signatures from people in all 50 states, Washington D.C., Puerto Rico, and 42 different countries, said Murray.

Julie Murray said, “We are thankful to have an elected official in the effort to fight for this important historical marker.”

On Thursday, DeSimone said the Murray family was brought to her attention by one of her constituents, Joe Davey, of Atkinson.

“I feel for the property owners and understand it’s an encroachment upon their life,” said DeSimone, a mother and grandmother. “I also feel for the Murray family and my heart is broken for them. I cannot in my wildest dreams imagine losing a child in this manner. To not know where my child is, if my child is alive or not, is unimaginable. I will honestly tell you I will do everything possible to assist them in their quest.”

DeSimone has been in discussions with state officials for a solution, and while she doesn’t yet know what can or cannot be done, she said a way will be found to give the Murray family a contact point, and if not a marker, some other point.

“I want to find some sort of peaceful way for this family to go to a place and pray and have some sort of vigil,” said DeSimone.

In July, after it was learned the property owner was looking to cut down the tree, the Murray family, in partnership with residents in New Hampshire, launched a Blue Ribbon campaign to support the request for a historical marker.

After the submitting the petition today, the Murray family and DeSimone will drive to Haverhill to visit the blue ribbon tree with volunteers and participate in a boots-on-the-ground search.

Avlon: To defend our democracy just follow the law

Led by Nancy Cory, the search will have about 20 volunteers, some coming from as far as Maryland, who will focus on areas along Interstates 93 and 91, as well as areas along the Kancamagus Highway, said Murray

Maura was a 21-year-old nursing student at the University of Massachusetts-Amherst when she vanished after crashing her car at the location on Route 112.

Some speculate she might have run away to begin a new life, ran into the woods and succumbed to the elements, or was suicidal.

Others, including the Murray family, believe she was grabbed by someone and is the victim of foul play and likely no longer alive.

They are hoping that someone with information as to what happened will come forward.

Maura’s disappearance became a cold case after the New Hampshire Cold Case Unit was established in 2009.

She is officially classified as a missing person and Senior Assistant New Hampshire Attorney General Jeffery Strelzin has called the case a criminal investigation into a missing person.

After the initial police searches in 2004, volunteer searches have taken place through the years to find Maura and, in the words of her father, Fred Murray, bring her home.

In his letter of support to the DHR, McDonald, who knew Maura when she was a cadet at West Point and who helped search for her in New Hampshire in 2004, said even today, more than 16 years after her disappearance, the “unsolved mystery” continues to inspire interest as well as television specials, pod casts, and blogs.

“As a historian, it strikes me that there are two factors giving this missing person case special significance,” wrote McDonald. “First, there is the blockbuster nature of the event, which captured the attention of the American people like few others. Indeed, Maura Murray has been ranked alongside aviation pioneer Amelia Earhart as one of the 14 most famous missing persons in American history … Second, there is the fact that this has been dubbed the first crime mystery of the social media age.”

As for the spot along Route 112, McDonald said it is “a place of great significance for countless others who have learned of her life and taken an intense interest in the mystery of her disappearance. It is without a doubt a historic place as it was the location of a historically significant event.”

Once a request for a historical marker is submitted, it typically takes several months for the committee at the DHR to make a decision and that decision will probably come some time in the spring, said Murray.

“Based on my most recent conversation with the land owners, they still intend to cut down the tree,” she said. “My family remains prepared to do whatever is necessary to save the tree, to include our offers to purchase or lease the property from the current landowner.”

If those negotiations are not successful and a historical marker is ultimately approved, Murray said the marker would likely be installed some time in 2021.

With no grave to visit or ashes to scatter, Murray said the spot where her sister disappeared has become a sacred place for her family and serves as a symbol to remember and honor Maura.

In her family’s letter to the DHR asking for a marker, she said Maura’s disappearance not only forever changed the course of her family’s history, but also had profound and reverberating effects on New Hampshire, including on the state’s residents, visitors, public officials, and all branches of state government.

She thanked everyone who has supported the effort for permanent recognition.

“The outpouring of support from all across the world is nothing short of amazing,” said Murray. “We truly have a tremendous support system and are so grateful for this community. It energizes us and provides hope that we will find Maura.”

The blue ribbon on the tree along Route 112 in Haverhill that honors Maura Murray and marks the spot where she vanished more than 16 years ago is again in jeopardy.