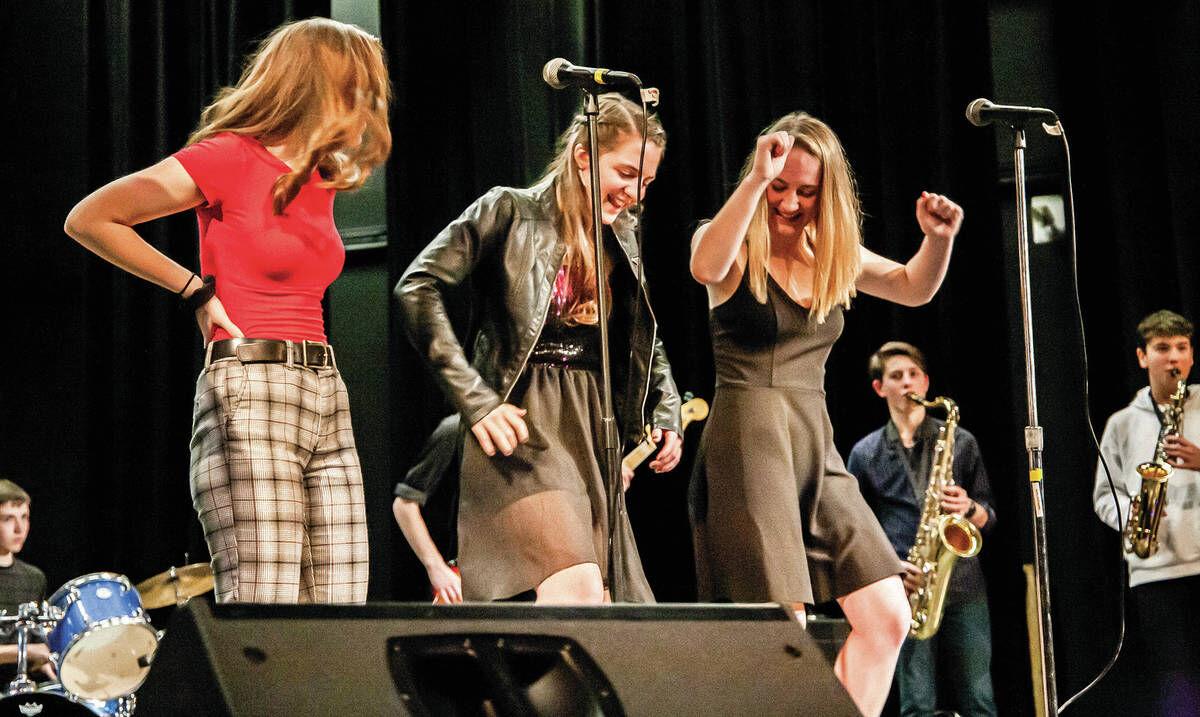 The Kingdom All Stars perform at First Night North in St. Johnsbury on Dec. 31, 2019. This year's event will move into a virtual space in response to COVID-19, and the All Stars will perform among a select number of acts. (Photo Courtesy of Derek Campbell Fauxtography) 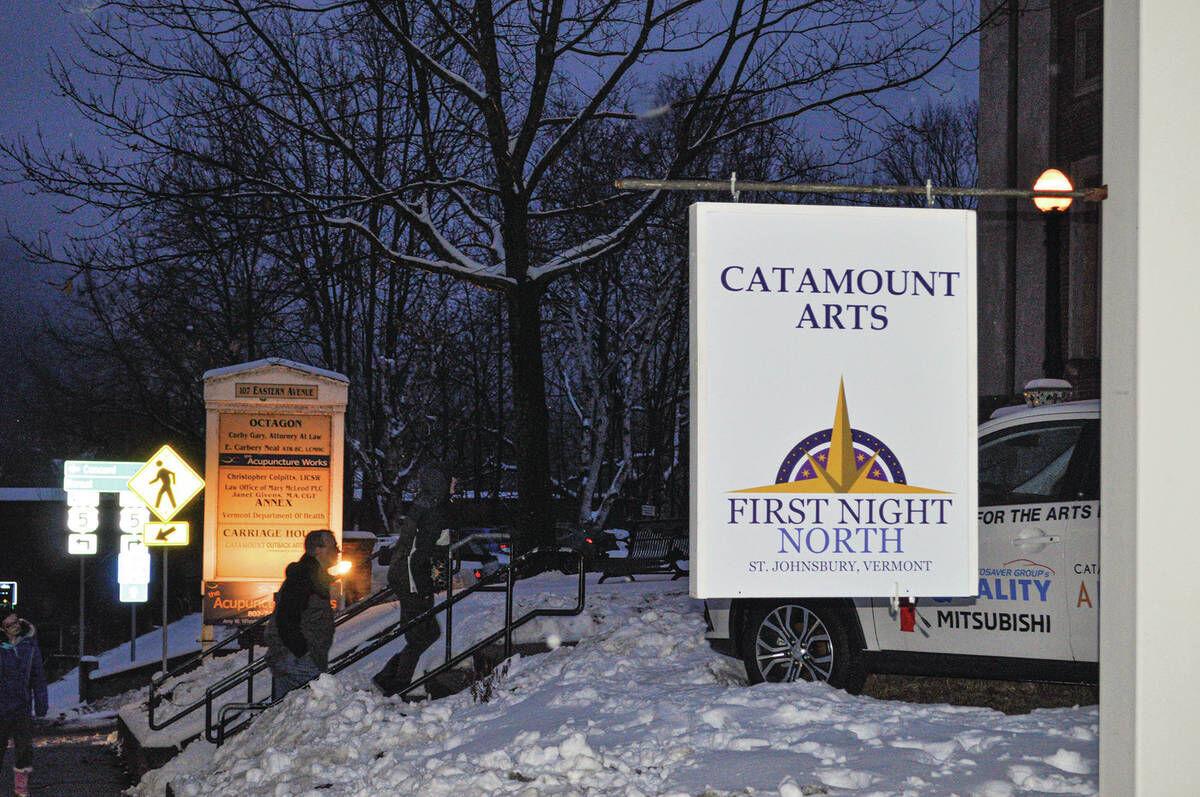 A sign outside Catamount Arts in St. Johnsbury notes First Night North on Dec. 31, 2019. Catamount Arts presents the annual event and serves as one of the venues for entertainment. This year, the COVID-19 virus will force the entertainment viewing into a virtual space. (File Photo by Amy Ash Nixon) 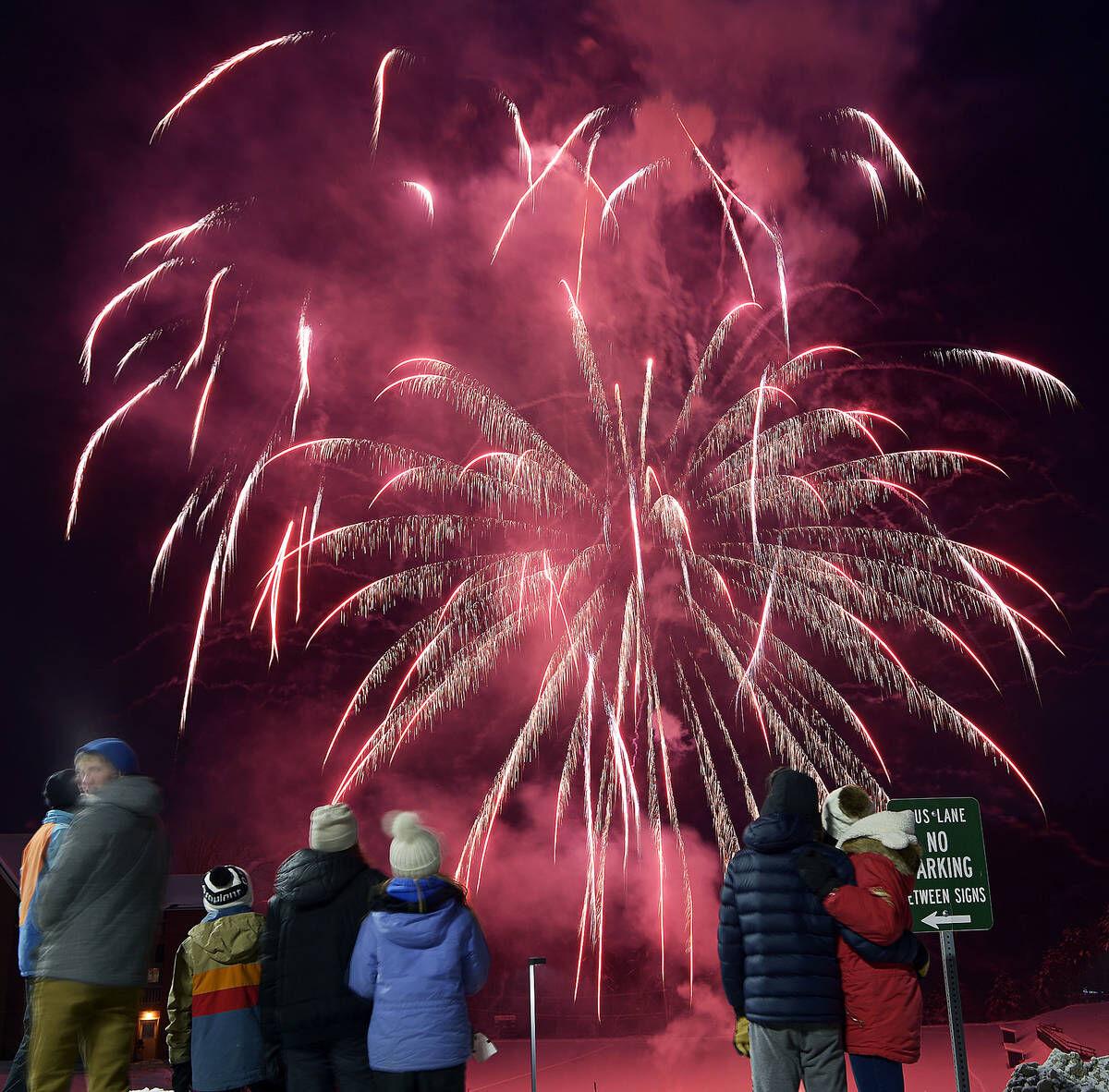 In this file photo from the 25th annual First Night North celebration, midnight fireworks light up the sky on Monday, Jan. 1, 2018. There will be no fireworks this year as the entertainment will be presented virtually as a precaution against infection from COVID-19. (Photo by Paul Hayes)

The Kingdom All Stars perform at First Night North in St. Johnsbury on Dec. 31, 2019. This year's event will move into a virtual space in response to COVID-19, and the All Stars will perform among a select number of acts. (Photo Courtesy of Derek Campbell Fauxtography)

A sign outside Catamount Arts in St. Johnsbury notes First Night North on Dec. 31, 2019. Catamount Arts presents the annual event and serves as one of the venues for entertainment. This year, the COVID-19 virus will force the entertainment viewing into a virtual space. (File Photo by Amy Ash Nixon)

In this file photo from the 25th annual First Night North celebration, midnight fireworks light up the sky on Monday, Jan. 1, 2018. There will be no fireworks this year as the entertainment will be presented virtually as a precaution against infection from COVID-19. (Photo by Paul Hayes)

ST. JOHNSBURY — The weather every Dec. 31st plays a role in the experience of First Night North, but this year a different kind of forecast is making an impression.

For the past 27 years Catamount Arts has made St. Johnsbury the destination for New Year’s Eve First Night celebrations, bringing crowds of people together in multiple locations to enjoy many talented performers. Last year, there were over 250 performers entertaining appreciative audiences in venues along Main Street, Western and Eastern avenues.

This year the usual streets and performance spaces will be empty, but the show will go on.

The weather outside may be frightful, but for the upcoming First Night, entertainment seekers can tune in from the comfort of their own homes. Kingdom Access Television will be broadcasting First Night North acts from 4 p.m. to midnight. Performances will also be available online through Catamount Arts.

Also, no button purchases are necessary; viewers can watch for free.

Because there can only be one act shown during each time slot over the eight hours, the number of acts broadcast will be smaller than a typical multiple-venue, live performance First Night. The plan is for 25 acts.

“There will be a good mix of musical acts, story-telling, puppeteering, stand-up, magic,” said Van Zandt. “We do have a wide variety. It was very important to make sure we had a program that suited everyone’s interest.”

She said the complete lineup has not been finalized, but promised three crowd-pleasing acts will be part of the mix: Bob and Sarah Amos, the Kingdom All Stars and the Modern Times Theater.

“We were so happy to be invited,” said Bob Amos on behalf of himself and Sarah. “I’m so glad they figured out a way to make this happen. New Year’s wouldn’t be the same in St. J. without First Night!”

Todd Wellington, director of the All Stars, called the invitation to be a part of the select 25 acts “a tremendous honor. One that the kids in our band have earned through years of hard work, dedication, innovation and a commitment to each other. Thank you Catamount Arts and First Night for recognizing this and celebrating them.”

Amos and Wellington said performance restrictions due to COVID have dealt a significant blow to the music groups.

“The pandemic was crippling for us because it strikes at the heart of our long-standing approach of peer-to-peer inspiration,” said Wellington. “How do you build a band based on togetherness and comply with the state COVID guidelines which are designed to separate and reduce interaction? We almost shut down at one point, but we’re still operating because the band members made it clear it had to continue.”

Said Amos, “We are normally very busy from late spring through early fall with live performances, but they were all cancelled this year. So these video online performances are very nice to have. Thank goodness for the technology that allows us to do these types of things!”

'This Is Life': An emotional bootcamp to help boys become men

“It was important for us to move forward with some sort of celebration to celebrate the local artists, along with the coming of the new year,” she said. “When you think about First Night you think of celebrating the new year and enjoying entertainment, and we want people to know that the arts are still here and are thriving and these (performers) are your neighbors. We wanted to be sure to highlight them.”

But while the music and magic of First Night will continue despite the pandemic, there will be no fireworks display.

“That (decision) punched my gut a little bit. I am such a huge fan of fireworks,” said Van Zandt. “Because it’s everyone getting together in a large group, it didn’t seem like the right choice when we should be social distancing.”

The performances will be pre-recorded and the First Night crew will create the line-up, assigning acts to the different time slots. Van Zandt said between some of the performances there will be “video surprises.” They will include messages from special guests and shouts-out to the event’s sponsors.

Van Zandt said the on-screen presentation of this year’s First Night will be an opportunity for some of the acts to fine tune the technical aspects of creating a quality recorded performance.

Amos said he has done quite a few online performances since March and expects he and Sarah will record from his home recording studio.

Wellington would not divulge the location where the All Stars will gather and record their set. “All I can tell you at this point is that it will be local and that it will feature new original songs written by Aden Marcotte, Siri Jolliffe and Jazmine Bogie, with equal contributions by Liza Morse, Zane Mawhinney, JD Miller and others.”

The All Stars have been playing First Night since 2008.

He said the technical aspects of playing a show for a virtual audience have been achieved by the All Stars during the pandemic. “We’ve played several live streams from ‘The Garden of Groovin,’” he said.

Both Wellington and Amos said the absence of a congregated audience is unfortunate.

“The natural exchange of energy that drives both sides is gone,” said Wellington. “So you have to be prepared for it. To understand people are reacting — but you just can’t hear them or see them. So, it’s harder to maintain that energy, however our band has dealt with this by interacting more with each other while playing and that’s been a lot of fun to watch.”

From a musical perspective, Amos said for him there’s not much difference between playing to a live audience or in front of a camera. “Once a song begins, I pretty much immerse myself in the song itself,” he said. “But I do miss the back and forth interactions with the audience between songs, and being able to see the individual faces. I work around it with situations like these by imagining people there.”

Can you solve these real 'Jeopardy!' clues about comedy movies?

States doing the most and least COVID-19 testing