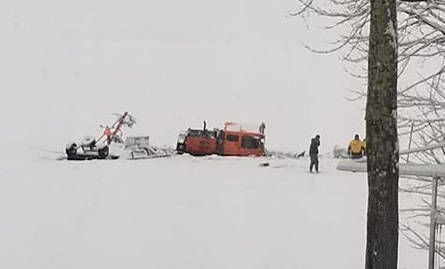 This photograph shows the groomer when it broke through the ice early Monday morning. (Courtesy Photo) 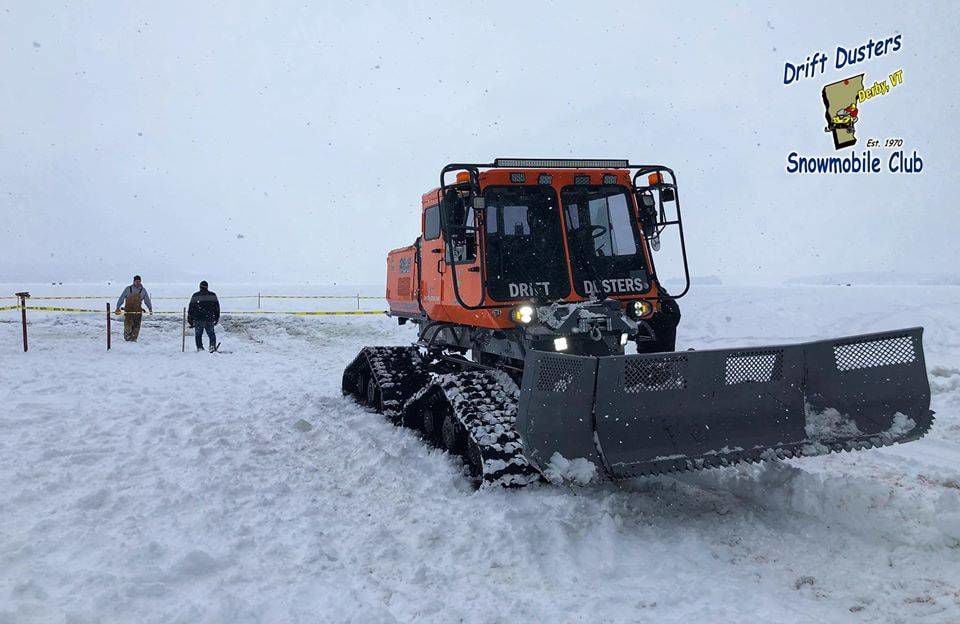 The Drift Dusters snowmobile club groomer rolls away from the ice on the eastern shore of Lake Memphremagog Monday morning. (Courtesy Photo)

This photograph shows the groomer when it broke through the ice early Monday morning. (Courtesy Photo)

The Drift Dusters snowmobile club groomer rolls away from the ice on the eastern shore of Lake Memphremagog Monday morning. (Courtesy Photo)

DERBY — A snowmobile trail groomer broke through ice into shallow water near the eastern shore of Lake Memphremagog at 6 a.m. Monday.

John Jacobs, who was operating the Drift Dusters Snowmobile Club groomer, was not injured and the groomer is out and was not damaged, said Roger Gosselin of Drift Dusters.

Jacobs was grooming Trail 105 to Lake Memphremagog when he turned around just offshore on the lake and went through the ice, Gosselin said.

The location is off Lindsay Beach, according to onlookers on social media.

The groomer broke through 20 inches of ice and into three and a half feet of water, Gosselin said. He said they measured the ice at the location.

Gosselin said it was lucky that the drag, which smooths the trail behind the groomer, did not go through.

RG Gosselin Inc. and Gosselin Water Wells of Derby sent an excavator to assist. Track Inc. of Newport also responded. The groomer is a Track machine.

Gary Young, administration and finance manager of Track Inc., said that a Track Inc. employee was able to drive the groomer out of the ice under its own power with some help from the excavator.

The groomer will be out of commission for a couple of days.

“The machine will be getting a ‘spa day’ at Track Inc. today and tomorrow,” Gosselin said.

Gosselin urged snowmobilers to use caution in the area “as there is now a large hole in the ice. It is well marked.”

Young warned about going on the ice. He’s not the only one.

The Vermont Fish and Wildlife Department is urging people to monitor ice conditions before going onto frozen lakes, particularly after a substantial snowfall, The Associated Press reports.

The area received a foot and a half Thursday through to Friday and another five or six inches Sunday night into Monday.

“We are urging all outdoor enthusiasts — people going ice fishing, cross-country skiers, hikers, and snowmobilers — to be cautious and prepared if they are going out on the ice.”