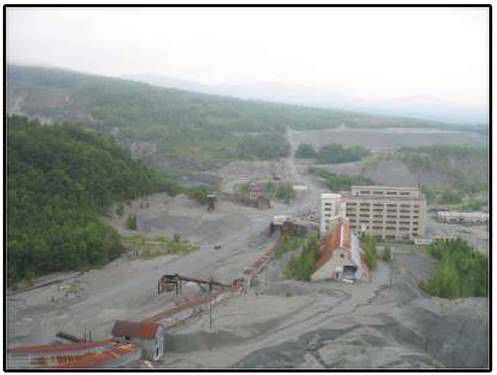 Some 30 million tons of asbestos waste tailings from the now-closed Eden-Lowell mine in Vermont, pictured here, could be transported to Groveton for processing if a processing plant for the North Country town is approved. (Photo courtesy of the Vt. Agency of Natural Resources) 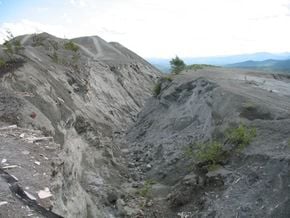 Some 30 million tons of asbestos waste tailings from the now-closed Eden-Lowell mine in Vermont, pictured here, could be transported to Groveton for processing if a processing plant for the North Country town is approved. (Photo courtesy of the Vt. Agency of Natural Resources)

GROVETON — A proposal that has been in the works for several years is now coming to light - an asbestos processing plant in Groveton, which the developer said has the natural gas pipeline to make it work.

The plan - still preliminary, far from any approval, and facing challenges - stems from the federally mandated cleanup of the now-inactive 1,540-acre Eden-Lowell asbestos mine at Belvidere Mountain in Vermont that, until the health dangers of asbestos became widely known, had been run by the Vermont Asbestos Group before it was shut down more than 20 years ago.

In 2013, Vermont Asbestos Group, co-owned by Howard Manosh, of Morrisville, Vt., reached a settlement with the Vermont attorney general and the U.S. Environmental Protection Agency in regard to the group’s liability.

The plan calls for the transportation, during the course of several decades, of some 30 million tons of asbestos mine tailings and waste rock contaminated with asbestos from the Vermont mine to a processing plant, which would convert it into chemicals to be used in manufacturing.

“This has been five years in the making and would be another five years before it’s done,” Manosh said Tuesday. We’ve been working on it for quite a while … Hopefully, we can get something because I think it’s a good chance to re-mediate the waste piled up there and use it for a constructive purpose.”

A critical goal that needs to be reached before a plant could go forward is securing funding from an investment group, a process that is ongoing, he said.

“It would be about a $200 million investment, a sizeable investment,” said Manosh.

If the proposal moves forward in Groveton, the plant would be located in an area on the former Wausau Paper mill now owned by Bob Chapman, of Gorham.

“Groveton wants it and they have the necessary energy, the natural gas pipeline, which makes it feasible,” said Manosh.

Manosh said he is not aware of any meeting or public hearing dates in the near future. An inquiry made to the Groveton town office asking if a paperwork process has begun and if there is a time line going forward was not immediately returned.

Pau Gasol on helping others after retiring from the game

Disney's 'Raya and the Last Dragon'

Groveton Board of Selectmen Chairman James Weagle could not be reached for comment and it was undetermined if selectmen are supportive of the proposal, if they will be working to facilitate it, and if a public information meeting will be scheduled any time soon.

According to an Aug. 17 story in the the Morrisville-based News and Citizen, 15 to 17 truckloads of asbestos waste from the Vermont mine would be delivered to the Groveton plant daily from May through November.

About 75,000 cubic yards of the total 25 to 50 million cubic yards of asbestos waste would be transported to Groveton annually for the “energy intensive” conversion that would process it into hydroxide and magnesium oxide.

One challenge will be preventing dust and the spread of asbestos outside of the Eden-Lowell mine area, both of which are prohibited under the 2013 agreement. The asbestos tailings and other waste would be wetted during extraction to prevent dust and covered until they reach the interior of the Groveton plant.

Manosh said the state of Vermont and EPA are on board with the plan.

In N.H, a plant would require an extensive local, state and federal permitting process to ensure safety standards are met.

The Eden-Lowell mine, in operation until 1993, had been one of the world’s largest makers of white asbestos, which was used in construction materials and vehicle brake pads until the mineral was deemed a health hazard that causes mesothelioma and lung cancer if inhaled.

Under the 2013 settlement agreement, Vermont Asbestos Group agreed to reimburse the state and federal governments for prior cleanup, and agreed to a $3.3 million judgment to the EPA and $174,620 to the state of Vermont, as well as paying $50,000 in cash within a 10-year period to pay for erosion mitigation and mine security, according to the News and Citizen.

The Caledonian-Record contacted EPA representatives Tuesday to determine the extent of that agency’s involvement with the plan. That information will be included in a future story.