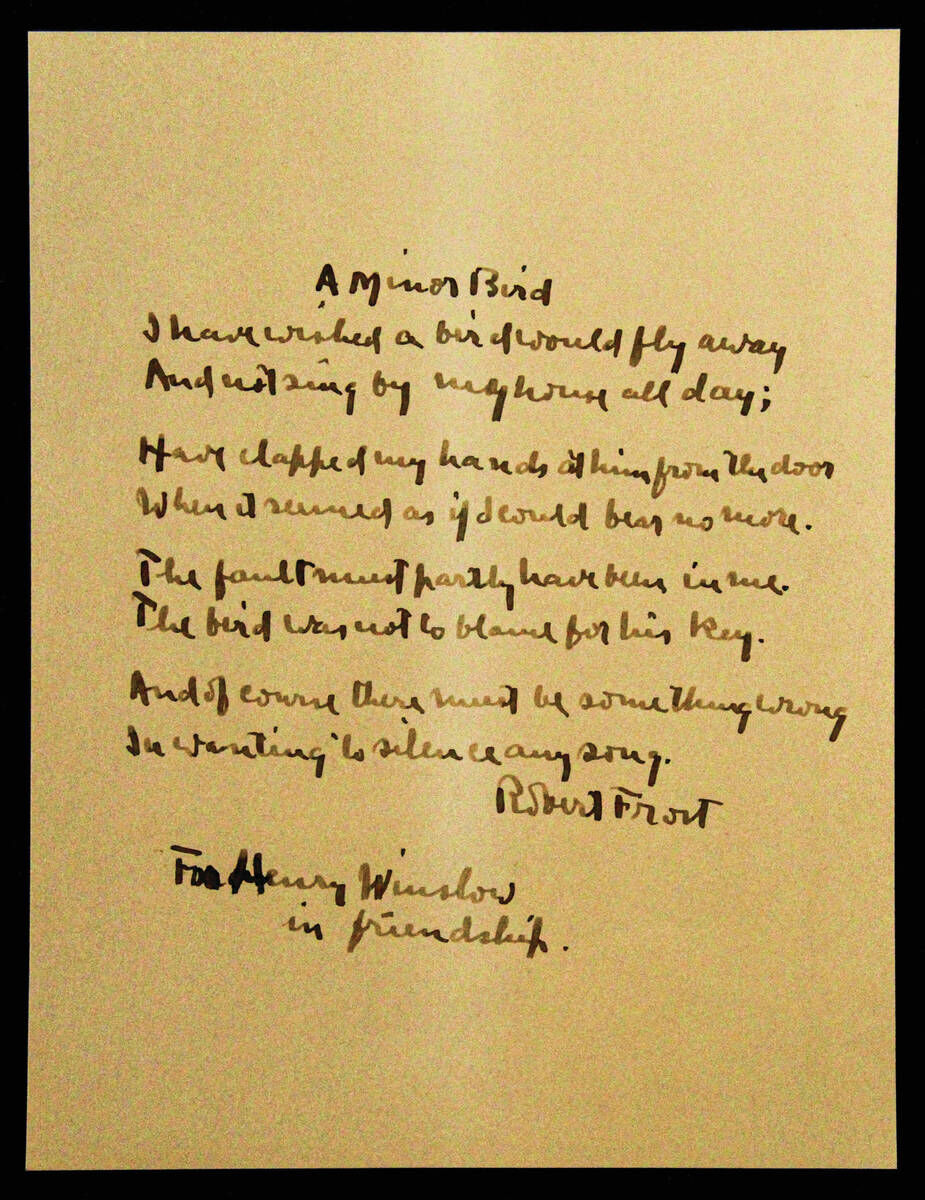 In the St. Johnsbury Academy archives is a poem by Robert Frost handwritten by the author. (Courtesy Photo) 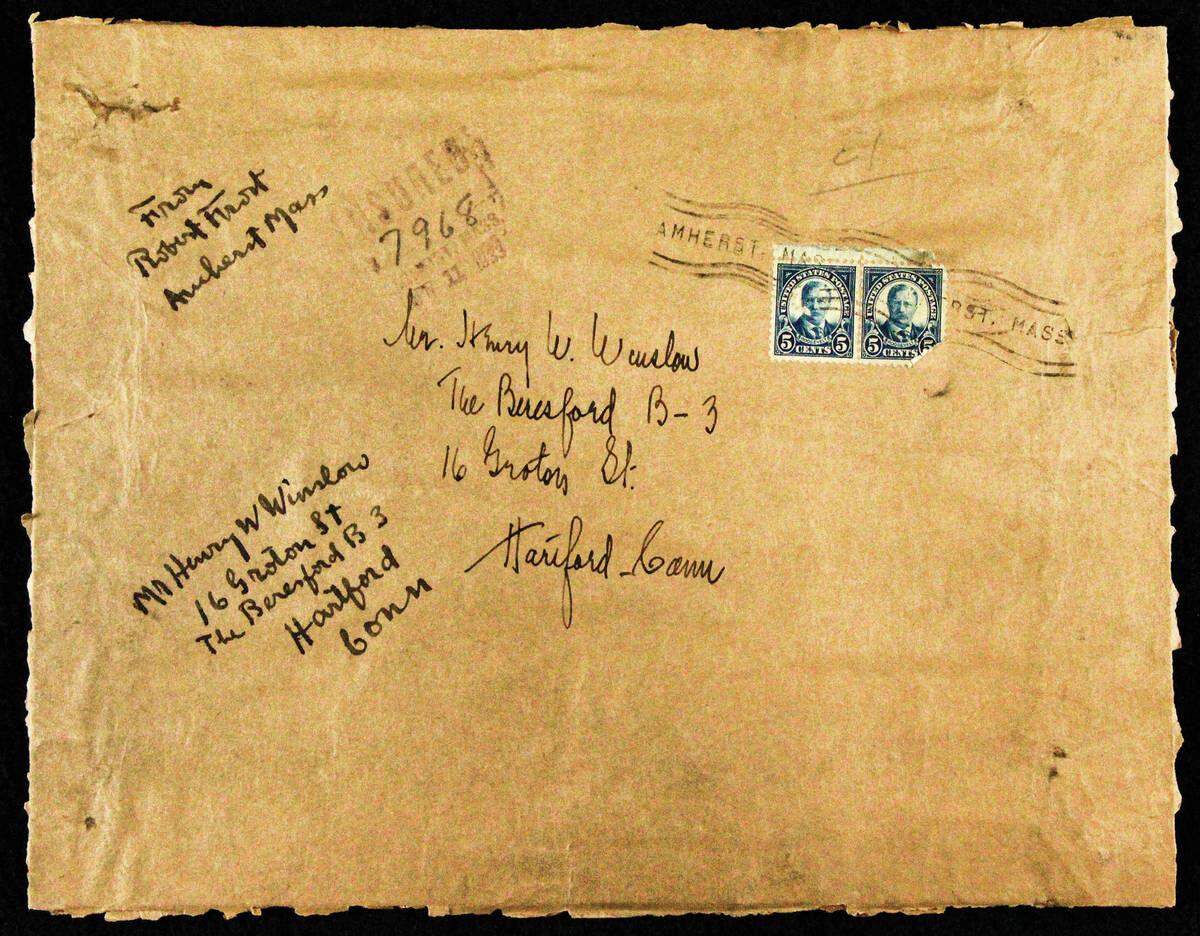 Pictured is the envelope poet Robert Frost sent one of his poems in to a Henry Winslow. The envelope and poem are in the St. Johnsbury Academy archives. (Courtesy Photo)

In the St. Johnsbury Academy archives is a poem by Robert Frost handwritten by the author. (Courtesy Photo)

Pictured is the envelope poet Robert Frost sent one of his poems in to a Henry Winslow. The envelope and poem are in the St. Johnsbury Academy archives. (Courtesy Photo)

Benjamin Barnes began the enormous task of inventorying and evaluating the St. Johnsbury Academy archive last spring to keep busy while the school’s library was closed during the pandemic. Over the course of the last eight months Barnes has found many treasures, but his best discovery came earlier this month.

Hidden away in an inconspicuous manila folder Barnes discovered a handwritten verse by the famous American poet Robert Frost.

Entitled ‘The Minor Bird’, the poem was discovered by Barnes in the Document Room of the St. Johnsbury Academy archives.

“I was actually searching for a photo of Grace Stuart Orcutt the woman our library is named after,” he said. “I didn’t end up finding a picture, but I was looking through a filing cabinet and came across the poem. It was carefully tucked away in a protective sleeve in the folder along with the envelope it came in. But I couldn’t find any record of it in old catalogues. It was safe but not recorded.”

‘The Minor Bird’ was published in 1928 in Frosts book ‘West Running Brook’; it is one of his lesser-known poems.

Frost was born in 1874 in San Francisco. His family later relocated to Massachusetts and he spent much of his life in New England. Facing frequent rejection of his poetry in the United States Frost moved to England for several years and garnered more success before returning to his home country. He went on to pen several poetry books and win four Pulitzer Prizes. President John F. Kennedy honored Frost when he requested Frost read a poem at the president’s inauguration in 1961.

In the 1920s Frost moved to Vermont seeking better farmland as he was not only a poet but a farmer and teacher. Frost lived in Vermont on and off through out his life, spending many summers in the Northeast Kingdom. Vermont has named several locations after Frost including the Robert Frost picnic area, the Robert Frost Interpretive Trail and Robert Frost Memorial Drive. Frost was named the poet laureate of Vermont in 1961. Frost’s most famous poems include ‘Fire and Ice,’ ‘The Road Not Taken’ and ‘Acquainted with the Night.’

Frost sent The Minor Bird poem to a friend named Henry W. Winslow. Barnes was unable to find a record of Winslow attending St. Johnsbury Academy as a student or working as a teacher. However, Barnes did learn that Winslow was a writer in the early 1920s around the same time Frost relocated to Vermont.

Winslow went so far as to pen an article about his familiarity with the poet and other artists in the state in ‘The Vermonter’ in 1921 titled ‘The Literary “F”’. Winslow describes Frost as “real and earnest, just as life is real and earnest and splendid.” The friendship was reciprocal as Frost signed ‘The Minor Bird’ poem ‘For Henry Winslow in friendship’.

I have wished a bird would fly away,

And not sing by my house all day;

Biden chief of staff vows 'message of unity' at inauguration

Have clapped my hands at him from the door

When it seemed as if I could bear no more.

The fault must partly have been in me.

The bird was not to blame for his key.

And of course there must be something wrong

In wanting to silence any song.

Handwritten poems by Robert Frost are rare and quite valuable. Another poem written in the same manner to another of Frost’s friends has sold for thousands of dollars. When asked what the Academy plans for the poem were, Barnes said, “It has been catalogued and put away but I want to make a big poster of it to display in the library so people can still see it while the document is kept safe in the archives.”

Barnes began working at the St. Johnsbury Academy library three years ago but only started working in the library archive during the quarantine. In that short time, he has entered over 2,500 items into his new digital catalogue but has thousands more to go. His interest in archiving stems from a personal fascination with history as well as his work in historical renovations of buildings.

Other interesting things Barnes has discovered are old sporting uniforms, photos of past classes and among his favorite discoveries are old signature books. Items in the archive come from many places, individuals’ attics, alumni donations or occasionally people will drop off items they find related to the school.

Articles such as the Robert Frost poem are very delicate due to their age. Barnes said he has been careful with how he documents them. “I use photography instead of scanning because pushing on the old paper can be harmful and a lot of the items in our catalogue are 3D, so photography works best,” he said.

With assistance from other departments at the school Barnes was able to set up a mini studio with lighting and display stands to photograph notable pieces for the catalogue. The Robert Frost poem is one notable item that has emerged from the archive, and as the poem says its song is not silenced.

Democratic Party history from the year you were born

Worst TV show released the year you were born

100 colleges with the best ROI

Art history from the year you were born

50 ways air travel has changed over the last 100 years

Community colleges whose graduates earn the most money