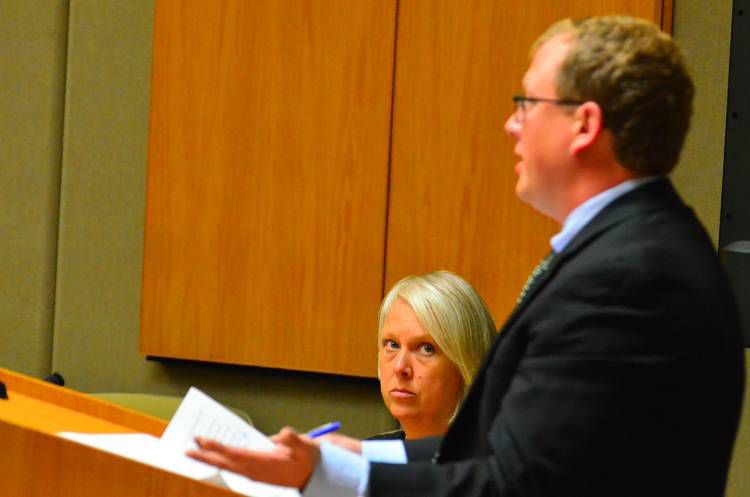 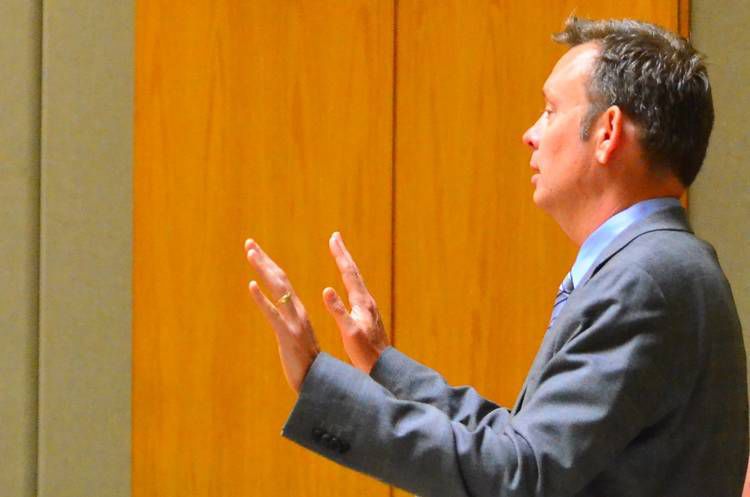 Attorney Kirk Simoneau, representing Nicole Guida, who owned a Littleton antique shop, argues the swastika case is not about the First Amendment but was a deliberate attempt to put his client out of business. (Photo by Robert Blechl)

Attorney Kirk Simoneau, representing Nicole Guida, who owned a Littleton antique shop, argues the swastika case is not about the First Amendment but was a deliberate attempt to put his client out of business. (Photo by Robert Blechl)

NORTH HAVERHILL — It’s a case that grew out of a pre-Nazi era swastika symbol on an antique flour sack displayed in a Littleton antique shop, and it’s now testing the boundaries of free speech.

In the end, the judge will have to decide just what kind of case it is - a First Amendment one that protects a Bethlehem woman for allegedly calling the shop owner a racist or one of defamation and a deliberate attempt to run her out of business.

On Tuesday, Grafton Superior Court Judge Lawrence MacLeod heard both arguments and will begin considering a motion to dismiss the lawsuit brought by Nicole Guida, owner of the now-shuttered Chic & Unique in Littleton, against Katherine Ferrier, of Bethlehem, gallery manager for the Women’s Rural Entrepreneurial Network.

“There is no case like this where any judge has said this type of case is subject to civil remedy,” said Michael Lewis, representing Ferrier, in his argument to dismiss. “This case has to stop now.”

Citing U.S. Supreme Court and N.H. case law, he argued, “No matter how offensive it is, it is protected by the First Amendment.”

Ferrier, he argued, was trying to have a discussion with Guida about “perhaps the most fraught symbol of evil in the history of mankind” and that discussion did not go well.

But public discussion is a political duty and fundamental principle of government, acts of expression are central to free speech, and courts have upheld under the First Amendment speech that is far more offensive, said Lewis.

Attorney Kirk Simoneau, however, representing Guida, called Lewis’ argument a “red herring” and said the case is not about the First Amendment.

“You can’t yell fire in a crowded theater,” said Simoneau. “And you can’t yell racist on social media unless someone is one.”

Simoneau said if he were to wrongly call someone a murderer or drug dealer it, too, would constitute defamation.

“One of the most horrible things you can call someone is a racist,” he said.

Simoneau argued that Ferrier told Guida, “‘I’m going to shut you down,’ and she hatched a plan and went forward.”

In February, Guida filed a six-count lawsuit against Ferrier for allegedly labeling her a racist on Facebook for her display of the 1912 flour sack from the Lucky Flour company that Guida said she had told her is an American antique with no connection to Nazi Germany.

She alleges Ferrier put her in a false light, negligently and intentionally inflicted emotional distress, and interfered with her business to an economic detriment.

In her pleading, Guida said she told Ferrier that the symbol had for centuries signified good luck, was used by native peoples, and she had regularly displayed antique flour sacks in her store.

But after the initial Nov. 26 encounter at the store, Guida, in her complaint, argues Ferrier launched a Facebook campaign to publicly shame her, wrongly accuse her of being a racist, and interfere with her business without regard to the truth. In early February she closed her store, citing negative reviews and low sales from the campaign.

According to Guida’s complaint, Ferrier called her a “racist” and “anti-Semite” and referred to her as “disgusting” in front of her children and, before leaving the store, said she would make sure everyone in the community knew she was a racist and ensure no one would shop at her store again.

The result, alleges Guida, was damage to her reputation and emotional distress that led to anxiety and depression.

Ferrier was present in the courtroom Tuesday, but Guida was not.

“My client isn’t here because she has been bullied and would continue to be bullied,” said Simoneau. “She, too, has been put through a gauntlet.”

Lewis, who is representing Ferrier at no legal cost, argues that allowing the case to go forward would burden Ferrier’s right to have a discussion about a symbol that is synonymous with the Holocaust and the murder of millions.

Ferrier was reacting to a symbol and put her thoughts on Facebook after she asked questions of Guida and was “met with one of the most warped descriptions of the history” of the symbol, said Lewis.

In a Dec. 9 letter to The Caledonian-Record, Ferrier called the flour sack offensive, particularly in light of a post-election rise in hate crimes, many involving swastikas, and said displaying it without any accompanying disclaimer or context can harm a community.

Simoneau, however, argued Guida was merely selling the sack in a store and explained how it was not connected to World War II.

“This isn’t the First Amendment,” said Simoneau. “This is a purposeful attack … Defamation was the vehicle by which Ms. Ferrier purposely interfered … She knows her consequences were intended to shut down somebody’s business.”

MacLeod said he will take the motion to dismiss under advisement but did not say when he will issue an order on it.

Guida seeks a jury trial and unspecified damages to be determined by a jury.

According to Guida’s complaint, the incident might have been sparked by the election victory of Pres. Donald Trump.

According to Guida’s complaint, Guida smiled at Ferrier when she walked in the store that day, but Ferrier, noting the sack hanging behind the cash register, allegedly said to Guida, “that Trump-winning smile, in front of your symbol of hate.”