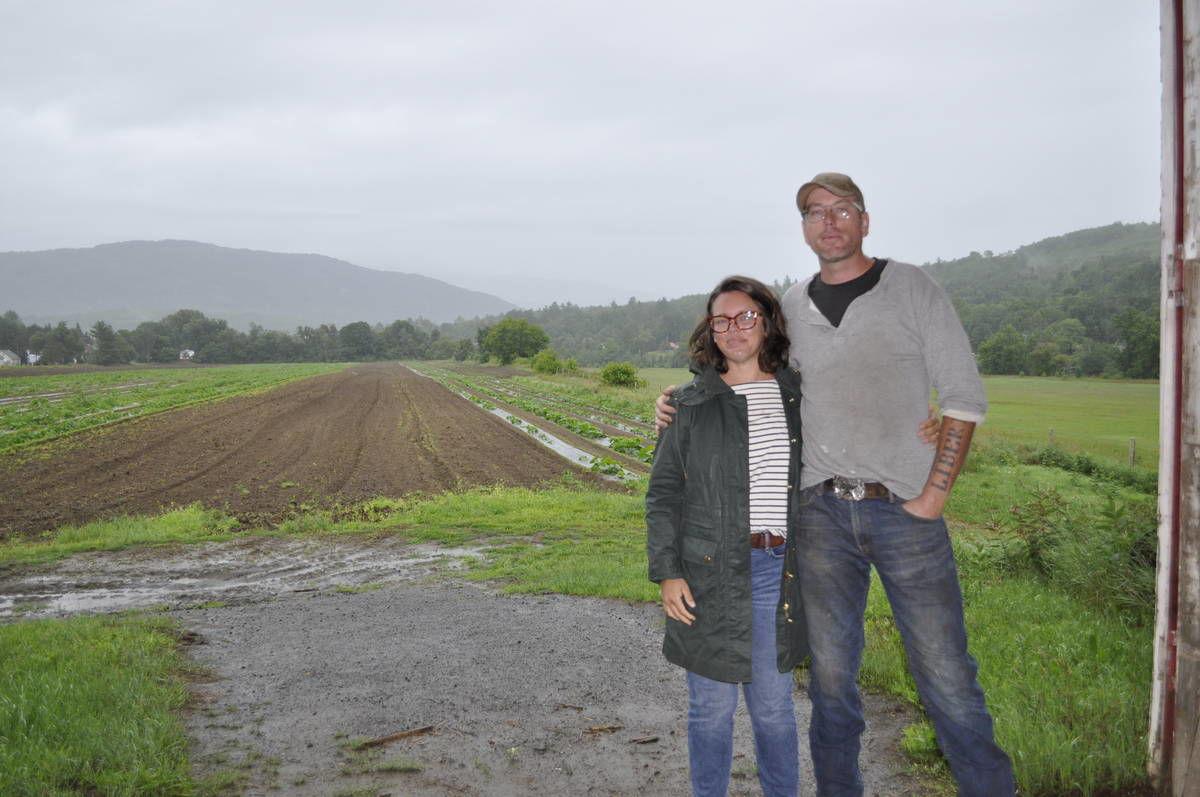 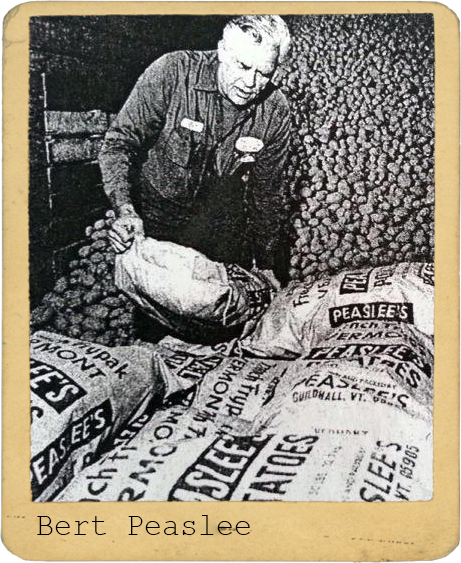 Bert Peaslee, the second-generation owner of the potato farm his parents had begun. (Courtesy Photo) 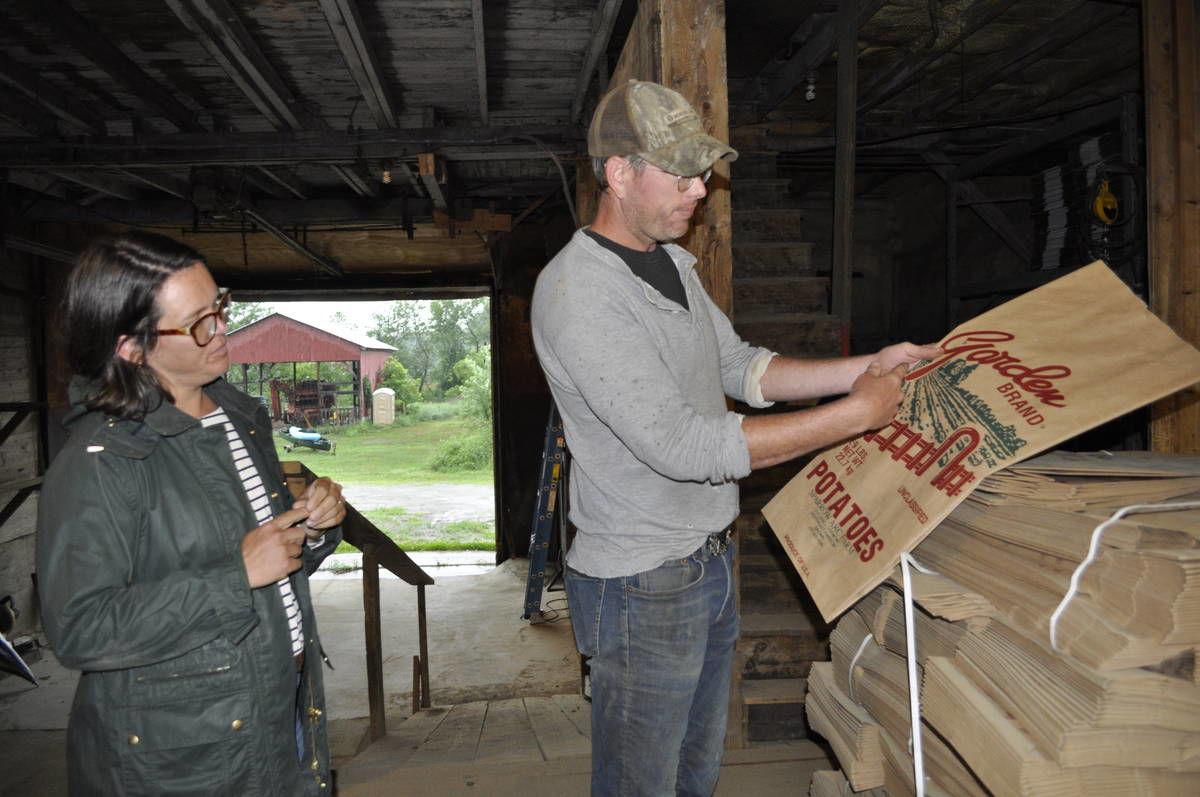 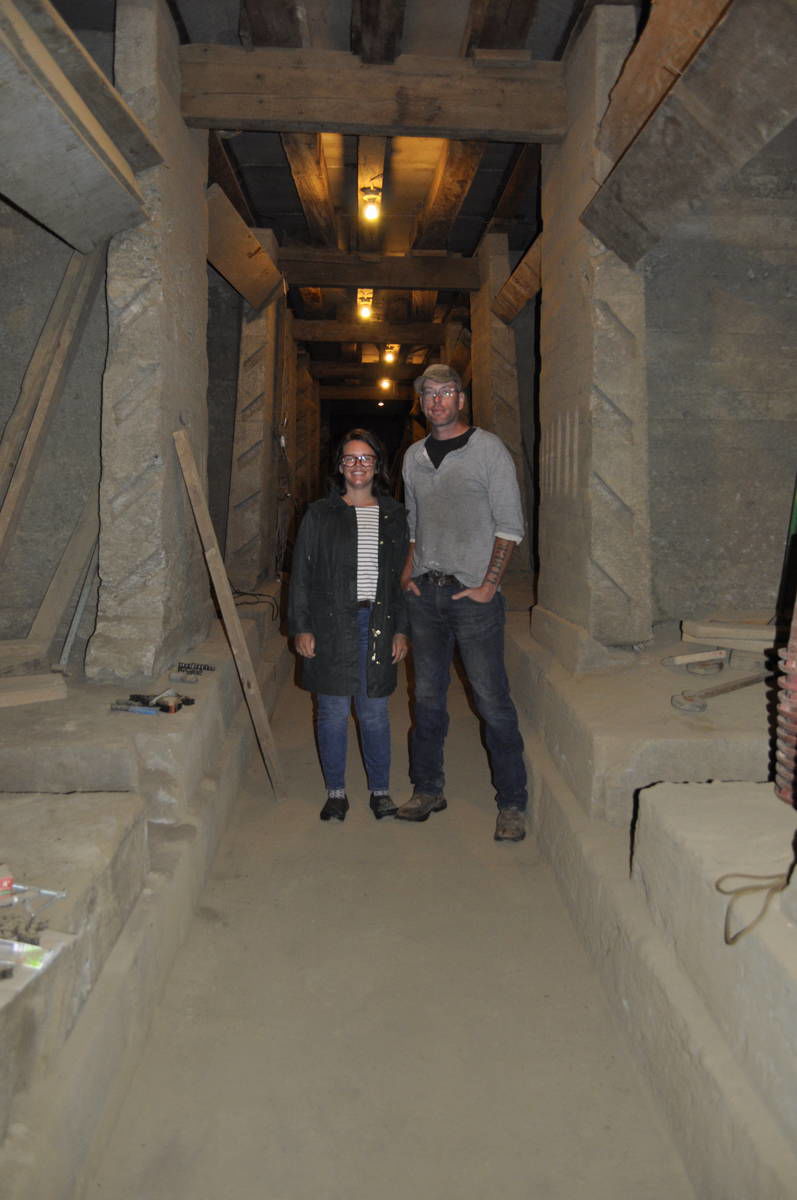 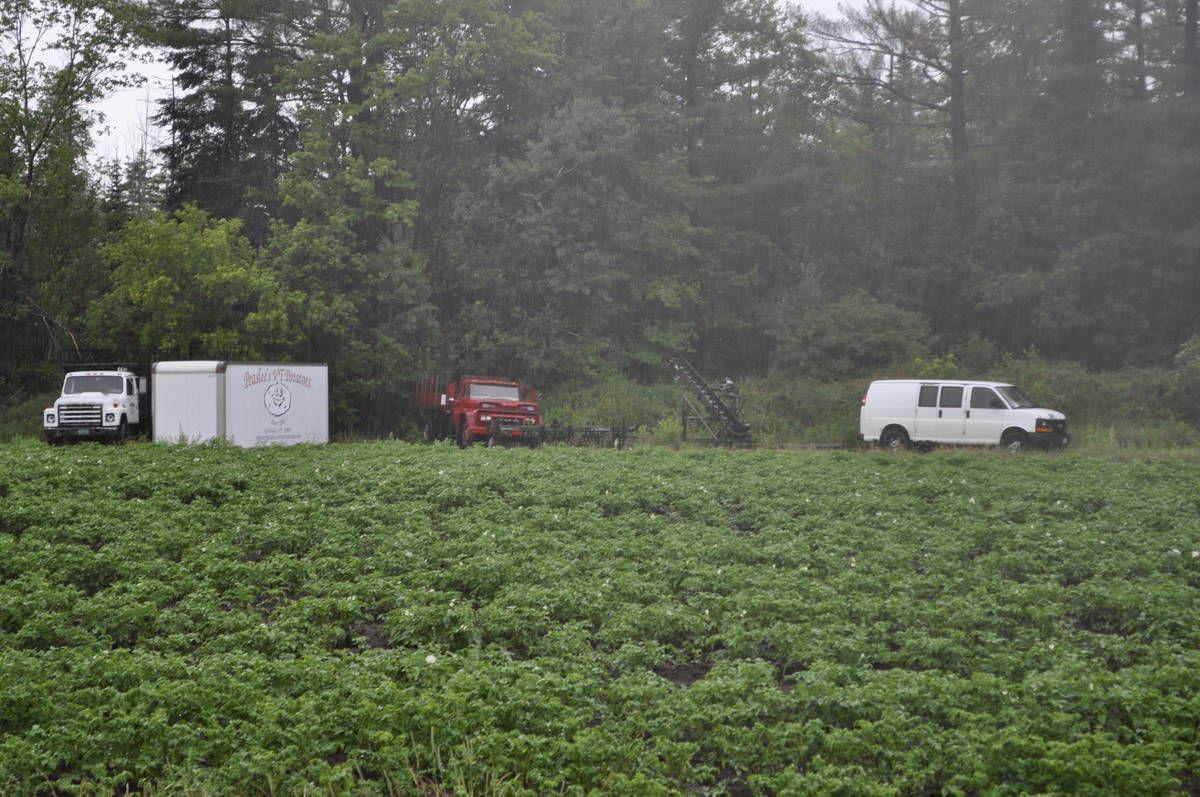 The Peaslee's name can still be seen in a field of potatoes at the Sparrow Arc Farm in Guildhall, the name the new owners have given their business. (Photo by Amy Ash Nixon) 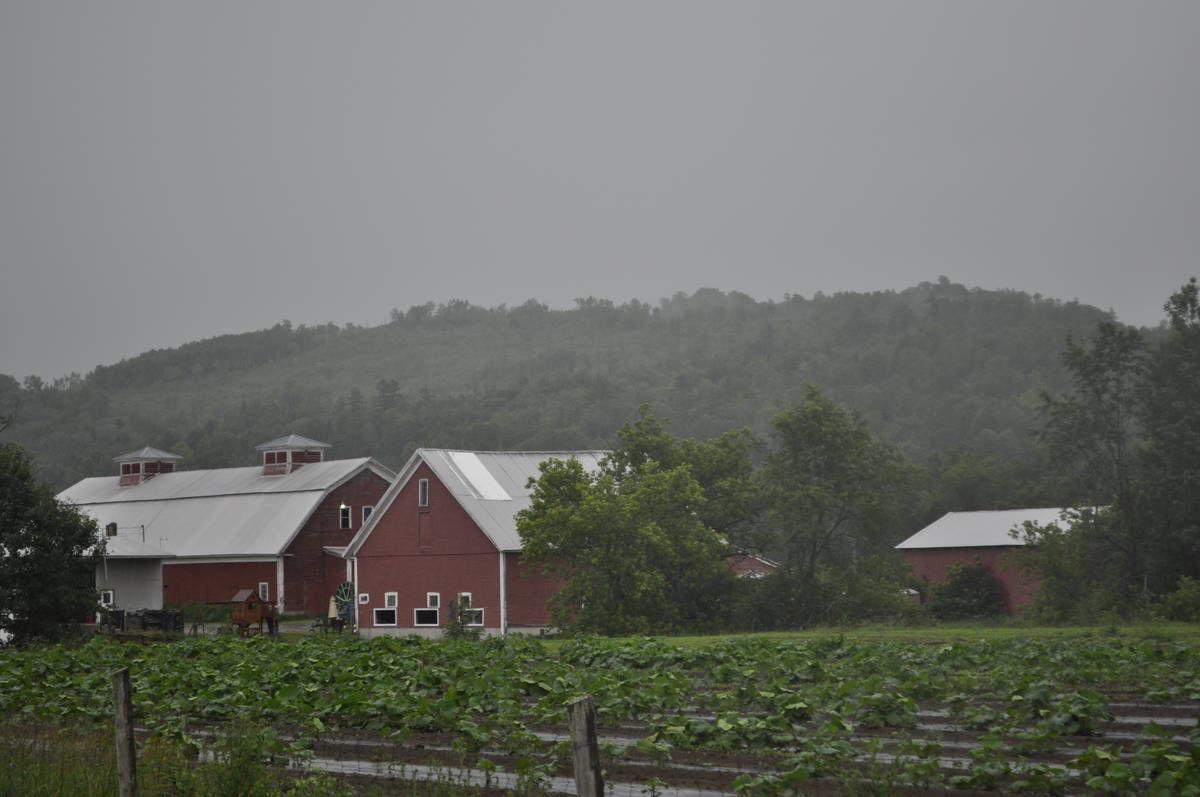 Bert Peaslee, the second-generation owner of the potato farm his parents had begun. (Courtesy Photo)

The Peaslee's name can still be seen in a field of potatoes at the Sparrow Arc Farm in Guildhall, the name the new owners have given their business. (Photo by Amy Ash Nixon)

GUILDHALL — In 2017, Peaslee’s Vermont Potatoes planted its last rows of spuds. The third-generation family business had been a 90-year tradition in the Northeast Kingdom.

The next year, at an auction of its equipment and real estate, the family hoped to find new owners.

It took another year, but in early April last year, new owners came forward. Heather and Matthew Linehan, a young couple who farmed in Maine and upstate New York, bought the farm.

They were looking for a potato barn that could handle the kind of growth they envisioned to supply the Boston markets - and to be closer to the city, three hours away.

They purchased the 60-acre farm on Route 102 on the banks of the Connecticut River, from Janice Peaslee, the family matriarch and former longtime state legislator from Essex County.

The Linehan’s potatoes are sold under their farm name, Sparrow Arc Farm.

They began last year just in time to get the plants into the 25 acres of tillable fields among the 60 acres they purchased.

They also rent many more acres from the Peaslees, and rotate croplands with the Fay Farm in Maidstone, a relationship that is very important to both farms, stressed Matt.

They harvested and sold some 700,000 pounds in their first season last year. “Not a bad start,” observed Heather.

The family farm also grows and sells seven acres of squash and pumpkins each fall, including a few acres of jack-o-lantern pumpkins.

Matt said that field turns orange come fall, and at their stand in Guildhall, they price potatoes and squash and pumpkins at “break-even prices” to be a good neighbor.

The couple, in their 30s, and with four young children ages 12 to 3 - Maceo, Louisa, Cedric and Marta - said in an interview at the farm on Tuesday morning that the reception they have received from townspeople and beyond, has been wonderful.

To see the Peaslee’s potato farm come back to life and return to productive farmland is something many people are happy about, the young farmers said.

Matt started the farm in Unity, Maine 14 years ago, where he moved for an apprenticeship in his early 20s, and was joined by his wife, who grew up in St. Croix in the Virgin Islands.

The couple sold the farm in Maine six years ago and leased two large farms in Columbia County, New York, after they had moved from growing a variety of vegetables to deciding to focus on potatoes.

Their family was growing and they needed to earn a better living so were looking to grow the business.

“The potatoes are what we wanted to do, and what were paying the bills,” said Matt. There are many farms in the St. John River Valley in Maine for sale, and they are beautiful, the couple said, but being closer to the Boston market drove them to keep looking.

Heather said all of their markets are in Boston.

They needed more land, and were looking to buy a farm with a potato barn and they found it at Peaslee’s.

“We came up here and looked at this place, we knew we were going to see the farm, but we weren’t prepared to see the soil,” Matt said.

On the banks of the river, the soil is free of rocks, which was something the potato farms had never seen. “That’s unheard of for us,” said Heather.

“It’s an awfully nice town,” said Matt of their adopted town, just 230 people, and the seat of Essex County. “We love it.”

The town also has school choice for all grades, and they send their kids to the independent Riverside School.

They are well aware that Vermont carries a special marketing magic for food, and of the love Vermonters have, too, for local food - especially from the Northeast Kingdom, Matt said. New potato bags with local art are coming out soon, and will be on the bags that go out the door next month. The artwork features a view of the fields with the mountain view.

The couple plan to sell 5-pound bags for the first time, and they will be available in co-ops this season, they said.

A number of nonprofits have supported Sparrow Arc Farm, including the Vermont Food Bank, which got a large philanthropic grant to assist those in need during the pandemic providing the food bought was local, said Matt. In spring, there is not a lot of local food ready to go - but the Linehans had potatoes aplenty.

They’ve also seen support from The Center for an Agricultural Economy in Hardwick and from the Green Mountain Farm to School organization.

The farm sells much of their crops to restaurants, hotels, and other farms, too, said Matt. They are not an organic farm, but use far less chemicals than some growers and are careful to avoid herbicides, GMOs, and a class of insecticide that is illegal in Canada, as well as other additives. They practice integrated pest management, said Matt.

Their potatoes include red, gold, white, bakers, russets for French fries and “chipping” potatoes for … you guessed it, potato chips.

“This is the most southerly potato barn in New England,” said Matt, “We needed a real potato barn, a purpose-built barn.”

In Vermont, there is just one other potato farm, in Williamstown, the couple said.

Having a huge potato barn with massive wood and concrete-supported storage “bins” the size of a cabin in their own right, allows storage that’s critical to grow the potato business, the couple said. Their barn, which needs some TLC they are hard at work to put into it, has capacity for up to 1.5 million pounds of potatoes.

That kind of storage plus the closer proximity to Boston than either upstate New York or Maine offered, allows the business to supply wholesale and processor markets, plus restaurants and other farms, their main markets.

Last year, the family was excited about settling in - it took 40 trips to relocate the farm from New York.

With a year+ under their belts, “We are super pumped!” said Matt, standing next to his wife inside the potato barn, a fierce rain pelting the fields outside on Tuesday morning.

The underground of the 80 x 140’ barn, where the 18 cavernous potato bins are now empty will soon begin filling up in August.

Boston mayor: Colleges must guard against spread of virus