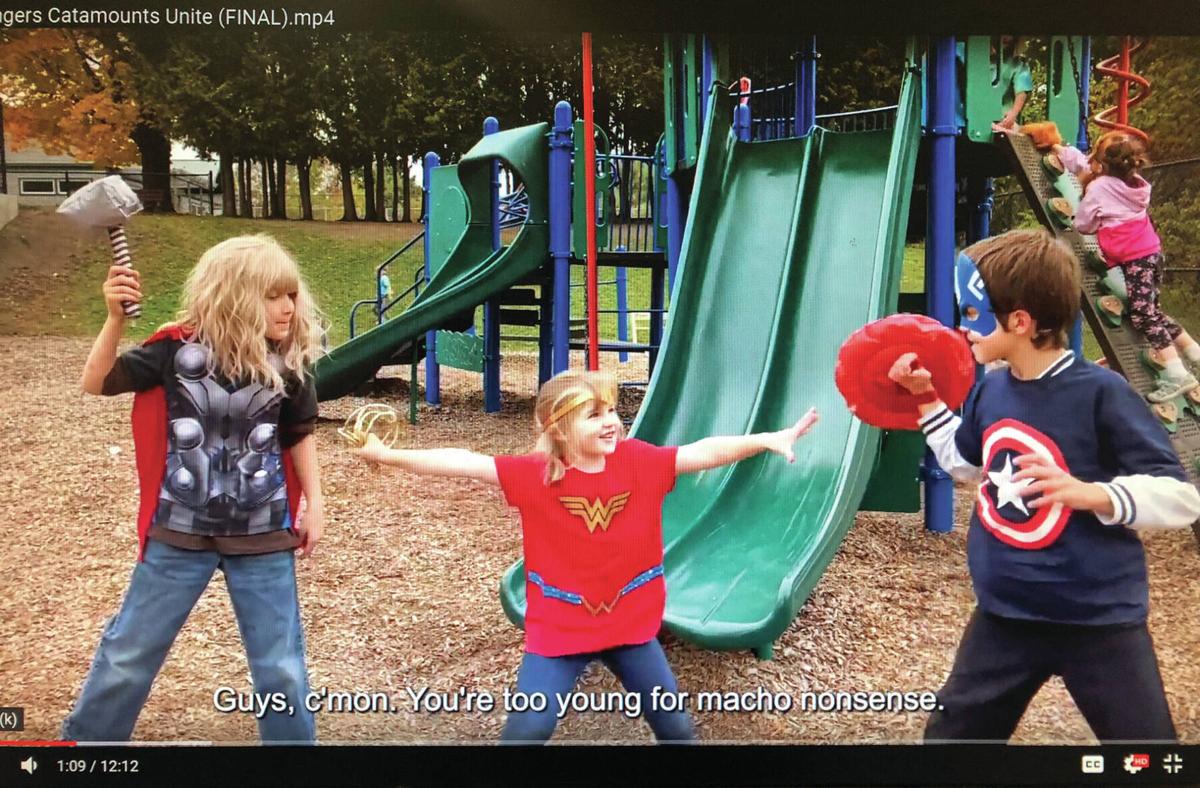 In a scene from the St. Johnsbury School film "Avengers: Catamounts Unite," Wonder Woman, played by Zoe Cota steps between Thor (Kamden Mitchell) and Captain America (Elijah Scherer) who were about to fight. (Contributed Image) 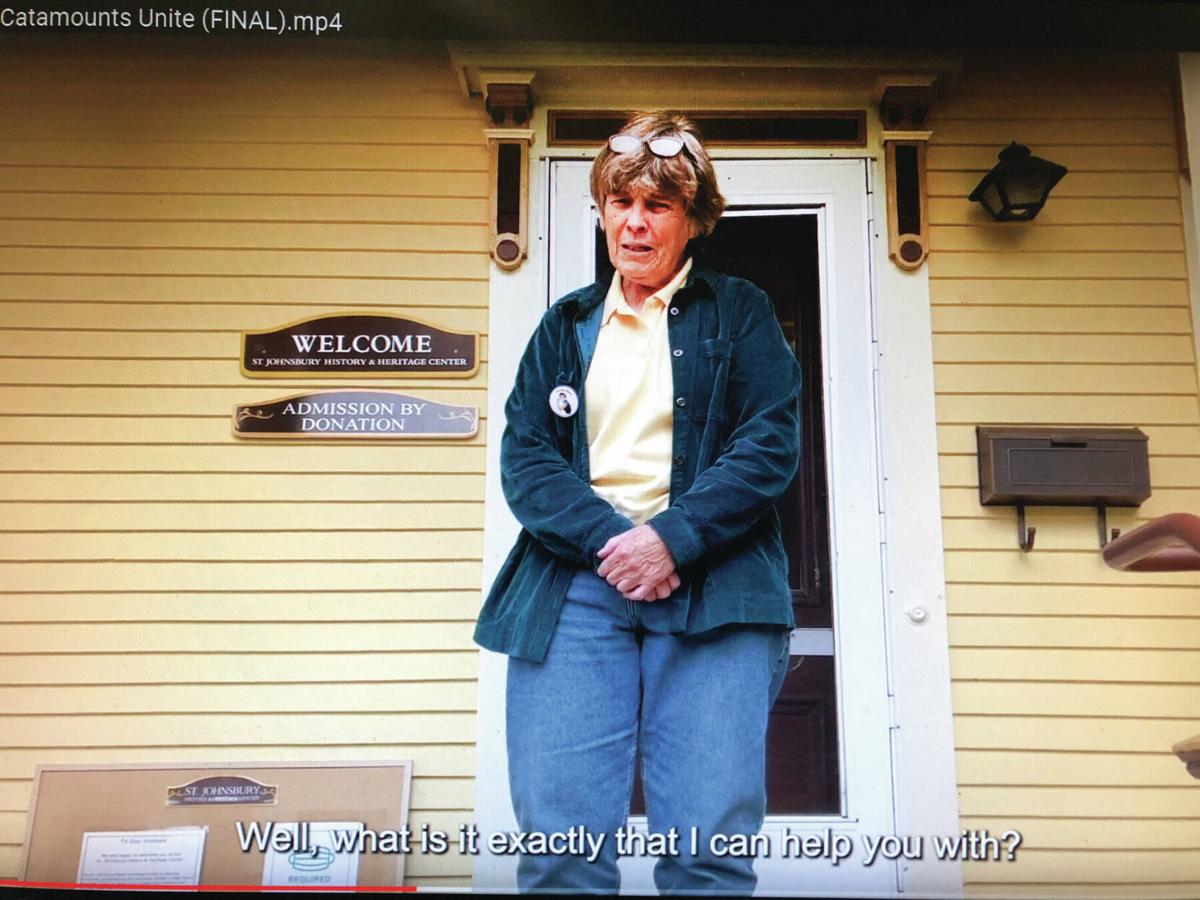 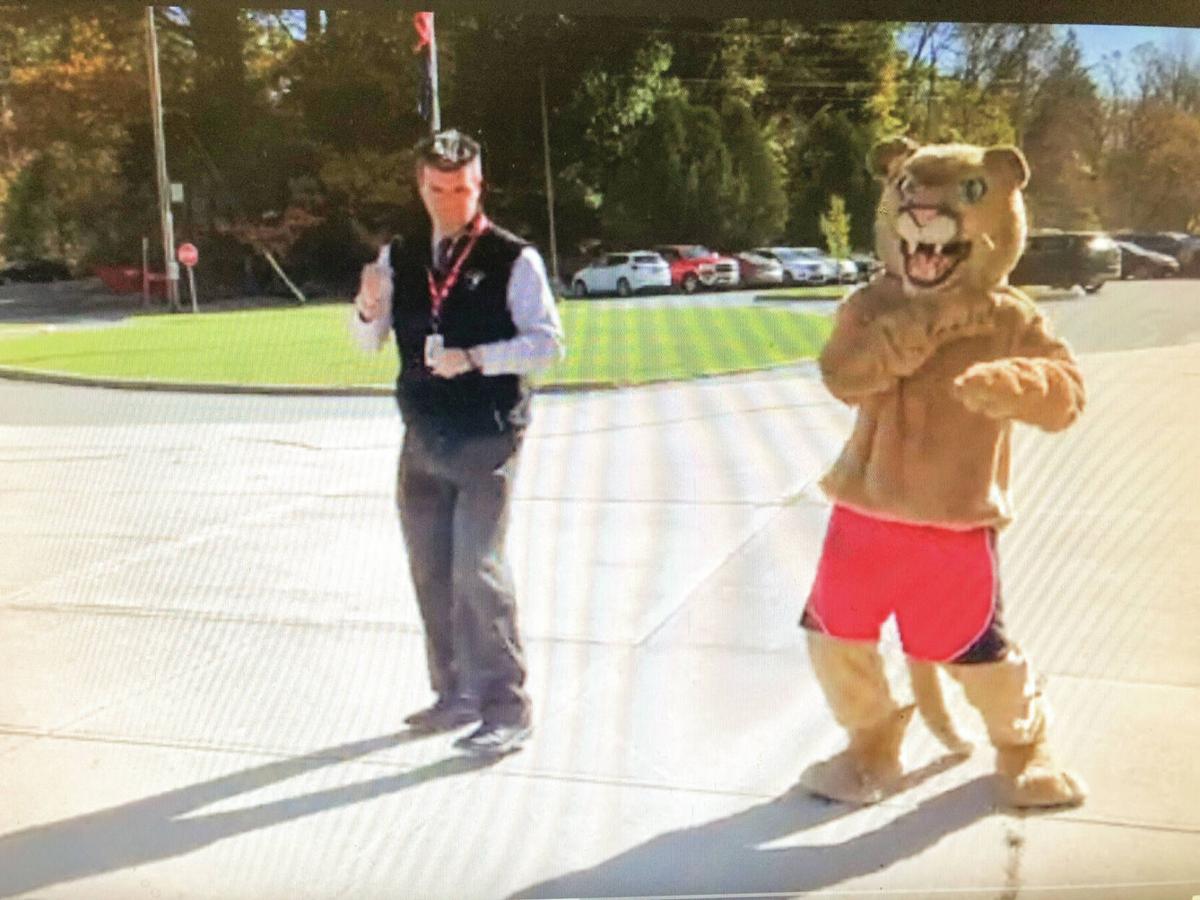 St. Johnsbury School Supt. Brian Ricca dances with the school's mascot during a scene in the student film "Harry Potter and the Order of the Catamount." (Contributed image) 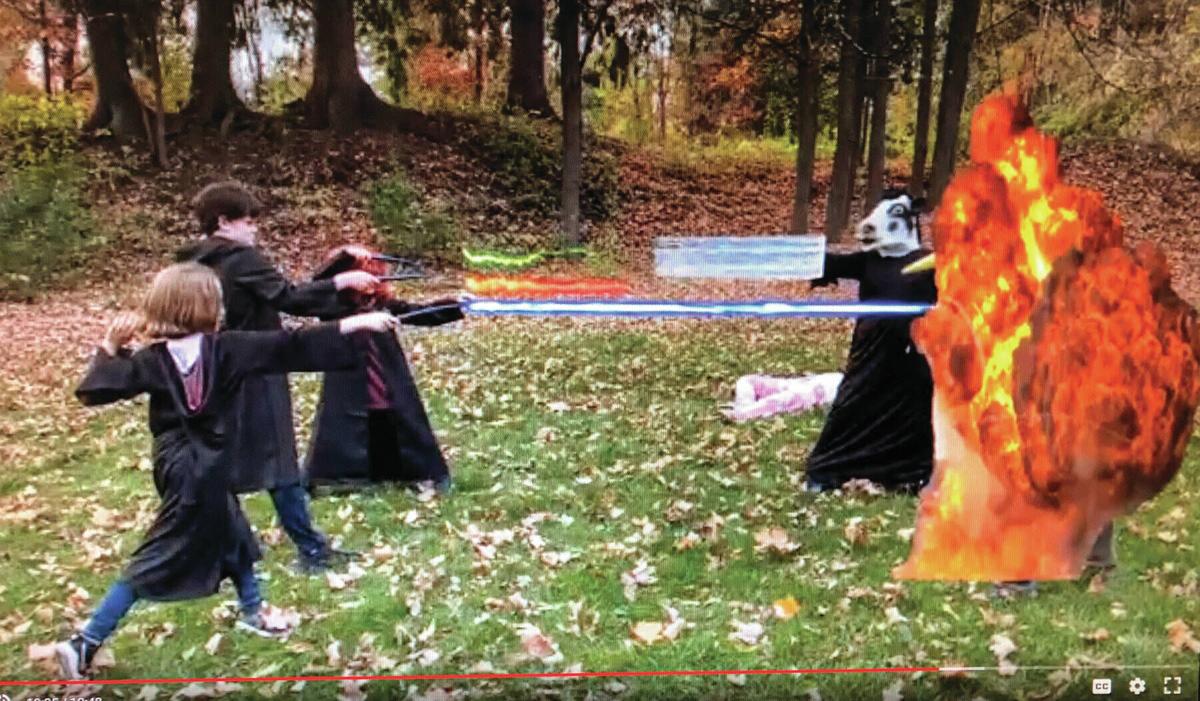 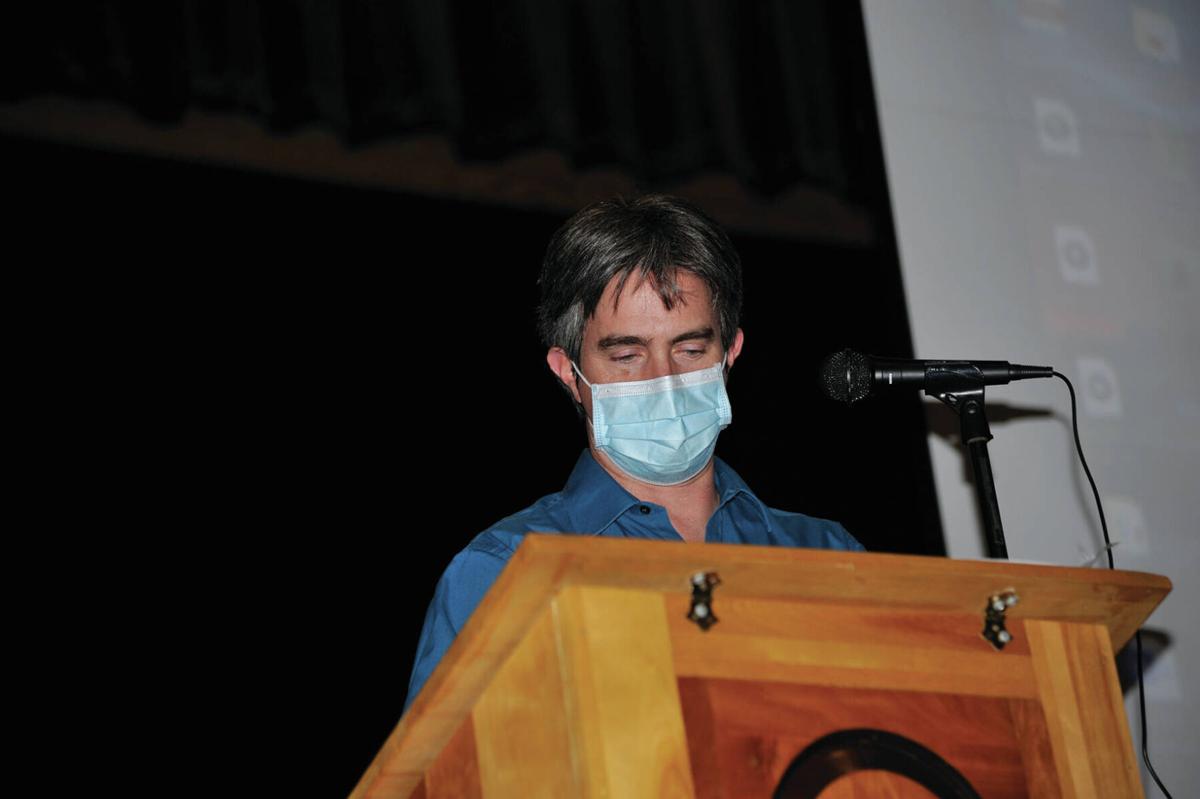 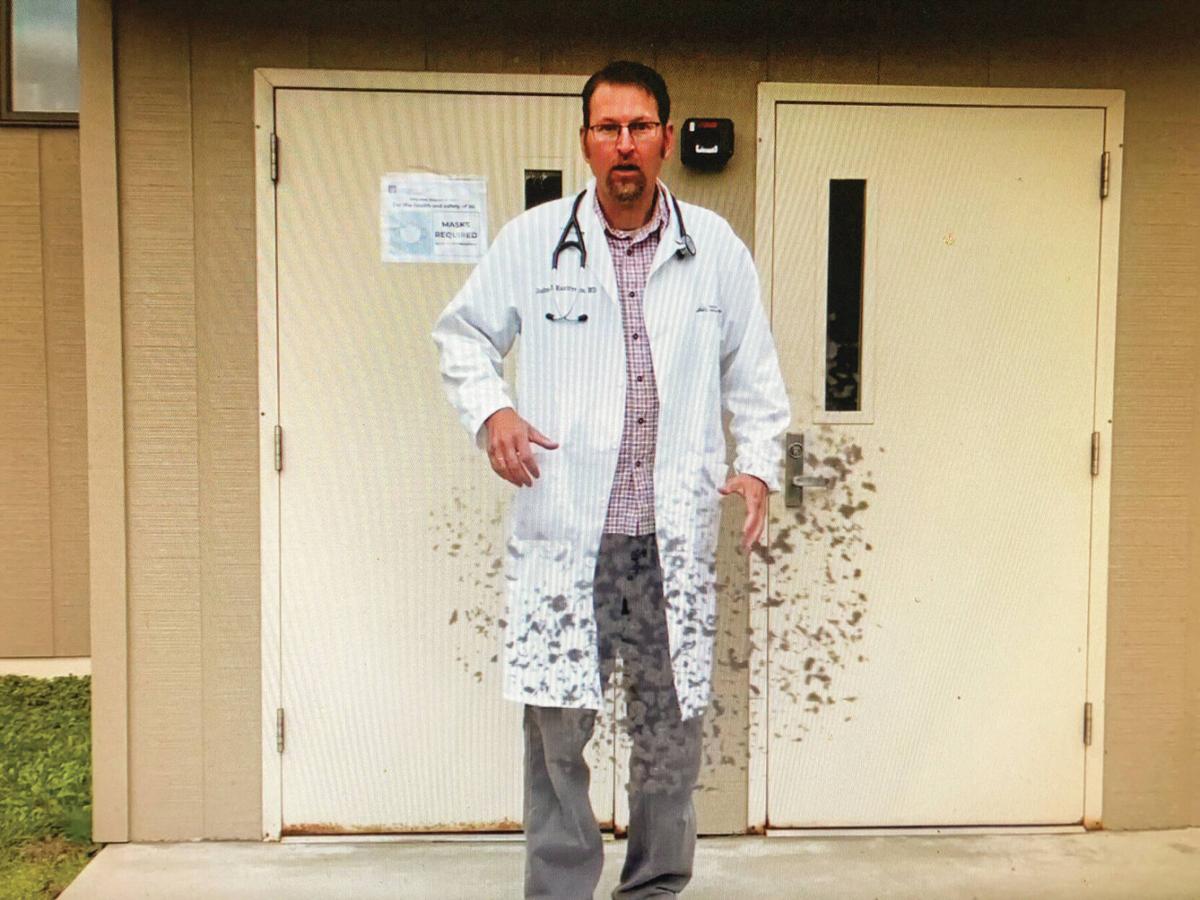 Dr. Josh Kantrowitz is being turned to ash in a scene from the St. Johnsbury School's student film "Avengers: Catamounts Unite." (Contributed Image)

In a scene from the St. Johnsbury School film "Avengers: Catamounts Unite," Wonder Woman, played by Zoe Cota steps between Thor (Kamden Mitchell) and Captain America (Elijah Scherer) who were about to fight. (Contributed Image)

St. Johnsbury School Supt. Brian Ricca dances with the school's mascot during a scene in the student film "Harry Potter and the Order of the Catamount." (Contributed image)

Dr. Josh Kantrowitz is being turned to ash in a scene from the St. Johnsbury School's student film "Avengers: Catamounts Unite." (Contributed Image)

ST. JOHNSBURY — Like chocolate and peanut butter complement each other to make a Reese’s Peanut Butter Cup so too can wizards and humans come together to conquer evil.

This and other lessons played out on the big screen last week in the St. Johnsbury School Auditorium as students involved in the CatCH (Catamount Community Hours) After School Program shared films they made with a select audience.

The first and second graders premiered “The Avengers: Catamounts Unite” and third, fourth and fifth graders offered “Harry Potter & the Order of the Catamount.”

The scripts and the direction came from Bryan Duff, coordinator of CatCH After School and Summer Programs at the school. He led the students through the project beginning soon after they returned to school following summer break. The film festival last Wednesday was a chance for students, their families and special guests to view the final products.

“I have done movie-making with youth since 2015, but I’ve never done it with kids this young (first and second grades),” Duff said. While introducing the films to families at the festival, he said working with the younger kids is something he’d be happy to do again.

“I definitely would do it again,” he said, taking a brief pause before saying “after a very long break.”

Unlike some of the after-school programs which he administrates from a distance, Duff said directing the student films meant he could work more closely with the students. It also gave them a chance to be more engaged with him.

“Kids are especially attuned to when their teachers are teaching from the heart and really engaged and not just going through the motions,” said Duff. “I wanted kids to see me in a different, playful, engaged light.”

He told the festival audience that the films were more than just about the finished products. “When you make a movie you are practicing important skills,” he said, including memorization, patience, teamwork and flexibility.

“We had things we could not control that happened at the last minute, like bad weather, like students having to quarantine, like learning that YouTube doesn’t do a good job with captioning children’s voices and the way they pronounce things,” Duff said.

He said every obstacle became an opportunity to seek a way forward around it.

Duff created the storylines for the films based on familiar Marvel and Harry Potter movies. He said from the beginning he wanted the students to understand they were making a movie that could be understood and appreciated by people outside the production.

He said he asked the kids “how do we make a movie that isn’t just an inside joke?”

Getting the students to focus on creating something accessible to an audience outside their core group was a good lesson, said Duff.

“It’s an exercise in empathy; you really learn more if you try to make it more accessible,” he said.

Each film, which lasted about 13 minutes with story, credits and bloopers, was performed by six students.

The young Thanos had been sent to Earth, as part of his “apprenticeship in evil” to deal with St. Johnsbury.

“I’ve been hearing things about St. Johnsbury on planet Earth,” Thanos says to his son. “It is getting strong. Time to bring it down a notch.”

Junior is given a scooter to take his trip to Earth and is told to deal with the “pillars” of St. Johnsbury. He dispatches Pearl and Dr. Kantrowitz quickly with two snaps of his fingers, but then Avengers with some help from Wonder Woman and the Wonder Twins (actual twins Lena and Ella Casey) intervene.

Recognizing the young Thanos was after the pillars of the community, they seek out another pillar to serve as bait. Grooving and moving to Staying Alive by the Bee Gees, Principal Jeremy Ross exits the school, and the superheroes know they’ve found their bait.

They lure little Thanos into their trap but he proves a bigger challenge even after getting hit in the head with Thor’s hammer. It ultimately takes a team of Catamounts to bring him down - University of Vermont Catamounts to be exact. Duff went to Burlington and got the women’s field hockey team and players from the men’s soccer team to march menacingly toward the camera as if ready to attack the young Thanos.

The audience is led to believe that an off-camera beat-down has taken place. As movie magic shows the intergalactic enemy spiraling through the air, a restored Pearl had some parting words for him: “Don’t mess with St. Johnsbury, you space prune.”

With the Harry Potter film, the older students created a story that showed people need to work past their differences to overcome a challenge.

It’s a story of wizards, whose Hogwarts school building is St. Johnsbury Athenaeum, and St. Johnsbury School students drawn together for the Goodwill Games. The opening scene shows student Callum McGregor questioning why they need to engage with the wizards. “Why mix wizards and humans?” he asks.

Without a word, student Yoyo Wu, pulls out a sleeve of Reese’s Peanut Butter Cups and shares them with McGregor and student Emma Lovett.

The humans and the wizards come together for the games and are welcomed by Supt. Brian Ricca, who does a choreographed dance with the Catamounts mascot.

Duff said he was happy to have Ricca and Ross involved in the movies, calling them both “one-take wonders.”

Getting authority figures to engage in activities with the students is something Duff said is important.

“I love to see any opportunity to bring adult authority figures down to earth,” he said.

After discovering that the humans and wizards had different ideas of how to play the games - during the spelling bee, human Wu spelled “banana” while wizard Hermoine (Avery Duff) used a spell to turn a student into a banana, and during broomball, the humans used brooms to move the ball, while the wizards rode their brooms - the two sides began to clash until a shared enemy showed up.

It was Voldemoo, formerly Voldemort but transformed by Harry into a cow with a magic wand. Putting aside their differences and working together, the two sides combined to defeat Voldemoo.

After the films were shown, several performers said they were excited to see themselves on screen. They said they had fun making the movies and the biggest challenge was in learning their lines; the blooper reel confirmed that sentiment.

Lovett’s mom Kate said the experience was good for her daughter, helping to boost her confidence.