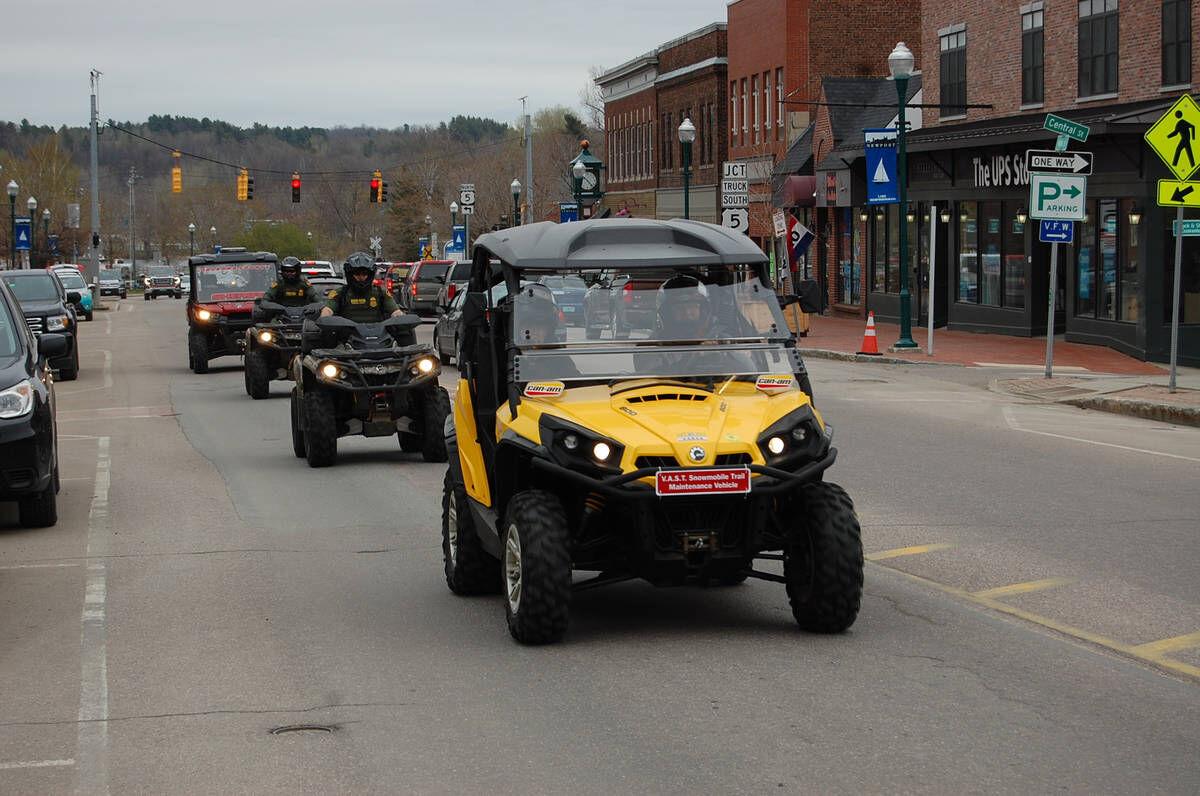 ATVs ride on city streets on May 15, 2020. This summer, city riders will be able to ride on their own streets to reach trail heads. (File Photo) 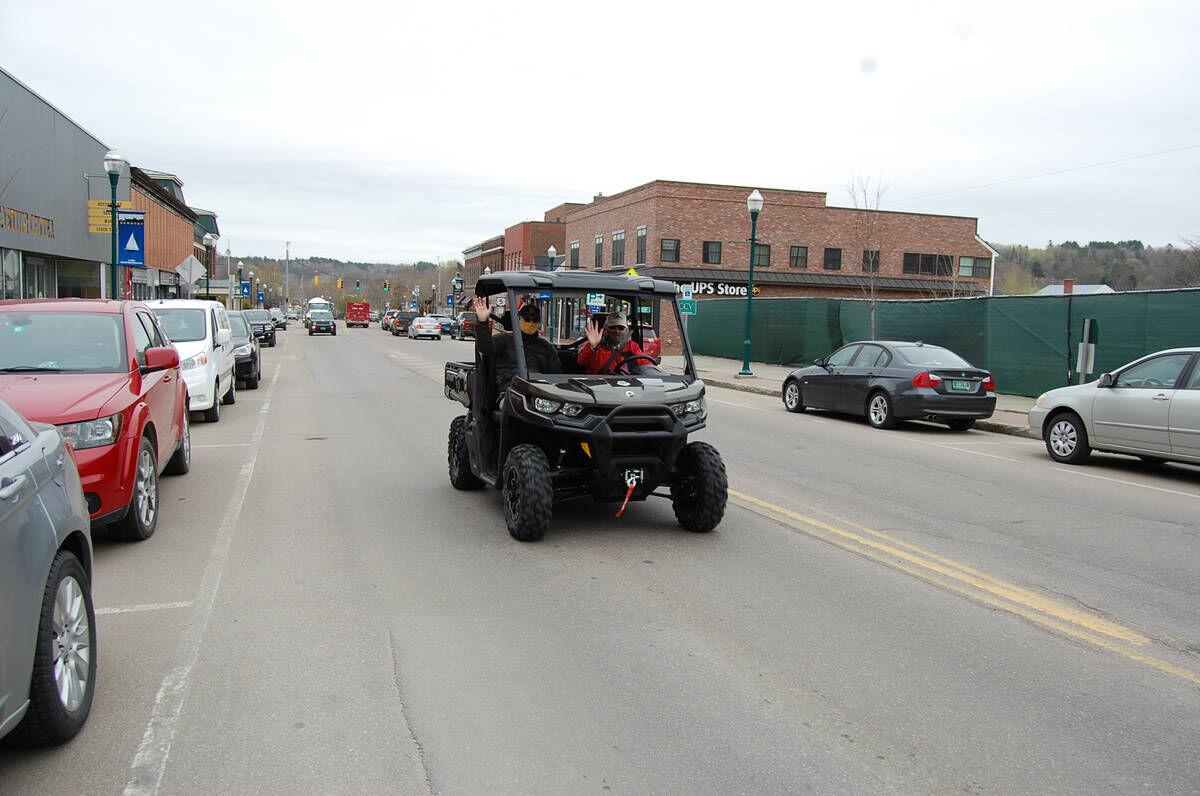 Newport City Mayor Paul Monette waves from an ATV on May 15, 2020, during a Main Street procession marking the first day of ATV access to city streets. (File Photo) 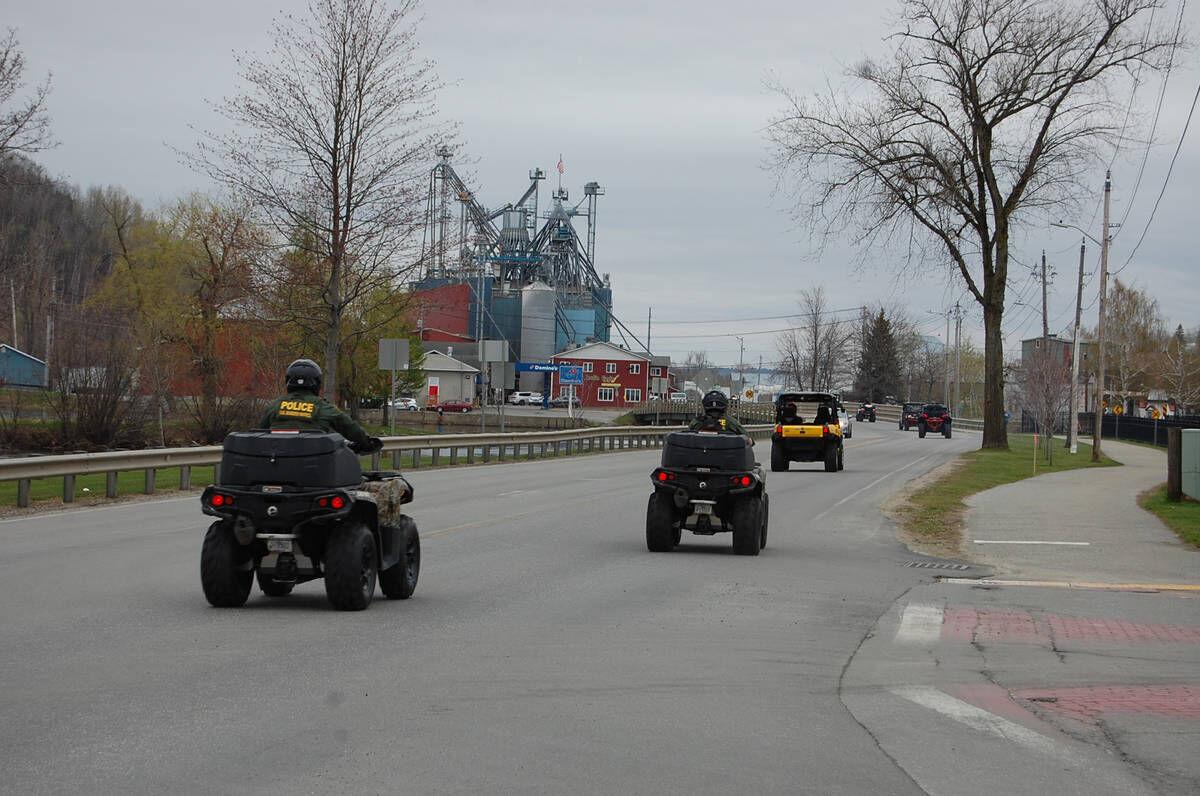 ATVs ride on Newport City streets for the first time on May 15, 2020. In the background, the iconic Poulin Grain towers. (File Photo)

ATVs ride on city streets on May 15, 2020. This summer, city riders will be able to ride on their own streets to reach trail heads. (File Photo)

Newport City Mayor Paul Monette waves from an ATV on May 15, 2020, during a Main Street procession marking the first day of ATV access to city streets. (File Photo)

ATVs ride on Newport City streets for the first time on May 15, 2020. In the background, the iconic Poulin Grain towers. (File Photo)

NEWPORT CITY — Local owners of all-terrain vehicles will be able to ride on their own city streets by June.

The city council on Monday unanimously adopted language in an ordinance amendment that keeps Main Street and other key routes open to ATV riders for a second year.

It also will allow local owners and their guests to ride from their homes to designated streets and trailheads around Newport City.

In practice, all streets in the city will be open to ATV traffic as of June 20, when the ordinance amendment goes into effect.

Newport became the first city in Vermont last spring to open access to ATVs, part of a wave of access across Orleans County. The ATV riding season will begin May 15.

Riders on city streets must wear helmets and follow state laws, register their vehicles with Vermont and be a member of the Vermont ATV Sportsman’s Association (VASA).

The council also included a change in the hours that ATVs are allowed in the city, moving the start time from 8 a.m. to 7 a.m.

The designated streets like Main that link to the trailheads leading to the city are on the state ATV map. The rest of the city streets will be open to local access but that will not appear on the map.

Mayor Paul Monette said during the remote meeting that the change will give city residents the access they have requested.

“I can tell you the biggest complaints I had were from residents who … could not access the trails from their home,” Monette said about the local response to the first season.

He said he didn’t realize how many local residents own ATVs.

It will also address most of the complaints about ATVs received by the Newport Police Department.

Eighteen complaints came in May and June last year.

The only concern during the discussion Monday came from former Alderwoman Jennifer Hopkins, who said she had no problem with opening access to all city streets.

She questioned the amendment language that says non-designated streets can be used for trailhead access by city residents and their “invitees.”

She suggested that invitees should be accompanied by a resident on ATVs. Or she said the city should just open up all streets and be done with it.

Monette said the language is designed to prevent someone from riding around in a circle all day on non-designated streets.

Former Alderman Denis Chenette asked if the council was “basically opening up the entire city to access the trails.”

Monette confirmed that but repeated that only designated streets will be on the state ATV trails map.

The changes open up Mt. Vernon Street so ATV riders can reach the new restaurant at the golf course from Western Avenue, Glen Road or Main Street. It also opens Sias Avenue, where Newport City Elementary School is located in a residential neighborhood.

Bingham confirmed that no ATV riders were ticketed for speeding. The presence of ATVs on city streets actually slowed traffic, he said.

And there were no noise complaints.

That pleased Alderwoman Melissa Pettersson, who said she had wondered about that but found last year that she hardly noticed ATVs. Motorcycles and other vehicles were louder, she said.

Jenness thanked the council for its support.

A proposal by the local downtown development association to study the impact of ATVs is not needed, Monette said.

Aside from the lack of complaints, business owners were very supportive.

“Business owners I spoke to said it helped them quite a bit” during the height of the COVID-19 shut down in Vermont last spring, Monette said.

The council will hold another hearing on the ordinance amendment before it goes into effect.

Careers that require the most schooling

Most common jobs in America

20 products you might not know are from the Amazon rainforest

The most famous actress born the same year as you

How the coronavirus has affected alcohol use in adults

Kobe Bryant: The life story you may not know

Metros where rents have spiked the most during COVID-19

States that have vaccinated the most residents

US Marines history from the year you were born

How America has changed since the first census in 1790

States that will need nurses the most by 2030

From 'Metropolis' to 'Parasite': 100 best international movies of all time

Most rural counties in every state

Charlie Chaplin: The life story you may not know

The gender investing gap by the numbers

100 best films of all time, according to critics

Notable events in the history of Earth Day

Most valuable agricultural products from every state