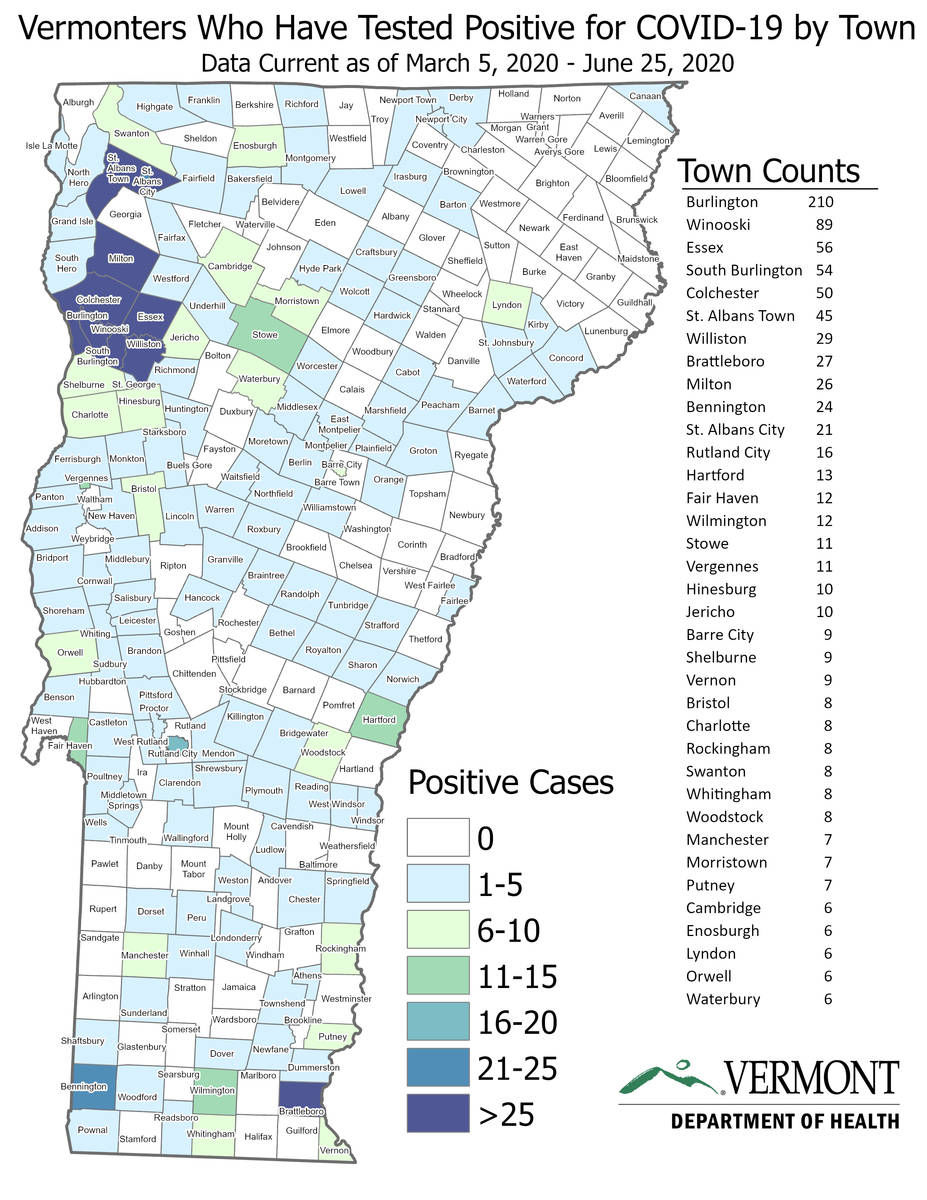 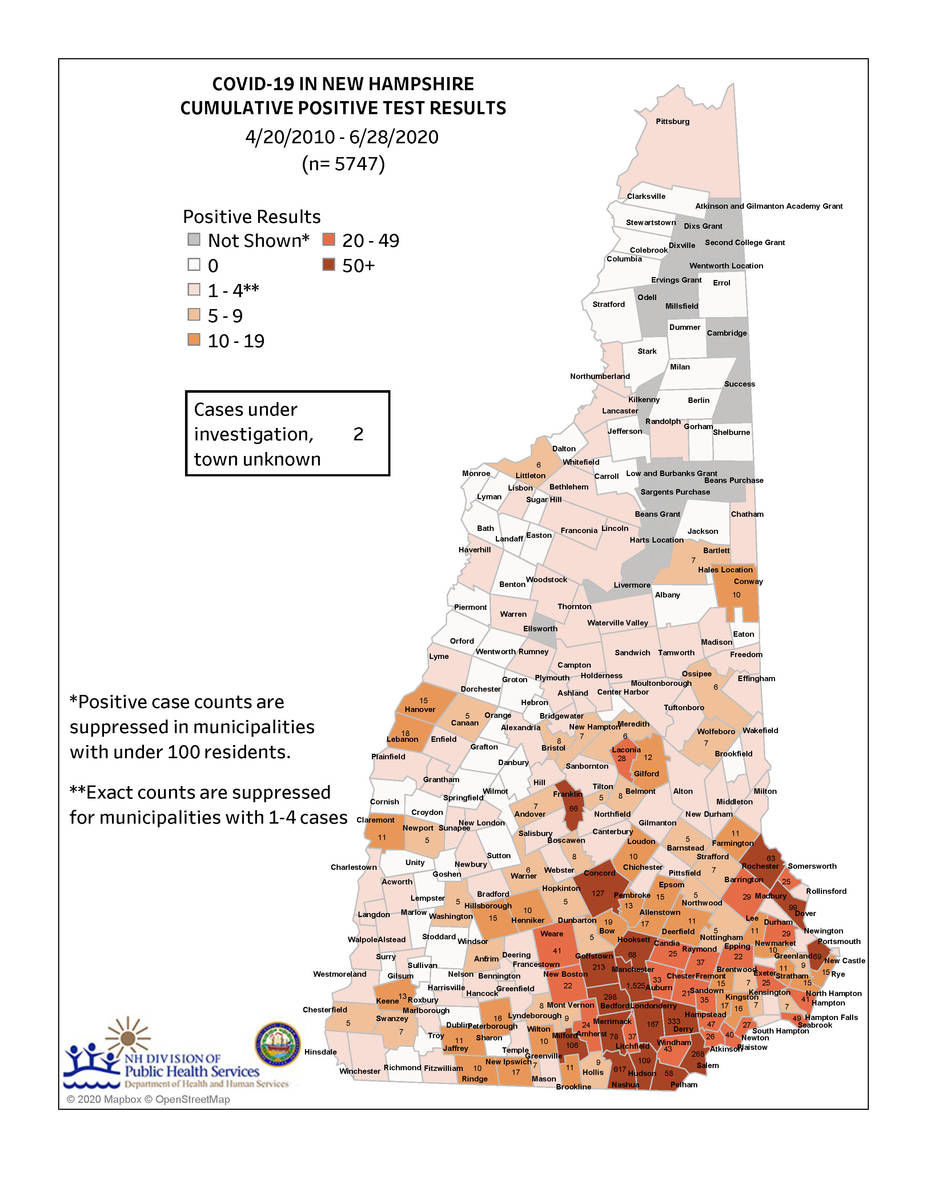 The Northeast Kingdom has seen another coronavirus case in recent days, bringing the total Kingdom wide cases to 36 and revealing Lyndon as the town in the area with the most positive cases since the pandemic began.

According to the Vermont Department of Health, there have now been 19 cases in Caledonia County, 14 cases in Orleans County and still just 3 cases in Essex County.

The latest Caledonia County case was reported late last week. As a result of that case Lyndon is shown to have had 6 cases since March, according the the Health Department’s case count by town.

Since the pandemic began Northeastern Vermont Regional Hospital has administered 2,167 tests and had 15 positive tests. There are no COVID-19 patients hospitalized at NVRH currently.

The Health Department reports a town by town case count once a week and only reveals the exact number of cases within a town once that town has reached 6 or more cases.

As of the June 25 report, about one third of NEK towns had reported COVID-19 cases with only Lyndon having 6 cases. The rest have between 1 and 5 cases.

“We haven’t really seen an uptick here in Vermont. Our positivity rate (percentage of positive test results to total tests administered) is among the lowest if not the lowest in the country,” said Gov. Phil Scott during his Monday press conference. “We feel good about where we’re at, so I’m not contemplating tightening the spigot at this point in time.”

Scott reiterated the health advice that state officials have been delivering for weeks now, physically separate from others as much as possible, wear a mask, wash hands often and stay home if sick.

Dr. Mark Levine, Commissioner of the Vermont Department of Health, indicated that Vermont’s data continues to show the spread of the virus is low in the state and discussed the surge of cases being experienced in other parts of the country. Levine cited there has been about a 65 percent upsurge over the last 2 weeks nationwide, including several days with over 40,000 new cases reported in a single day.

Levine noted that on a recent day when Vermont reported 6 new cases, Florida had 10,000 and the Governor of Texas asked people to stay home and closed bars. In addition hospital and ICU capacity is now being stretched in Mississippi, Houston and Arizona.

“I’m saying all this not to make comparisons with Vermont and certainly not to say one is better and one is worse, but really to try to look at some of the lessons we can learn and t0 point out why we take such pains in reinforcing the four core messages that the governor just repeated.”

“The virus is still here, and it really prays upon the ability of human beings to spread it through the air that we all breath and share,” warned Levine.

Within the region, Lyndon has the same number of cases as Littleton, N.H., which has also had 6 people diagnosed with the coronavirus and is the town with the greatest number of cases in the North Country.

Other North Country towns that have had residents test positive include Pittsburg, Northumberland, Lancaster, Randolph, and Whitefield in Coos County; and Bethlehem, Franconia, Lisbon, and Haverhill in northern Grafton County.

As part of its daily reporting, the New Hampshire Health Department provides two counts of viral activity in the state - total cases since the beginning of the pandemic and currently active cases.

As of Monday, the only an active case in the North Country was in Pittsburg, all other cases are considered recovered at this point.

The Vermont Health Department reports that of the 1,208 total cases in Vermont 949 have since recovered.

The state’s method for determining people who have recovered is either the individual self-reporting that they have recovered during follow up by Health Departmet staff or 30 days having passed from date of diagnosis.

According to the Health Department, the majority of NEK cases would be considered recovered at this point, having occured more than 30 days ago.