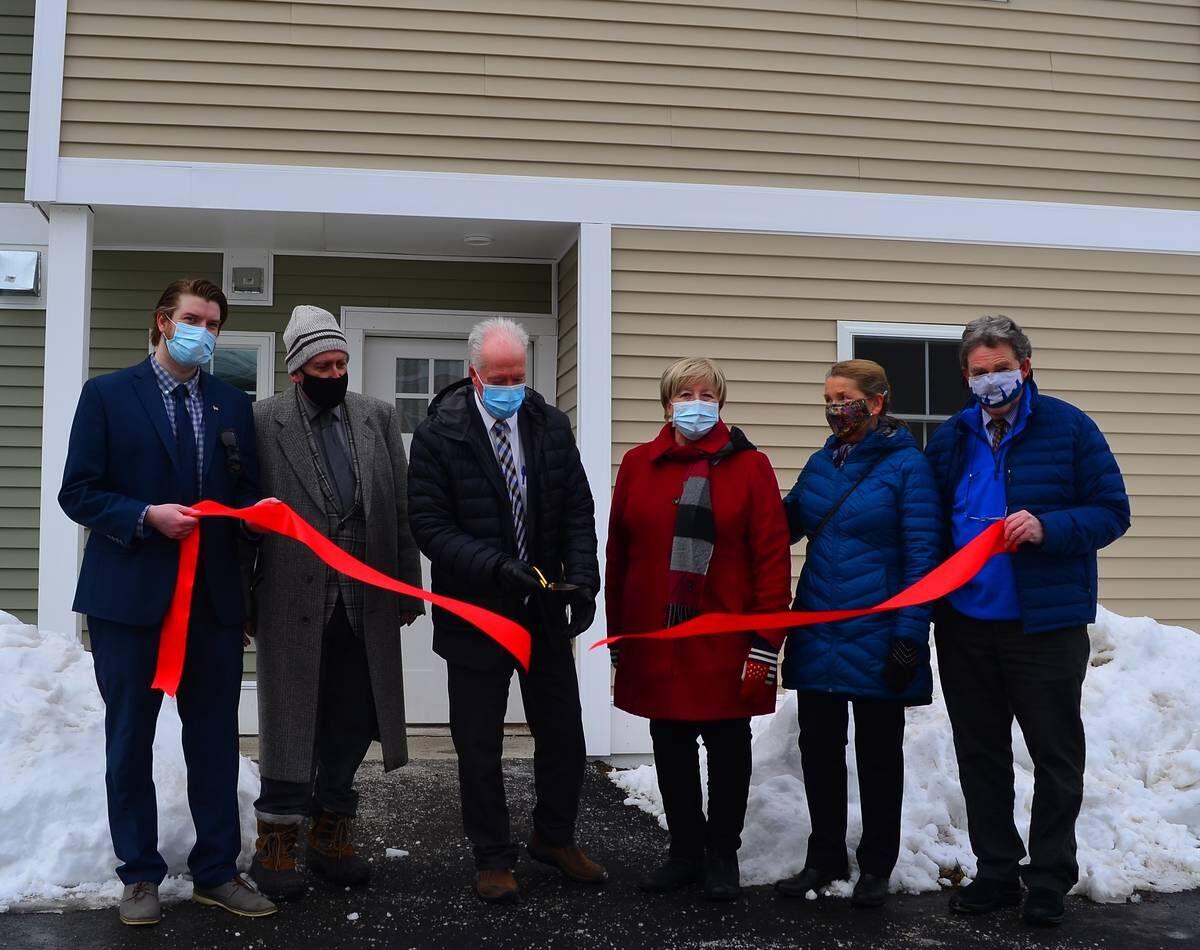 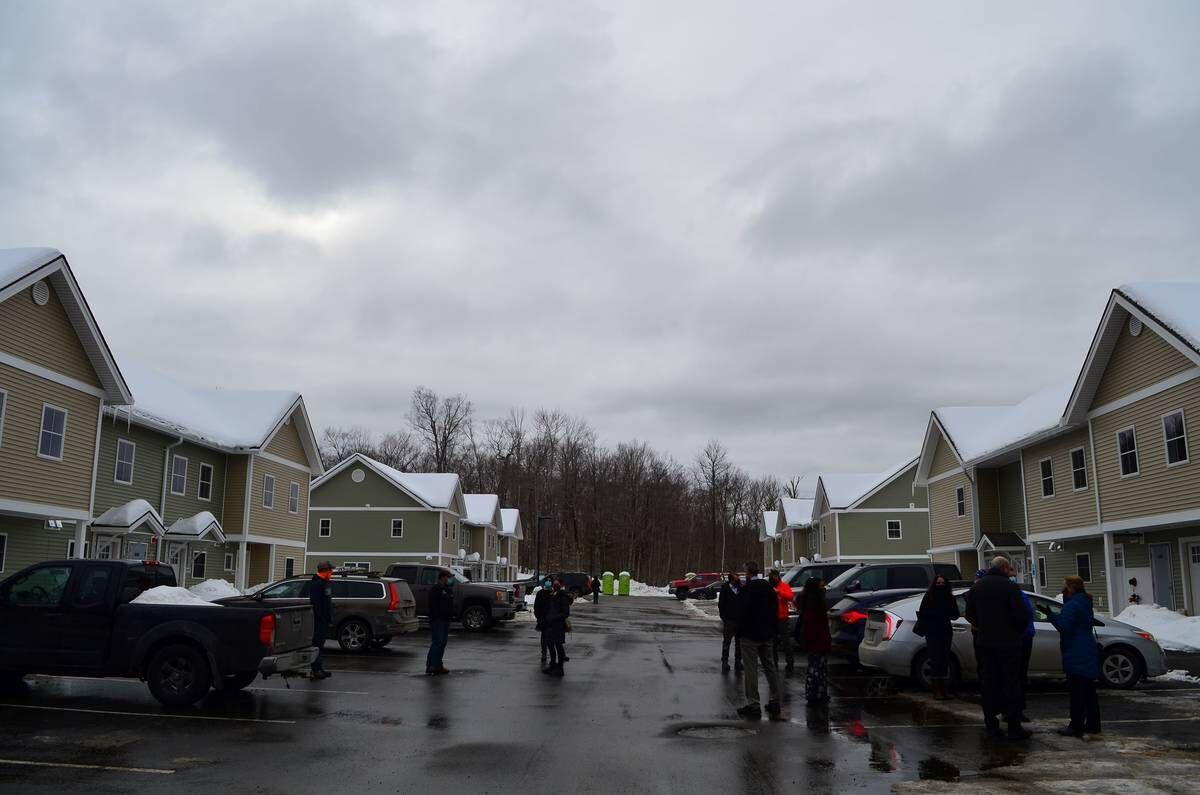 On Monday, the first families can begin moving into Community Living at Lloyd's Hills, a 28-unit apartment complex in Bethlehem by AHEAD that was celebrated with a ribbon cutting on Friday. (Photo by Robert Blechl) 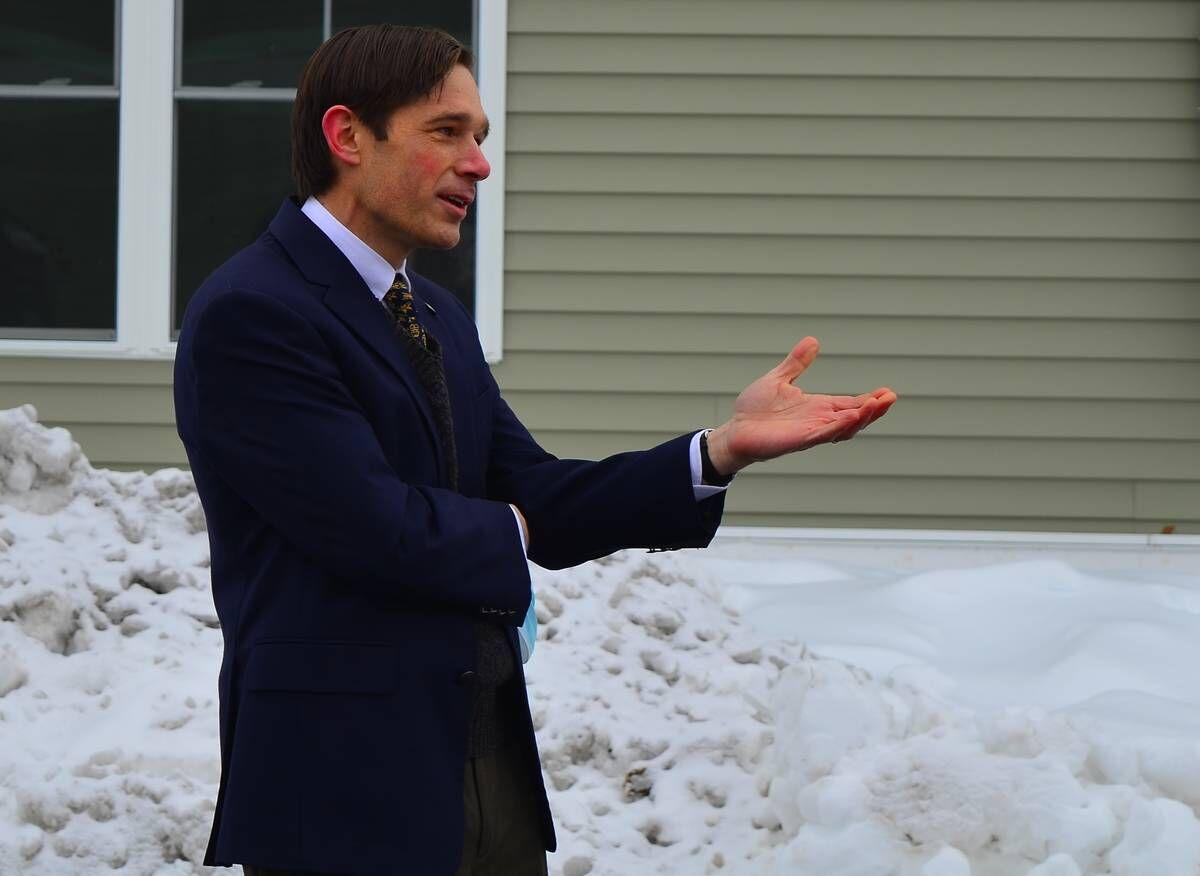 Rob Dapice, managing director for the New Hampshire Housing Finance Authority, spoke during a celebration and ribbon cutting on Friday for for the new Community Living at Lloyd's Hills, a $10 million 28-unit apartment complex that is now complete. (Photo by Robert Blechl)

On Monday, the first families can begin moving into Community Living at Lloyd's Hills, a 28-unit apartment complex in Bethlehem by AHEAD that was celebrated with a ribbon cutting on Friday. (Photo by Robert Blechl)

Rob Dapice, managing director for the New Hampshire Housing Finance Authority, spoke during a celebration and ribbon cutting on Friday for for the new Community Living at Lloyd's Hills, a $10 million 28-unit apartment complex that is now complete. (Photo by Robert Blechl)

BETHLEHEM — It was a lesson in perseverance.

There were permit and approval delays, financing revisions, rising construction costs, and a host of other challenges, years of them.

But persistence paid off, and the North Country now has 28 new units of affordable housing, making one big step toward addressing the region’s current shortage of housing options.

Also celebrating were representatives of the funding organizations, AHEAD staff members, the construction crew, and local lawmakers.

The $10 million project, a half-decade in the making and featuring 14 two-bedroom rental apartment units and 14 three-bedroom units, also drew the praise of New Hampshire’s federal delegation.

“This is a wonderful example of what can and should happen in our community,” said Claflin. “We’re in the middle of an affordable housing crisis across the United States, in the state of New Hampshire, and especially in the communities of the North Country. Hopefully, Lloyd’s Hills is the start of something new and can be an example and one answer to the problems.”

AHEAD property management has already leased about half of the 28 units, and families can begin moving in on Monday.

It is also AHEAD’s first project that includes solar energy from a 100kW solar panel array that will reduce utility costs for tenants, said Claflin.

“We hope to be able to use that technology in our future projects,” he said.

Providing the federal low-income housing tax credits that made up the bulk of Lloyd’s Hills financing was the New Hampshire Housing Finance Authority.

“This project had been so challenging over such a long period of years,” said Rob Dapice, managing director for the NHHFA. “For a lot of affordable housing projects, these projects are very hard to put together. As AHEAD steered this project through the incredible series of obstacles over years to bring it to fruition, it got harder and harder and we had to evaluate if we were still committed to the project the way Mike and his team were.”

In the last two years, the total project estimate rose by $2 million from the delays that inevitably drove up construction costs, said Claflin.

As the NHHFA talked through its decision-making, Claflin told the agency of the importance of Lloyd’s Hills, said Dapice.

“As a state-wide organization with a mission of serving the housing needs of people around the state, we had to reflect on the fact it would be hard to serve the needs of residents in the North Country without a partner like AHEAD,” he said. “When Mike came to us and said this project needs to happen and this is what we need to make it happen, we all got in the boat together and pushed out from the shore. It’s an incredible relief to be able to touch down on the opposite shore.”

Dapice thanked all of those involved who made it happen, including the construction contractor, H.P. Cummings, of Woodsville.

“You guys have done something amazing here,” he said.

Chuck Henderson, North Country representative for U.S. Sen. Jeanne Shaheen, D-NH, said the new AHEAD project and others like it are vital for the region’s economy.

“Housing like this is the key to economic development moving forward,” he said. “This has a lot of ripple effects throughout the community.”

Henderson read a letter from Shaheen.

“In the North Country and throughout New Hampshire, the shortage of affordable housing is holding back economic growth, but your persistent efforts here in Bethlehem will add vibrancy to this community,” wrote Shaheen. “For the final months of this pandemic and for decades to come, families will enjoy life in these energy-efficient homes set amidst conserved forest lands with trail access.”

Ben Belanger, special assistant for the North Country for U.S. Sen. Maggie Hassan, D-NH, read a letter from Hassan, who wrote that “affordable quality housing is critical to our economy, our quality of life, and helps build strong communities. AHEAD not only strengthens our middle class and ensures that working families can thrive, but it also helps businesses grow.”

In a letter read by Brian Bresnahan, her North Country representative, U.S. Rep. Ann Kuster, D-NH, noted AHEAD’s 30th anniversary and said the organization “has been bringing people home since 1991.”

“Lloyd’s Hills will provide affordable housing for working families and support the growth of our local businesses and economy,” wrote Kuster. “For too long regional housing shortages have hindered the ability to hire, train and maintain long-term employees. Situated with a short commute to regional industry and manufacturing centers, Lloyd’s Hills is uniquely placed to meet the needs of working families.”

Lloyd’s Hills, which is the very first name of Bethlehem before it was incorporated in 1799, sits on a 44.47-acre parcel that contains a 31.75-acre conservation easement.

The site was selected because of its access to municipal water and sewer and proximity to the Bethlehem village and the school, but it was not without its challenges that included slopes, wetlands, and difficulties in obtaining local approvals, said Claflin.

“Twenty-eight families will live here, the children will populate the schools, the young parents will hopefully populate the local school and town committees, and the balance of the residents will support this wonderful community of Bethlehem,” said Claflin.

After 10 years of looking to buy property in the Lincoln-Woodstock area, AHEAD bought eight acres in North Woodstock and plans to eventually build up to 80 housing units during a phased development, said Claflin.

An interesting addition to this article, perhaps in place of a few paragraphs of self-congratulation, would be a sentence about the cost per housing unit.

Does anything seem wrong with this picture? Yes, affordable housing is very important. But when building a single affordable housing unit costs the same as buying 2-1/2 average homes, there would seem to be a management problem...