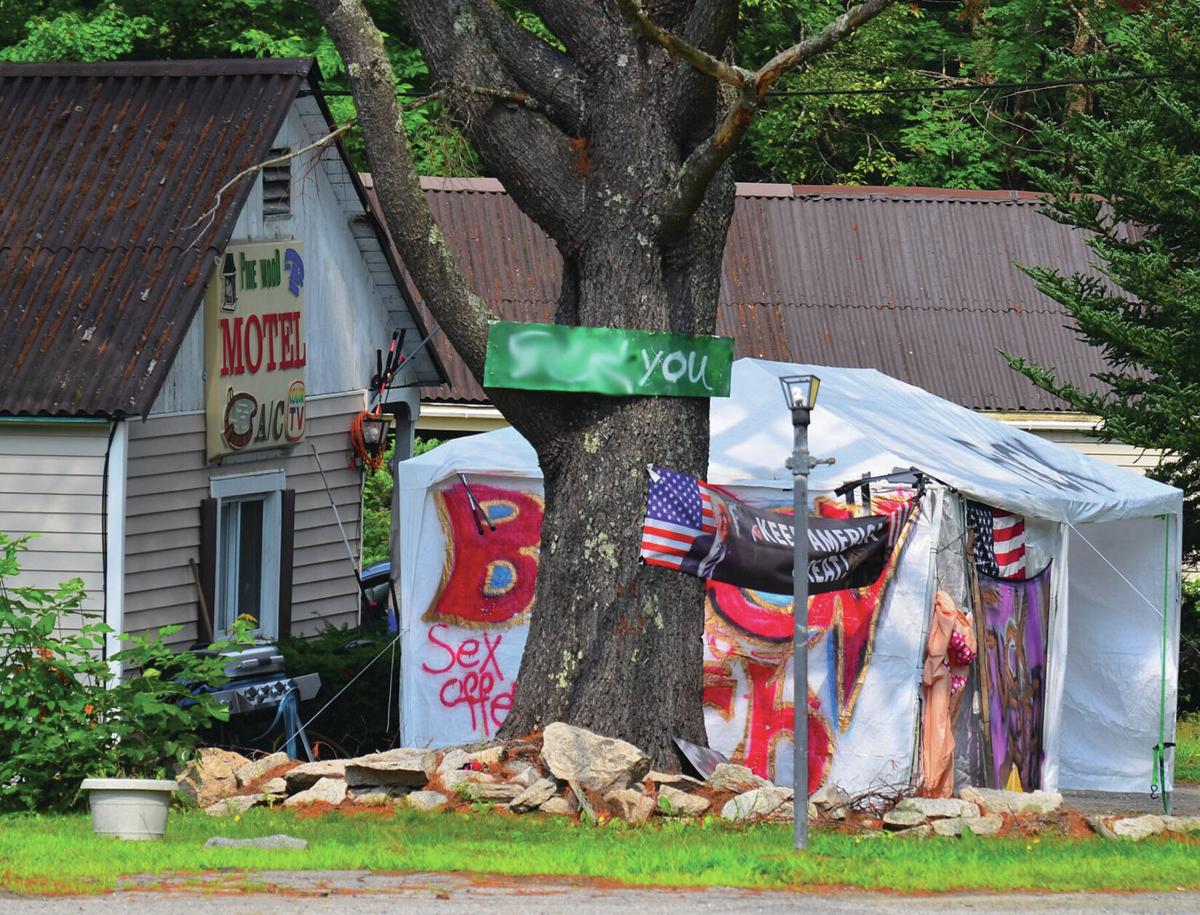 Editor's Note: Photo was digitally altered. After being asked by frustrated residents about what the town of Bethlehem can do about vulgar signs now up for nearly two months at the Pinewood Motel, selectmen on Monday said there's little that can be done unless the town wants to end up in a First Amendment lawsuit it would lose, along with money in legal fees. (File photo by Robert Blechl) 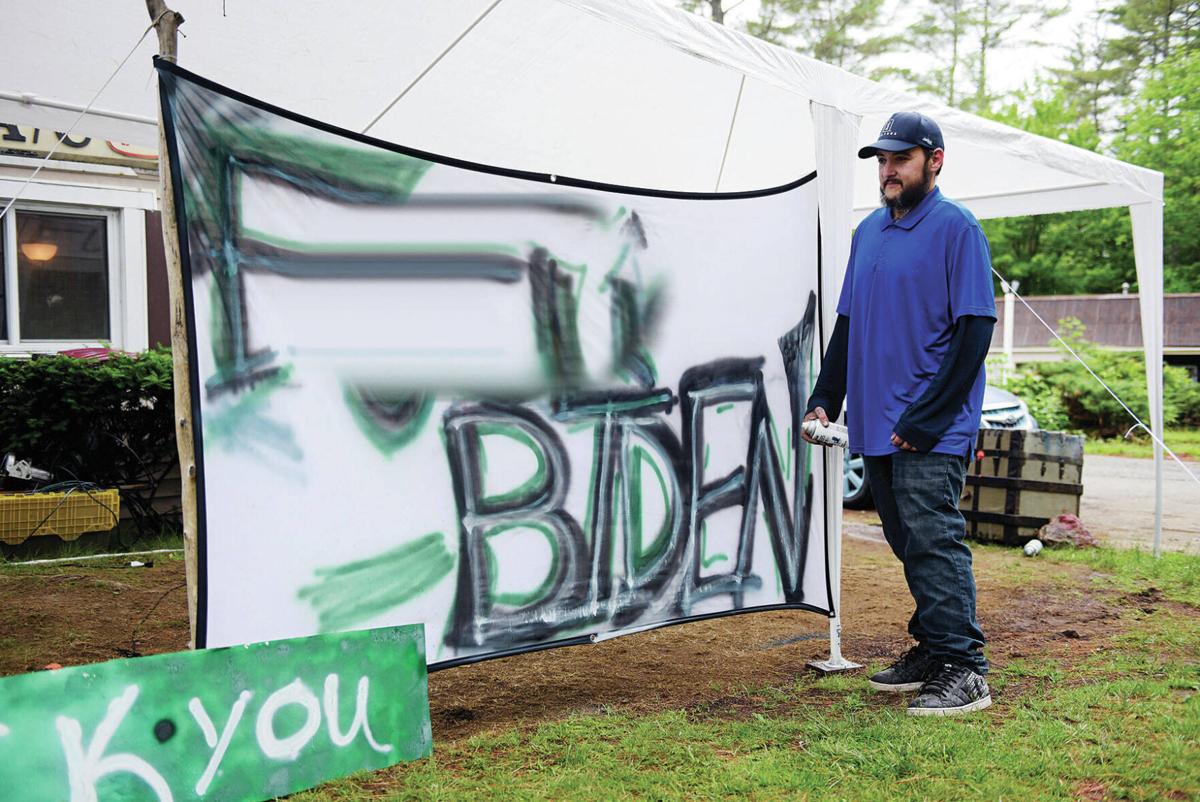 Editor's Note: Photo was digitally altered. Ryan Collins stands with hand painted signs outside of the Pine Wood Motel in Bethlehem, N.H., on Thursday, July 8, 2021. The signs replace a flag carrying the same message, which an unidentified person allegedly burned the night before. (File Photo by Paul Hayes)

Editor's Note: Photo was digitally altered. After being asked by frustrated residents about what the town of Bethlehem can do about vulgar signs now up for nearly two months at the Pinewood Motel, selectmen on Monday said there's little that can be done unless the town wants to end up in a First Amendment lawsuit it would lose, along with money in legal fees. (File photo by Robert Blechl)

Editor's Note: Photo was digitally altered. Ryan Collins stands with hand painted signs outside of the Pine Wood Motel in Bethlehem, N.H., on Thursday, July 8, 2021. The signs replace a flag carrying the same message, which an unidentified person allegedly burned the night before. (File Photo by Paul Hayes)

BETHLEHEM — More than a dozen people face eviction after new owners took over the Pinewood Motel.

The property was acquired by neighboring Presidential Mountain Resort in September and those living in the 14-unit motel were handed eviction notices this month. They have until Nov. 15 to vacate the premises, barring legal challenges.

Clearing the property would solve a thorny problem, removing tenant Ryan Collins whose profane political signs have been a source of controversy.

However, it would leave 17 people homeless, ranging from children to seniors, most of them on low- or fixed incomes.

April Hibbard, a Select Board member and the town’s welfare administrator, worries that some tenants will be left in the lurch.

“There are some, it’s going to be really difficult to find them housing,” Hibbard said. “There’s an older woman there, she’s sick and has a very limited income. To find housing she can afford will be hard. Those are the ones that I worry about.”

As the welfare administrator, Hibbard has launched relocation efforts. Over the past two weeks she has reached out to tenants and contacted landlords and shelters.

There are challenges. New Hampshire has a significant shortage of affordable housing and shelter beds. Some motel residents lack transportation, smartphones and internet access. Others have legal histories or mental health issues that limit housing options. Those factors, and more, make it tougher to find a new place to live.

News of the evictions will be cheered by some. The profane signs, which said “F—- Biden” among other things, occupied a highly visible spot on Route 302 and were met with widespread criticism and condemnation. The signs remained up because town officials and law enforcement determined they were protected free speech.

First Of Rail Trail Village Apartments Could Be Ready In Spring

The controversy tarnished the motel’s reputation. However, Hibbard said, nearly half of Pinewood Motel residents hold jobs and three have lived there for 16 or more years.

“There’s an awful lot of people there that work. I think that would surprise a lot of people. Because people make assumptions,” Hibbard said.

The new owners have submitted permits for renovation and demolition, which have yet to be approved.

Eviction notices were handed out on Oct. 10.

In addition to the eviction notices, the new owners ended trash service for tenants of the Pinewood Motel. A dumpster on the property was removed, and those living there have no way to dispose of household trash.

Representatives of PMR did not respond to requests for comment.

“Some people are already packing up, and they have nowhere to throw their stuff,” Hibbard said.

It is unclear if the evictions can or will be appealed in court. Calls to New Hampshire Legal Assistance were not returned.

The federal Centers for Disease Control moratorium expired on Aug. 1. An attempt to renew it through October was struck down by the U.S. Supreme Court on Aug. 26.