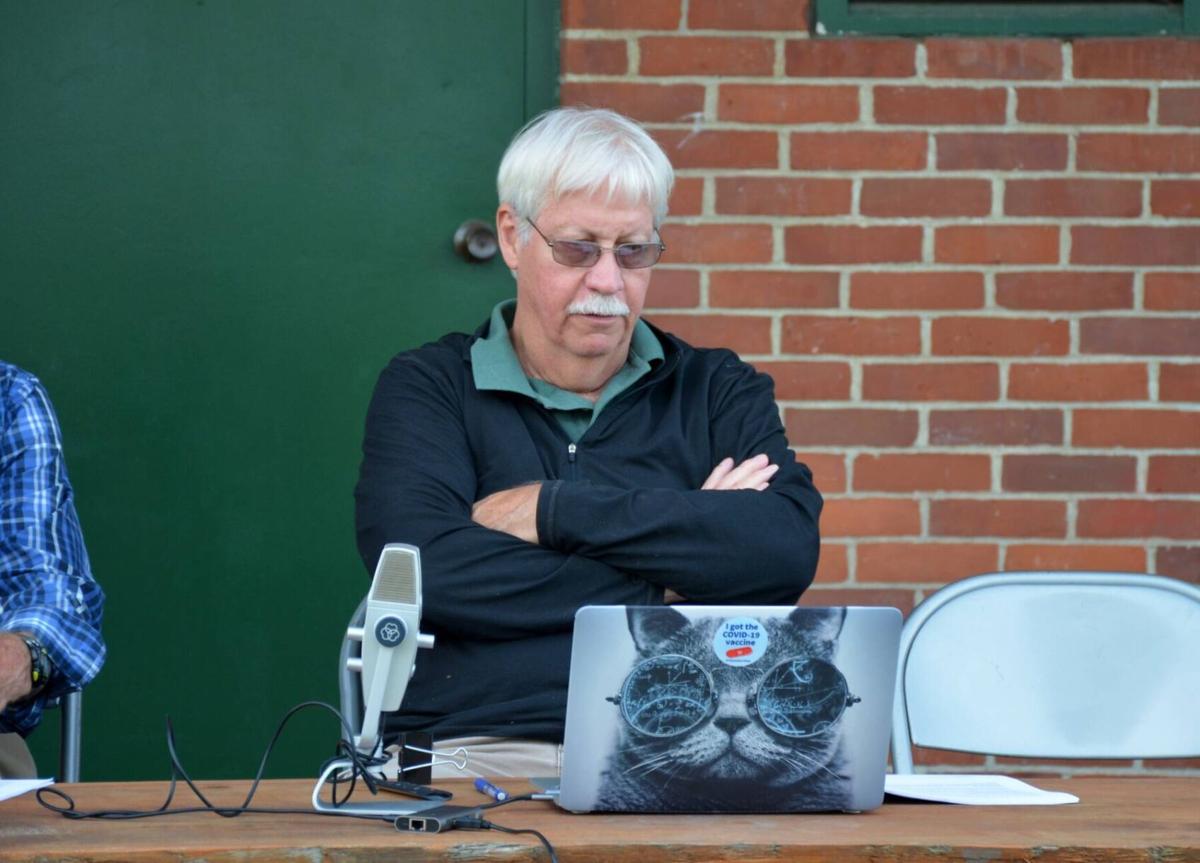 CCSU Superintendent Mark Tucker, pictured here on Aug. 16 while in conversation with a Zoom participant, said Monday that CCSU employees will, one way or another, be required to get vaccinated or participate in regular testing. (File photo by Katherine Fiegenbaum) 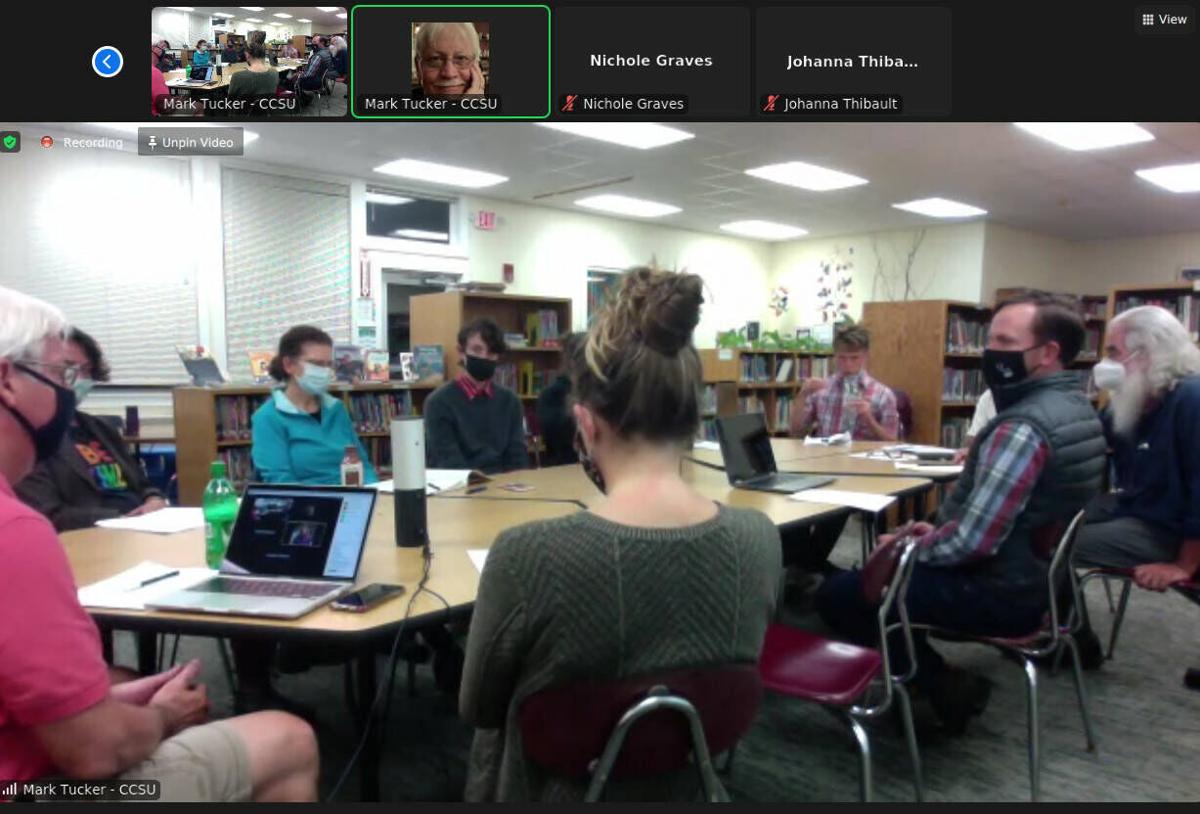 The Cabot School Board met for their regular monthly meeting on Monday, Sept. 27, 2021 in a hybrid in-person and virtual forum. 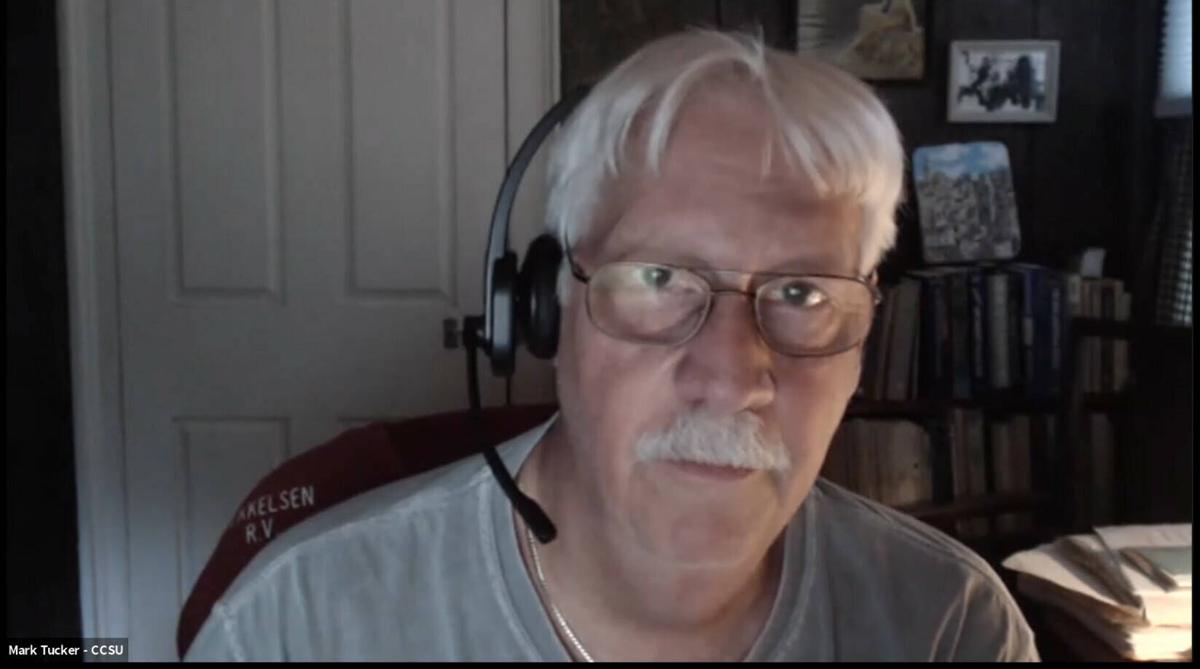 CCSU Superintendent Mark Tucker said Monday that CCSU employees will, one way or another, be required to get vaccinated or participate in regular testing. (File photo)

CCSU Superintendent Mark Tucker, pictured here on Aug. 16 while in conversation with a Zoom participant, said Monday that CCSU employees will, one way or another, be required to get vaccinated or participate in regular testing. (File photo by Katherine Fiegenbaum)

The Cabot School Board met for their regular monthly meeting on Monday, Sept. 27, 2021 in a hybrid in-person and virtual forum.

CCSU Superintendent Mark Tucker said Monday that CCSU employees will, one way or another, be required to get vaccinated or participate in regular testing. (File photo)

One way or another, Caledonia Central Supervisory Union (CCSU) employees — which includes those at Danville, Barnet, Waterford, Peacham, Walden and Cabot Schools — are going to have to either get vaccinated or submit to required periodic testing.

That’s according to CCSU Superintendent Mark Tucker, who told the Cabot school board the news during their regular monthly meeting on Monday evening.

Tucker said that the mandate would either come through an agreement with all three staff associations, currently in progress, or through the federal Occupational Safety and Health Administration standards announced by President Joe Biden, which have yet to be published.

The Superintendent made clear that employees who do not want to be or cannot be vaccinated would need to submit to regular testing.

Biden has spoken of a vaccine mandate for organizations with more than 100 employees; the state of Vermont, as an OSHA partner, has to implement the guidelines to at least the same degree as the federal government. However, Tucker noted that there has been some discussion indicating that the 100-employee threshold might be waived for Vermont school districts.

According to Tucker, within CCSU, only the Caledonia Cooperative School District (CCSD, which includes Barnet, Walden and Waterford Schools) might have more than 100 employees.

Tucker noted to the board that the National Education Association and the Vermont-NEA, the largest union in the state, have expressed their support for mandated vaccinations.

Later in the meeting, Tucker said that the OSHA mandate would likely not be in place before Thanksgiving, while the agreement with the staff associations would likely come in the next couple of weeks. He also noted that staff would be compensated if they had a negative reaction to the vaccine and needed to take time off — a measure that CCSU has been implementing anyway.

Tucker made clear that he would not be pushing for any mandated vaccination of students without direction from authorities.

“If we get to the point where there’s a mandate for the vaccination of students, that’s coming from somewhere else,” he said. “I’m not taking that on, that’s going to have to be a state decision.”

Tucker also told the school board that weekly COVID-19 surveillance testing, piloted within CCSU last year, would be starting for staff on Tuesday, Sept. 28. Students will start to be tested next week.

Surveillance testing is an opt-in process. According to Tucker, 470 people (staff and students) across the SU's seven schools and central office have turned in their consent forms.

On Tuesday, Sept. 28, Tucker sent a newsletter out to parents to remind them to fill out surveillance testing forms for their children, if they are willing, as well as detailing two additional testing options to come.

“I feel very confident in saying that having your children home in quarantine because they are identified as a close contact of a person who has COVID-19 is problematic for most of you — especially for parents of younger children where childcare is a necessity,” he wrote. “And I am absolutely certain that every single teacher and staff member in our seven schools wants your child in school with them every single day. For those two reasons, I am writing today to advocate for your participation in COVID-19 testing that is, or soon will be, available in your child’s school.”

Tucker explained that “surveillance testing is useful as a means to identify asymptomatic infected persons so that we can reduce exposure and thereby reduce the number of persons — students and staff — who have to quarantine.”

Tucker went on to detail two additional testing protocols being worked on by the state in order to reduce the number of students who have to go into quarantine because they are considered a close contact, defined as more than 15 minutes of exposure in a single day in the same classroom, regardless of mask-wearing.

The first protocol, Test To Stay, would allow students who are asymptomatic, unvaccinated and identified as close contacts to receive a daily antigen test. As long as the test is negative, the student can remain in school.

The second, called “Responsive Testing” would provide access to home PCR tests in order to eliminate the need for children to go to a test site to get the required negative test to return to school following a required quarantine.

Tucker told parents that he needs to wait for formal written guidance before providing more information about the two programs.

“Surveillance testing, Test To Stay, and Response Testing are all different, but they are intended to work together, with the aim of limiting the amount of lost instruction time for your children,” Tucker concluded. “Every one of these programs will place a demand on our staff at school to ensure that they are done correctly. I can say right now that we will find a way to make them all work because we are committed to the idea that your children should be in school.”

Cabot student Brody Moran, a student representative to the school board, asked during the meeting that the mask mandate stay even if 80 percent of eligible students are vaccinated, as indicated by initial state guidance.

“Don’t worry about it,” replied Tucker. “It’s not going to happen.”

Notice how Tucker gleefully speaks of passing responsibility and letting non elected corporations representing Big Pharma like the corrupt CDC use dictatorial powers to coerce all into taking their Franken shots.

These administrators must be being paid by pig Pharma programs or have very low IQS. Notice they admit the mask does not work but they demand the kids wear them anyway. Pure coercion and child abuse. Look at Tucker, trying to be cute and likeable with a cat sticker on his lab top while ordering abusive tactics on administrators and kids, He should be fired immediately.

The richest town in every state