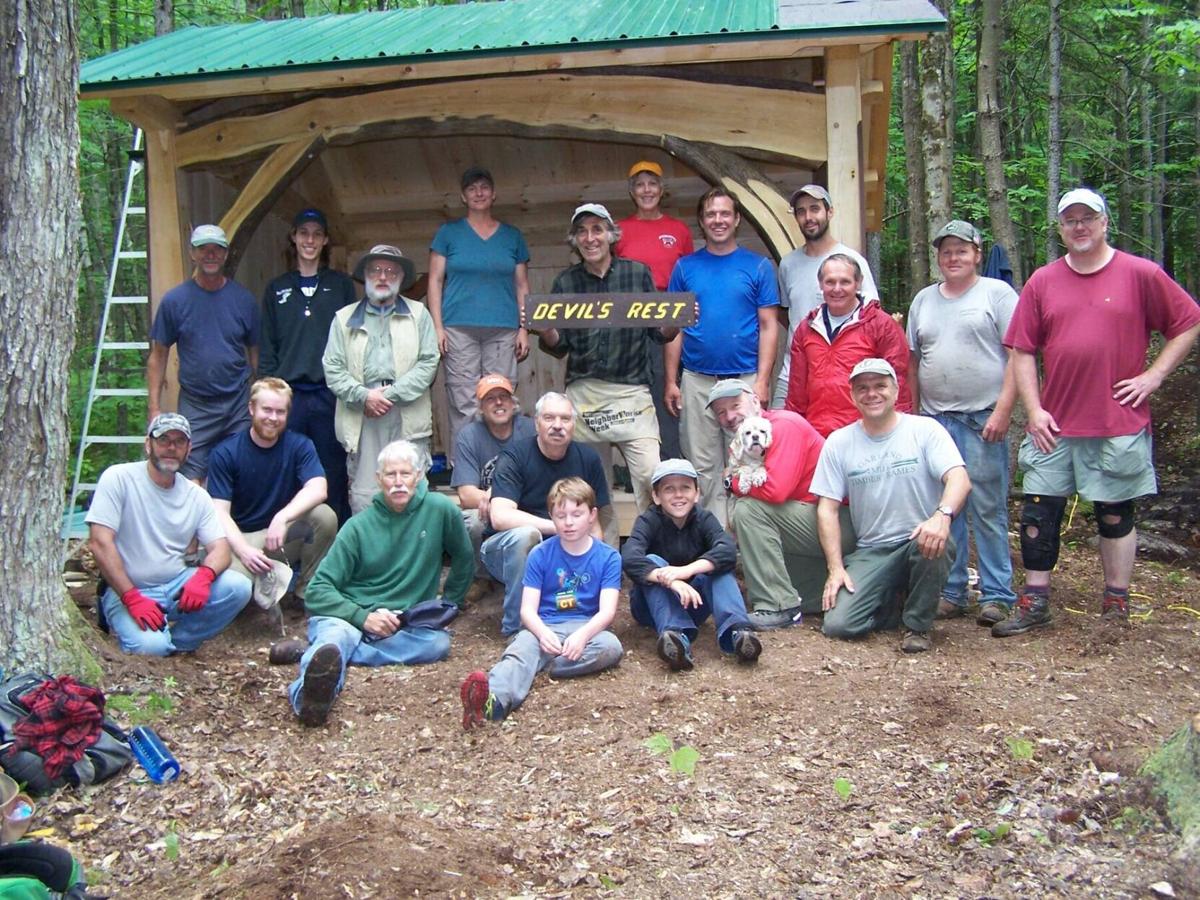 A large team of volunteers showed up to help construct the Devil’s Rest shelter on the Cohos Trail in 2018. Kim Nilson, founder, can be seen in the center holding the shelter’s sign. (Courtesy photo) 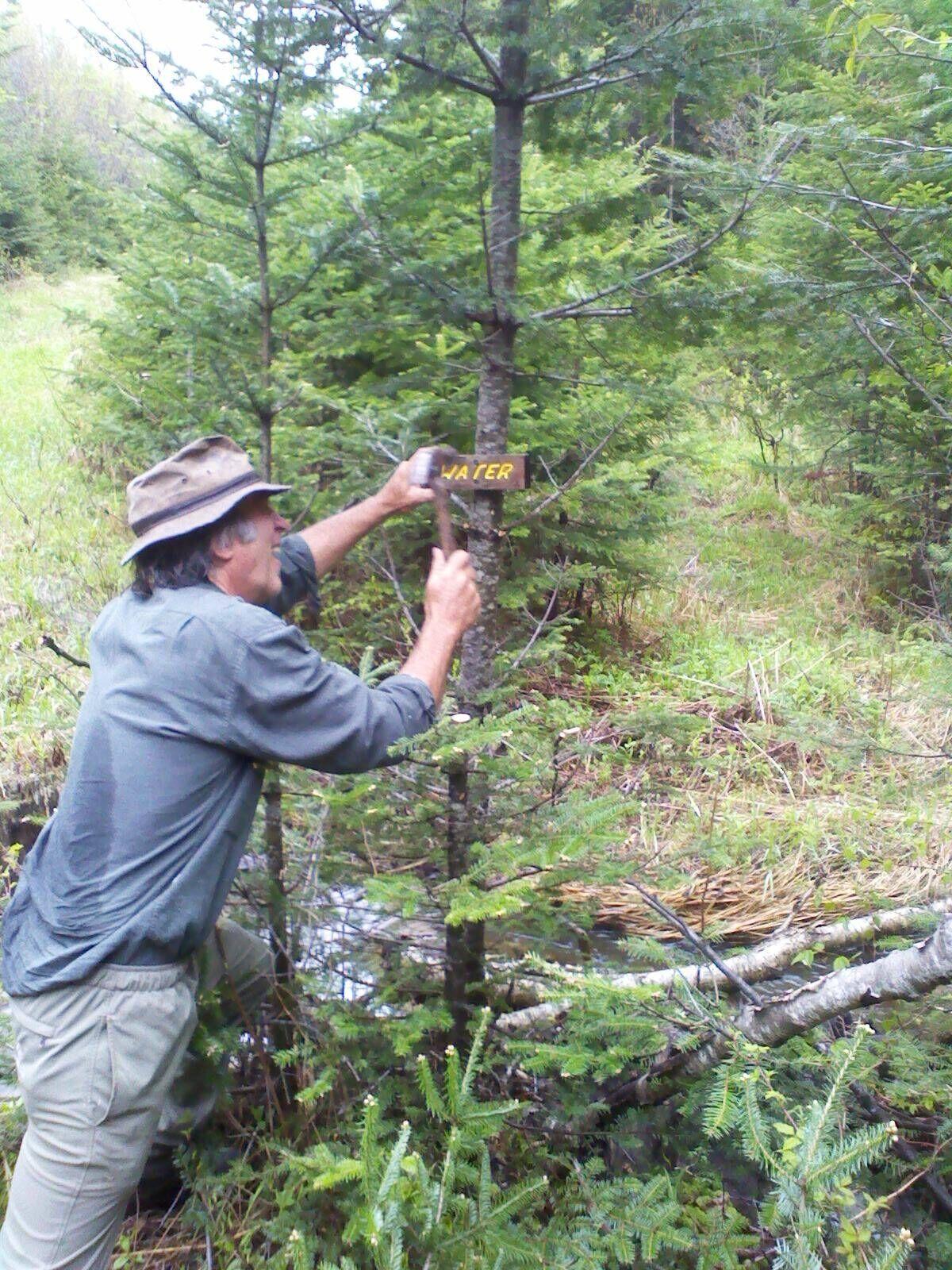 Cohos Trail Association founder Kim Nilson attaches a "joke sign" pointing out the water in the nearby stream in Gadwah Notch a few years ago. (Courtesy photo)

A large team of volunteers showed up to help construct the Devil’s Rest shelter on the Cohos Trail in 2018. Kim Nilson, founder, can be seen in the center holding the shelter’s sign. (Courtesy photo)

Cohos Trail Association founder Kim Nilson attaches a "joke sign" pointing out the water in the nearby stream in Gadwah Notch a few years ago. (Courtesy photo)

“This is a biggie, this is a really big thing for us,” said Kim Nilson, founder of the Cohos Trail Association and current chairman of its board, on Thursday afternoon.

The association, which plans, builds, funds and maintains the long-distance Cohos Trail, got word from the state last week that they are the recipient of a major grant from the competitive Recreational Trails Program. $28,400 in grant funds, plus $7,383 of in-kind labor from trail volunteers, will be used next summer to eliminate a rather arduous section of road walking currently a part of the 170-ish mile trail system.

While the trail has been finished for a couple of decades — the first person to thru-hike the entire Cohos Trail was Susan Kenn of Lincoln, N.H., in 1999 — several portions of it follow established roads that also see all-terrain vehicles or car use.

“Most of the Cohos Trail is trail, but there are some sections that aren’t trail,” Nilson said. “We want to get as much away from that as we possibly can over time. This [piece] is one of the keys because it will eliminate a considerable amount of road walking.”

The new section of trail will run from Coleman State Park in Stewartstown directly north to Dead Water Road, just south of Lake Francis. According to Nilson, the majority of it will be either new trail or rehabilitated equestrian or snowmobile trails.

“It takes forever for hikers on the road to do it right now,” he said, noting with some sadness that the trail will be losing a couple of great view spots, as well as the option to stop at Rudy’s Cabins and Campground, currently a part of the indirect trek. “But what we’ll have [after this work] will be a wild trail for most of the route.”

Funding for Recreational Trails Program grants is generated from federal gas tax dollars paid on fuel purchases for off-highway recreational vehicles and snowmobiles. This grant, the second the Cohos Trail Association has obtained from the RTP, was applied for by former association President Ken Vallery and his wife, Kim Votta, a professional consultant and grant-writer.

Nilson says that the Cohos Trail has been fortunate to also receive funding from the Neal and Louise Tillotson Fund, administered by the New Hampshire Charitable Foundation.

“[The Tillotson Fund] has really been a backbone vertebra for the Cohos Trail for a long time now … it’s made it possible for it to exist, really,” he said. “And the Cohos Trail is a big recreational asset running right smack through the central spine of the county.”

“We are truly fortunate,” Nilson added. “I guess why we get some of these grants is because people recognize the trail as an economic engine. It’s just as important as the ATVs or the snowmobiling up there. It certainly doesn’t bring in as much money as those do, but every bit of incremental recreation dollars are important to the life of Coös County.”

Nilson notes that the trail is actually international; it runs from Crawford Notch to the Canadian border, where it links up with Québec trail system for a total of about 250 miles. However, he said, chuckling, that he hopes the trail will one day extend all the way to Québec City so weary hikers can enjoy real French pastries at the conclusion of their journey.

One other, smaller chunk of road walking, also exists as part of the current trail, and the association is waiting on landowner permission to eliminate it. Following those pieces, the association’s last big goal is to build itself a permanent headquarters along the trail that will also serve overnight hikers.

“My whole hope is that we get to [build] that and we get to have a big grand opening party … people can stay there, and I’ll get with a couple musicians and entertain people at night and give free beer to everybody,” Nilson, now 73, said. “And I get to say thank you, a heartfelt thank you. That’s my goal before I die.”

Nilson first envisioned the trail in an editorial published in the Coös County Democrat in 1978, to which he heard zero response and didn’t revisit until a rainy family vacation in 1995 when he sat down with some maps.

He was originally inspired to start exploring the wilds of the state’s northernmost county by conversations with former Fish and Game conservation officer Arthur Miuse and Groveton Papers Company employee Ralph Rowden, who told enthralling tales of the big Nash Bog Dam Disaster in 1969.

Nilson had to see the environmental disaster area himself, and after that, he was hooked, fascinated by the region’s places, people, animals and stories. He saw his first moose from the old fire cabin on Sugarloaf Mountain in Stratford, paddled lakes, ran into black bears, osprey and barn owls, and walked along the Connecticut River, trying to find links to turn into the now-oft-hiked Cohos Trail.

“It just became something I had to do, I had to explore this stuff and be out there and do it,” he said. “That coalesced over time into the Cohos Trail. What a wonderful experience for me, and now it’s a wonderful experience for other people: they can get out there, they can see that part of the globe that nobody used to be in except for loggers.”

In a twist of fate, Nilson moved with his family to Chesterfield, N.H., down near Brattleboro, in 1980, and has lived there ever since. Currently, he serves as manager for the 13,000-acre Pisgah State Park.

“Much of the [Cohos] Trail was done by rocketing back and forth on I-91,” he said, recalling planning time spent at his computer, meetings held in Concord and Lancaster, and the actual trail work itself. However, Nilson gives the majority of the credit to the many who joined with him to make the trail a reality.

“I had an idea, but I didn’t build the trail,” Nilson said. “Volunteers by the hundreds built the trail, by the thousands and thousands of hours. These volunteers bought into the idea somehow, they made it happen. I am truly, truly indebted to those people.”