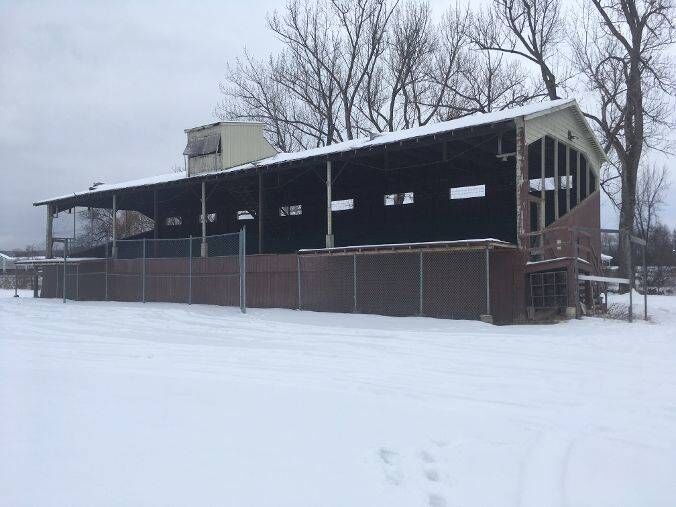 Newport City's proposed budget includes funding to demolish the grandstand in Gardner Park because of a risk of collapse. (Photo by Scott Wheeler/Vermont's Northland Journal) 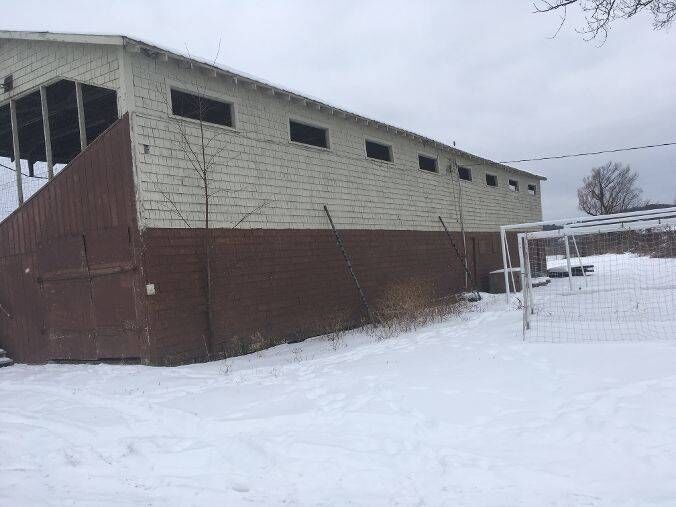 The back of the Newport City grandstand is visible from Vermont Route 191 across the Clyde River. (Photo by Scott Wheeler/Vermont's Northland Journal) 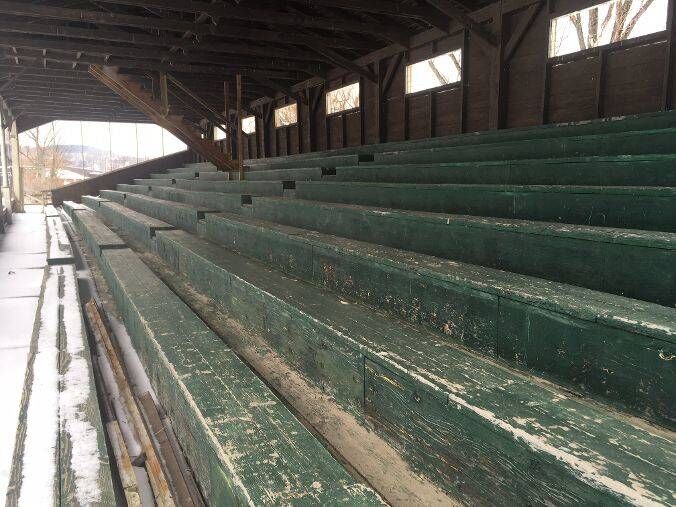 The inside of the Newport City grandstand shows its age. (Photo by Scott Wheeler/Vermont's Northland Journal)

A passenger train runs on tracks across the Clyde River behind the Newport City grandstand during flooding in Gardner Park in this historic photograph. (Courtesy Photo)

Newport City's proposed budget includes funding to demolish the grandstand in Gardner Park because of a risk of collapse. (Photo by Scott Wheeler/Vermont's Northland Journal)

The back of the Newport City grandstand is visible from Vermont Route 191 across the Clyde River. (Photo by Scott Wheeler/Vermont's Northland Journal)

The inside of the Newport City grandstand shows its age. (Photo by Scott Wheeler/Vermont's Northland Journal)

A passenger train runs on tracks across the Clyde River behind the Newport City grandstand during flooding in Gardner Park in this historic photograph. (Courtesy Photo)

NEWPORT CITY — A group of interested citizens including Mayor Paul Monette started meeting Wednesday about the future of the old grandstand in Gardner Park.

The discussion is driven by the decision by the city council to include funding in the proposed city budget to cover the demolition of the 81-year-old grandstand.

The council discussed in December the funding for demolition as part of the city’s parks and recreation budget. The council is not obligated to go through with the demolition just because the funding is in the budget.

News about the demolition funding began circulating in recent weeks. That prompted extensive comment on social media and elsewhere about the history of the grandstand built in 1939, memories of city residents who enjoyed watching baseball games from its seats, why it is in a dilapidated state and what could be done to keep it.

The discussion about the grandstand coincides with plans in the works to significantly upgrade the playground at Gardner Park, adding a splash park among other features.

City Manager Laura Dolgin said in a statement this week that the city has allowed the grandstand to fall into disrepair over decades.

“The grandstand sadly is in a state that rehabilitating it is too costly and it has gotten to the point where our insurance coverage is concerned,” Dolgin stated.

“We also had a council member … in 2020 inquire about the roof as it looked like things were about to blow off of it, causing a dangerous situation.

“We are not able to repair it without concerns of safety, so it has gotten to the point where taking it down and starting over is the safest and most cost-effective option.

“I cannot explain to you why the grandstand is facing this state of disrepair as it occurred long before I arrived on the scene,” Dolgin said.

“I know this will come hard to some members of our community as it represents another time in the city’s history and it is important. I respect this but I do not have an alternative solution either.

“It has been my suggestion to try and preserve some of the beams or perhaps the cupola to be used in whatever comes next. But the viability of actually making that happen needs to be assessed by someone who has the skills to determine if it is worth doing so as we are not sure if there is anything left usable that can be carried forward.”

Monette said he is actively involved in efforts to find an alternative to demolition.

“As mayor, this is a case where I disagree with the recommendations to demolish the grandstand and the monies being budgeted before alternatives are looked at. I was not going to oppose the entire city budget over this one line item,” Monette said in a statement Wednesday.

“All avenues must be researched before just demolishing it.

“This is a piece of our history and it is too easy to tear things down before thoroughly researching alternatives. There are only a handful of historical structures left in Newport and most communities are interested in preserving their history while also looking to the future.

“This has not always been the case in Newport’s past. The grandstand could be used for many more activities besides just watching baseball games as was done in the past. People need to think outside the box and look at all the potential uses …,” Monette said.

“The main problem is Newport turned its back on it over the years regarding maintenance and that is sad.”

Monette said recent news coverage of the funding for demolition prompted Cartee to step forward to organize the committee to research alternatives.

“The goal will be to either find solutions for saving the existing structure or working on ideas for a replica,” Monette said.

“The committee will look into grants and fundraising and present ideas to the city. Currently, there are five people who have stepped up to be on the committee with more expressing an interest. I know I am pleased people are willing to put the time and effort into this.”

NEWPORT CITY — City Manager Laura Dolgin says she supports the formation of a committee to explore the future of the 81-year-old grandstand in Gardner Park.