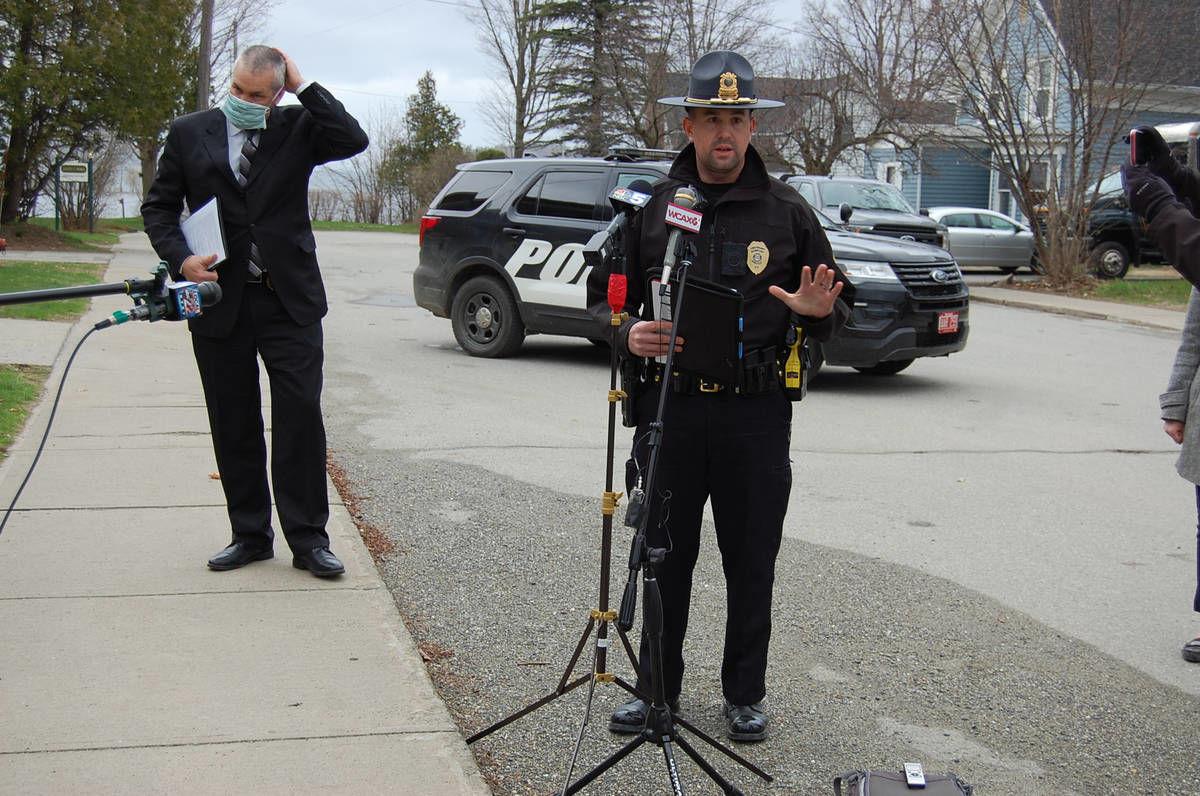 Newport City Police Chief Travis Bingham asks residents to seek mental health counseling if they need it due to COVID-19 during a press conference after a murder-suicide in Newport City May 4. (File Photo) 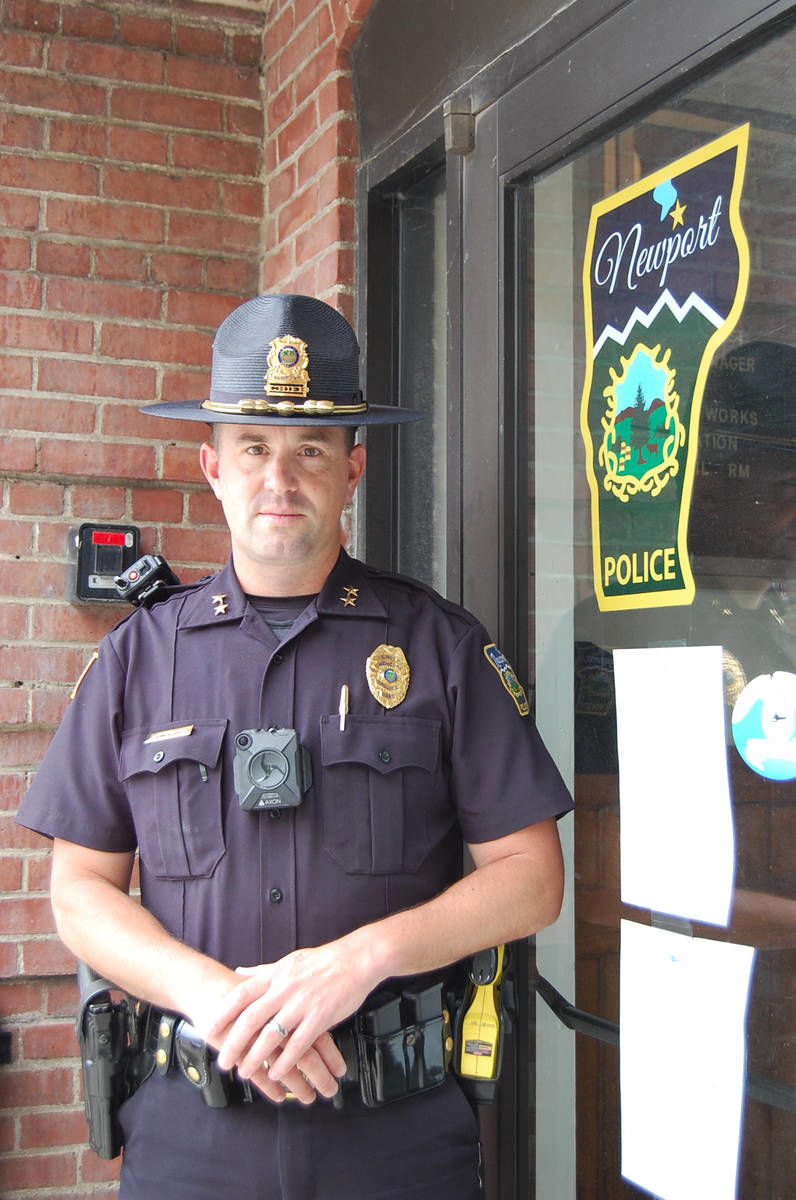 Newport City Police Chief Travis Bingham stands next to the logo of the Newport Police Department Friday at the entrance to the city municipal building. (Photo by Robin Smith) 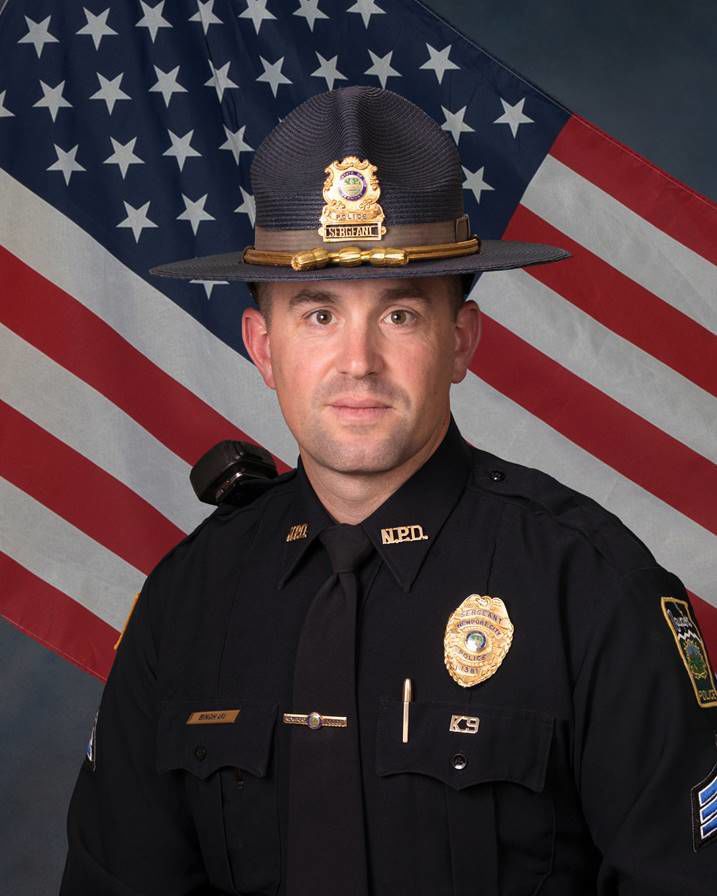 Newport City Police Chief Travis Bingham talks during a press conference after a murder-suicide in Newport City May 4. (File Photo) 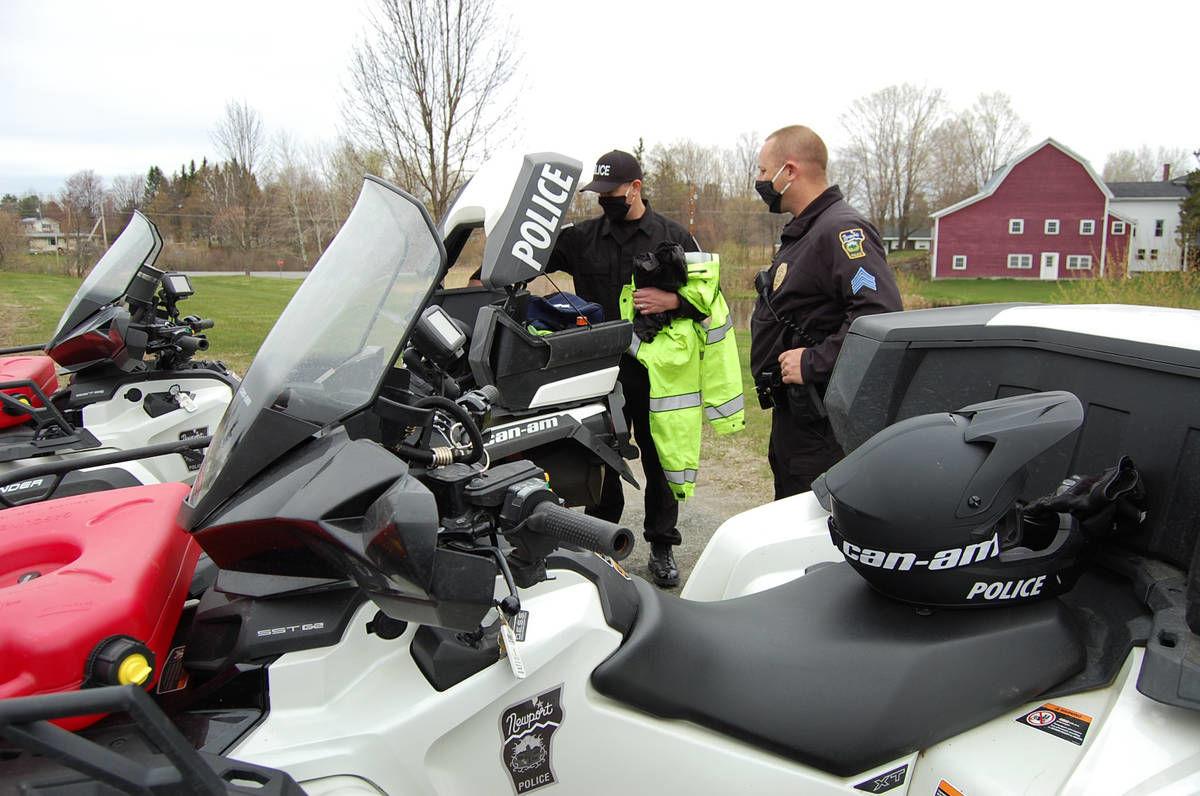 Newport City Police Chief Travis Bingham, at left, prepares for a first-ever caravan of ATVs through Newport City on May 15. At right is Officer Nicholas Rivers. (File Photo)

Newport City Police Chief Travis Bingham asks residents to seek mental health counseling if they need it due to COVID-19 during a press conference after a murder-suicide in Newport City May 4. (File Photo)

Newport City Police Chief Travis Bingham stands next to the logo of the Newport Police Department Friday at the entrance to the city municipal building. (Photo by Robin Smith)

Newport City Police Chief Travis Bingham talks during a press conference after a murder-suicide in Newport City May 4. (File Photo)

Newport City Police Chief Travis Bingham, at left, prepares for a first-ever caravan of ATVs through Newport City on May 15. At right is Officer Nicholas Rivers. (File Photo)

NEWPORT CITY — It wasn’t a surprise to most residents when the city’s new police chief, Travis Bingham, walked with protesters on Main Street in a rally for racial justice in policing organized by a high school student.

Community policing, from showing support for community activists to providing the first ever school resource officer at the local high school, has been a goal of the city’s police department for years and it continues with Bingham.

Newport City was among the first departments in Vermont to start using body cameras as part of a 21st century policing model promoted by President Barack Obama.

At a remote community forum last week and an interview Friday, Bingham talked about the six “pillars” under which the Newport Police Department operates, the work ahead and his own career in the department, from part-time patrol officer a year out of college to becoming chief at 40.

“I feel we have done a good job in the community,” he said.

One pillar requires a change from a warrior mentality to being a community guardian, including providing access to social services and positive interactions with residents and stake holders, he said.

Under the pillars, the department must:

- Build trust and legitimacy in the community. Trust comes, Bingham said, from foot patrols and involvement in the torch run, parades and school events.

- Do police oversight through data collection of traffic stops and arrests to find biases and banning ticket quotas, he said.

- Use technology and body-worn cameras which have been updated for high resolution and audio. The department uses social media to be transparent and reach out, and being responsive to public records requests and communications.

- Perform community policing and crime reduction, developing common goals with the community, relying on the community as extra eyes and ears, and engaging youth in the Explorer Program or ride-alongs.

- Do training and education, including leadership training for all officers. Active shooter drills and field training programs with community members as role players is really helpful, Bingham said.

Two officers are trained as field medics. More resources and more attention are needed in this area, Bingham said.

He’s hoping that young people will see community policing as a career and apply for several openings in the department.

Bingham experienced the change in emphasis to community policing while a rank-in-file member.

He’s proud of his career so far, a local son who has achieved his goal of being chief in his own community.

He grew up in Derby, the youngest of three boys. He attended North Country Union High School and focused on three varsity sports and thought he wanted to be an educator.

But after several years in education at Castleton, his middle brother Corey’s choice sounded better.

He switched and graduated in 2003 with a degree in criminal justice. He worked for a year in construction with his oldest brother Jason, making good money, but “doing a roof in the middle of winter when it’s 40 below” lost its appeal.

He followed in Corey’s footsteps and joined the Hardwick Police Department as a part-time officer in February 2004. Corey had joined the Orleans County Sheriff’s Department.

Chief Duquette hired Travis Bingham part-time that fall. He was promoted to full time and graduated from the Vermont Police Academy in May 2005.

He worked nights for two years and then became a K-9 officer, working with Odin and then Dax until 2018.

Bingham loved his work as a K-9 officer. “Where else can you wake up every day and bring your loyal partner with you by your side?”

He traveled the state for training, networked with different agencies, and made a difference in preventing and deterring crime in the area.

Bingham was promoted to sergeant and then lieutenant in 2019, becoming acting chief for several months while Chief Seth DiSanto was on medical leave. Bingham was appointed again as acting chief in the spring of this year and then named chief at 39 on May 18 - the day before his 40th birthday.

“I’m pretty proud of the fact that I started out as a patrol officer and worked my up through the ranks. To be able to get to a position of chief is a big accomplishment. It was always my goal,” Bingham said.

The support of his fellow officers “was a big factor for me.”

Two weeks later, Bingham handled a murder-suicide a block from the police department that left two people dead, one woman badly injured and three children without a father or grandfather.

He followed the community conversation about allowing ATVs downtown from the beginning last fall, and through the vote and rode at the head of an ATV caravan downtown.

The ATV situation is good but not perfect, Bingham said. Most of the problems stem from riders on streets where ATVs are not allowed, he said.

And then the department handled a bomb threat that shut down part of Main Street, leading to an arrest.

“I definitely got thrown into the ring of fire: with a pandemic, a murder suicide, the recent current events nationwide that is affecting community policing, the bomb threat. …”

“It all happened in a short amount of time.”

The community support for the department has been “tremendous,” Bingham said.

“I really think we are in a good spot here,” he said. “We can always get better.”