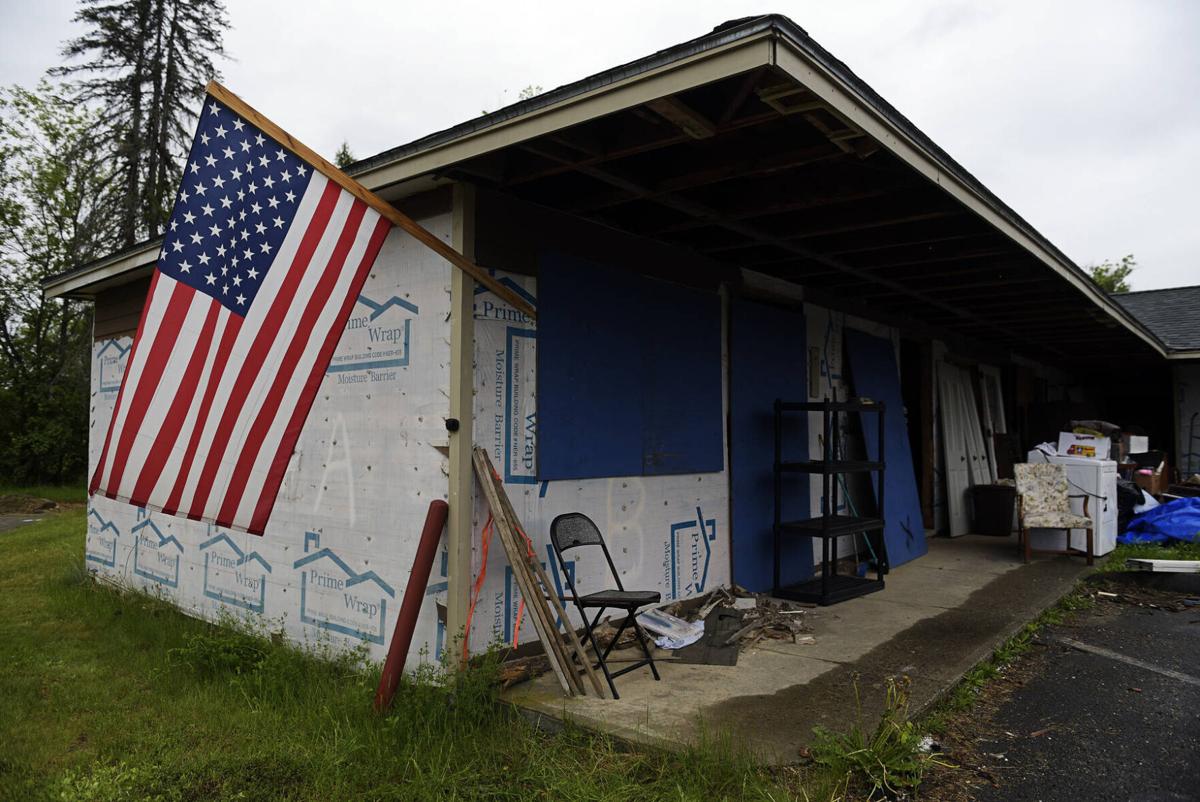 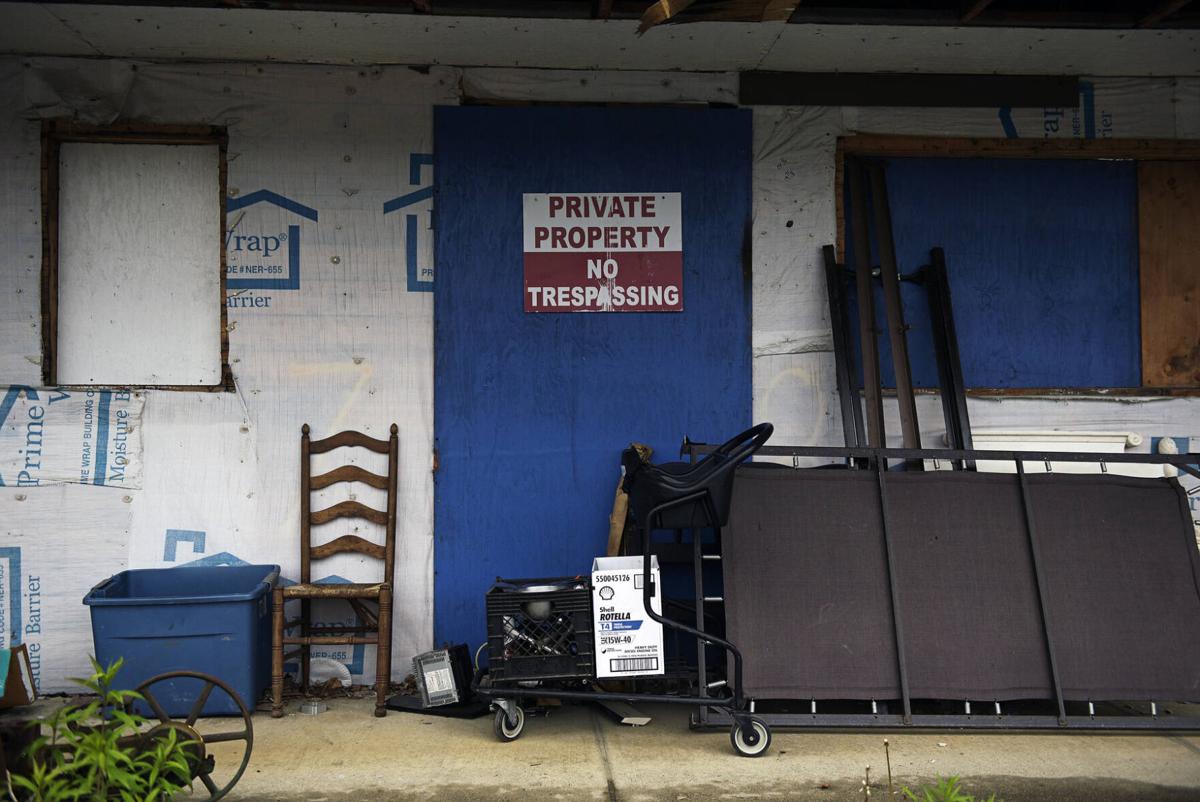 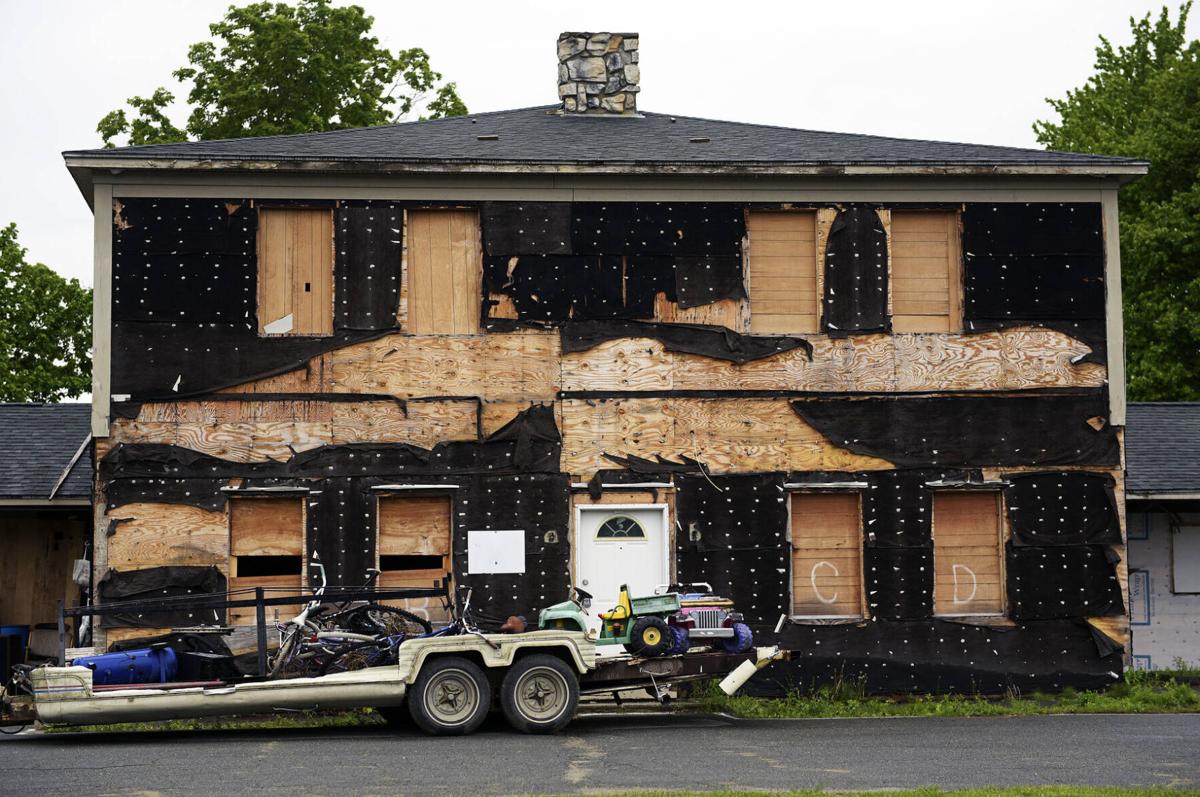 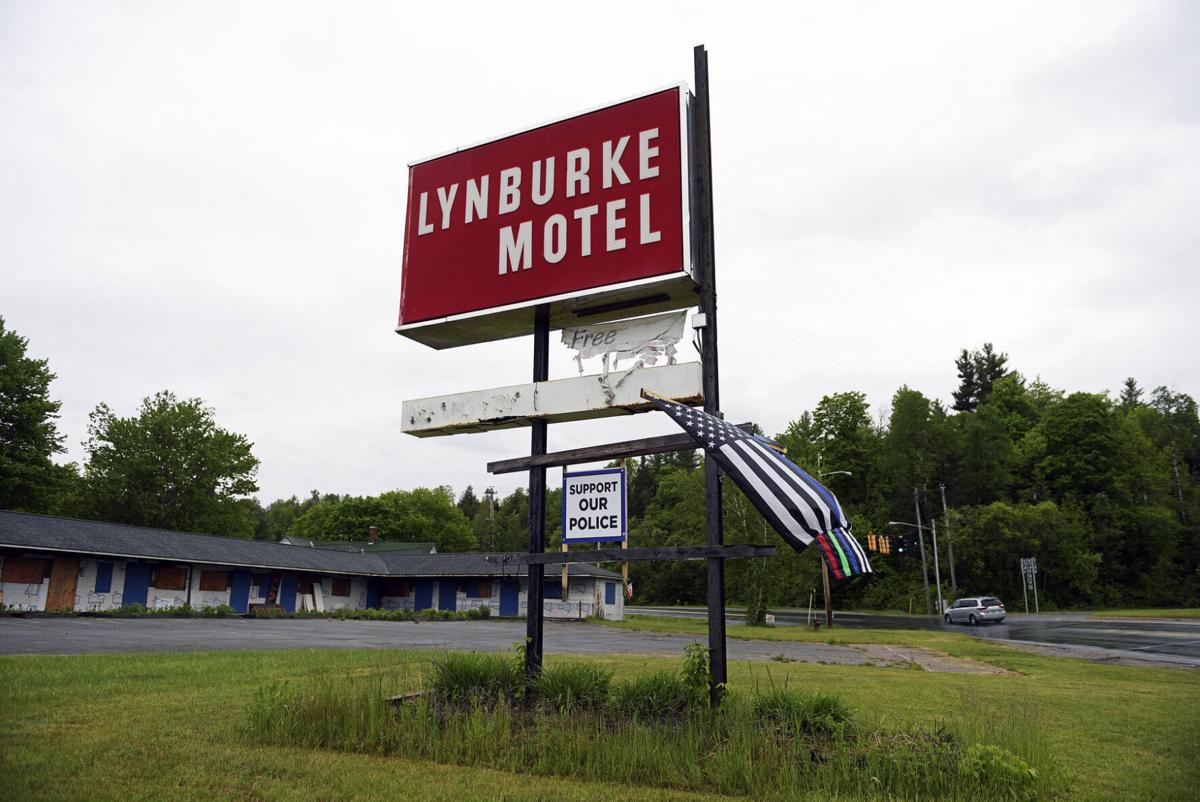 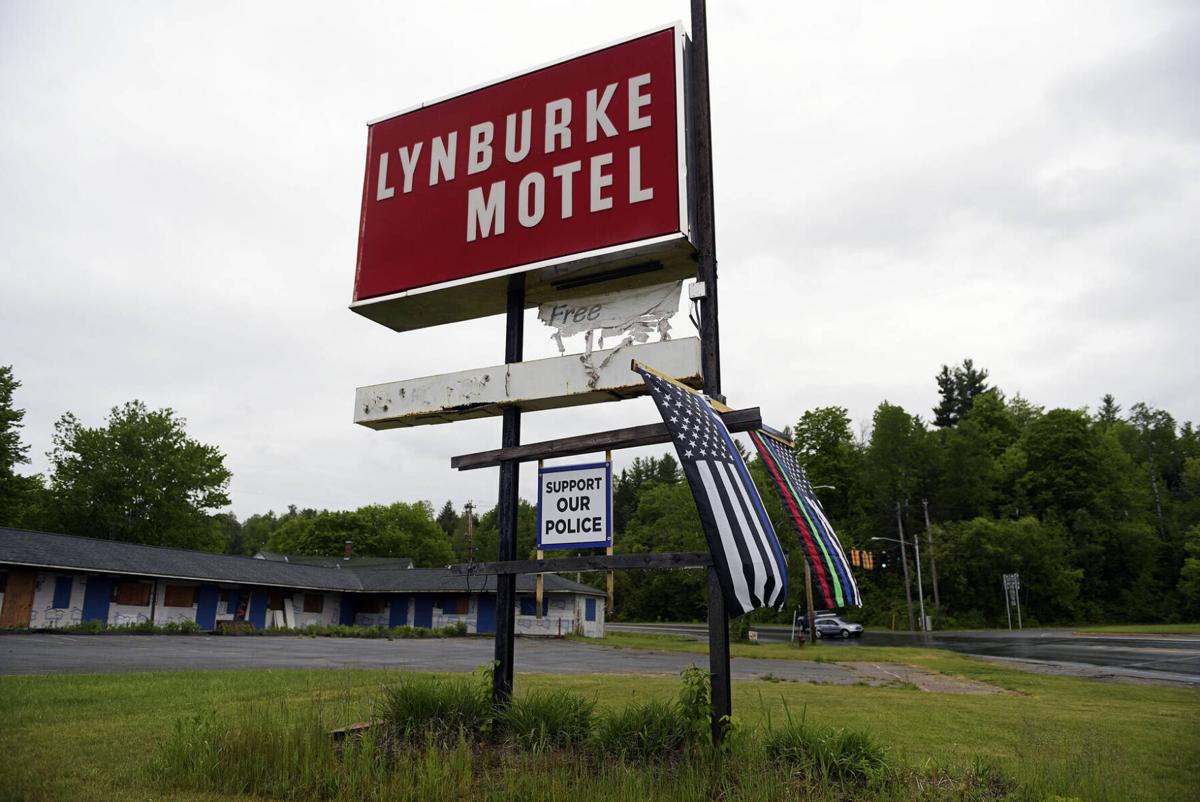 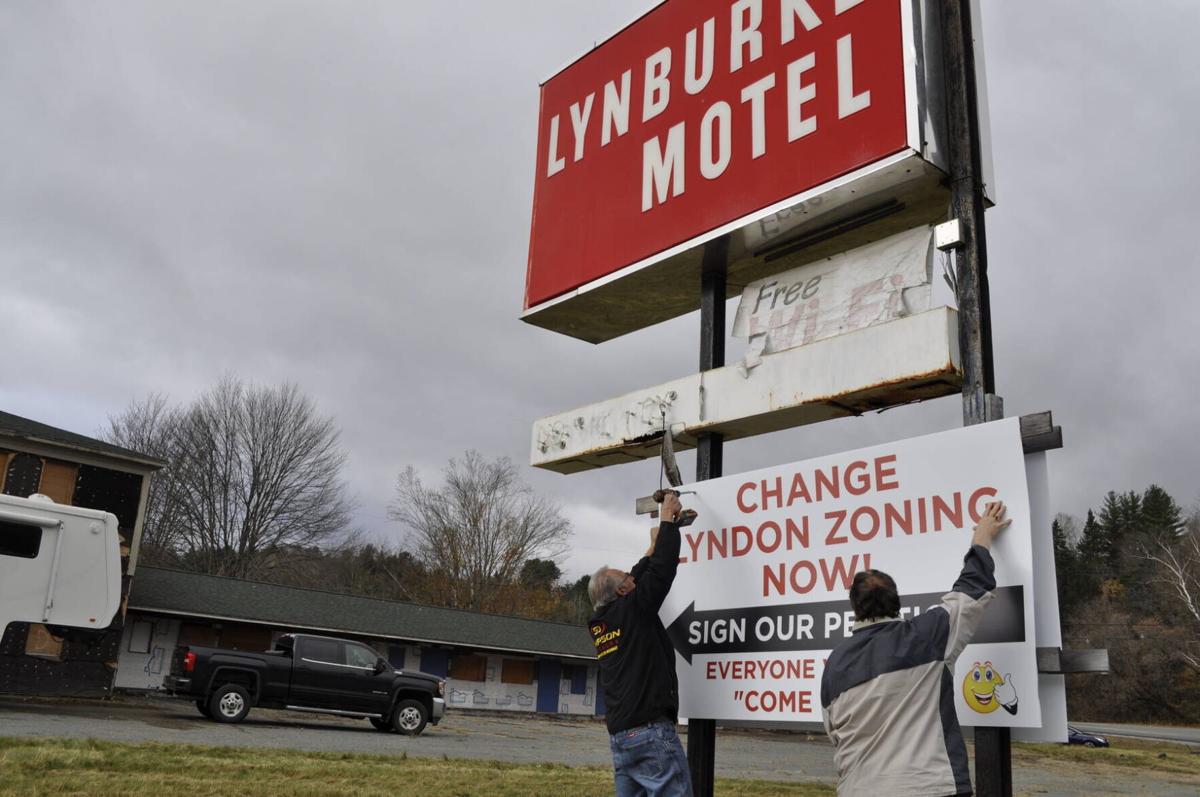 Joe Buzzi hangs up a sign in October 2019, inviting the public to come learn more about why he says he can’t develop the old Lynburke Motel into a new business. He spent the weekend collecting signatures on a petition to CHANGE LYNDON ZONING NOW. Buzzi, at left, is being helped by Larry Brooks of Lyndonville. (File Photo by Amy Ash Nixon)

Joe Buzzi hangs up a sign in October 2019, inviting the public to come learn more about why he says he can’t develop the old Lynburke Motel into a new business. He spent the weekend collecting signatures on a petition to CHANGE LYNDON ZONING NOW. Buzzi, at left, is being helped by Larry Brooks of Lyndonville. (File Photo by Amy Ash Nixon)

LYNDON — Joe Buzzi and Bill Walker were at odds.

Buzzi owns the former Lynburke Motel, a vacant building that has fallen into disrepair. Walker, a local resident, wants it cleaned up.

In this case, it didn’t.

Instead of trading insults and threats, Walker and Buzzi talked it out.

On Sept. 7, they sat down in Buzzi’s office for an hour-long conversation. It was civil and productive. They left on good terms and with a better understanding of each other.

In the process, they charted a path forward.

“Joe and I have our focus on the property and the problem, which is a complex problem,” Walker said. “We’re not arguing with each other.”

This summer Walker sounded the alarm on blighted properties.

For months, he has urged town officials to enforce laws on the books, in order to address what he calls “a growing problem” of vacant and deteriorated buildings in Lyndon.

He has frequently referred to the Lynburke (located at the intersection of Routes 5, 114 and 122) as the “poster child” for the problem, due to its prominent location and rapid decline.

Walker previously addressed Buzzi indirectly, through comments made at Development Review Board and Select Board meetings. Those comments were sometimes laced with frustration.

Then, Walker and Buzzi traded emails, which led to their meeting. While Walker’s position remains the same, he delivered his message in a softer tone on Monday.

He said that, through his discussion with Buzzi and research into the Lynburke, “I gained a whole lot more insight into the nature of the challenges for that property, and I was reminded of how helpful it can be to have people sit around a table and talk for a few minutes.”

Meanwhile, Buzzi admitted that the Lynburke has become an eyesore. He revealed plans to flatten the building after salvage operations are finished and permits are obtained. However, he said it was a slow, complicated and expensive process, and may take some time to complete.

“It was never my intent to leave [the Lynburke] there to start with, but things just kind of fell apart, and here we are today,” he said, adding that he’s as unhappy with the situation as the public. “It’s been a thorn in my side. But it’s my responsibility, and I’m taking it on.”

Spurred by Walker, the Select Board and Town Administrator Justin Smith have started to enforce the town’s Nuisance Structures ordinance, which applies to buildings that are falling apart, abandoned, uninhabitable, or have a negative impact on the surrounding community.

Letters will be sent out to seven property owners — including Buzzi — to begin the enforcement process.

As originally written, those letters would have triggered a building inspection and, potentially, fines up to $800 per day.

However, after hearing from Buzzi and Waker, the Select Board decided that the letters should propose a less severe first step: A conversation with the landowner.

Through that conversation, the landowner would write and submit a letter of intent. They would be held accountable to the conditions of that letter.

“I don’t like jumping to fines,” said Select Board Chair Christian Thompson.

Select Board member Nancy Blankenship agreed, adding, “Clear communication benefits everyone. It just clears up a lot of misunderstandings.”

Walker said fines may be necessary at some point, but said they should not be the first option. He advocated a “strong hand, soft glove” approach.

“We’re being polite, we’re being respectful, we’re giving people time, but it doesn’t mean that there’s just a weak hand in there that’s not going to do anything,” he said. “We should be flexible and give people leeway. This is not a hardball kind of deal. But we’ve got to do something.”

“I think something definitely has to be done, there’s no doubt about that,” he said, adding, “There’s no easy way and not everybody’s going to be happy.”

As the discussion ended, Walker thanked Buzzi for his efforts. He hoped the Lynburke situation, and the way it was handled, would serve as a precedent for other landowners in similar straits going forward.

“This is a great example of exactly what we’re trying to do across the board in town,” Walker said. “Nobody is happy when they’re in a tangle like this, but opening it up and getting people talking makes a big difference.”

Great approach! Thanks Bill and Joe for sitting down and getting the conversation going!