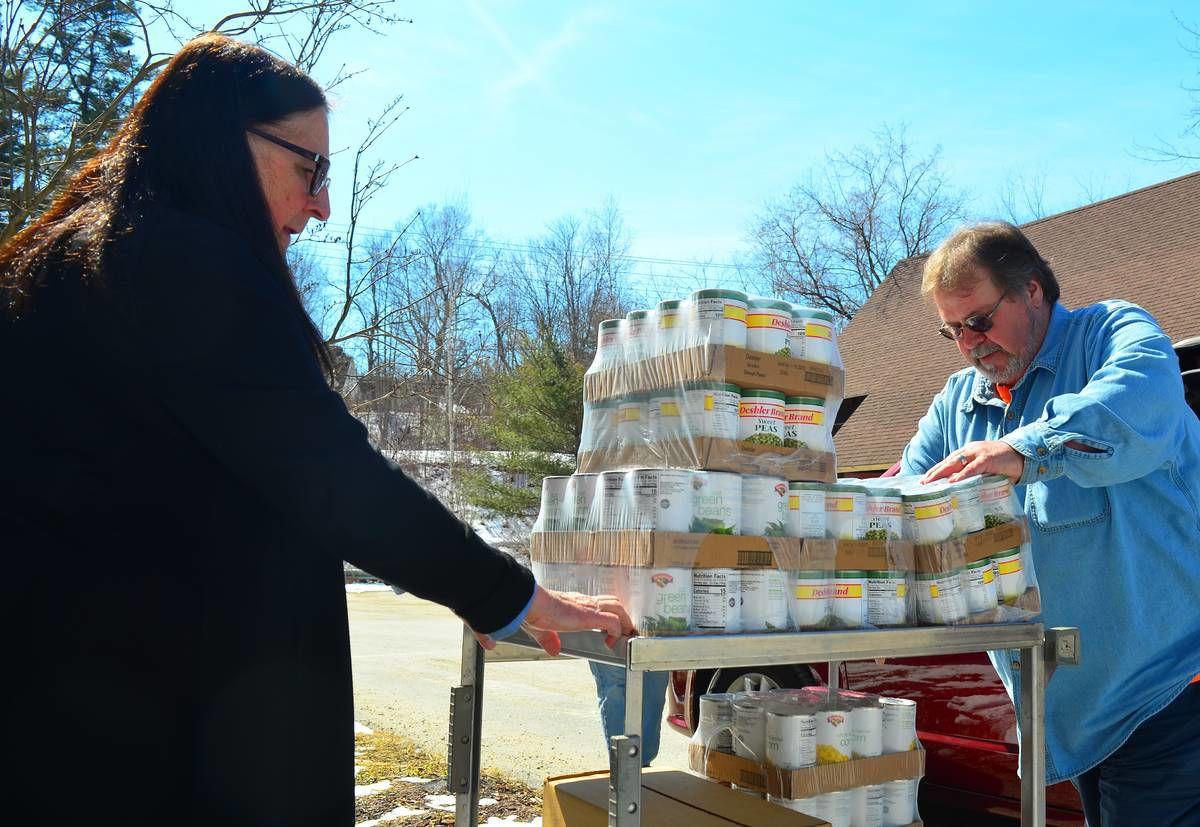 On Thursday at the Littleton Area Senior Center, Judy Ash, left, home-delivered meals coordinator for the center's Meals on Wheels program, and Andy Comeau, a driver for the program, receive canned goods from the New Hampshire Food Bank that were delivered to area residents in need. (Photo by Robert Blechl) 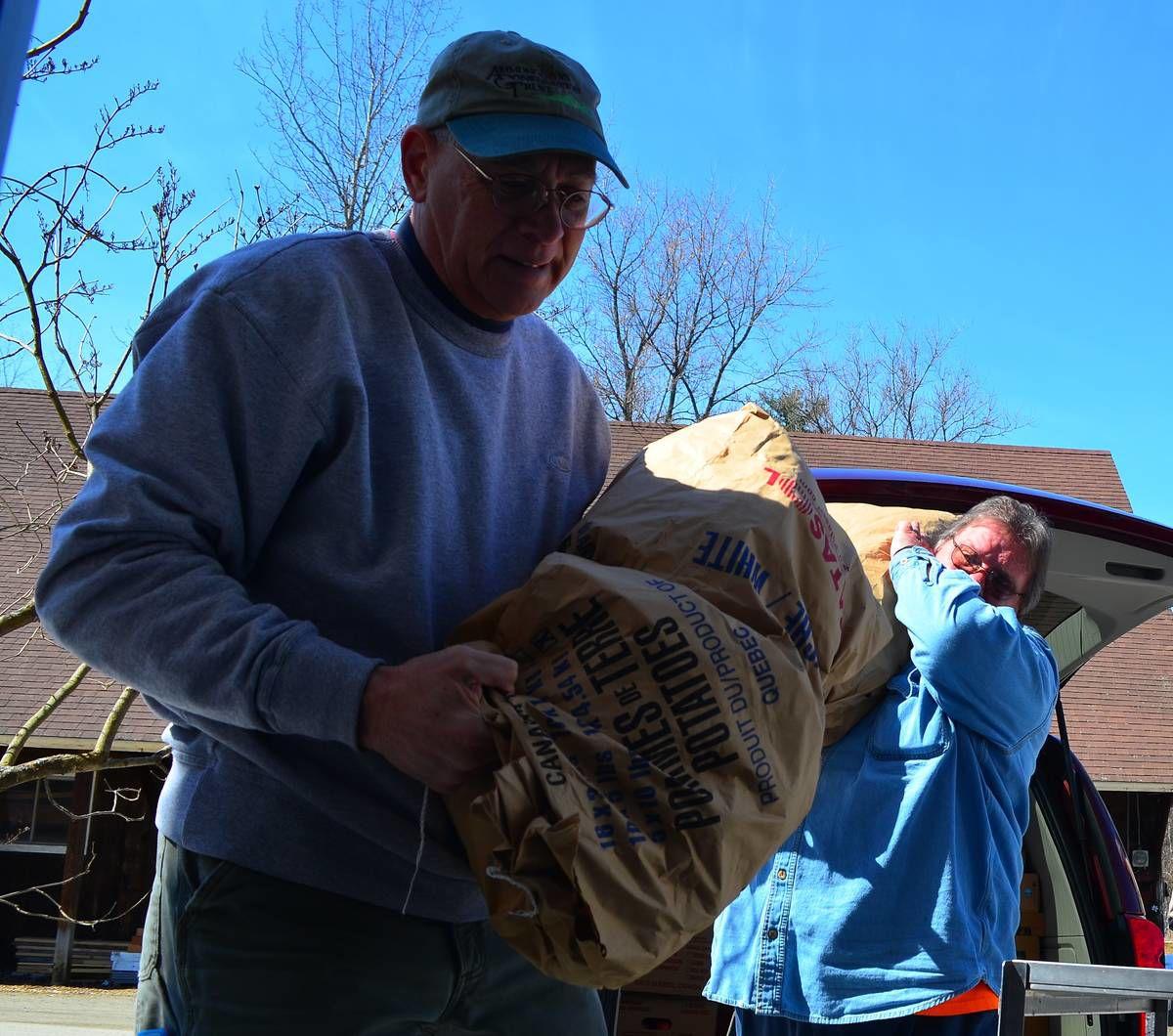 On Thursday at the Littleton Area Senior Center, Ray Bowler, left, and Andy Comeau, drivers for the center's Meals on Wheels Program, take a delivery of food from the New Hampshire Food Bank that was promptly delivered to area residents in need. (Photo by Robert Blechl)

On Thursday at the Littleton Area Senior Center, Judy Ash, left, home-delivered meals coordinator for the center's Meals on Wheels program, and Andy Comeau, a driver for the program, receive canned goods from the New Hampshire Food Bank that were delivered to area residents in need. (Photo by Robert Blechl)

On Thursday at the Littleton Area Senior Center, Ray Bowler, left, and Andy Comeau, drivers for the center's Meals on Wheels Program, take a delivery of food from the New Hampshire Food Bank that was promptly delivered to area residents in need. (Photo by Robert Blechl)

LITTLETON — Even in the best of times, sustaining the Meals on Wheels program at the Littleton Area Senior Center (LASC), which for decades has provided daily hot meals to Littleton area seniors, has been a challenge.

Increasing need has run up against a finite budget unable to increase with it.

Today, though, as seniors self-isolate during the COVID-19 shutdown and with no certainty yet as to when it might end, and when volunteers because of virus precautions are unable in the same numbers to prepare food for deliveries as they had been, an already strained program is experiencing even greater strain as it strives to fulfill its mission.

Under normal conditions, daily deliveries out of Littleton would serve an average of 185 people with a hot meal each day.

Now, deliveries have been reduced to two days a week and have swapped hot meals with frozen meals for a current total of about 210 people, with an additional one to two new people added each day, she said.

“We’re trying to not only keep up with the situation, but get ahead of the situation and prepare for what might happen next week,” said Vasconcelos. “It changes hourly.”

The need ticked up after the senior center suspended its congregate on-site meals, typically the daily luncheon, and offered Meals on Wheels instead, she said

As virus precautions put Meals on Wheels into uncharted territory, more donations are being sought as well as a new plan put forth this week to find satellite locations to store frozen food in the event such locations are needed.

Another challenge has been utilizing volunteers, which outnumber LASC staff by about 10 to 1.

Because of the risk of infection, volunteers are currently not allowed into the senior center, on Riverglen Lane, though they can still help outside the building and pack vehicles with food brought to them by staff members.

Reducing interaction between deliverers and meal recipients has also become the new normal, which makes it more difficult to check in and see everyone every day in person to determine if they are well, said Vasconcelos.

“Half the routes are now being done on Tuesdays and half on Thursdays,” said Vasconcelos. “We’ve just added two routes, and will need more people to deliver as well.”

Under current operations, each recipient is delivered a week’s worth of meals by one or two volunteers on each route.

Because the changes also require more space for meal deliveries, more GCSCC buses are being used for deliveries, with buses making up most the vehicles on Thursday’s delivery.

Meal production has ramped up significantly - during the weekend, chef Michael Swinyer cooked more than 700 meals, which were put on a tray, sealed and frozen for this week’s deliveries.

As for the need to find satellite locations and additional freezer space to store food, it would only take one person testing positive with COVID-19 to shut down a location that currently prepares or stores food, she said.

The GCSCC has eight senior centers across Grafton County that provide Meals on Wheels.

About about one-third, or $1.2 million, of the total $3.6 million GCSCC annual budget goes toward Meals on Wheels at the eight locations and helps pay for food supplies and staff members.

As for total Meals on Wheels program funding, the New Hampshire Department of Health and Human Services provides slightly more than half by providing money for transportation and nutrition, for congregate meals at the senior center itself and for home-delivered meals.

That percentage, though, even before the coronavirus, doesn’t have the same impact it had in years past because of increasing need.

The balance of the Meals on Wheels budget is made up by private donations, recipient donations, funding from the towns served, grant funding for which the GCSCC is continually applying, and fund-raisers - though the fund-raisers are on hold because of the virus.

While recipients of meals are not required to pay, a $3 donation is suggested, though that donation on average ends up being less than $1.

Some people see Grafton County in the GCSCC name and might think the county is funding Meals on Wheels, but that is not the case, said Vasconcelos.

Donations to Meals on Wheels can be made online at the GCSCC web site or by sending a check to the senior center or the GCSCC headquarters in Lebanon, and also by giving shelf-stable food.

In addition to the meals, the program has also been delivering pet food to those who need it as well as trying to find a steady supply of toilet paper, said Bob Muh, a Meals on Wheels and LASC volunteer from Littleton.

“We are being open to whatever their needs are,” said Muh.

On Thursday morning, meals cooked at the senior center by Swinyer were packaged and sent on their routes.

Early that afternoon, a shipment of canned goods, water and food packages arrived that was donated through a food drive by the New Hampshire Food Bank, one several entities donating, with others that include the Littleton Area Chamber of Commerce as well as individuals.

“It goes out as fast as we get it,” said LASC Executive Director Robin Kristoff.

Here you'll find our collection of Caledonian-Record reports on the coronavirus outbreak and local response, from the beginning.