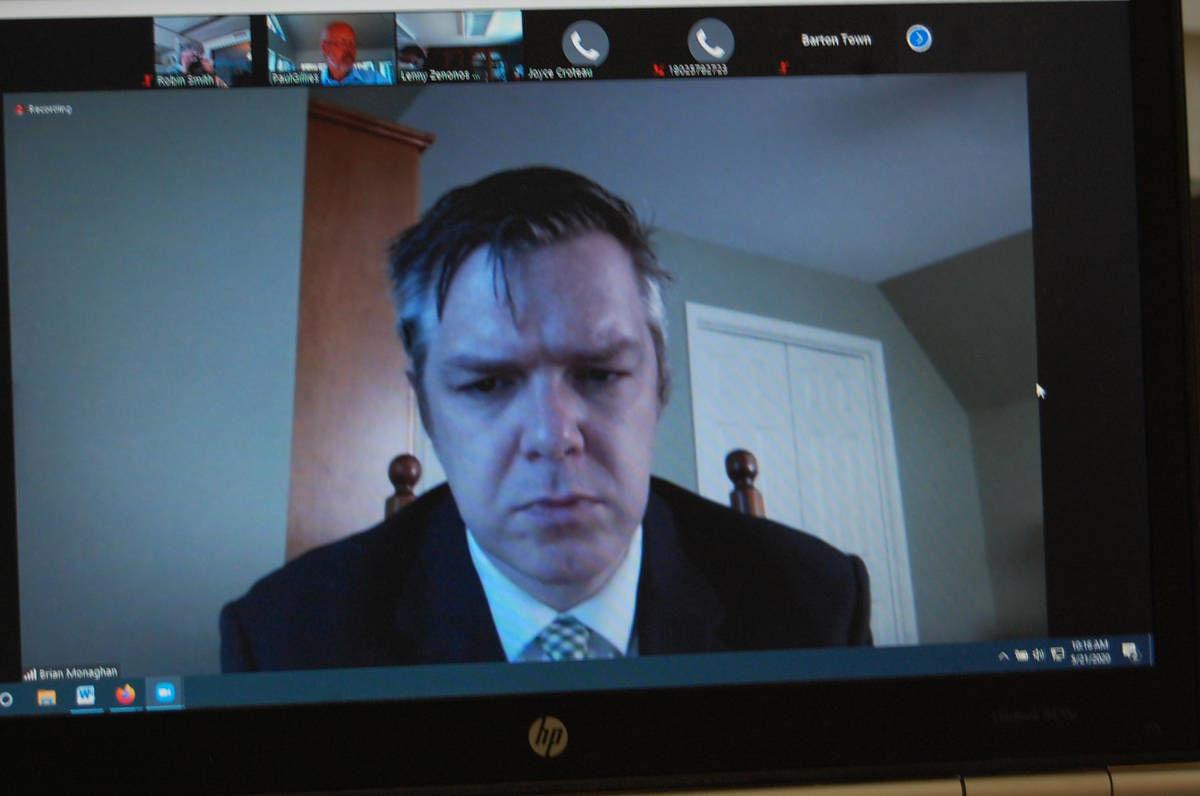 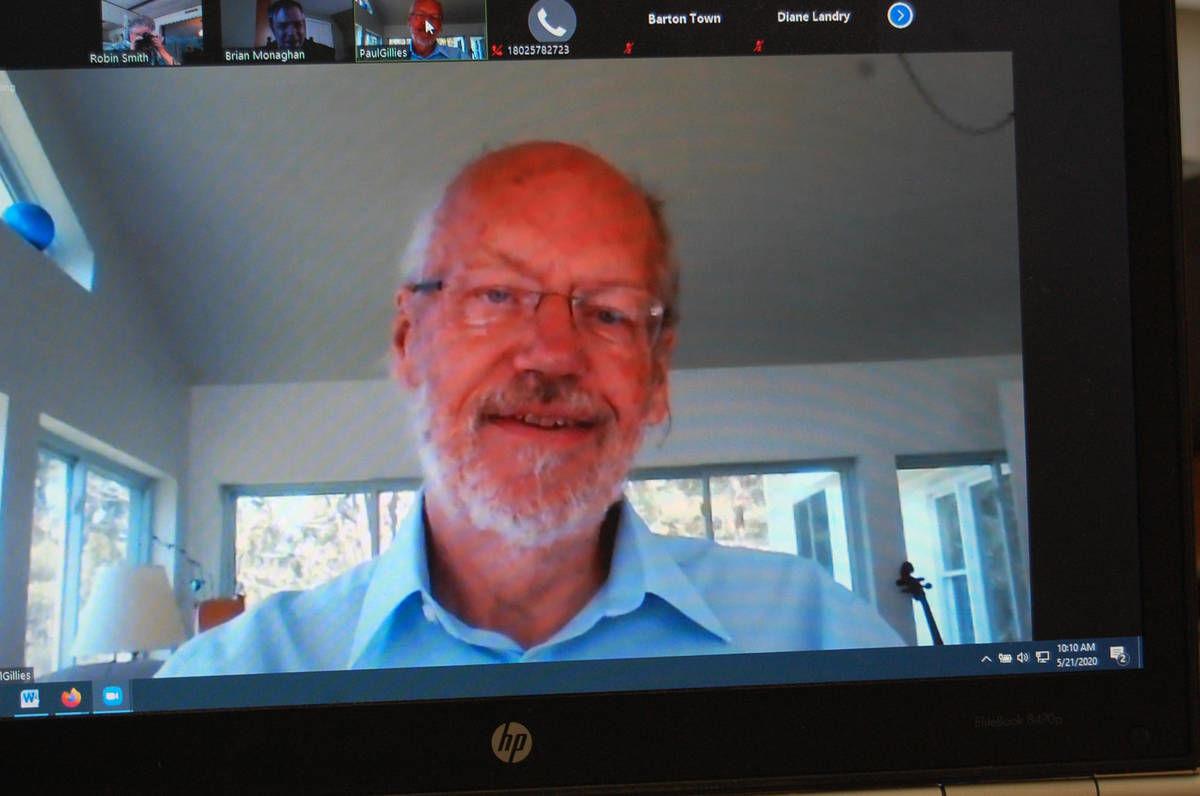 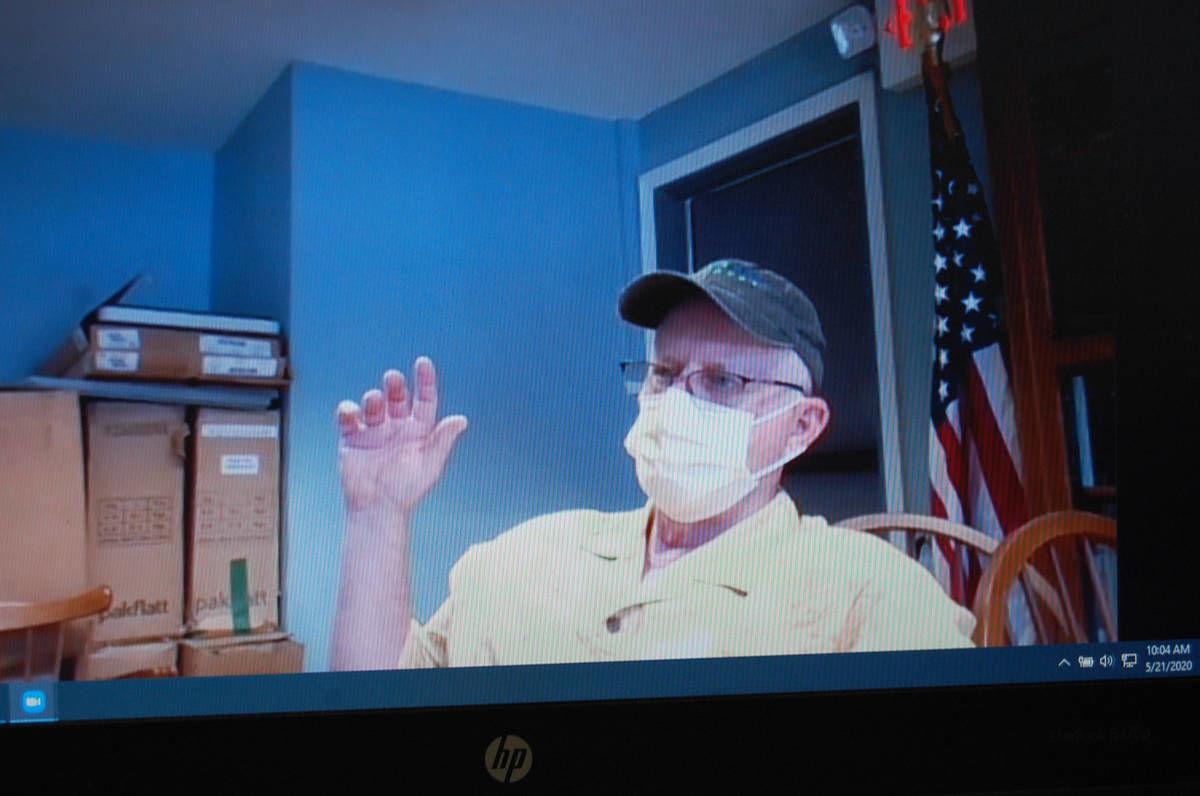 Barton Selectman Ken Mitchell-Eby swears to tell the truth at the beginning of a formal pre-termination hearing Thursday morning held by the Barton Select Board over Zoning Administrator Joyce Croteau. The hearing was in person and by Zoom. Croteau testified by teleconference call. (Photo by Robin Smith)

Barton Selectman Ken Mitchell-Eby swears to tell the truth at the beginning of a formal pre-termination hearing Thursday morning held by the Barton Select Board over Zoning Administrator Joyce Croteau. The hearing was in person and by Zoom. Croteau testified by teleconference call. (Photo by Robin Smith)

She also said that two selectmen, Lenny Zenonos and Ken Mitchell-Eby, had targeted her over the past two years, including before they were elected or appointed to the board.

Croteau spoke at a pre-termination hearing by Zoom, teleconference and in person by the select board. Mitchell-Eby testified about evidence of what he called insubordination by Croteau for not following directions of the board in recent months. The hearing was public at Croteau’s request.

The board put Croteau on paid administrative leave after cutting her wages from $20 an hour to $13.58, increasing and changing her work hours and requiring that she respond to public requests for information as zoning administrator within 48 hours. They hired former zoning administrator Brent Shafer to do the job until the board decided whether to fire Croteau.

The board called the hearing after Mitchell-Eby presented his arguments that Croteau was not responding to select board directives.

At the hearing Thursday, Paul Gillies represented Croteau, and Brian Monaghan represented the select board. Both sides filed briefs and asked their clients to answer questions and to give summaries of the briefs.

The other two selectmen, Zenonos and newly appointed Selectman Jeff Cota, were acting as a quasi-judicial board to hear the case and decide whether to fire Croteau. They listened and only spoke briefly.

They will accept briefs and recommendations on how to proceed from each attorney within a week. Zenonos said they will issue a written decision after that.

Monaghan questioned Mitchell-Eby about his concerns about Croteau’s work and how she responded to requests for information from the board.

When Croteau responded by challenged the legality of how the board warned the meeting when she was put on paid leave, Mitchell-Eby said “I feel it is blatantly insubordinate throughout where she directs the board, she tries to offer legal advice to the board, refuses to perform or do actions she was directed to by the board.”

Croteau said that she had no complaints from members of the Development Review Board and the Planning Commission in Barton.

She said it was like he wanted a transcript.

She swore that she did not claim to have worked longer than she actually did.

Gillies presented the select board with copies of time sheets of other employees, which he said showed they were not required to go into as much detail as Croteau is.

“I think it’s patently obvious that the select board is treating the zoning administrator differently when you compare those documents,” he said.

Among the issues raised were Croteau’s non-response to a request by the town clerk Kristin Atwood.

Croteau said that she did not answer to the town clerk.

Monaghan said that issues of public meeting law were not relevant to the hearing, saying that Gillies and Croteau could pursue complaints about that in another venue.

Other issues addressed at the two-hour hearing included whether Croteau knowingly worked more than the three hours allotted her each week.

Croteau said she was told she could work longer if it was an urgent issue for an applicant.

And Gillies sought to show that Mitchell-Eby had a bias against Croteau even before he joined the select board. She is the wife of former Selectman Bob Croteau, who opted not to run again in March. Mitchell-Eby was a critic of both Croteaus as a resident.