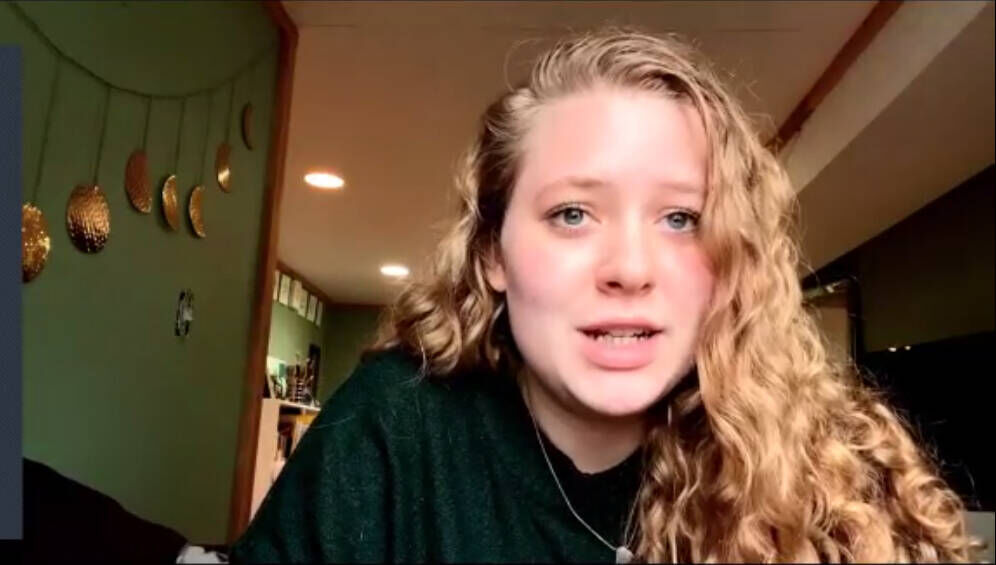 This past spring, the Danville school board held two multi-hour forums on their school's longtime nickname - the Indians - before adopting a policy that effectively did away with the name and set in place a process to choose a new mascot. Then-senior Autumn Larocque, pictured, gave a 25-minute video presentation on the mascot's controversial history to the school board on March 3. 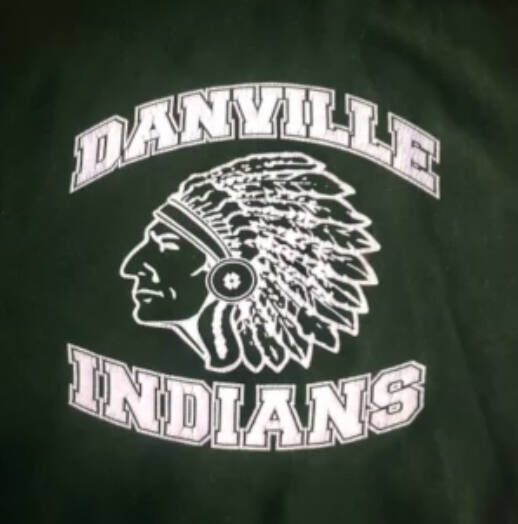 A past Danville School logo, shown during senior Autumn Larocque's 25-minute presentation to the school board on March 3. Larocque pointed out that this pictorial representation features a headdress not used by indigenous people in the Northeast. This style headdress is used in the Great Plains region.

This past spring, the Danville school board held two multi-hour forums on their school's longtime nickname - the Indians - before adopting a policy that effectively did away with the name and set in place a process to choose a new mascot. Then-senior Autumn Larocque, pictured, gave a 25-minute video presentation on the mascot's controversial history to the school board on March 3.

A past Danville School logo, shown during senior Autumn Larocque's 25-minute presentation to the school board on March 3. Larocque pointed out that this pictorial representation features a headdress not used by indigenous people in the Northeast. This style headdress is used in the Great Plains region.

Inside official voting booths used by the town’s registered voters on Town Meeting Day each year, students will cast their ballot for a new school mascot.

Earlier this month, a committee of students, parents, community members and staff narrowed 34 submissions from the wider community down to a final four: Trailblazers, Bears, Mountaineers or Bobcats.

Those four choices and the procedure for choosing a finalist was announced in a newsletter written by the mascot committee and sent to the school community late Monday evening.

Danville Middle and High School Principal David Schilling said Tuesday afternoon that the committee came up with the idea of one vote per student.

“We discussed adult participation [in the voting process], he said. “There were several students on the committee and everybody really felt that it that the students are the ones who are going to be living with… and that it really should be a student decision.”

“The community was invited to participate in submitting names and ideas and serving on the committee, and committee members felt that those were the appropriate places for those adults,” Schilling said.

“I [personally] thought we would go with an adult vote and a student vote,” he said. “But everybody else felt very strongly that students should have the final say.”

Schilling noted that everybody who wanted to be part of the committee was invited and allowed to participate.

Despite community controversy, the Danville School board did away with the school’s former nickname — the Indians — earlier this year after multiple hours of testimony from students, teachers, alumni and community members.

On Dec. 3, the Danville student council will be helping to set up, decorate and manage the election process, and voting will take place in the school lobby through a ranked-choice process.

“Students will identify themselves on a ‘voter registration’ list (our enrollment records), and then will vote in-person,” reads the newsletter. “Before the vote, we’ll share the above list of names with classes, and students will have the opportunity to complete a practice ballot, using favorite pizza toppings, to make sure they understand the process.”

With ranked-choice voting, if a name gets fifty percent of the vote plus one after all the first-choice votes are counted, then the election is over and that candidate wins.

If that does not happen, then the option with the lowest number of first-place votes is eliminated and that candidate’s voters’ second choices get redistributed as votes for other candidates. This reallocation of votes goes on until someone reaches 50 percent plus one.

“The committee thought this would be a great opportunity to teach a little bit about right to choice voting and how an election works,” Schilling said.

Schilling, who served as a chair of the committee along with Danville Elementary Principal Sarah Welch, said that the committee meeting a couple of weeks ago was a very short and smooth process.

“Our hesitation [on the process] was just everything else that is involved with running a school in a pandemic,” he said. “The committee members worked really well together. We didn’t think we would just have one meeting, but at the end of it we came up with four great selections and moved forward.”

The committee worked through the 34 suggestions submitted by community members and evaluated them based on criteria approved by the school board in a policy adopted earlier this year. Schilling noted that many of the suggestions did not have enough of a connection to Danville.

For example, more than a few suggested the mascot of “Grizzlies,” however, grizzly bears do not live in the Danville area.

The criteria include that a mascot should be: unifying and broadly relevant for all current Danville students and staff and the larger Danville community; represent positive qualities around which people can rally; have the potential to translate in a visually pleasing manner; and be something exciting and fun, that “a wide variety of community members will enjoy being loud and proud about.”

The Danville Indians are no more.