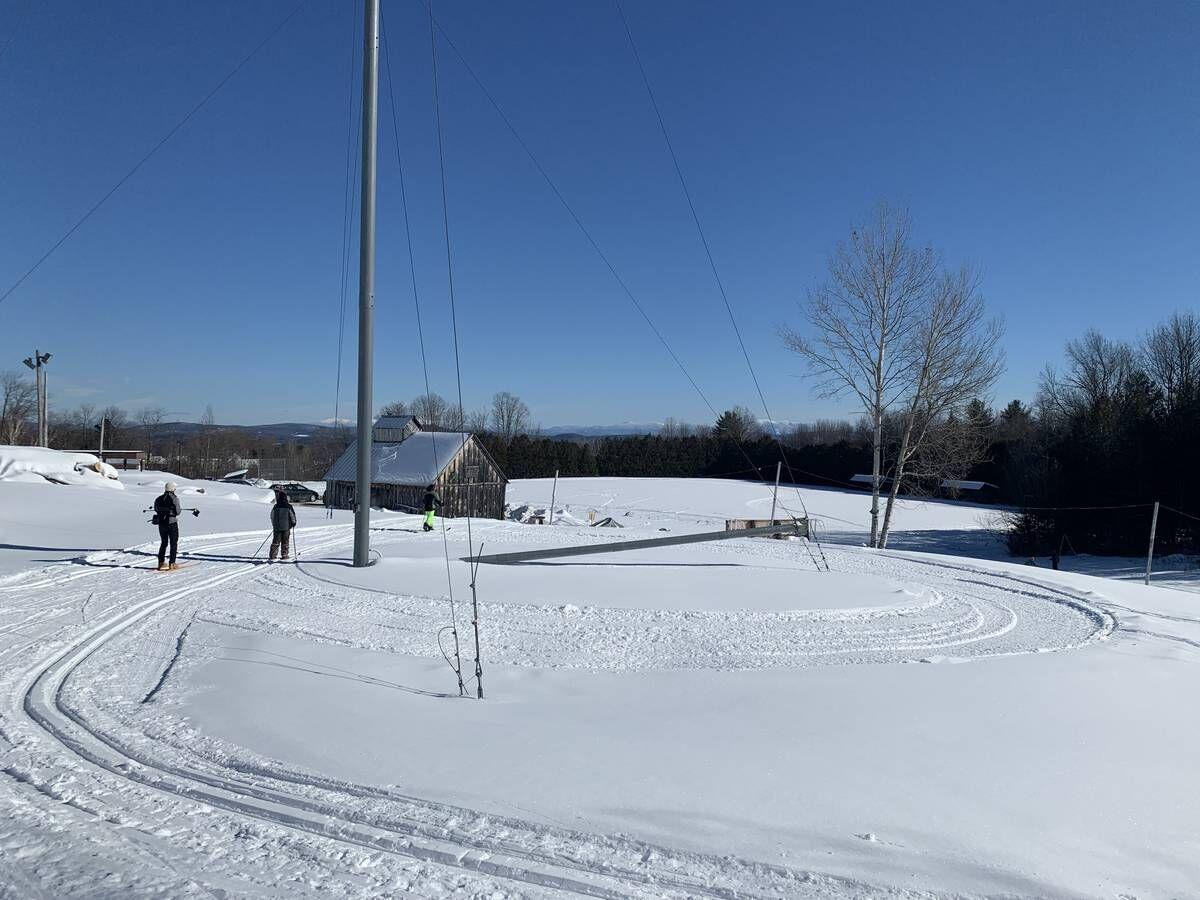 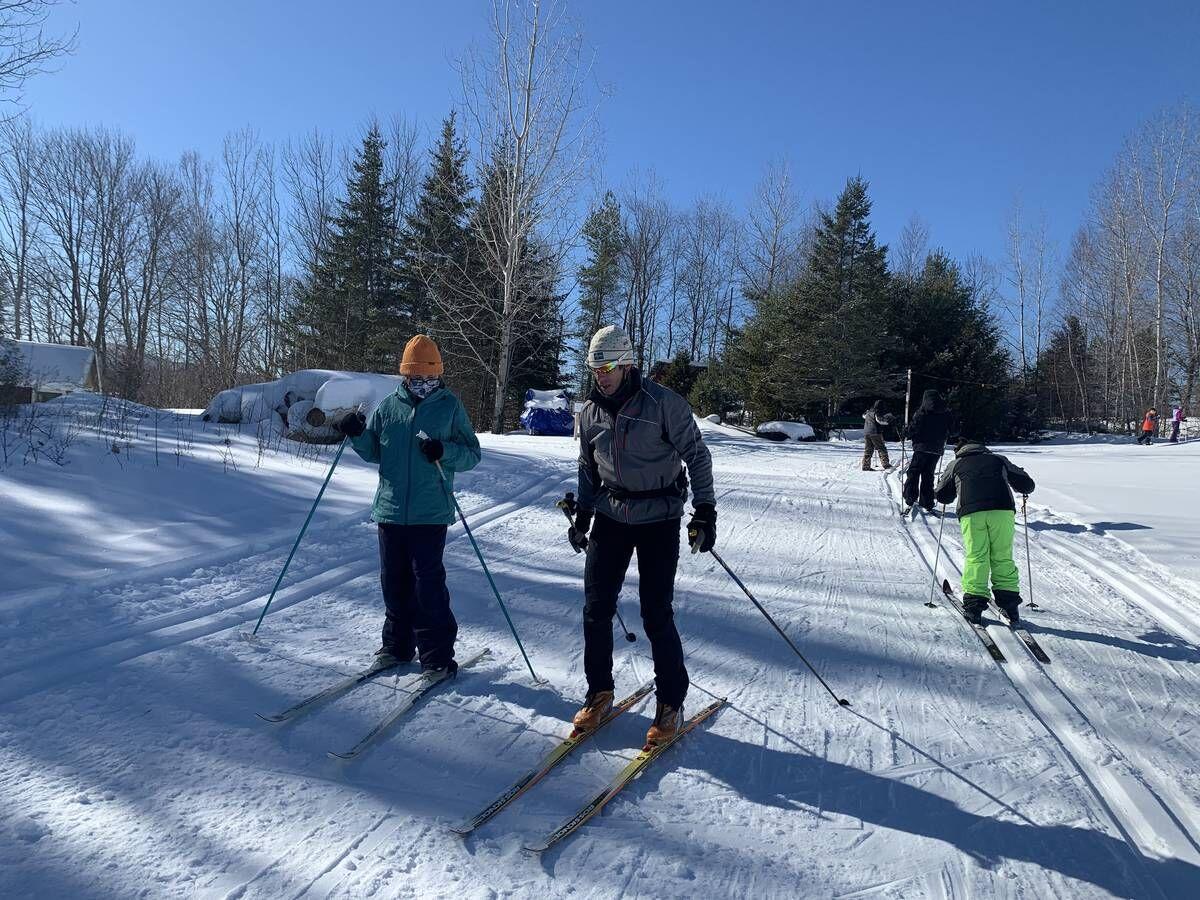 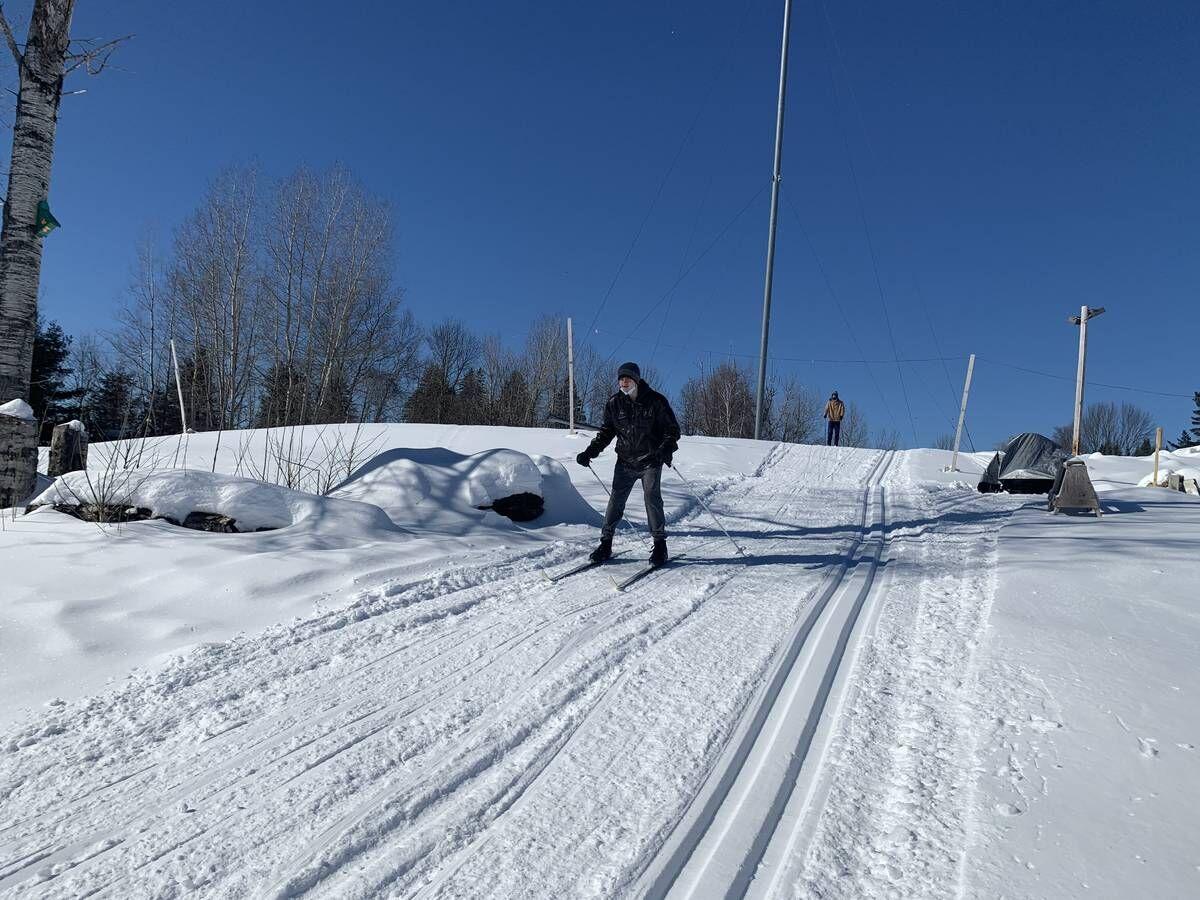 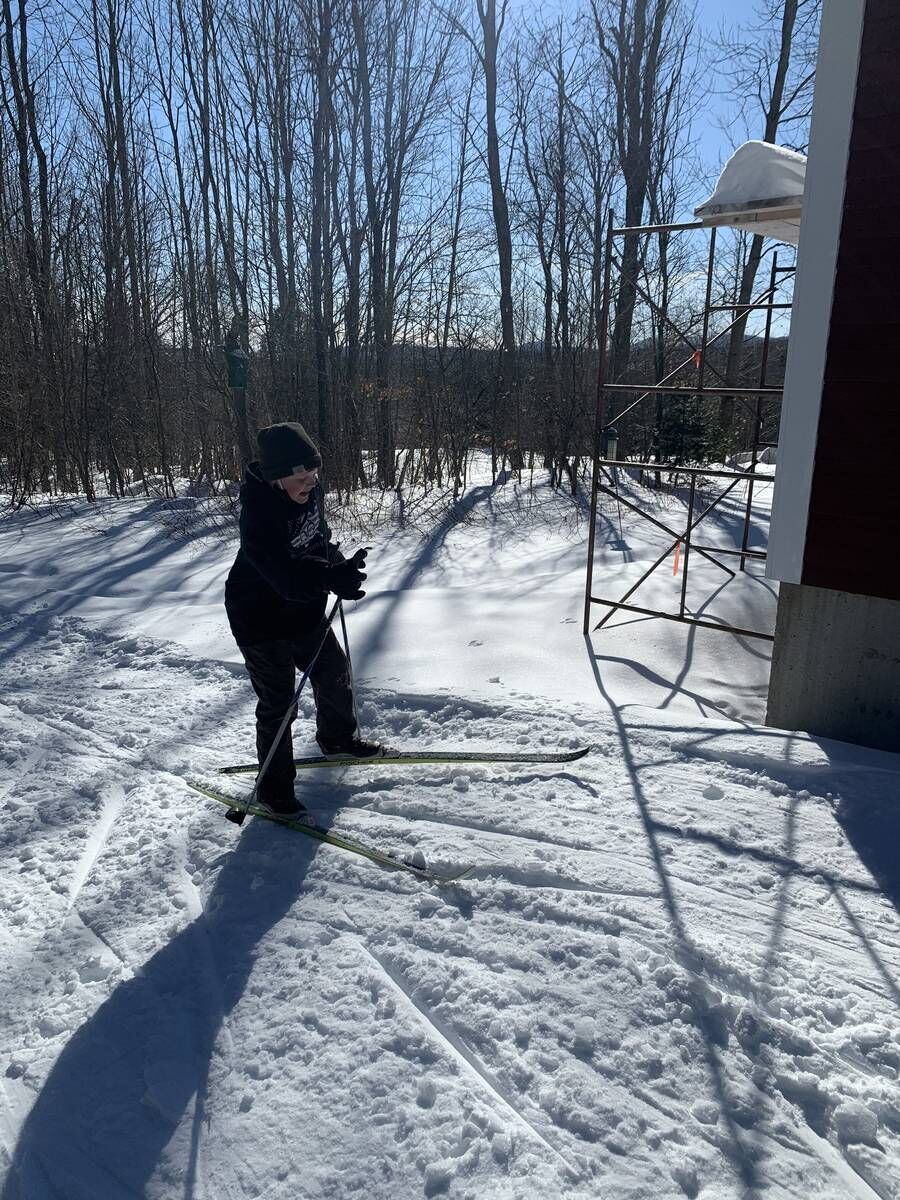 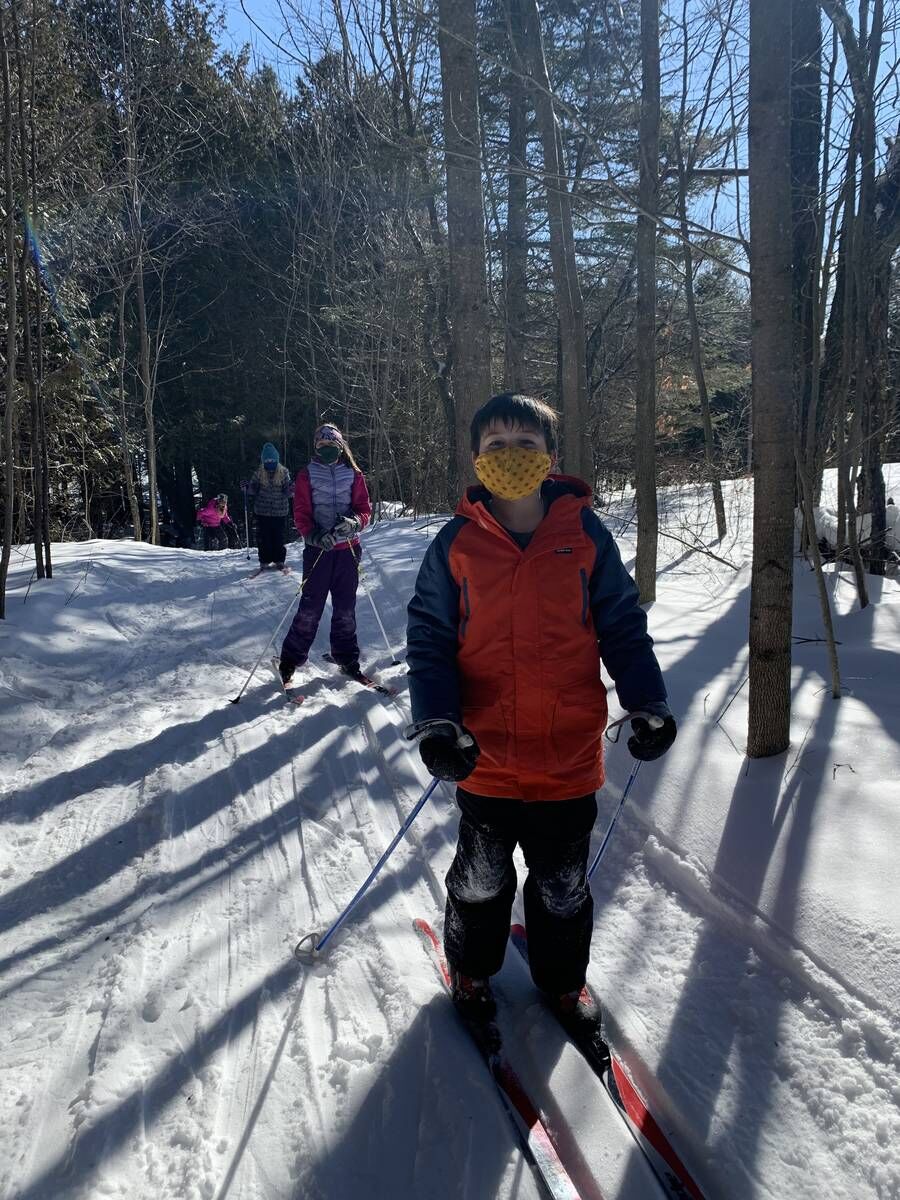 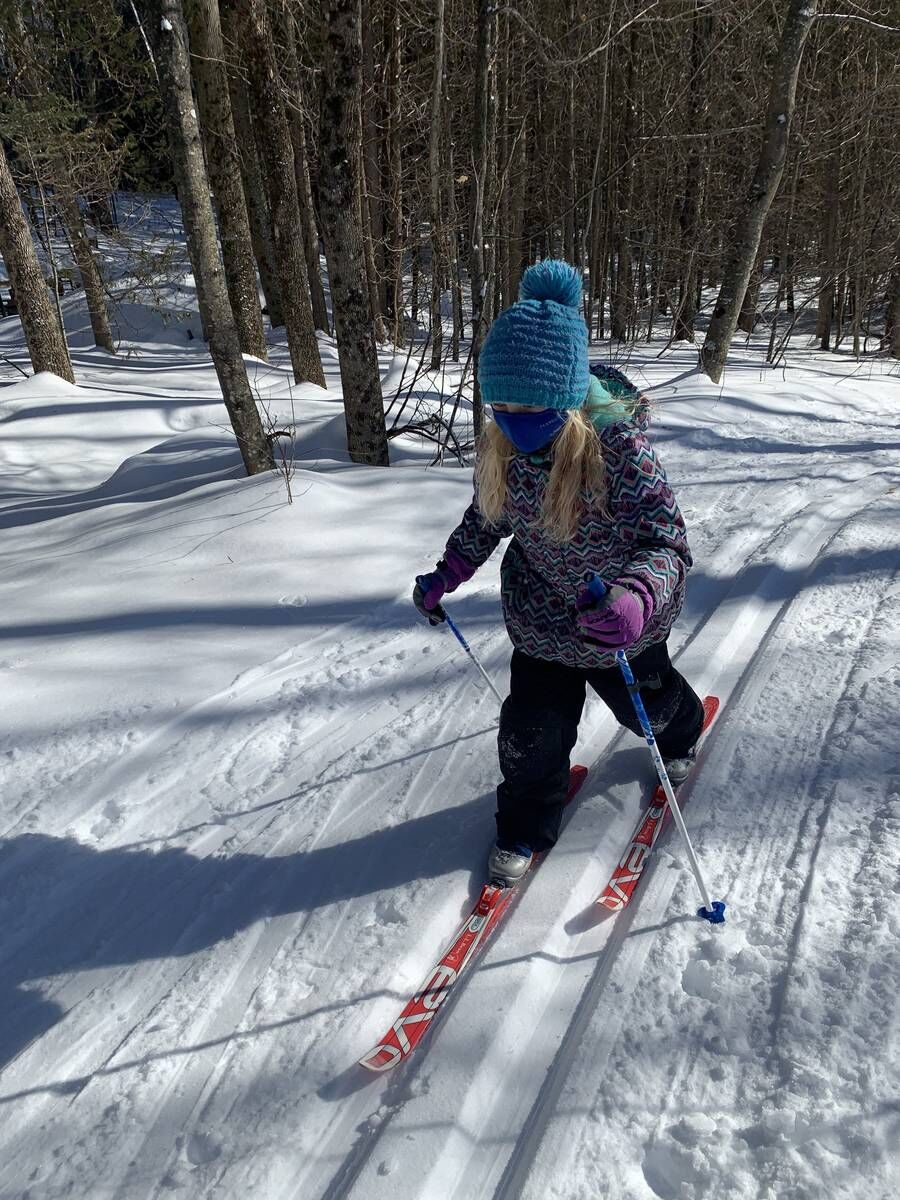 DANVILLE — Being a student right now is really hard.

You wear a mask all the time, you can’t hang out with or hug your friends, sometimes you have to spend all day learning remotely, and there is no clear end in sight.

But a relatively new club at Danville School gives kids a chance to get outside, meet students of all ages, and try a new activity.

The school’s Nordic (cross-country) ski club, in its second “official” year, is open to students all the way from Preschool to 12th grade.

Participants ski three days a week for an hour to an hour and a half at a time on the school’s groomed trails, as well as the neighboring Lamoille Valley Rail Trail (LVRT). Skiers explore at their own speed, covering between 1km to 5km-plus an outing.

Design and Technology Teacher Maxfield English is the driving force behind the club and groomed trails.

“This provides an opportunity for students to pick up a sport or activity that they could potentially do for the rest of their life fairly inexpensively and almost anywhere,” he said. “You can do this out your backdoor most places.”

English, a big advocate for fitness and athleticism, says that despite the ease of access many kids may not have the ability to do this anywhere else but school.

“When it starts to get cold and the snow flies, a lot of people sort of lockdown in the house,” he said. “I’ve had a lot of students that tell me that they normally would not be outside, but this gives a real good incentive and they forget about the cold because they’re having so much fun.”

English started a pilot program a handful of years ago.

“We bought a really cheap, unreliable snowmobile the first year and I had a student weld up a groomer as a senior project,” said English. “It’s kind of steadily grown from there.”

The school is gaining skis from donations and used-ski sales whenever they can.

“We’ve cobbled together enough equipment for everyone that needs it, but sizes are not always ideal,” he said. “Some were donated and we have purchased some used stuff, but our gear never has a predictable long-life expectancy.”

Nordic skiing is the only club or sport offered to all students in one group, which Athletic Director Randy Rathburn says is “quite an undertaking.”

“The program is a microcosm of our PK-12 school — on any given day, we might have a kindergarten student skiing alongside high school juniors,” he said. “There’s a huge benefit from the cross-age collaboration and mentorship.”

“Maxfield has built this program up from scratch and has done a phenomenal job of acquiring and building resources to make it successful,” Schilling continued.

Rathburn thinks the club is especially important this year, due to COVID-19.

“Some families and children maybe not being as comfortable doing an indoor sport such as basketball; this is giving them an outdoor outlet,” he said.

Earlier this winter, when English took the school’s junky old machine out to groom, it died right in the field.

“I knew people were asking when the program would start,” recounted Rathburn. “We were at kind of loss of what to do … are we going to take this older model snow machine to get fixed, knowing that it was probably going to get a thousand to two thousand dollars of work? And it obviously would take some time. We had just gotten a snowstorm and we really had people that wanted to get out there, including community members.”

English “tried all the usual suspects” and realized a motor rebuild was needed.

“I had some students in my tech class that wanted to do it,” he said. “We bought the parts, pulled the whole thing apart, and realized it was really the entire motor and decided to abandon ship.”

Once Rathburn caught wind of the troubles, he turned to his wife Jeniane, who grew up in Danville, for advice. She immediately thought of Board Chair Bruce Melendy.

So Rathburn made a phone call.

“I talked to Bruce at about 9:30 one morning and he immediately said ‘absolutely, I’ll bring a machine down by tomorrow morning,’” said Rathburn.

Melendy, who enjoys going out with his wife and grandkids on his four snowmobiles, says he doesn’t get out as much as he used to. The snowmobile he has lent to the school indefinitely was “just sitting in a trailer.”

“My intent was maybe they’d have it for a week or two,” said Melendy. “But I got to thinking about it and I’m like ‘well, I might as well let them use it for the whole year; I don’t need it.’”

So far, Melendy has borrowed the machine just one time, over a weekend for a grandson to use.

“I live close enough to the school so if I actually needed it I could go grab it,” he said. “I’m happy to let them use it for this year and we’ll see what next year brings.”

Melendy says this highlights what is great about living in a small community.

“I didn’t do anything any different than a lot of other people have done in this community,” he said. “When somebody needs something, people step up.”

The donation has been a “lifesaver” for the Danville Nordic ski club, which would not have had the funds to repair the broken snowmobile.

“And if we can’t groom trails here for my beginner skiers, it’s just impossible,” said English. “You got little kids with short legs trying to break trail through snow and it just doesn’t work.”

Melendy’s ‘99 Polaris now pulls the groomer made years ago by a student out of fence parts and a culvert.

The school grooms about 2km of trails. English, who also coaches the school’s cross-country running team, has improved and modified them over the years.

Not only do English’s efforts benefit students and staff (Principal Schilling is known to join the club when he can avoid afternoon meetings), but the wider community is allowed to use the school’s groomed trails as well.

English is really proud of his students.

“I feel really fortunate to work with such a motivated and great group of kids,” said English. “They are willing to go outside in the cold and learn something new.”

“Some of these kids have never been on skis before in their life … they struggle a little in the beginning, but they pick it up so quick,” he continued. “I don’t have any kids that showed up and then never came back”