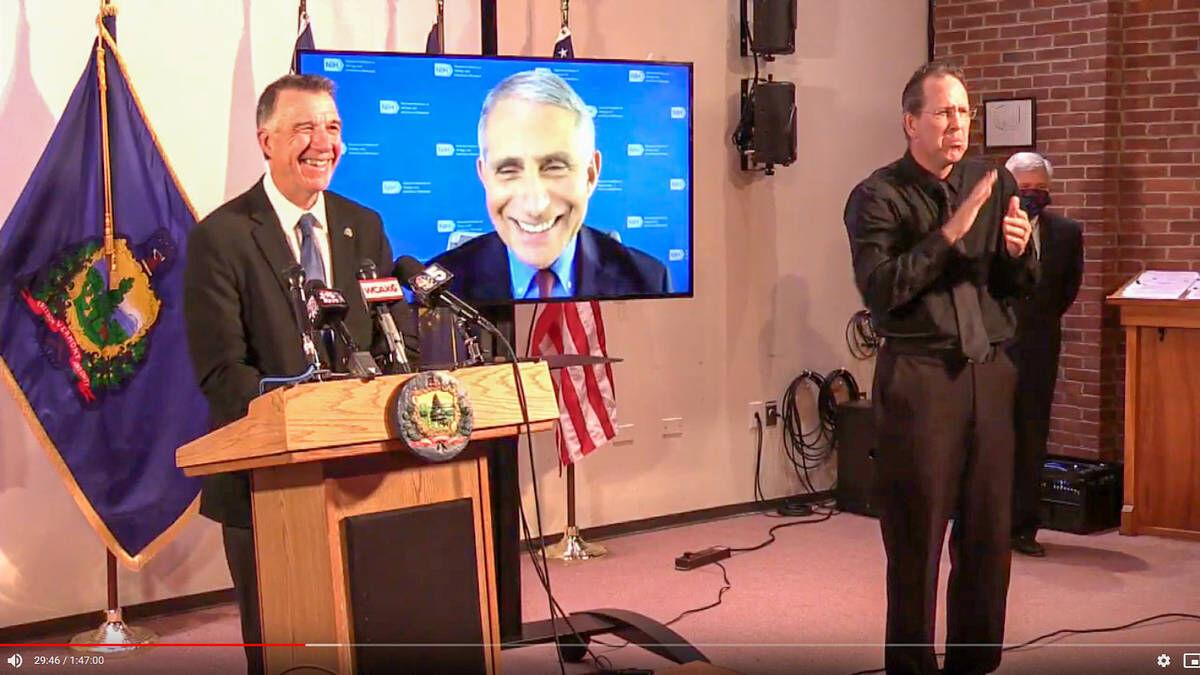 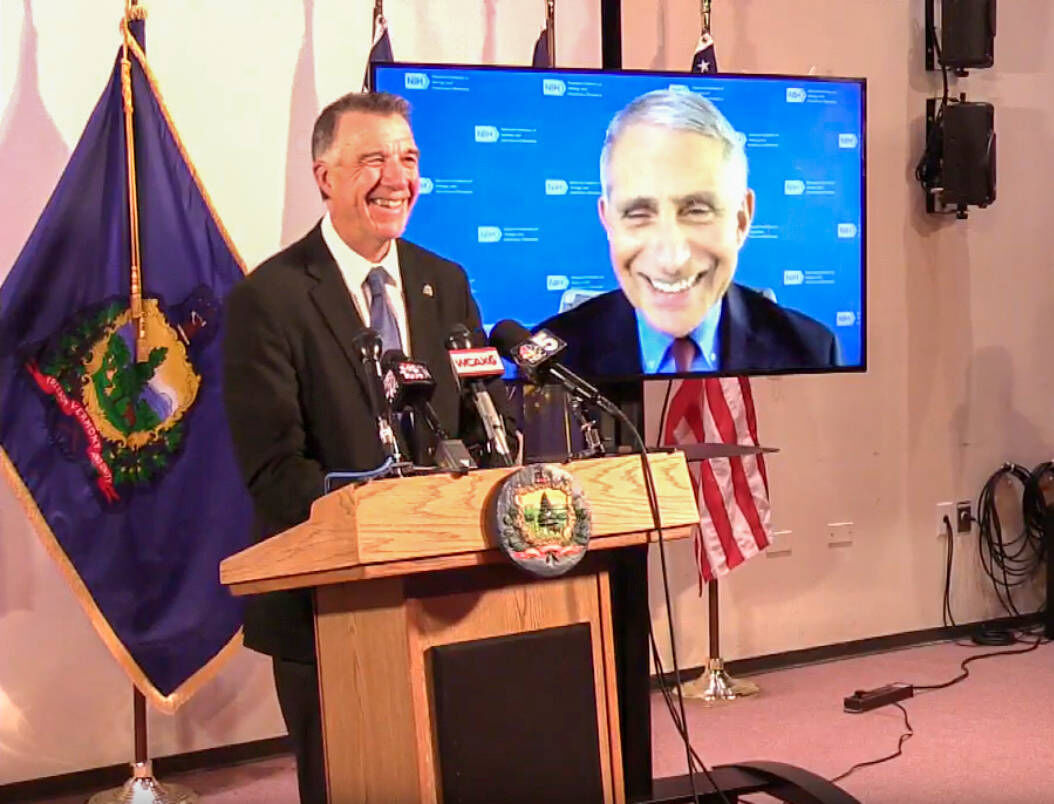 Gov. Phil Scott and Dr. Anthony Fauci share the stage and a smile during a press conference Tuesday morning.

Gov. Phil Scott and Dr. Anthony Fauci share the stage and a smile during a press conference Tuesday morning.

Dr. Anthony Fauci, director of the National Institute of Allergy and Infectious Diseases and a member of the White House coronavirus task force, complimented Vermont on its success in controlling the coronavirus but warned residents to stay on guard.

Fauci was a special guest and virtually attended Gov. Phil Scott’s press conference Tuesday morning to update the state on the pandemic. Fauci said the state and its residents could be held as a model for having developed a successful plan to slow the spread of the virus and reopen its economy as well as having residents that followed the safety recomendations.

Despite Vermont’s success, that Fauci said was not just attributable to its low population density, he warned the state to not become complacent.

“At the same time that I’m giving kudos to Vermont for doing so well, the message that I’d like all the citizens of the state to hear is that this virus is a formidable foe,” said Fauci when asked about the necessity of safety protocols in location like the Northeast Kingdom with such low COVID-19 case counts. “You give it an opportunity to reemerge its ugly head, whether you are in the beautiful rural area of Vermont or in the middle of Manhattan or the Bronx, that virus is going to take advantage of that.”

“So please, you’ve done so well don’t let your guard down because if we do we are going to see surges that are going to put us back to where we were months and months ago,” added Fauci. “This becomes particularly important as we enter the colder season of the fall and winter.”

During the press conference, Fauci was encouraged to visit Vermont and the Northeast Kingdom to take advantage of its relative safety.

“We are grateful for your taking the time to speak to Vermonters – reinforce what we’re doing,” said Scott. “I give all the credit to Vermont and the people of Vermont for our success but I thank you for reinforcing that and we look forward to you coming up here to visit and explore the Northeast Kingdom – we will give you one of those maple creamies when you do come up. And if you need a place to bring your family that’s safe, you know our numbers.”

Fauci spoke on a number of other topics, including vaccine development progress, rapid testing, and the challenges of navigating a crisis like this amid a divisive and politicized social climate.

Fauci referenced the importance of masks and distancing, noting the public may not know if a visitor is from a region with a high infection rate and a potential risk.

“Be courteous and welcoming but you also want to have a degree of protocol that I think safeguards not only the people who visit but certainly the inhabitants and the people that do live in Vermont.”

Later in the press conference Health Commissioner Dr. Mark Levine indicated a spate of 7 cases that were identified in Orleans County in recent days does not appear to have been connected.

Levine said publicity last week about the cases resulted in the Health Department receiving a tip about an event that might be a possible connection but it doesn’t appear to be the case.

“We have not yet found, again, any linkage or anything that would tie that all together,” said Levine. “In the last … at least 4 days, we have not seen any Orleans County cases additionally either, because we were kind of intrigued as you were with the fact that there had been a number of them.”

“I’m heartened by the fact that no more have popped up,” said Levine, and explained that sometimes what appears to be a cluster of cases has no discernible connection.