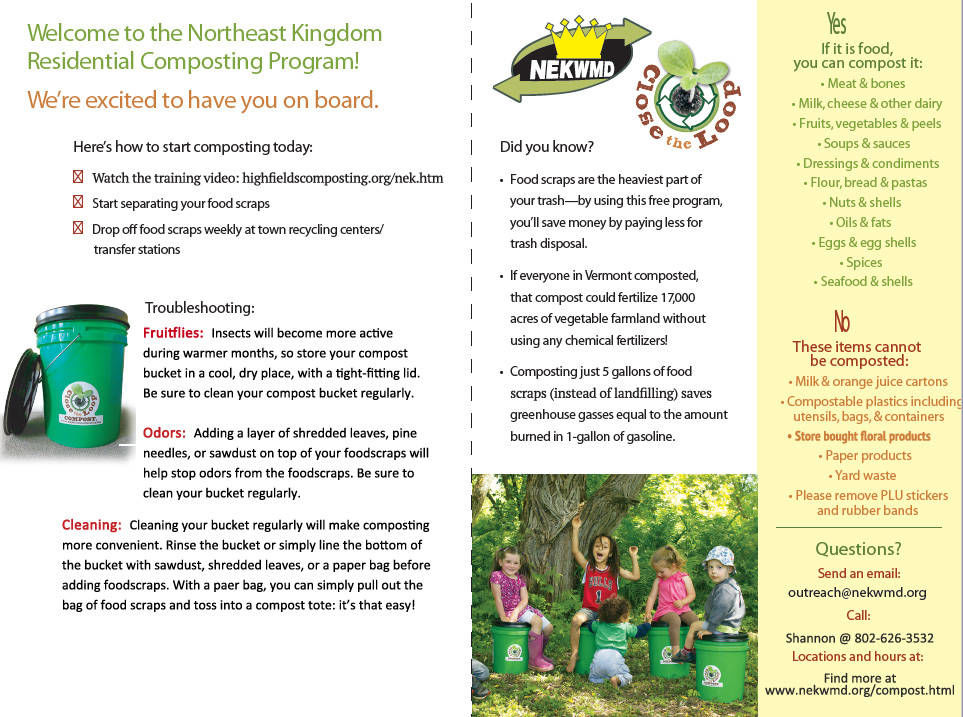 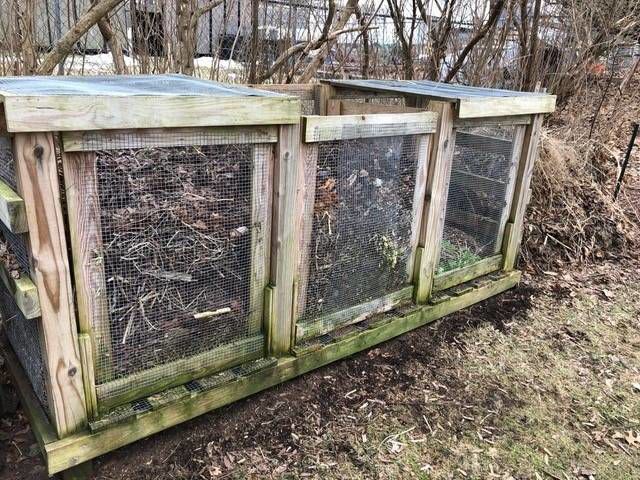 UVM and UNH offer a video online on how to make your own backyard composter.

UVM and UNH offer a video online on how to make your own backyard composter.

July 1 is a time for celebration for the U.S.’s northern neighbor. It’s Canada’s birthday.

And it’s a fun day around the world. It’s International Joke Day.

But in Vermont, July 1 is no laughing matter. It’s all about garbage.

Today is the first day that it’s against the law in Vermont to put organic waste, better known as food scraps, out with the trash.

Vermont has already mandated recycling, with some success, and is now attempting to reduce what else goes into a landfill. Food waste makes up 20 percent of what’s left.

Obeying the law will be more challenging in rural Northeast Kingdom because trash haulers are exempt from picking up separated food scraps.

Backyard composting or collecting and dropping off food scraps at the transfer station will be no surprise for some folks in the NEK.

Most towns here belong to the Northeast Kingdom Waste Management District where collecting compost has been underway in some towns for a decade - and it’s free.

“We’ve been collecting compost since 2007,” says Paul Tomasi, executive director of NEKWMD based in Lyndonville.

“Transfer stations were required to provide the service in 2017,” and all those in the NEKWMD are compliant, Tomasi stated.

The ban on throwing out food scraps begins today, but there are no food scraps police, says Shannon Choquette, outreach coordinator with NEKWMD.

“You won’t see anyone from the state coming to look in the trash.”

And it will be a challenge for some people, who live where they can’t easily do backyard composting, can’t travel to a transfer station or don’t have one nearby.

A list of compost locations in the district are at http://nekwmd.org/pdf/NEKcompostlocations.pdf.

“Some communities only accept recycling and do not accept food scraps” in the NEKWMD, and also in other towns, Choquette said.

That’s true in Newport City, which has a recycling center and is not obligated under law to provide composting. People are encouraged to go to the landfill in Coventry and pay a $5 fee per five-gallon pail to drop compost there.

Choquette said some communities don’t offer compost collection because it is an added expense for the municipality but are discussing it.

“I will be curious over the next few weeks how much of an increase there is,” she said.

What Are Food Scraps?

Food scraps are basically whatever puts the organic smell in garbage.

It’s whatever is left over from preparing a meal or in leftovers that can’t be enjoyed the next day: from vegetable and fruit peels and seeds to organic waste like meat and bones, seafood and fish, dairy, soups, sauces and condiments, oils, fats and eggs and shells, spices, flour and breads.

People who compost in their back yard put everything but meat and bones or oily foods in it and are allowed then to throw those scraps out in the trash.

Collecting food scraps is easy and there are plenty of tips on line about how to reduce smells and manage it. Some people who don’t have much actually freeze it in old yogurt containers until it goes into the compost bucket to empty at the transfer station.

The important thing is a tight fitting lid and some dry material like paper or leaves to keep the bottom clean.

“I keep an old bucket under the sink,” Choquette says.

Choquette says NEKWMD has plenty of information online and in newsletters for safe and easy composting or collection.

The district sells inexpensive backyard composters for $50, and have had a lot of orders lately, Choquette said.

“And there are so many do-it-yourself options,” she said.

“I just don’t think it’s worth spending over $200 for a composter.”

A University of New Hampshire Extension Service video on turning compost into great garden soil is available at https://www.facebook.com/AskUNHExtension/playlist/1069125003468156/

The trick is to use the right mix of materials and rotate it so it will become soil. If done right it will not smell or attract animals.

Tenants in larger apartment buildings will likely have a harder time with composting, especially those who don’t drive.

Every apartment building will have a different way of handling it, with landlords required to provide tenants with safe composting containers and options, but not to guarantee compost pickup by haulers, Choquette says.

“The state recognizes that the biggest component … is a behavioral change that’s easier for some people than others.”

“Certainly some people will dispose of it in trash in the beginning. Over time I’m hoping they will change as they see neighbors and family members do it, when it’s easy and widely accepted.”

People will compost because it’s good for the soil or because it saves money, she said.

Some will do it because it’s the law, she said. And many won’t, just like they don’t recycle.

“Some people are not going to follow the law no matter what it says,” Choquette says.

The goal is for 60 percent of Vermonters to compost.

“It will look very different in three to five years than it does now.”