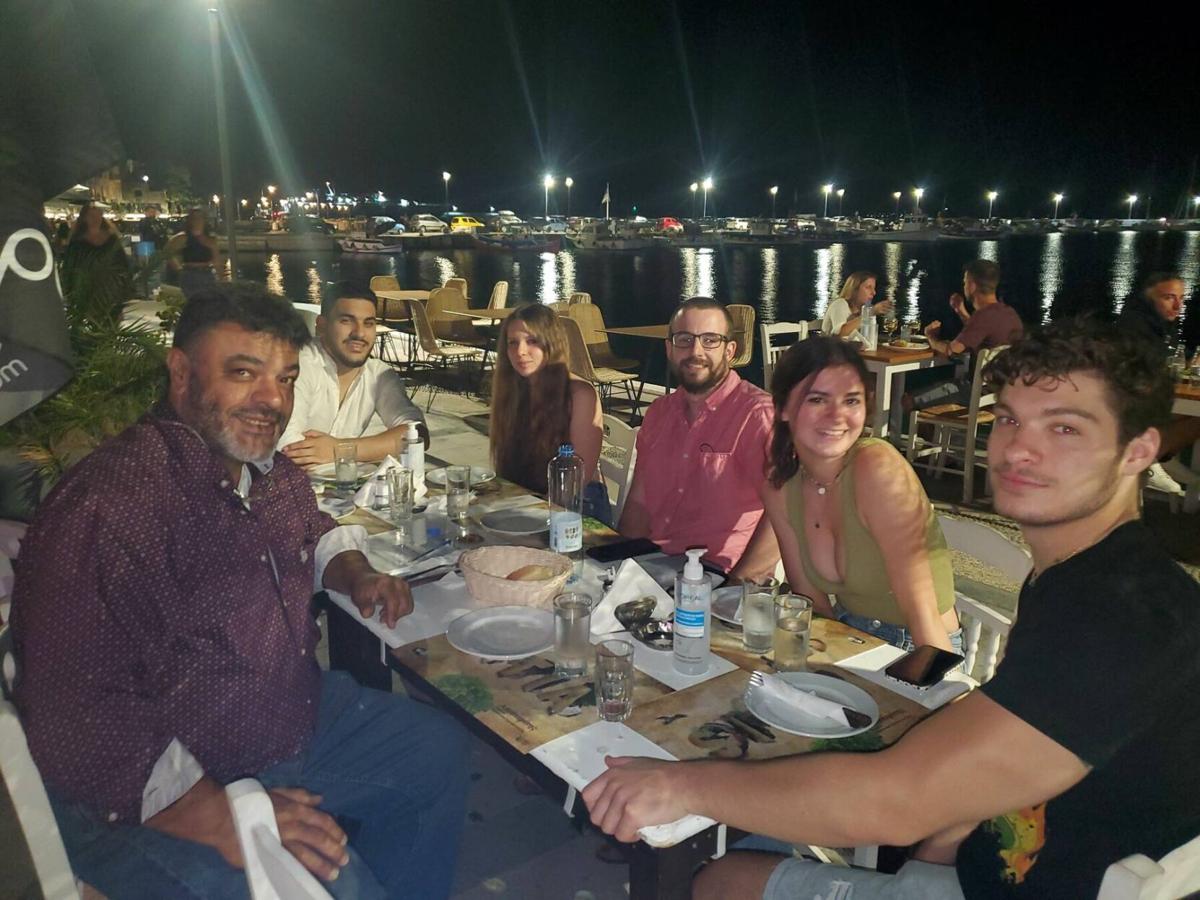 In an expression of gratitude, Jim Sourgiadakis, owner of Gold House of Pizza in Littleton, recently took his employees on a week-long trip to the island of Crete in Greece. At dinner, left to right: Sourgiadakis; his eldest son, Mihail; Bailey Reed; Sam Sibulkin; Mya Browne; and son, Chris. (Courtesy photo) 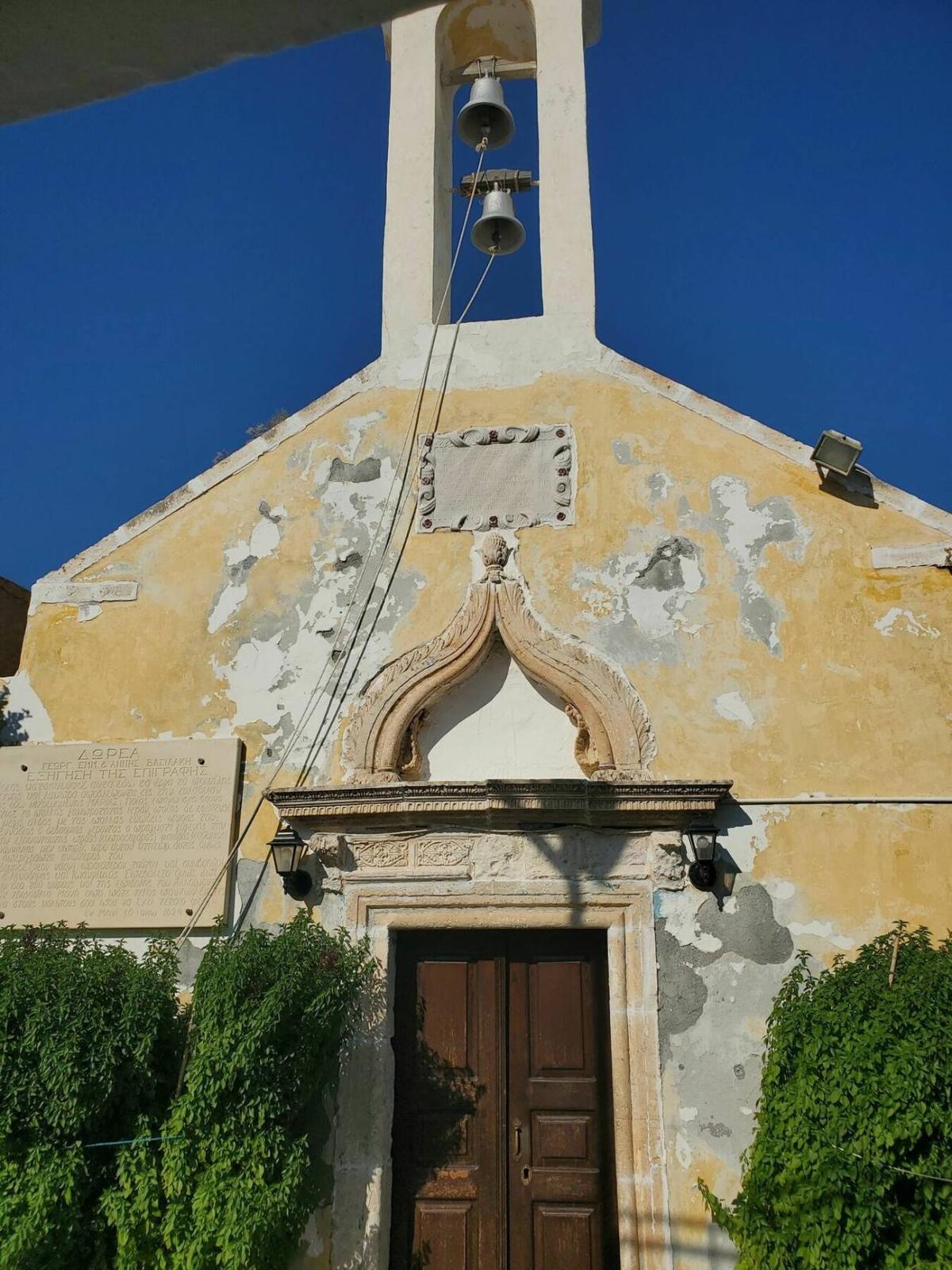 In an expression of gratitude, Jim Sourgiadakis, owner of Gold House of Pizza in Littleton, recently took his employees on a week-long trip to the island of Crete in Greece. They made visits to scores of churches and sacred places, among them the Toplou Monastery. (Courtesy photo)

In an expression of gratitude, Jim Sourgiadakis, owner of Gold House of Pizza in Littleton, recently took his employees on a week-long trip to the island of Crete in Greece. At dinner, left to right: Sourgiadakis; his eldest son, Mihail; Bailey Reed; Sam Sibulkin; Mya Browne; and son, Chris. (Courtesy photo)

In an expression of gratitude, Jim Sourgiadakis, owner of Gold House of Pizza in Littleton, recently took his employees on a week-long trip to the island of Crete in Greece. They made visits to scores of churches and sacred places, among them the Toplou Monastery. (Courtesy photo)

They were there for him during years of busy work weeks and during the challenge and uncertainty of the COVID-19 pandemic in 2020.

And Jim Sourgiadakis, their boss and owner of Gold House of Pizza, was there for them.

In an expression of gratitude, Sourgiadakis closed his shop for a week and took four of his longer-term employees on an all-expenses-paid, weeklong trip to his native Greece.

They returned on Sunday.

“We’ve been talking about this for a few years,” Sourgiadakis said Thursday. “It just wasn’t in the cards at the time, and then all of a sudden COVID hit.”

As the pandemic worsened last year, he asked his employees what they wanted to do in terms of working at the shop.

“I said do you guys want to close down for a couple of weeks until this thing passes?” said Sourgiadakis. “The first thing they said is if you can afford to pay us, we would rather work. So they stayed here, they worked, and they probably could have stayed home and made more. I thought it was up to me to show my gratitude.”

Although Sourgiadakis will occasionally shut down for a day and take his team to the beach, the trip to Greece was the first of its kind for the Gold House team.

The group spent the week on the east side of the Island of Crete, visiting all kinds of beaches and restaurants, staying in the city of Sitia, making excursions to scores of Greek Orthodox churches and monasteries steeped in history, including the Toplou Monastery, and visiting Sourgiadakis’ nearby native village of Skopi.

In Sitia, he booked a hotel.

“All they had to do was walk downstairs to all the restaurants and bars and the beach was right there,” said Sourgiadakis.

Crete is the largest island in Greece and sits in the warm, clear Mediterranean Sea, which is also one of the saltiest seas in the world.

“Old ladies with bedsheets will walk into water and put the bed sheet in and go back and forth in the water, go home, let it dry, throw it on the table, and that’s your salt,” he said. “We can scoop salt off the rocks.”

The Gold House team in Crete were invited to dinners by some of Sourgiadakis’ friends and relatives they met on the island.

“The people there are just so good,” said Sourgiadakis.

They began their morning with coffee and enjoyed outdoor restaurant seating beside the ocean and fresh food right from the island, including fruits, vegetables, seafood, and whole fish cooked however a diner wants it.

“Crete has the best beaches in all of Greece, and they have the most of them,” said Sourgiadakis. “The east side is known for its olive oil and has the best olive oil in the world. It comes from tiny olives. Everywhere you go are olive trees.”

Going forward, he would like to make a similar trip every few years for his employees.

“That was the name of the game — to get out of the norm, have some fun, relax, see something different, a way of life in a different country,” said Sourgiadakis.

Going on the trip to Greece was Sourgiadakis, his sons, Mihail and Chris, who work with their father, and Littleton Gold House employees Bailey Reed, Mya Browne, Samuel Sibulkin and Kostas Koxarakis, as well as Sourgiadakis’ cousin who owns the Gold House of Pizza shop in Berlin.

A fifth Littleton Gold House employee was given the opportunity to go, but couldn’t go because she had to stay here during that time.

For Reed, Browne and Sibulkin, it was their first journey to Greece.

They packed a lot into one week.

“It’s a beautiful place, the scenery, all of it,” said Sibulkin. “It was hardly cloudy the whole time we were there. There were sunny, blue skies and crystal clear water. The food was amazing, delicious. I tried everything — you have to. I had a great time.”

Sibulkin has worked at Gold House for about seven years.

“We’ve been wanting to do it for a while,” he said. “I started talking to Jimmy about it four years ago. Every year we talked about it, but it never really came through. We were going to go last year, but everything happened. This was our year and we were able to go.”

Not many employers are as generous as Sourgiadakis, said Sibulkin.

“Jimmy very much shows that he appreciates his employees,” said Sibulkin. “He gets rewarded because we’re loyal to him and we get rewarded because he’s loyal to us. I’m grateful for everything he did for us, and I know the other employees are, too. Hopefully, we’ll be doing it again.”

Great story, thanks for sharing! Gold House is my go-to for my weekly pie, glad they are back and enjoyed themselves, my stomach missed them! Try a large green pepper, mushroom and extra cheese next time you want a pizza! YUM!