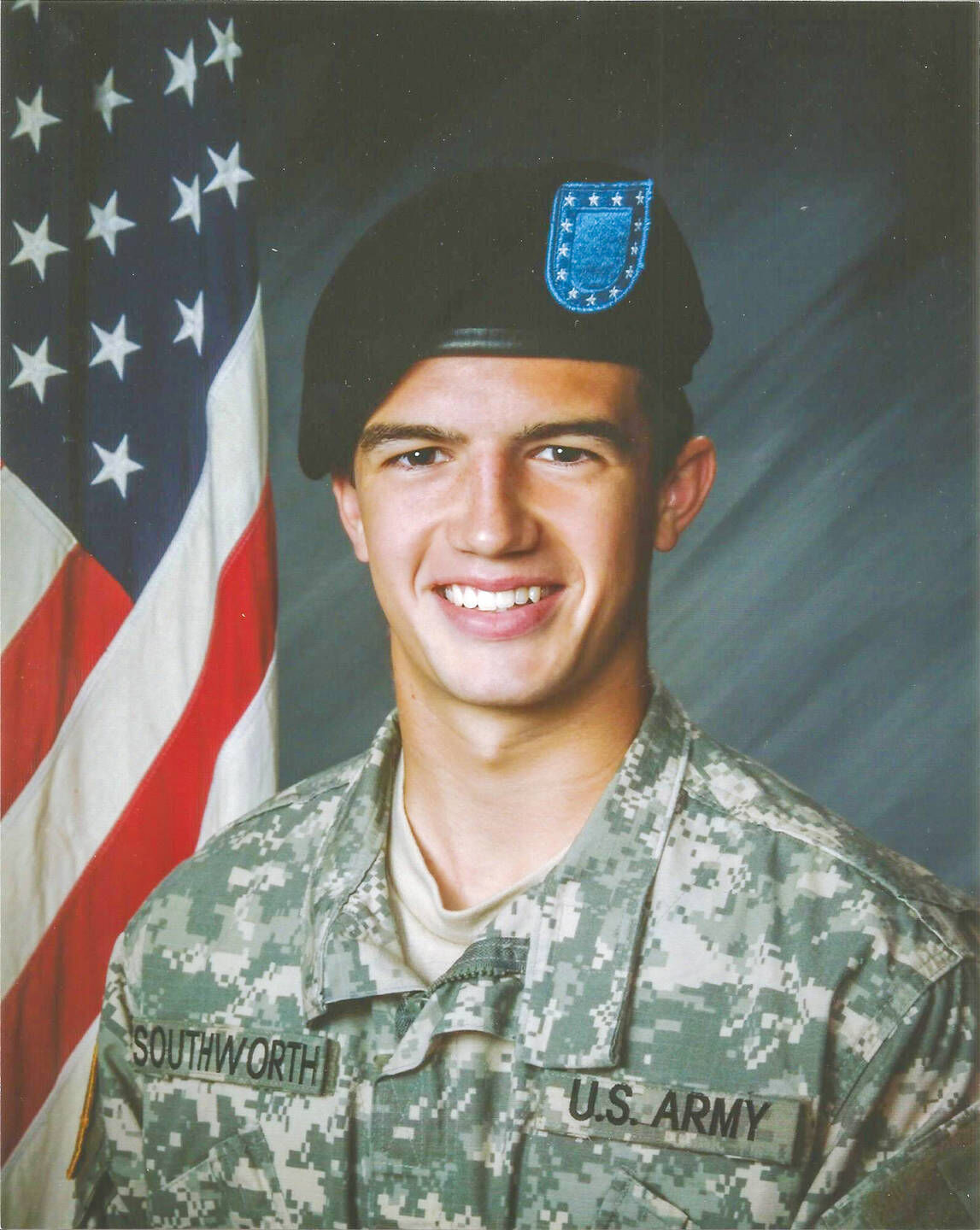 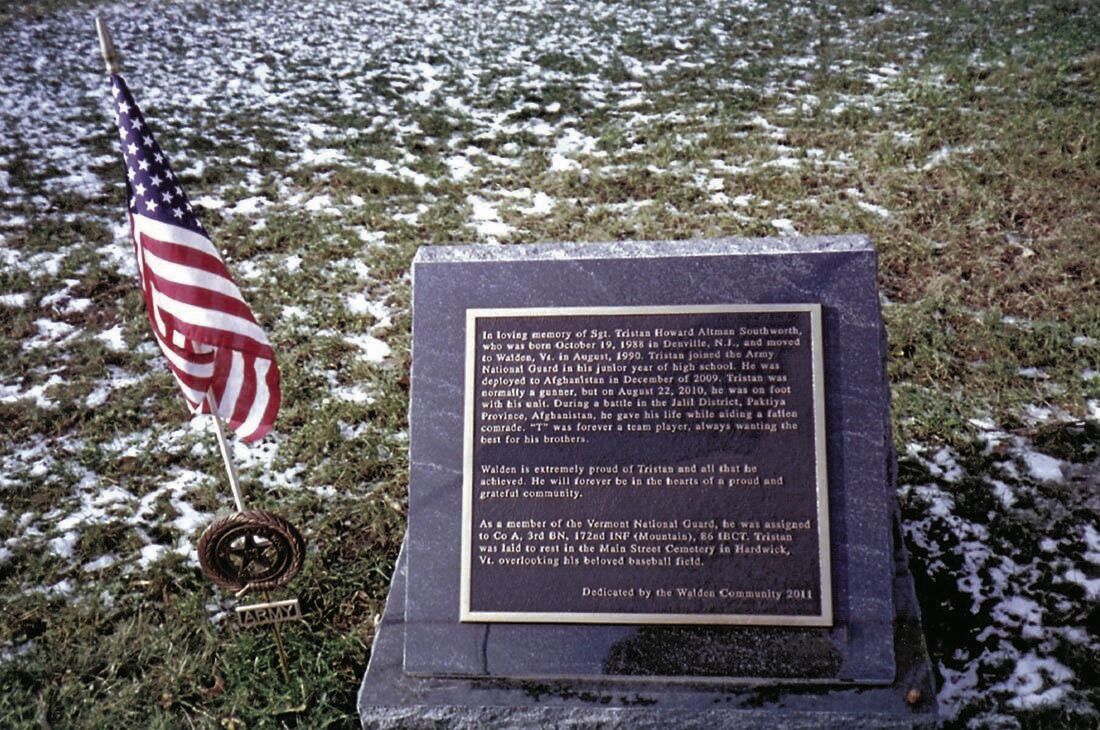 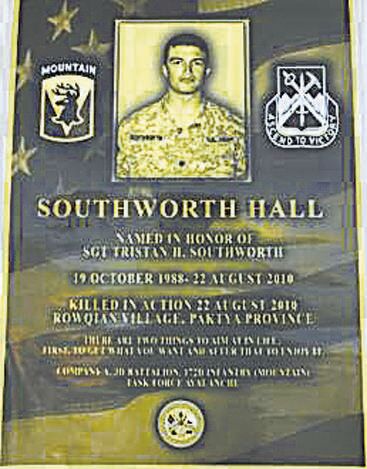 This is a photo of the plaque to be displayed at a building at Bagram Airfield dedicated to the memory of U.S. Army Sgt. Tristan Southworth, who was killed in combat in Paktya province, Aug. 25, 2010. Southworth was honored at a building dedication ceremony by his fellow soldiers from Company A, 3rd Battalion, 172nd Infantry Regiment, 86th Infantry Brigade Combat Team. (Contributed Photo by Staff Sgt. Whitney Hughes)

This is a photo of the plaque to be displayed at a building at Bagram Airfield dedicated to the memory of U.S. Army Sgt. Tristan Southworth, who was killed in combat in Paktya province, Aug. 25, 2010. Southworth was honored at a building dedication ceremony by his fellow soldiers from Company A, 3rd Battalion, 172nd Infantry Regiment, 86th Infantry Brigade Combat Team. (Contributed Photo by Staff Sgt. Whitney Hughes)

Gov. Phil Scott closed out his Friday media briefing by highlighting the importance of Memorial Day and recalling the sacrifice of Tristan Southworth and a meeting with the fallen soldier’s family this week.

On Thursday Scott attended a re-dedication of the Fallen Heroes Memorial at Camp Johnson, which commemorates the 14 members of the Vermont National Guard who lost their lives during the Global War on Terror.

“After the event, I spoke with the parents of Sgt. Tristan Southworth of Walden. Sgt. Southworth was one of the 14 members we honored yesterday,” said Scott. “He lost his life in 2010 at the age of 21 while trying to save a fellow soldier in Afghanistan. Among others, he was awarded the Bronze Star after his death.”

Scott shared that Southworth will be one of 43 fallen soldiers honored this Sunday at the Coca Cola 600 NASCAR race in Charlotte, N.C., at which the 43 race cars will have the name of a fallen hero on the windshield. Southworth will be memorialized on the #17 car driven by Chris Buescher.

“I know this means a lot to the family so I want to thank former Vermonter Steve Phelps, president of NASCAR, for making this happen,” said Scott.

“We live in freedom today thanks to people like Tristan and it is important we don’t forget how they lived, just as well as how they died. It’s more than just names and dates on memorials,” said Scott. “I know those who step up to serve don’t do it for the glory or fame. They serve for their country and they do it for us. So this Memorial Day let us remember all those heroes who never came home and their loved ones they left behind. We can never do enough to honor them or their memory. If you run across a family who has lost a loved one or even run across a veteran this weekend, take a moment to thank them and their families for their sacrifice and all they’ve done to protect us.”

He was a 2007 Hazen Union graduate and a three-sport standout excelling in basketball, baseball and soccer. Tristan’s dedication and ambition as the teams’ starting point guard led the Wildcats team to deliver the Division III basketball title to Hazen in 2006. Tristan held the rank of a specialist when he died, but he was given a posthumous promotion to the rank of sergeant. Other military honors including a Bronze Star, Purple Heart and Combat Infantry Badge were presented to Tristan’s family in honor of his service. “He was a star,” said his former basketball coach Aaron Hill. “If you thought about the best kid you’ve ever met in terms of character and integrity, he’d be the first one you’d think of.”

Tristan left behind his parents, Michael and Julie Southworth of Walden, and two younger brothers, Robert and Matt.