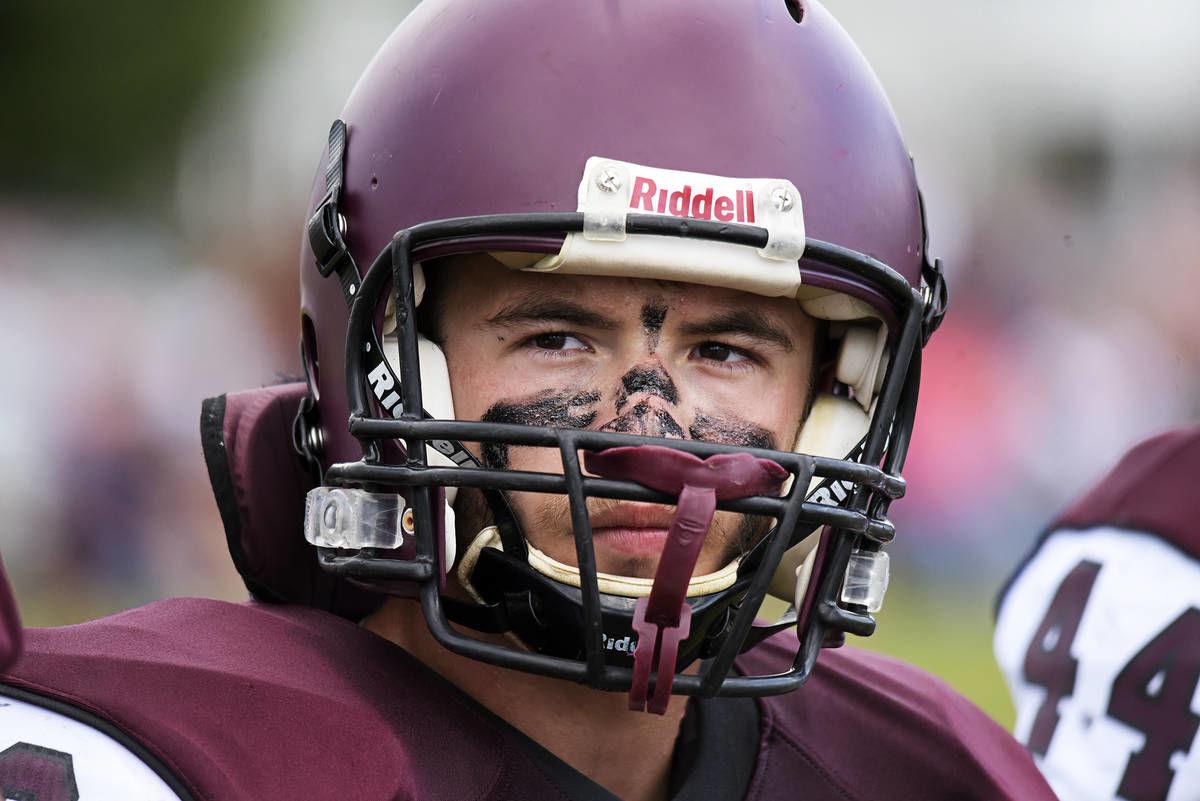 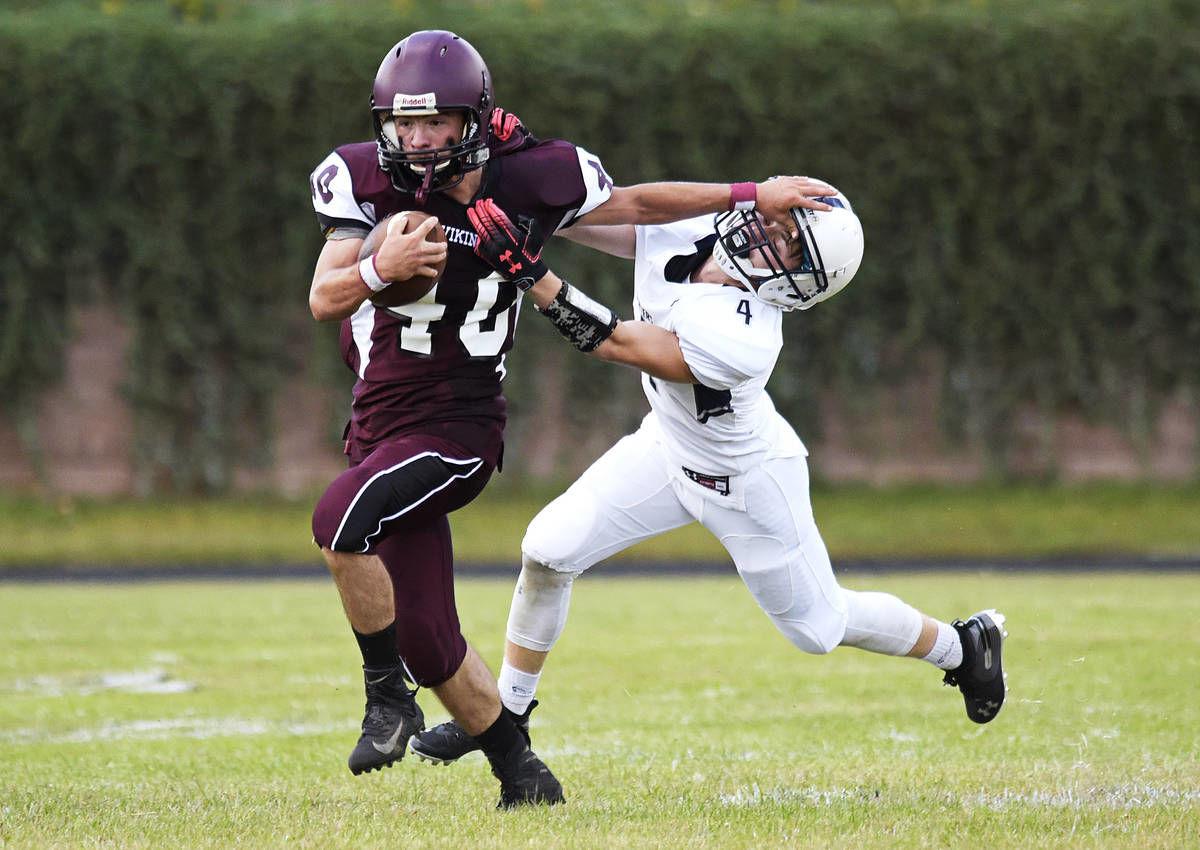 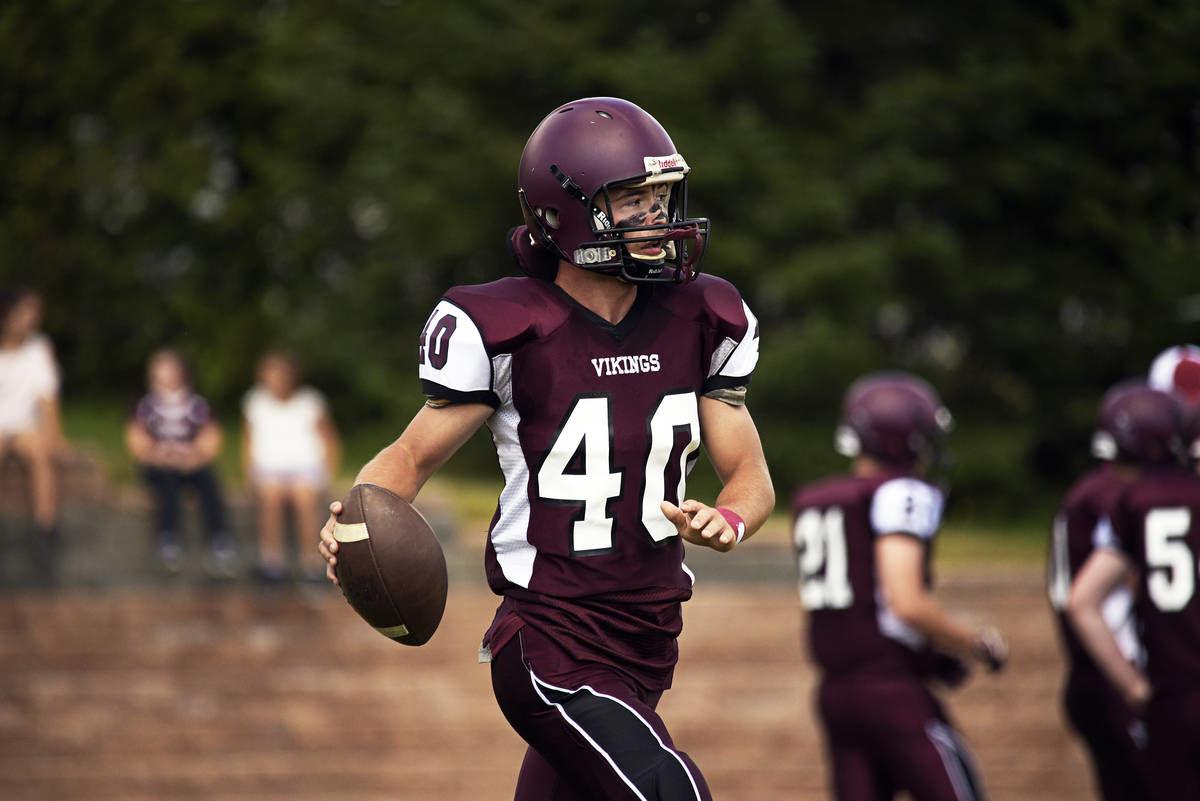 Lyndon Institute junior Peyton Barlow warms up before a game against Fair Haven at Robert K. Lewis Field on Saturday, Sept. 7, 2019. Barlow resumed playing football this fall after being diagnosed and treated for a heart condition earlier this year. (Photo by Paul Hayes) 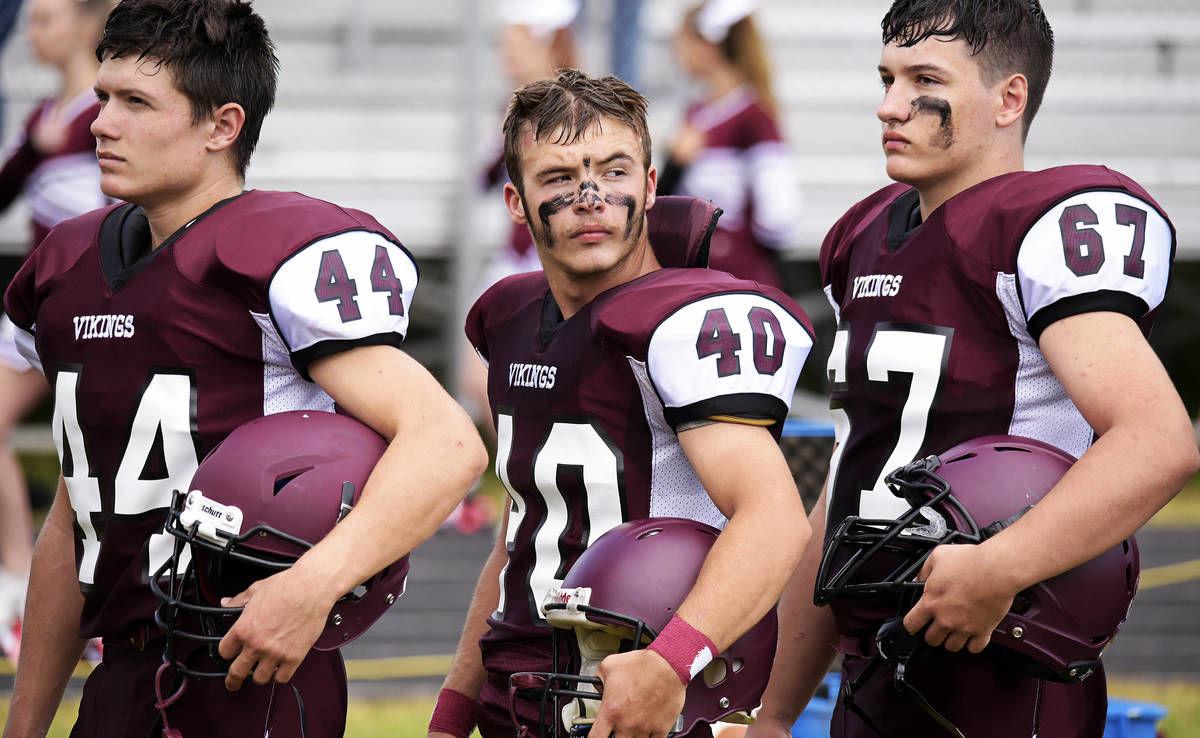 Lyndon Institute junior Peyton Barlow lines up with teammates before a game against Fair Haven at Robert K. Lewis Field on Saturday, Sept. 7, 2019. Barlow resumed playing football this fall after being diagnosed and treated for a heart condition earlier this year. (Photo by Paul Hayes) 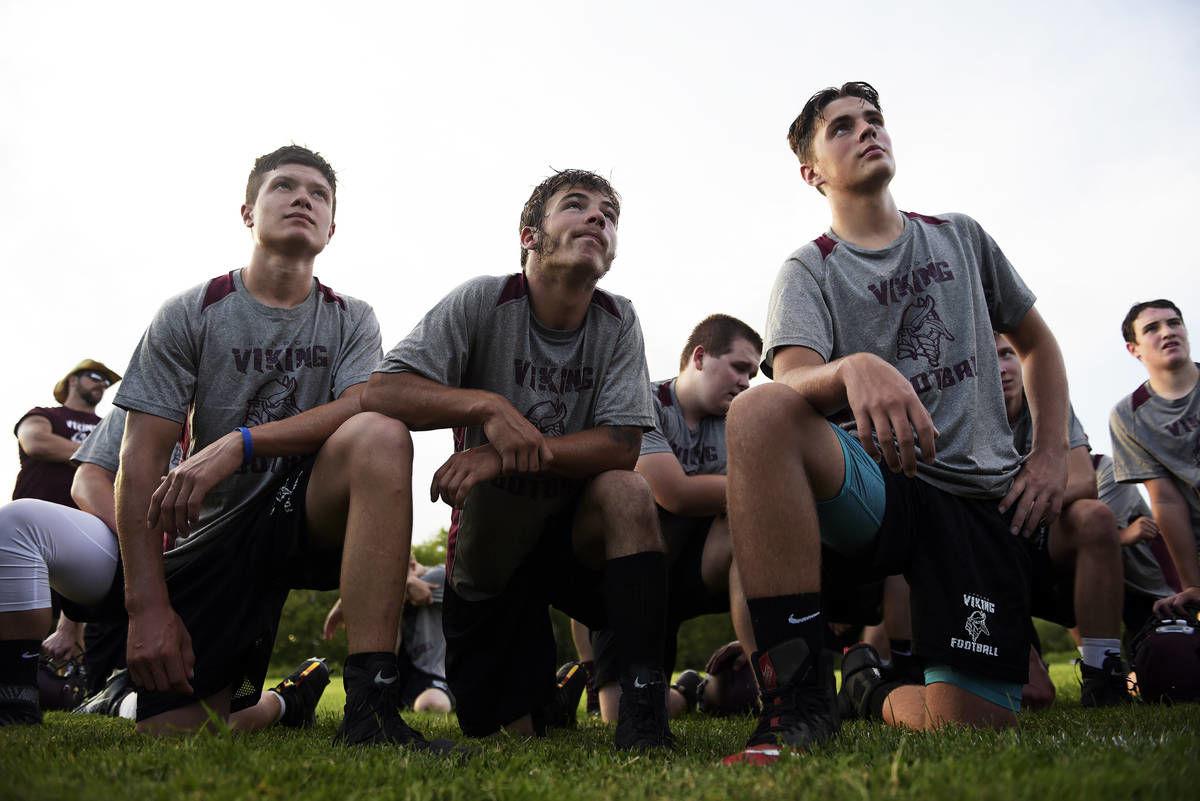 Lyndon Institute junior Peyton Barlow warms up before a game against Fair Haven at Robert K. Lewis Field on Saturday, Sept. 7, 2019. Barlow resumed playing football this fall after being diagnosed and treated for a heart condition earlier this year. (Photo by Paul Hayes)

Lyndon Institute junior Peyton Barlow lines up with teammates before a game against Fair Haven at Robert K. Lewis Field on Saturday, Sept. 7, 2019. Barlow resumed playing football this fall after being diagnosed and treated for a heart condition earlier this year. (Photo by Paul Hayes)

Near the end of Lyndon Institute’s 36-0 loss to Fair Haven last weekend, Peyton Barlow reappeared on the Vikings’ sideline, his right arm in a sling.

The compact 5-foot-6, 140 pound running back had gone to the hospital after a first quarter play where four bigger guys had fallen on top of him, driving his shoulder into the turf.

“All of that weight, which was probably 800 pounds at that point, landed on me,” he said, “and I heard my shoulder go ‘Crunch.’”

He suffered significant bruising and swelling which will likely keep him out several games. No recovery timetable has been set yet. On a scale of one to 10, he rated the pain “an eight.”

It’s a frustrating development for Barlow, a third-year varsity junior. But it’s nothing compared to what he’s already been through.

Earlier this year, Barlow was diagnosed with Wolff-Parkinson-White Syndrome, a problem with the heart’s electrical system.

At first, there were concerns he’d never play sports again. He endured months of uncertainty about his health, was put through numerous tests, and eventually had surgery to fix the issue.

After all of that, he returned to the gridiron this fall.

So a shoulder injury? Don’t expect it to keep him out for long.

“Once it’s good enough, and I can raise [my arm] above my head and move it a little bit more, then I’ll put my pads back on,” Barlow said. “And I’ll just try not to hit with that shoulder.”

Barlow had always been an active, healthy kid. The youngest of two siblings, he grew up playing baseball and football. He’s an avid hunter and holds a black belt in taekwondo. He briefly tried basketball, saying “I played for one year until I figured out you couldn’t tackle people, so I called that quits.”

But on the morning of March 18, while attending a school assembly, he was suddenly stricken.

“It felt like I was blacking out. Everything went numb and my right arm felt like it was soaked,” he recalled. “I almost got up and walked out, but I figured I might pass out, so I just stayed there.”

Not wanting to create a scene, he quietly willed himself through the episode. But afterwards, at lunch, the sensation returned. He went to the school nurse, who figured he was dehydrated.

“I thought ‘That could be,’ because I don’t drink water, all I drink is Pepsi,” he said.

Four days later, he woke in the middle of the night with the same symptoms. His father, Paul, took him straight to Northeastern Vermont Regional Hospital where doctors quickly determined the problem — Wolff-Parkinson-White Syndrome.

The rare heart condition is caused by extra electrical pathways between the heart’s upper and lower chambers. It usually first appears in people in their teens or 20s. Common symptoms include a rapid, fluttering or pounding heartbeat, dizziness or lightheadedness, shortness of breath, fainting, fatigue and anxiety.

From NVRH, Barlow was taken to Dartmouth Hitchcock Medical Center in Hanover for additional testing.

Meanwhile his mother Loretta was out of state, tending to an urgent family matter. She followed her son’s progress from afar.

She recalled one moment in particular that troubled her son. “I know when they told [Peyton] he might never play sports again, you might as well have ripped his heart out right there.”

Added Barlow about the doctors dire warning, “That scared me.”

After testing was done, he was cleared to play. He jumped at the chance, despite his parents’ reservations.

“The doctor assured us the chances of him dying from this were very slim, but we’re looking at him like ‘It’s not your kid.’ I was very nervous about him doing sports,” said his mother. “But he wasn’t going to let it hold him back.”

Outwardly, Barlow was the same upbeat, high energy player he’d always been. But inside he wrestled with his heart condition, frequently experiencing symptoms.

Throughout the spring, baseball was more than a game. It was a distraction from his health concerns.

His teammates, family and friends formed a support system that helped him through the toughest times.

“When that was going on I hung out with my friends all day, every day,” said Barlow, noting he developed a greater appreciation for life. “Something just rang a bell in my head, like, I just realized that one day I may not even wake up.”

“Every night when I went to bed, that’s what I thought about, was waking up.”

The surgery happened on June 12. The extra electrical pathways were destroyed. Barlow emerged more determined than ever to pursue his passions.

His first order of business: Enter the demolition derby at the Caledonia County Fair.

“My mom did not want that to happen. I said ‘I get hit harder in football than I will in a car’ and she said ‘You ain’t doing it.’ Well, I did it. She didn’t like that,” he said. “I was the third one out. I think I was in there for four minutes and 23 seconds.”

Even more, he looked forward to the fall, and the start of football season.

Barlow comes from a football family. He attended LI games with his older sister, Krista, during the team’s run to the 2013 state championship. He has played since elementary school, leading the Lyndon Youth Vikings to an unbeaten season in sixth grade and NVYFL D-II runner-up finishes in grades seven and eight.

After his surgery, he wondered if he could still perform at a high level.

“That was actually a big part in my mind: Was I going to be able to play football?” he said.

When practices began, he was pleasantly surprised at how he felt

“When I first started, I was hoping my heart wasn’t going to blow up. It was kind of sketchy, because I hadn’t really gone full tilt yet,” he said. “It’s kind of nice getting back to what I was doing.”

Playing bigger than his stature, Barlow had assumed a leadership role this year on a young Vikings squad, setting the tone with his preparation, energy and intensity.

“He’s got a lot of intestinal fortitude. He’s got some guts. He’s got some grit,” said LI Head Coach Chad Simpson, comparing Barlow’s qualities as a football player and a demo car driver. “Even if there’s just one wheel spinning, he’s gonna go until he can’t move or the engine ain’t firing. He’s going to do everything he can.”

Barlow was still wearing a sling on Monday morning.

His range of motion was limited and his shoulder couldn’t bear any weight, but he was already planning his comeback.

He chalked it up to stubbornness. It’s a trait he says he gets from his parents, particularly his father, who was also a pint-sized rusher for the Vikings.

“I’ve always been like this,” said Barlow, recalling his seventh-grade season when he played through a torn hamstring, despite the fact it “hurt like hell.” He recalled, “If you could have seen me then, I was hobbling across the field, just trying to run.”

Even when he got hurt against Fair Haven, he refused to stay down and wait for the trainer. He walked off the field under his own power, “If I can get up and walk off the field, I’m going to.”

But it’s not stubbornness alone.

Barlow has a new outlook since his health scare. His appreciation for the everyday things — playing sports, going hunting, spending time with family and friends — has deepened.

Now he wants to get back on the field, do his part, and enjoy every minute of it.

He knows that life can change at any moment, he doesn’t plan on letting it pass him by.

Said his father, “I think he realizes what he has, and he wants to make the most of it.”